How the ‘durian of soup’ became the hippest dish in China

But it’s rare for an odorous dish to become a national favorite, which is exactly what’s happened with luosifen, now one of the hottest food trends in China.

Just like the notorious durian fruit, this snail-based rice noodle soup dish has created a buzz on Chinese social media thanks to its infamous smell. While some claim the scent is mildly sour, others say it should be classed as a bioweapon.

Despite having the word “snail” in its Chinese name, actual snails don’t commonly appear in the dish, but are used to flavor the broth.

“It only takes three bowls to get you hooked,” Ni Diaoyang, head of the Liuzhou Luosifen Association and director of the Luosifen Museum in the city, tells CNN Travel proudly.

For a Liuzhou local like Ni, beyond the initial stench, a bowl of luosifen is a delicious concoction with rich and complicated flavors – sour, spicy, savory and succulent.

In the past, it would have been hard for non-locals to share Ni’s enthusiasm for this strange regional dish – or even to try it. But luosifen’s magic has unexpectedly spilled beyond its birthplace and overtaken the entire country, thanks to a DIY ready-to-eat form.

Pre-packaged luosifen – which many describe as the “luxury version of instant noodles” – usually comes with eight or more ingredients in vacuum-sealed packets.

Sales soared in 2019, leading it to become one of the best-selling regional snacks on Chinese e-commerce sites like Taobao. State media reported 2.5 million luosifen packets were produced daily in June 2020.

“I have to say it has an impressive consistency and quality control in flavors – even better than some local store made ones,” she adds.

Global brands like KFC are also latching onto this huge food trend. This month, the fast food giant rolled out new take-away products – including packaged luosifen – to appeal to young eaters in China.

The science behind 'the breath of a wok,' an essential ingredient in the perfect bowl of fried rice

While the Covid-19 pandemic almost obliterated the restaurant industry worldwide, the crisis turned out to be a blessing for luosifen makers.

Years before the pandemic began, noodle makers in Liuzhou were brewing an idea to take a different path from those exporting local specialty foods to other parts of China by opening chain restaurants or shops, such as Lanzhou hand-pulled noodles and Sha Xian Xiao Chi – or Sha county snacks.

The ubiquity of chains offering these foods in branches all over the country is the result of deliberate efforts of local governments to turn their famous dishes into semi organized franchises.

A humble city in southwestern China, Liuzhou is a key base for the automotive industry, accounting for about 9% of the country’s total auto production, according to city government data. With a population of 4 million, the city is home to more than 260 car parts manufacturers.

By 2010, luosifen had already earned a following after being featured in hit culinary documentary “A Bite of China.”

Specialized luosifen chains started to pop up in Beijing and Shanghai. But despite some initial fanfare and a government push, in-store sales fell flat.

Then in 2014, Liuzhou entrepreneurs had an idea: Mass produce the noodles and package them.

At first, it wasn’t easy. The noodles, first made in shabby workshops, would only last for 10 days. Authorities cracked down on some workshops over hygiene concerns.

The setbacks didn’t slow the momentum in a city renowned for its assembly and standardization capabilities.

The rise of bubble tea, one of Taiwan's most beloved beverages

As more luosifen workshops popped up, the Liuzhou government started to regulate production and award licenses to factories that met certain requirements, according to state media.

Government efforts have led to more research and upgraded technologies in food prep, processing, sterilization and packaging. Nowadays, most luosifen packages on the market have a shelf life of up to six months, which allows people, near or far, to enjoy the same flavors with minimal preparation.

“In inventing the luosifen packages, Liuzhou people borrowed the ‘industrial thinking’ of the city,” Ni says.

From chow mein to udon: A beginner's guide to Asia's best noodles

Soul of the soup

While the snail may stand out as the most unusual ingredient in luosifen, local bamboo shoots are what give soul to the noodle soup.

Luosifen’s arguably off-putting scent comes from fermented “suan sun” – sour bamboo shoots. Despite being produced in a factory, every bamboo shoot packet sold with luosifen is handmade according to Liuzhou traditions, say manufacturers.

Bamboo shoots are highly prized in China, their crunchy and tender texture making them a supporting ingredient in many gourmet recipes.

But as bamboo grows fast, the taste window for its shoots is extremely short, which poses challenges for preparation and preservation.

To retain the utmost freshness, farmers in Liuzhou’s suburbs get up before dawn for the hunt. Aiming for the tip of the plant, as it’s just surfacing from the ground, they carefully cut off the shoots above the rhizome. Before 9 a.m., the plants are harvested and handed to the processing factories.

The bamboo shoots will then be unsheathed, peeled and slivered. The slices will sit in the pickling liquid for at least two months.

The secret sauce of pickling, according to Ni, is the mix of local Liuzhou spring water and aged pickle juice. Every new batch contains 30 to 40% of the old juice.

The ensuing fermentation isn’t just a waiting game. It also needs to be mindfully monitored. Seasoned “pickle sommeliers” are paid to sniff the “sour bamboo shoots” to track the fermentation stages.

Though it admittedly draws inspiration from convenience food, packaged luosifen shouldn’t be classed as such, says Ni. Instead, he prefers to refer to it as a “local specialty food,” because neither the quality nor the freshness has been compromised.

“Luosifen producers use spices – star anise, numbing peppers, fennel and cinnamon – as natural preservatives in addition to flavorings,” Ni says. “Depending on the recipe, there are at least 18 spices in the broth.”

Rather than adding flavoring powders, the luosifen broth – often condensed in packets – is created through protracted cooking processes, with bulks of snails, chicken bones and pig marrow bones sitting in rolling boils for more than 10 hours.

The elaborate process also applies to the rice noodles – the main character of the dish. From grinding grains to steaming to drying to packaging, it takes at least seven procedures carried out over two full days – already a largely shortened time thanks to automation – to achieve the foolproof “al dente” state.

However cooked, the noodles will turn silky and slippery, while setting off all the bold flavors in the bowl.

“People staying home now have higher expectations for convenience food. And it’s much more than filling the belly; they want to engage in a ritual to make something delicious,” Shi says.

The luosifen frenzy in China has been propelled by pop culture – including culinary shows, memes and mukbang videos.

One of the most watched videos featuring luosifen is by Li Ziqi, a Chinese blogger who showcases traditional cooking styles, with everything made from scratch and sourced from the pastoral, dreamy countryside.

Her luosifen video, which features her sawing off bamboo shoots and hand-catching river snails, has been viewed more than 53 million times on YouTube. 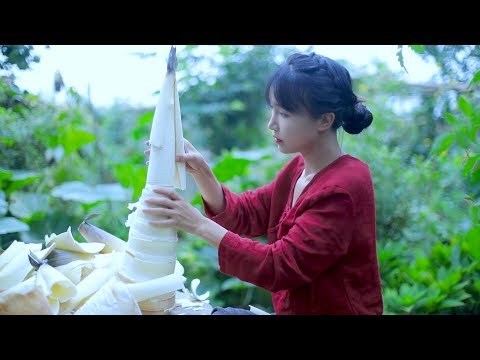 Li, an ambassador for traditional food culture, has even started her own luosifen brand. Her company, Hangzhou Weinian Brand Management. is now setting up a dedicated factory and securing a bamboo shoot farm for an exclusive supply, say representatives.

But even someone with as much clout as Li Ziqi is only cautiously eyeing the overseas market. Xiaodao Li, Li Ziqi’s brand director, says they don’t have any exporting plans at this stage.

“Luosifen is a dish dependent on the authenticity of the ingredients. We want to ensure the supply for the domestic market first,” he says.

“However, we’ve seen many foreign friends, who snub the idea at first, end up gulping up the entire bowl. So, we wouldn’t rule out the possibility to test the water in some regions.”

Indeed, having already taken China by storm, the dish is now gaining fans in the rest of the world.

According to the in-house research arm of Chinese e-commerce site Alibaba, packaged luosifen has already been sold to more than 100 countries or regions, while the local commerce authority reports that exports of the food skyrocketed in 2020.

The biggest challenge though, according a leading luosifen exporter, is to meet the various customs inspection requirements.

Yao Hanlin, chairman of luosifen brand Luobawang, says his company has to tailor recipes and techniques. For instance, the brand has developed a fish-based broth specifically for the US market, as the country bars certain animal-sourced ingredients.

For the Japan market, they have to source bamboo shoots that are free of a specific mineral element.

Yao says after clearing these customs hurdles, they are working to diversify the product to cater to more palates by adding tomato, numbing peppers and hot and sour flavors.