An airport at the end of the Earth

Almost 200 years ago, a British warship transported Napoleon Bonaparte to his exile on the island of St. Helena, a place from where it would be impossible for him to escape ever again.

Today, Bonaparte would probably find it almost as tough to escape from the tiny volcanic island located right in the middle of the South Atlantic.

The island is one of a string of remote British possessions scattered across the hostile seas that lie between Africa and South America, the remains of a once mighty empire. It’s no exaggeration to say that reaching St. Helena from Europe takes pretty much as long as in Napoleon’s time.

While St. Helena was once a port of call for sailing ships plying the route around the Cape between Europe and Asia, the Suez Canal and maritime advances have left it redundant.

Until last year, the only regular link to the outside world was RMS St. Helena, the mail ship that, every three weeks, covers the five-and-a-half day journey from Cape Town, South Africa.

After a rocky start, that’s set to change – a scheduled commercial air service linking St. Helena to Johannesburg is due to start later this month.

A year of setbacks

In 2016, with much fanfare, St. Helena prepared to inaugurate its first ever airport – but then an unexpected obstacle got in the way: the South Atlantic winds.

South African airline Comair, a British Airways franchise, planned to start flights to the island in May 2016 using a Boeing 737-800 aircraft. However, a serious wind shear issue was detected as soon as the airliner attempted to land.

The wind shear only affects aircraft when landing from the north, but if the aircraft approaches from the south, there’s a problem with tailwinds. Prevailing tailwinds mean that aircraft need a longer runway to land with a full load.

Smaller aircraft can still land, and a number of them have done so – for medical evacuation missions, for example. However, size and weight limitations render the route uneconomic for most airlines.

Atlantic Star Airlines, a start-up founded by former British Airways pilots with the purpose of linking St. Helena to the UK, advocated the use of Avro RJ100 aircraft, a now-aging model that nevertheless has the capability to land on very short runways.

To demonstrate, last year Atlantic Star Airlines arranged for a former SWISS Avro RJ100 to make a stopover at Saint Helena while on a ferry flight from Zurich to Chile. Although the landing was successful, the Avro option has fallen to the wayside. 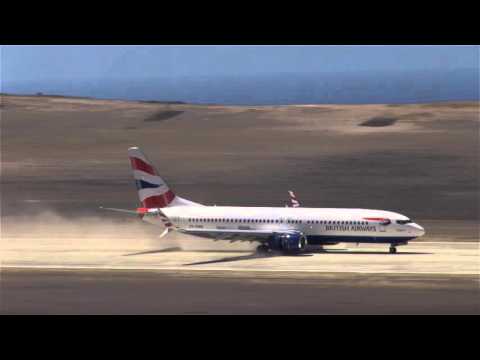 Embraer, the Brazilian aircraft manufacturer, also threw in its two cents. It flew one of its Embraer E190 jets, an airliner with capacity for nearly 100 passengers, from Fortaleza, Brazil direct to St. Helena. As well as demonstrating the capabilities of this aircraft type and its suitability for operations in the island, the Brazilian firm’s publicity stunt left us with stunning footage of St.Helena’s natural beauty.

It’s actually an Embraer E190 airliner that will finally take up the task of connecting St. Helena to the outside world by air.

The flight, expected to launch on October 21, will have a stopover in Windhoek, Namibia. The aircraft will carry a maximum of 76 passengers, instead of the usual 99, in order to comply with operational restrictions imposed by the tailwinds. 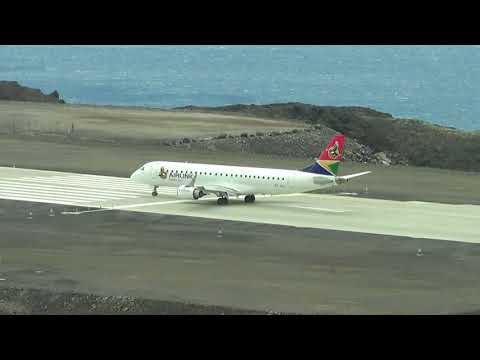 In the meantime, Atlantic Star Airlines has not given up on its project to link the island to Europe.

“We are going to wait and see who it goes with the South African route, which is government supported. If we can establish there is enough demand, we may follow suit with some charter services to the UK” states Richard Brown, Atlantic Star’s CEO

Why the airport matters

At the moment traveling between Europe and St. Helena is a costly proposition, both in terms of time and money. After reaching Cape Town, visitors must spend five and half days at sea aboard the RMS St. Helena.

Once on the island, travelers must wait until the ship makes its next visit before they can leave – meaning a month-long trip with no flexibility of dates, a luxury few travelers can afford. Mostly it’s the islanders that suffer the inconveniences of isolation.

Atlantic Star Airlines expects “Saints,” as the locals are commonly called, to make up most of the air traffic, at least initially.

St. Helena has a population of about 4,500, but there another 10,000 Saints overseas, mainly in the UK. Those that leave the island in order to work or study overseas are often resigned to spending long periods of time away from their loved ones.

No wonder that anticipation is running high among the islanders over the new air service.

Air links are expected to have a massive transformative effect on the island’s economy – particularly on a tourism industry that’s currently limited to a few guest houses. In many ways, St. Helena is a sort of lost paradise.

It boasts an unspoiled natural environment with ecosystems ranging from rainforest to desert.

It has a picturesque capital, Jamestown, and several historical sites, some connected to the island’s past role as a Royal Navy anti-slavery base.

Do you know the world's most remote islands?

The most popular of the island’s sights, though, may well be Longwood House, Napoleon’s last residence on the island. Locals are already gearing up for the economic boost that tourism can bring about, with plans to expand the island’s accommodation options and some operators working on special-interest tours.

There may be concerns about the island’s ability to cope with a sudden influx of visitors, but even at peak capacity St. Helena is likely to remain a niche tourist destination.

Its tourist appeal largely depends, after all, on its remoteness and truly unique character.

Despite its tiny size, there is no shortage of things to do and see on the island.

Its waters present numerous opportunities for whale- and dolphin-watching.

It’s also perfectly suited for stargazing – in fact while on St. Helena astronomer Edmond Halley worked on the first star catalog ever compiled with the aid of a telescope.

One of the most promising tourist markets, though, is that of Napoleon-era enthusiasts.

Even today, in spite of its isolation, St. Helena welcomes a small but regular stream of French visitors who come to see the sites linked to their country’s former emperor, who died in exile on the island. These include Longwood House, as well as The Briars, Bonaparte’s first residence in the island, and The Valley of the Tomb, where he was buried before his remains were later repatriated.

The number of Napoleon devotees making the pilgrimage to St. Helena can only be expected to increase once the island becomes more easily accessible from Europe.

The Napoleonic Estates also have a peculiarity that adds to St. Helena’s uniqueness: they’re under direct French administration and enjoy extraterritorial status, making them French enclaves within British territory.

The French flag flies over them and the French Republic maintains a consul on the island that takes care of their preservation.

Coffee has been grown on the island since the 18th century, when beans were brought all the way from Yemen. The island produces a rare, high-quality coffee whose flavor was praised by Napoleon himself, and is currently appreciated by connoisseurs the world over.

As coffee beans are particularly sensitive to changes in humidity and environmental conditions and their quality can decay significantly during the long journey to market, air transport will no doubt facilitate the export of what is possibly the island’s most valuable commodity.

And that’s not all.

SA Airlink will also provide a monthly charter service between Saint Helena and Ascension Island, a route extension that was previously considered by Atlantic Star Airlines.

Ascension Island, a dependency of St. Helena that lies about 1,300 kilometers (800 miles) to the northwest, has long had an air base with regular Royal Air Force passenger flights to and from the UK, but the military activity and small permanent population means prospects for tourism development are limited.

However, the fact that quite a few Saints work on Ascension might make it feasible to launch commercial flights between the two islands.

And a trip to Ascension could provide the most adventurous travelers with the perfect complement to the St. Helena experience.

Very different from St. Helena, Ascension features other-worldly volcanic landscapes and a unique physical environment that inspired naturalist Charles Darwin when he stopped here and on St. Helena in 1836.

When looking at St. Helena’s tiny dot on the map it’s easy to forget it played host to the likes of Napoleon, Darwin and Halley and was once right in the middle of one of the most important trade routes in the world.

What geography gave, geography took away and the ocean that once linked it to the epicenters of culture and commerce became, in later times, a formidable barrier.

However, as the island prepares to welcome the first aircraft, St. Helena might soon emerge as the destination of choice for the world’s most discerning tourists.

A hidden treasure waiting to be rediscovered.

Miquel Ros is an aviation blogger and consultant. An economist by background, he’s worked for Flightglobal and Bloomberg. He currently covers the airline industry through Allplane.tv and collaborates with luxury travel website Trovel and other online media.