Thanks for joining us for another crucial day in the Brexit saga.

UK Prime Minister Boris Johnson's vision for Brexit will see its first big parliamentary test on Tuesday, when lawmakers vote on his new withdrawal agreement bill. Here, Britain will -- for the first time -- get a feeling for what level of support Johnson's bill has in Parliament.

It comes after the Prime Minister's Brexit plan was delayed yet again on Monday. The Speaker of the House of Commons refused the government's request to hold a meaningful vote on it -- the second time in three days that Johnson's plans were scuppered. 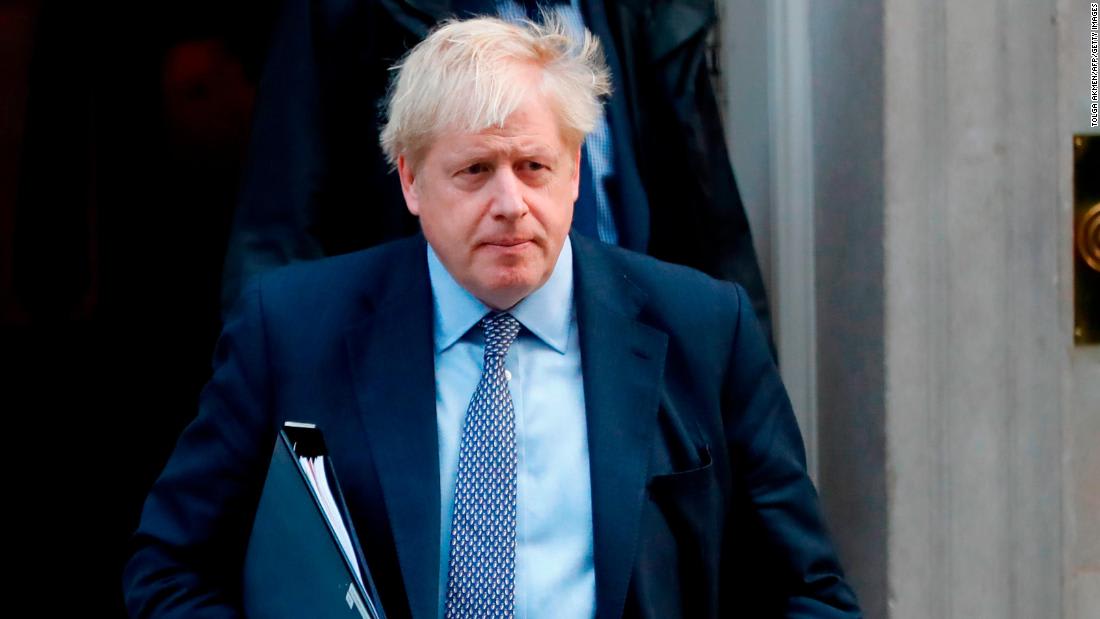 It's another crunch week for Brexit (no, we really mean it this time)

The European Union (Withdrawal Agreement) Bill has been published in all its glory, totaling 110 pages, on Parliament's website. It's the piece of legislation that will enact Prime Minister Boris Johnson's deal.

Some lawmakers have argued that there is insufficient time to scrutinize the bill, after the government announced it hopes to wrap everything up by Thursday.

You can read the full text here, where it's been published online:

The first crucial vote on the Bill will come on Tuesday, on what’s confusingly called the “second reading” of the bill. Given the Speaker’s ruling today, it means this vote will be the first test of whether his Brexit plan is likely to pass the House of Commons.

"The European Parliament is is ready to do its part of the job but for now, the ball is in UK's court," Duch added.

UK Prime Minister Boris Johnson has shared a new video on Twitter, laying out a number of arguments for the deal he has negotiated with the European Union.

"This new deal means we can take back control of our laws, borders, money and trade. #GetBrexitDone," Johnson tweeted.

Michael Gove, the Chancellor of the Duchy of Lancaster, is now making a no-deal Brexit statement.

He told lawmakers that the government has not yet received a response from the EU to the UK's Brexit deadline extension request, adding that as a result plans to mitigate a no-deal Brexit have been ramped up.

"We must ensure that the vessel which brings certainty passes," Gove stressed to lawmakers, referring to UK Prime Minister Boris Johnson's deal.

We still don't know the answer to this question, because Speaker John Bercow blocked a vote on the UK Prime Minister's Brexit deal today.

But we will get a sense of the level of support for the deal in Parliament tomorrow, when the first vote is held on the detailed legislation that turns it into law.

That vote will be on what is confusingly known as the bill's second reading. So which way will it go? CNN has attempted to estimate the level of support for Johnson's deal, based on information on how lawmakers voted on Saturday, their public statements, and other reports in other credible media sources.

For the deal: Johnson can count on the support of the 287 voting Conservative lawmakers, including 28 hardline Brexiteers who never voted for his predecessor's deal. He also has the support of 20 independent Conservatives, at least nine Labour MPs, and at least four independents -- including one, John Woodcock, who appears to have changed his mind. That takes him to 320 -- but in any vote, two MPs from this bloc would be nominated as tellers (counters of the votes), so that means he has 318 actual votes behind him.

Against the deal: Opposing Johnson are 231 Labour MPs, 35 members of the Scottish National Party, 19 Liberal Democrats, 10 Democratic Unionist Party MPs, five members of The Independent Group, 4 Welsh nationalists, three independent Conservatives and one Green MP. Another seven independent MPs would be likely to vote against the deal. That's a total of 315. Remove two tellers and you get a final tally of 313.

Three Labour MPs and one independent Northern Ireland unionist remain uncommitted, but are leaning towards supporting the deal. 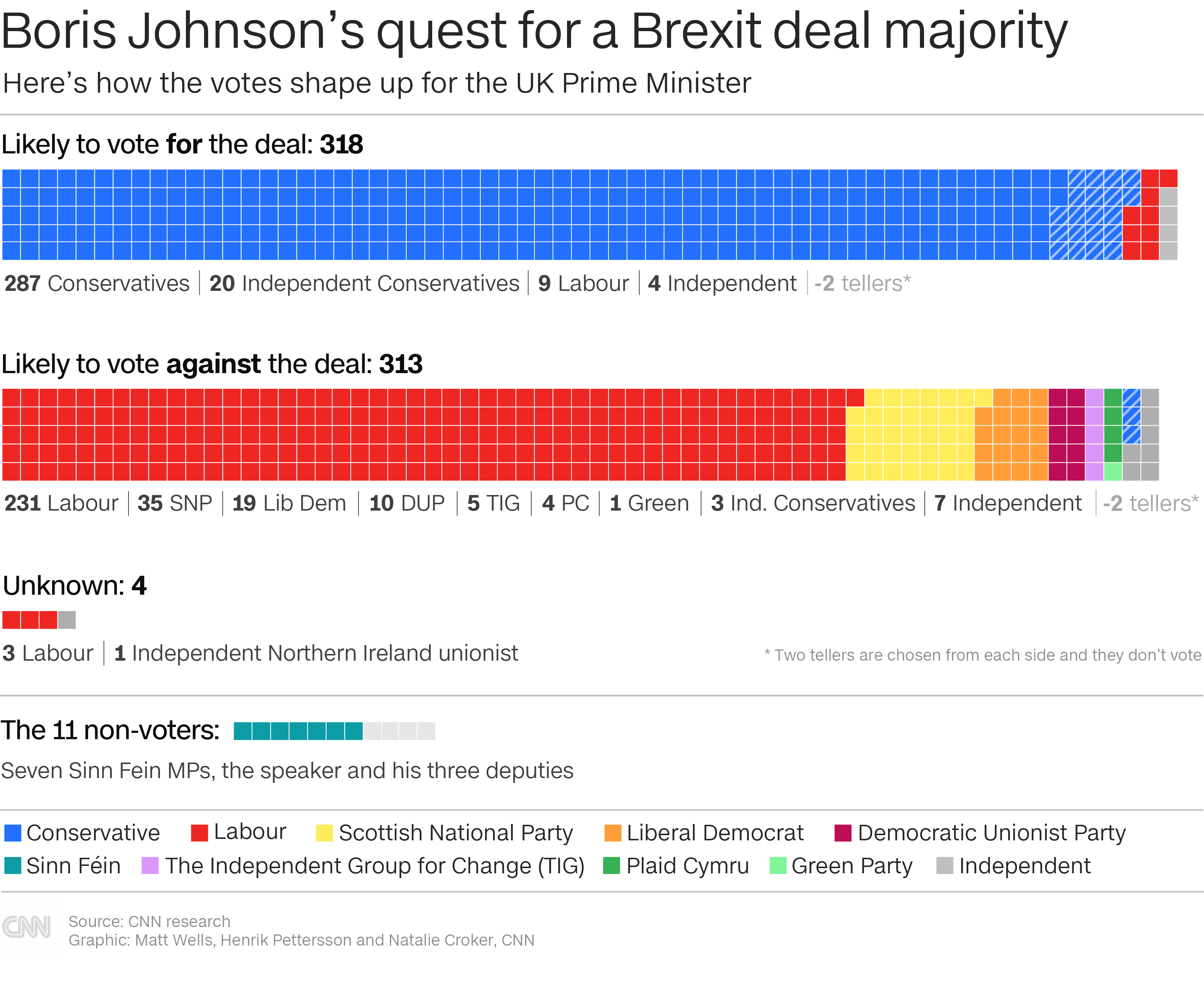 Based on these calculations it seems that the second reading should pass tomorrow. It may even pass by a bigger margin than these numbers suggest. Some opponents of the bill may wish to ensure it gets to its next parliamentary stage simply in order to try and amend it -- perhaps by adding a provision for a second referendum, or keeping the UK in a customs union with the EU.

Scottish National Party lawmaker Pete Wishart has told Jacob Rees-Mogg that his proposed Business Statement is "totally unacceptable," as lawmakers won't have enough time to look over the deal.

"Three days to consider a bill, somebody suggested it's 100 pages, how on earth are we going to have the chance to assess that properly? No economic impacts, no economic assessments," Wishart said.

Leader of the House of Commons, Jacob Rees-Mogg, has updated Parliament on what the rest of the week will look like.

During the Business Statement, Rees-Mogg confirmed the Government hoped to wrap everything up and pass all key Brexit legislation by Thursday -- in just three days' time. By British parliamentary standards, that's breakneck speed. The legislation is likely to be fiendishly complicated, with reports that the bill will be more than 100 pages long.

Three days is not a great deal of time at all to consider such complex legislation, and we can be sure that some lawmakers opposed to Brexit will try and frustrate its progress.

The government wants to get everything done by October 31, so it can stick to Boris Johnson's promise to get Brexit done by that date, do or die. But the government has already been forced by law to ask for an extension to the Brexit process until January 31 – and it may find out that it will need some of that time, after all.