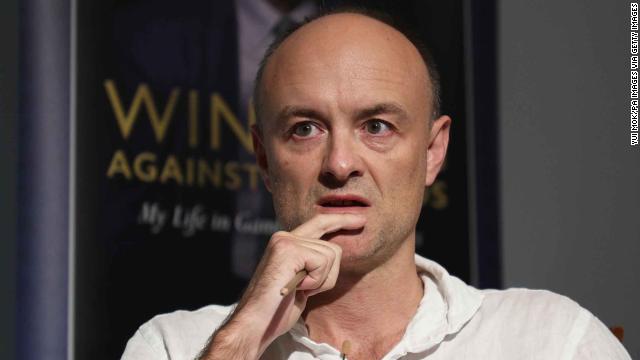 Boris Johnson has been planning an election campaign for months. Ever since taking over from Theresa May as Prime Minister and leader of the Conservative party, Johnson has been setting himself up as the man fighting to get Brexit done, while opposition lawmakers were hellbent on thwarting him at every opportunity.

The man driving this "People versus Parliament" narrative was Johnson’s most senior advisor, Dominic Cummings.

Cummings masterminded the victorious Vote Leave campaign in 2016, most famously coming up with the campaign slogan, “Take Back Control” and the widely-debunked claim that being an EU member state cost the UK £350 million a week.

He is a deeply divisive and controversial figure. His aggressive and unorthodox way of doing politics has left many in Westminster questioning Johnson’s judgment. Cummings is a man, after all, currently held in contempt of Parliament for refusing to give evidence to a Parliamentary select committee.

He claims to have never been a member of any political party, including the Conservative party, over which he has such a tight grip. His brutal style goes against the gentle sensibilities of many Conservative members (think village greens and warm beer rather than accusing your opponents of “surrender” and "betrayal" at every turn).

However, Cummings will not be officially running the election campaign, CNN has been told. Soon after taking office, Johnson appointed Isaac Levido, formerly an advisor to the Australian Liberal Party, to run the Conservatives' political operations – including elections. Downing Street sources say that had always been Johnson’s plan and that Cummings was never going to run an election campaign.

Shortly after Cummings took his job, he told government advisors that he would stand down after Brexit was done. He was due to have an operation, he told aides, which he had already postponed in order to "get Brexit done" by the original October 31 deadline.

Even though that deadline has been broken, Downing Street sources have told CNN that Cummings has not indicated any intention of leaving, and will continue to work closely with them. “That was in the context of Brexit being done by then,” one government advisor told CNN.

While he might not officially be in charge of the Conservative’s campaign, it’s pretty clear that the most controversial man in Westminster will be working very closely with Johnson over the next few weeks. “He’s Dom, still around, and will be involved in (the) campaign,” a Downing Street source told CNN.

All of which means team Johnson will continue to be as tight-knit as it has been for months. He might not be running the show, but the Conservatives' election campaign will clearly be created in his image. And in the words of one former Conservative party advisor, “His political judgment is brilliant... everyone who is on the opposing side should be astonishingly frightened.”

That might be true. But the opponents of Cummings and Johnson can take heart in one thing: This election is only happening because of the failure of the Prime Minister – and that of his most senior aide – to get Brexit done by October 31. It could yet be that the decision to run an aggressive election campaign will blow up in their faces and result in them being booted out of Downing Street.

The British economy will be £70bn ($90bn) worse off under Prime Minister Boris Johnson’s Brexit deal, according to an economic forecast published on Wednesday by the National Institute of Economic and Social Research (NIESR).

The report says that the UK economy would be 3.5% smaller over the next 10 years under Johnson’s withdrawal agreement, compared to if the UK stayed in the European Union.

And the British economy has already been hit hard by Brexit -- it is an estimated 2.5% smaller now than it would have been because of the 2016 referendum, according to NIESR.

A spokesman for the United Kingdom Treasury (finance ministry) told CNN that the government plans on a “more ambitious” agreement with the EU than the “standard free trade deal that NIESR has based its findings on.”

Photo calls. Stump speeches. Leaflets tumbling through letterboxes. Debates (and debates about the debates). Daily opinion polls showing the slightest nudge one way or the other.

Whether it likes it or not, Britain is now in election season.

But while this poll will have all the hallmarks of campaigns past, it will not be a regular election.

For one, there’ll be a chill in the air. Spring elections are the norm in the UK, and its last poll took place in June. But this year, activists will be accosting Christmas shoppers, and nativity scenes will decorate polling stations in schools and churches across the country.

More pressingly, the temperature of the nation is dramatically different too. Brexit will dominate the campaign; and unlike in 2017, when both the Conservatives and Labour were arguing they would pursue Brexit, voters have a wide array of choices.

This year four parties are seeing reasonable results in the polls, and all have dramatically different approaches to resolving the UK's biggest political crisis since the World War II.

The immediate future of the nation could therefore come down to a handful of mini-battles over the next six weeks, and whether one of those groups can pick up some real campaign momentum.

Here's a recap of where the main political parties stand:

Tory promise to "get Brexit done": Prime Minister Boris Johnson's Conservative Party pitch is to "get Brexit done" and dusted, while also focusing on an optimistic "one nation" agenda that includes domestic issues like education, healthcare, and crime. The PM has cast the vote as the "people vs. the parliament," suggesting that lawmakers have thwarted the will of the British public in failing to pull the UK out of the European Union. He's betting this message will be enough to break the political deadlock on Brexit by ushering the Conservatives back into government -- but that's far from certain.

Labour touting "real change": The opposition Labour Party is running on a radical manifesto that includes key promises like reducing carbon emissions to zero by 2030, renationalizing water, energy, rail and postal services, and making higher education, childcare, social care and medical prescriptions free -- all of which would require a significant uptick in public spending. Their campaign positions the election as a "once in a generation chance" for "real change," while promising to "get Brexit sorted" by throwing the question back to the public in a second referendum. Labour's plan is to negotiate a softer Brexit deal with the EU, and then to put it to a vote against the option of remaining. Party leader Jeremy Corbyn says the process can be pulled off within six months of an election, and his is the only major party pushing for a second poll.

Liberal Democrats pledge to "stop Brexit": The Lib Dems, much like the Conservatives, are campaigning on the single platform of Brexit. The party has pledged to "Stop Brexit" by revoking Article 50, the mechanism for leaving the European Union, if it wins a majority in Parliament. And if there were any questions about its appetite for an election, party leader Jo Swinson responded to news of the vote with a GIF from the film "Bring It On."

Scottish National Party pushes independence: The SNP has released a campaign ad featuring the Prime Minister's tousled blond hair and the message: "Time to choose, Scotland's future in your hands or those of Boris Johnson?" The left-wing Scottish nationalists, who dislike Johnson and his right-wing English Conservatives, are pushing for another independence referendum to separate the country from the UK.

Brexit Party demands "clean break": Nigel Farage reprised his role as a pro-Brexit agitator when he set up the Brexit Party, which performed well in this year's European election. He wants a no-deal Brexit, an outcome economists have warned against but the government briefly talked up before striking a deal with the EU. Farage will take on Johnson over his Brexit credentials, and the winner of that battle could dictate the election -- if Farage picks up momentum, the Conservatives could be squeezed from both sides on the issue. The party's campaign message on social media is: "No more procrastination. We need A Clean-Break now."

With the UK's December election locked in, the main parties have already kicked off their campaigning.

The Labour Party called the election “a once-in-a-generation chance to rebuild and transform our country.”

Good morning from London, where a general election on December 12 was backed by MPs on Tuesday evening.

The upcoming vote will be the UK's third general election in four years.

In fact, British voters have had their say in some sort of poll every single year for the past five years: