UK lawmakers backed delaying the Brexit process: MPs voted to allow a short delay to the United Kingdom’s exit from the European Union, a day after they rejected a no-deal Brexit. They also overwhelmingly rejected calls for a second referendum.

What’s next? Prime Minister Theresa May will seek an extension from Europe on March 21 and 22, and she'll need to give EU leaders a good reason for that to be approved. May has warned if MPs can’t agree upon a deal in the coming days, an even longer delay to Brexit will be needed.

When is Brexit supposed to happen? As it currently stands, the United Kingdom is due to leave the EU in 15 days -- on March 29.

The European Parliament's chief Brexit negotiator Guy Verhofstadt, who opposes a lengthy Brexit delay, has said that if Britain is to be granted an extension to the Brexit process, the government must set out its reasons clearly. "Under no circumstances" should the UK be granted "an extension in the dark."

European Council President Donald Tusk said earlier in the day that he would back a "long extension," if the UK decides that it needs it.

Nearly 9 out of 10 businesses say they want a delay to Brexit, the Confederation of British Industry has revealed, hours before lawmakers return to parliament to vote on just that issue.

A CBI survey of services, manufacturing and distribution sectors released on Thursday indicates that just 8% of 273 companies polled reject an extension to Britain's withdrawal from the European Union.

“An overwhelming majority of businesses want an extension to Article 50 which should be as short as possible, but as long as is necessary," Josh Hardie, CBI Deputy Director-General, said in a statement, adding that any extra time "must be used by MPs to finally craft a solution that protects livelihoods and communities across the UK."

The survey of 273 firms found that:

The UK government has set out the parameters for extending Article 50 in a document published ahead of Thursday’s vote.

It states that in the event that the House of Commons votes for an extension, “it would be appropriate for the Prime Minister to write to the President of the European Council, setting out why the UK was requesting an extension and for how long.”

The document also flirts with the possibility of the UK participating in the upcoming European Parliament (EP) elections in May, saying that if the UK were to request an extension period beyond July 1 the UK “would need to participate in the EP elections."

UK Prime Minister Theresa May should back an Article 50 extension and use the delay to "rethink" her Brexit strategy, Scotland's First Minister Nicola Sturgeon said on Twitter.

"If you are a Brexiteer, what does it say about your project if it has to be founded on a deal that a majority believes to be fundamentally flawed," Sturgeon said. "That cannot be the way to proceed -- which is why PM should accept defeat, change course and accept this opportunity for a rethink."

Scotland voted overwhelmingly to remain in the European Union in 2016, two years after holding its own independence referendum on seceding from the United Kingdom (when it voted by 55% to stay).

But now, with the current political quagmire in Westminster, Sturgeon and other members of her Scottish National Party are calling for a second vote on independence.

Prime Minister Theresa May is facing calls to regain control of her party after Conservative ministers and Cabinet members defied her in Wednesday night's vote.

"Her authority was openly defied by Cabinet ministers and other ministers," Nigel Evans, a Conservative Brexiteer, told the UK's Press Association, referring to May's attempt to whip against her own motion.

A government source told CNN that once the Spelman amendment -- rejecting a no-deal Brexit at any time and under any circumstances -- passed, it made May's motion unacceptable as it directly contradicted government policy. And when May tried to whip her ministers to vote against her own motion she lost.

"She needs to reassert her authority. We have to have collective responsibility in government, otherwise it just simply doesn't work," Evans added.

Another former Conservative minister, George Freeman, has suggested in a Twitter post that May should offer to resign in order to get support for her deal.

French President Emmanuel Macron has said that any extension to Brexit could only be "technical," ahead of a vote in UK Parliament on whether to delay the withdrawal process.

“If the British ask for a delay it could perhaps be a technical delay to allow more time to put their departure in place," Macron, who is currently in Kenya, said.

But he added that the UK would need a reason for the European Union to grant them an additional delay "to ensure something will come out of it." The heads of all 27 remaining EU countries would have to approve any request to extend Article 50.

"It cannot be to allow more negotiations over something we’ve already negotiated for many months and said cannot be further negotiated,” Macron said, underlining the EU position that they will provide no more concessions on the Brexit deal struck with Prime Minister Theresa May.

“The solution to this impasse is in London."

Lawmakers have soundly rejected crashing out of the EU without a deal on March 29. 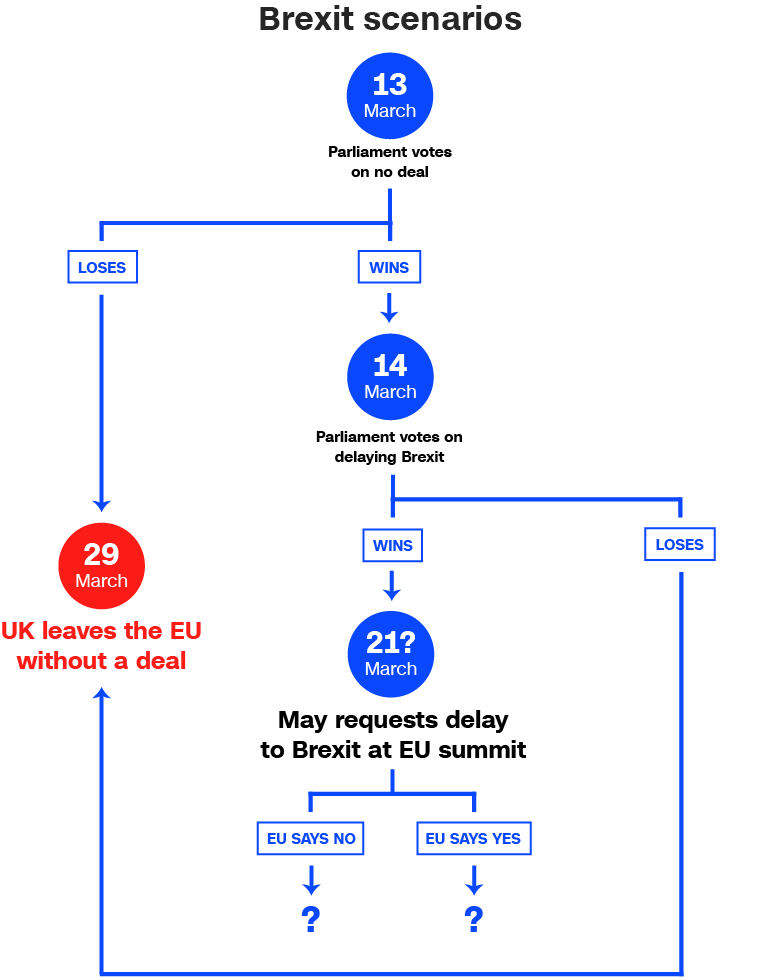 But last night's vote against a no-deal Brexit would not actually prevent the UK leaving the EU on March 29, since Article 50, which mandates the UK's departure, has already been triggered.

So, now that a "no deal" has been rejected, lawmakers will vote today on whether they support delaying the divorce process entirely.

If they back that, the PM will have to put in an Article 50 extension request to the EU.

The heads of all 27 remaining EU countries would have to approve any such request.

European Council President Donald Tusk has said he will back a Brexit delay, if the UK Parliament votes tonight to extend Article 50, the mechanism by which member states can quit the EU.

Tusk said in a tweet on Thursday that he would appeal to the 27 European Union leaders to "be open to a long extension if the UK finds it necessary to rethink its Brexit strategy and build consensus around it."

If British lawmakers vote to delay Brexit tonight, Prime Minister Theresa May will have to put in an Article 50 extension request to the EU. The heads of all remaining EU leaders would have to approve any such request.

Today the UK Parliament will vote on another motion over whether to delay the divorce process beyond the March 29 deadline.

The government's motion will ask MPs to back an extension until June 30, in order to pass EU exit legislation. Any extension would need to be approved by the EU.

The motion also points out that any extension beyond June 30 "would require the United Kingdom to hold European Parliament elections in May."