We're wrapping up our live coverage from London, where another dramatic Brexit day has come to a close.

We'll be back tomorrow, when Prime Minister Theresa May will be in Brussels making her pitch to European Union leaders for an extension to Brexit until June 30. You can follow that here.

Prime Minister Theresa May might be the last person in Britain to think her Brexit deal isn’t dead. But, evidently, she thinks it might not be a bad idea for someone to call it an ambulance.

After a day of drama in Westminster and Brussels, May addressed the nation to say that despite writing to President of the European Council Donald Tusk to seek a Brexit delay, she was still determined to get her twice-defeated divorce deal approved by UK parliament.

There’s a lot more stick than carrot these days, and the fallout from that will worry members of her already divided Conservative Party. But the reality is that May is out of options.

And if she’s going to get this thing done, that means threats. And make no mistake, that’s exactly how this will be seen by politicians on both sides of the Brexit divide.

The message couldn’t have been clearer: the delay is your fault and you are letting down the nation.

Sometimes, after days of political drama, it’s worth reflecting on where we have ended up.

As we go into the final EU summit before the UK leaves the EU, we knew that the UK needed to extend Article 50. The question was, how long could EU leaders swallow having Brits sucking up oxygen in Brussels?

Here in Brussels, the picture is still pretty damn murky.

Ever since it became known last week that the UK would request an extension of the article 50 process, it’s been all eyes on Brussels. The key question: exactly how long would EU leaders allow Brexit to be delayed? The picture is murkier than ever.

Early on Wednesday morning, Downing Street sources surprised everyone by leaking to journalists that May would request a short extension. All week, for reasons that should in retrospect be examined by all involved, the expectation was that in the absence of the withdrawal agreement being given the nod in parliament, May would ask for a lengthy extension.

After a day of blind panic about how the EU would respond, Tusk made it clear that he could cope with a short extension -- probably shorter than May requested for various reasons -- if it meant the withdrawal agreement getting approved.

But he would say that: it’s the EU’s preferred option by a mile. Why? They don’t want the UK hanging around, the EU has a list of problems as long as your arm to be getting on with.

Indeed, some European diplomats cannot quite believe that the UK is still dragging its heels over this and are privately angry at how many concessions were given to a country soon to be outside the union.

So it’s Meaningful Vote three, it seems. May’s Brexit deal might not be dead. And, despite everything, it might not even be dying. But if it doesn’t stop taking body shot after body shot, it’s running out of time to recover in any meaningful way. 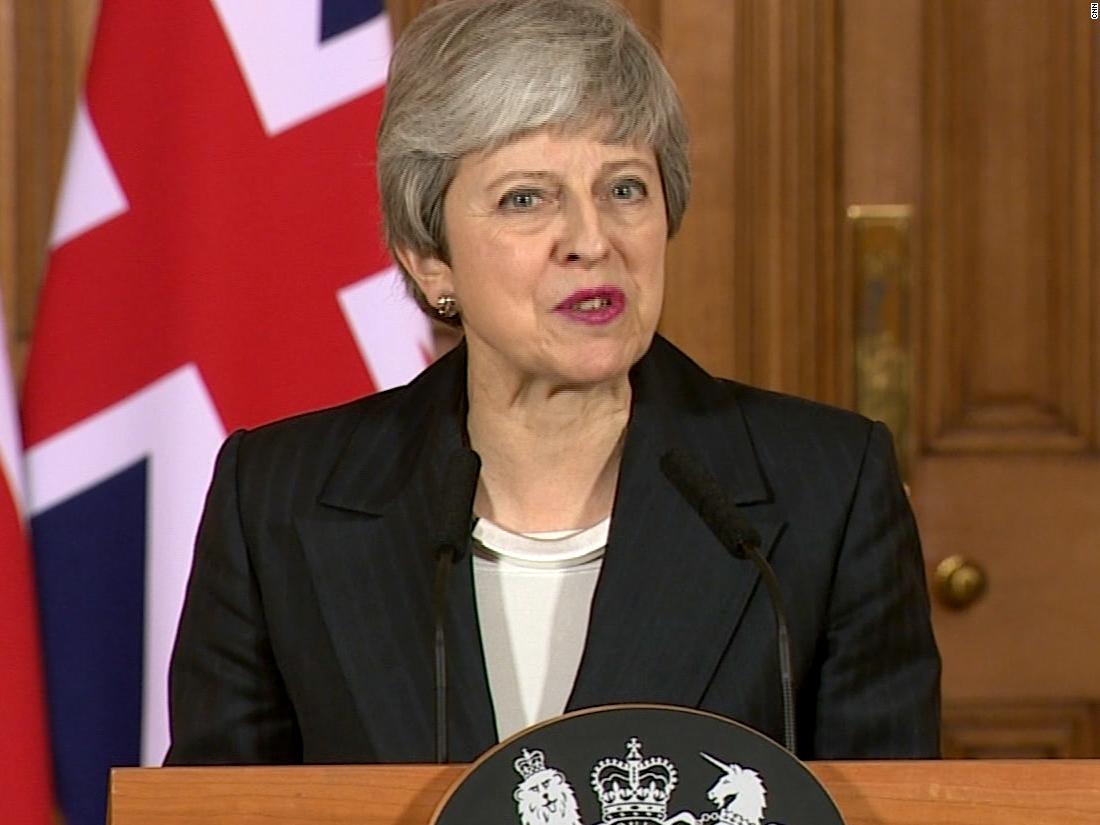 "Nearly three years have passed since the public voted to leave the European Union. It was the biggest democratic exercise in our country’s history. I came to office on a promise to deliver on that verdict.
In March 2017, I triggered the Article 50 process for the UK to exit the EU – and Parliament supported it overwhelmingly. Two years on, MPs have been unable to agree on a way to implement the UK’s withdrawal.
As a result, we will now not leave on time with a deal on 29 March. This delay is a matter of great personal regret for me.
And of this I am absolutely sure: you the public have had enough. You are tired of the infighting. You are tired of the political games and the arcane procedural rows. Tired of MPs talking about nothing else but Brexit when you have real concerns about our children’s schools, our National Health Service, and knife crime.
You want this stage of the Brexit process to be over and done with. I agree. I am on your side.
It is now time for MPs to decide.
So today I have written to Donald Tusk, the President of the European Council, to request a short extension of Article 50 up to the 30 June to give MPs the time to make a final choice.
Do they want to leave the EU with a deal which delivers on the result of the referendum – that takes back control of our money, borders and laws while protecting jobs and our national security?
Do they want to leave without a deal?
Or do they not want to leave at all, causing potentially irreparable damage to public trust – not just in this generation of politicians, but to our entire democratic process?
It is high time we made a decision.
So far, Parliament has done everything possible to avoid making a choice. Motion after motion and amendment after amendment have been tabled without Parliament ever deciding what it wants. All MPs have been willing to say is what they do not want.
I passionately hope MPs will find a way to back the deal I have negotiated with the EU.
A deal that delivers on the result of the referendum and is the very best deal negotiable.I will continue to work night and day to secure the support of my colleagues, the DUP and others for this deal.
But I am not prepared to delay Brexit any further than 30 June.
Some argue that I am making the wrong choice, and I should ask for a longer extension to the end of the year or beyond, to give more time for politicians to argue over the way forward.
That would mean asking you to vote in European Elections, nearly three years after our country decided to leave. What kind of message would that send?
And just how bitter and divisive would that election campaign be at a time when the country desperately needs bringing back together?
Some have suggested holding a second referendum. I don’t believe that is what you want – and it is not what I want.
We asked you the question already and you gave us your answer.
Now you want us to get on with it.
And that is what I am determined to do."

Theresa May issued a stark warning to MPs on Brexit, telling them that the British public wanted them to "get on with it" and saying it was "high time" for them to take a decision.

"Parliament has done everything possible to avoid making a choice," she said in her statement to the nation. "All MPs have been willing to say is what they do not want."

Speaking from inside Downing Street, May said her divorce deal delivered on the result on the 2016 referendum, and was the best available.

"I am not prepared to delay Brexit any further than the 30th of June," May added, as she repeated a pledge she made earlier today in the House of Commons.

May also again ruled out supporting a second referendum on Brexit, and she rejected the idea she should ask for a longer extension to the withdrawal process.

“That would mean asking you to vote in European elections” nearly three years after the referendum.

“What kind of message would that send," she asked.

Theresa May begins her statement to the nation by saying she regrets that UK Parliament has been unable to support her Brexit deal.

"We will now not leave on time with a deal on the 29th of March. This delay is a matter of great personal regret for me."

"Of this I am absolutely sure -- you, the public, have had enough."

"I am on your side. It is now time for MPs to decide."

British Prime Minister Theresa May is making a statement from Downing Street.

Britain is scheduled to leave the EU in just nine days. Here's a summary of some key dates until then.

Thursday, March 21: May heads to Brussels for a two-day summit with European leaders, where she will make her case for them to grant an extension to the Brexit process until 30 June.

Saturday, March 23: The Prime Minister will return to Westminster to persuade MPs to back her deal. She needs to persuade 75 to flip in order for it to pass.

Monday, March 25: The government must table an amendable motion in the House of Commons in response to its second meaningful vote loss last week. MPs will then have the opportunity to press for votes on alternative Brexit options.

May is also expected to call a third meaningful vote on her Brexit deal next week.

Thursday, March 28: An eleventh-hour emergency EU summit could take place on Thursday if May's deal is defeated for a third time and no other agreement has been reached.

During Prime Minister's Questions earlier today, Corbyn had urged May to meet with him to discuss his alternative Brexit plan.

But the Labour leader left talks when he saw that lawmakers from the Independent Group, which includes eight former members of his party, were involved.

"We’re in a crisis situation here where the people of this country expect representatives from different political groupings in Parliament to come together and actually try and chart a way forward," Independent Group spokesperson Chuka Umunna told Sky News.

"That’s why the prime minister convened the meeting. I welcomed the fact that she did so.

"I think it’s a really extraordinarily behavior for the Leader of the Opposition to behave in really this very juvenile way when the moment demands that we all step up and engage in some serious dialogue to find a way through this chaos and this mess. But he’ll have to explain his actions."

British Prime Minister Theresa May will address the nation at 8:15 p.m. local time (4:15 p.m. ET). Her statement comes a day before she meets European leaders in Brussels.