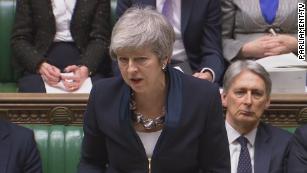 By Luke McGee and Eliza Mackintosh

We'll be back here tomorrow, when the government will hold a debate on an amendable motion to Theresa May's Brexit deal.

The motion will seek to reaffirm support for the government in seeking changes to the Northern Ireland backstop and to recognize that negotiations are ongoing.

Theresa May's move to open the way for a delay to Brexit could help her government avoid an embarrassing defeat on Wednesday when lawmakers reconvene to debate an amendable motion to her deal.

In doing so, she's managed to head off the opposition Labour Party, which announced earlier this week that it would support an amendment in Parliament ruling out a no-deal Brexit and supporting an extension to Article 50.

Labour declared yesterday that it would also back a second EU referendum, should its alternative to May's Brexit plan be rejected by Parliament on Wednesday.

These sudden policy shifts fall against the backdrop of major internal divisions in both the main parties. In some sense, they could be seen as little more than political maneuvering, aimed at shifting the Brexit narrative back onto more comfortable ground for either party. That, and a little bit of party management.

So, is it a sea change or a cynical political move?

Speaking on Sky News, Jacob Rees-Mogg, a leading Brexiteer and the chairman of the European Research Group, said Theresa May's proposal to give lawmakers a vote to extend Article 50 would only delay the inevitable.

And it won't make him more willing to back her deal either.

"The cliff edge, if that's the term people want to use, has merely been moved back," Rees-Mogg said, adding that there was no evidence a new deal could be agreed after a short extension.

He urged lawmakers who want a delayed Brexit to think about what they want it for -- to stymie leaving the EU altogether, or to help the Prime Minister get a deal.

"This brinksmanship, this sort of effort of 'call my bluff,' is not going to change people's minds to back her deal," he said, indicating that the threat of a delayed Brexit was not enough to persuade Brexiteers to vote for May's plan.

The Prime Minister's spokesman has refused to say whether the government would support an extension to the Article 50 divorce process if Theresa May's deal is defeated.

Because the government's focus is on bringing back a deal for the next meaningful vote, May's spokesman shut down questions on what might come next -- including how the government would whip MPs. Downing Street said that “questions of how lawmakers are told to vote are for another day.”

May also batted away questions from lawmakers about which way she would vote on Article 50 should her deal fail, saying only that she would not want to see it extended.

Besides Theresa May's plan to put a delayed Brexit up for a vote, here are the other key takeaways from her statement:

UK and EU working on "alternative arrangements" to backstop in Ireland

The UK and EU have agreed to consider a joint work stream to develop alternative arrangements to ensure the absence of a hard border in Northern Ireland.
This work will be done in parallel with the future relationship negotiations and is without prejudice to them.
Our aim is to ensure that, even if the full future relationship is not in place by the end of the implementation period, the backstop is not needed because we have a set of alternative arrangements ready to go.

Not only would giving up control go against the spirit of the referendum result, it would also mean accepting new EU laws automatically, even if they were to reduce workers’ rights or change them in a way that was not right for us.
Instead, and in the interests of building support across the House, we are prepared to commit to giving Parliament a vote on whether it wishes to follow suit whenever the EU standards in areas such as workers’ rights and health and safety are judged to have been strengthened.

UK would ultimately make a "success" of a no-deal Brexit

I believe that if we have to, we will ultimately make a success of a No Deal.
But this paper provides an honest assessment of the very serious challenges it would bring in the short-term – and further reinforces why the best way for this House to honor the referendum result is to leave with a deal.

We are holding further urgent discussions with member states to seek assurances on the rights of UK citizens.
I urge all EU countries to make this guarantee and end the uncertainty for these citizens.
I hope that the government’s efforts can give the House – and EU Citizens here in the UK – the reassurances they need and deserve.

He has gone back on his promise to respect the referendum result and now wants to hold a divisive second referendum that would take our country right back to square one.
Anyone who voted Labour at the last election because they thought he would deliver Brexit will rightly be appalled.
This House voted to trigger Article 50, and this House has a responsibility to deliver on the result.
The very credibility of our democracy is at stake.

Time and again, Theresa May's response to questions lobbed by lawmakers over the future of the country was this: "there are only three options."

Opposition Labour MP for Birmingham Jess Philips made an impassioned plea for May to "do a brave thing and do what is best for the country," calling on her to vote against a no-deal.

May replied that the implication was to deny the facts of the situation, adding that the only options left for the UK were to leave the EU with a deal, to leave without a deal, or to revoke Article 50.

Nigel Dodds, the Deputy Leader of Northern Ireland's Democratic Unionist Party (DUP), says the Prime Minister needs no reminding that her Brexit deal was defeated in a previous vote because of the backstop.

Addressing the House of Commons after May's speech, Dodds insisted that without "legally watertight changes to the backstop," the DUP would still not support the withdrawal deal.

Anna Soubry, one of three lawmakers who quit May's Conservative Party last week, said that the Prime Minister had once again deferred any decision-making in order to keep her party together.

"This is a shameful moment, nothing has changed apart from the fact that some of us who used to sit over there now sit over here," Soubry said, adding that May's statement was another "kicking of the can" down the road instead of putting the country first.

Soubry and fellow MPs Heidi Allen and Sarah Wollaston split from the Conservatives to join former Labour lawmakers in a breakaway bloc known as the Independent Group.

This is what Theresa May said in her statement to the House of Commons about allowing MPs to vote on extending Article 50.

As I committed to the House, the Government will today table an amendable motion for debate tomorrow.
I know Members across the House are genuinely worried that time is running out, that if the Government doesn’t come back with a further meaningful vote or it loses that vote, Parliament won’t have time to make its voice heard on the next steps. I know too that members across the House are deeply concerned by the effect of the current uncertainty on businesses.
So today I want to reassure the House by making three further commitments.
First, we will hold a second Meaningful Vote by Tuesday 12 March at the latest.
Second, if the Government has not won a Meaningful Vote by Tuesday 12 March then it will – in addition to its obligations to table a neutral, amendable motion under section 13 of the EU Withdrawal Act – table a motion to be voted on by Wednesday 13 March at the latest, asking this House if it supports leaving the EU without a Withdrawal Agreement and a framework for a future relationship on 29 March.
So the United Kingdom will only leave without a deal on 29 March if there is explicit consent in this House for that outcome.
Third, if the House, having rejected leaving with the deal negotiated with the EU, then rejects leaving on 29 March without a withdrawal agreement and future framework, the Government will, on 14 March, bring forward a motion on whether Parliament wants to seek a short limited extension to Article 50 – and if the House votes for an extension, seek to agree that extension approved by the House with the EU, and bring forward the necessary legislation to change the exit date commensurate with that extension.
These commitments all fit the timescale set out in the Private Members Bill in the name of the Rt Hon Member for Normanton, Pontefract and Castleford.
They are commitments I am making as Prime Minister and I will stick by them, as I have previous commitments to make statements and table amendable motions by specific dates.
Let me be clear, I do not want to see Article 50 extended. Our absolute focus should be on working to get a deal and leaving on 29 March.
An extension beyond the end of June would mean the UK taking part in the European Parliament elections. What kind of message would that send to the more than 17 million people who voted to leave the EU nearly three years ago now? And the House should be clear that a short extension – not beyond the end of June – would almost certainly have to be a one-off. If we had not taken part in the European Parliament elections, it would be extremely difficult to extend again, so it would create a much sharper cliff edge in a few months’ time.