As Theresa May breathes a sigh of relief, we're ending our live coverage for Wednesday. She faces a showdown over her future on Friday, and we'll bring you all the developments.

A Conservative MP said that the 1922 Committee of Conservative backbenchers had not agreed to change the party's leadership rules, but that Chairman of the committee Sir Graham Brady would meet with the Prime Minister on Friday to discuss her future.

That means Theresa May survives for now. She remains immune to another leadership challenge until December, because current party rules don't allow for more than one effort to oust a leader in the space of 12 months.

But Friday's meeting will likely be a showdown over May's future, and it's looking increasingly likely that the rest of her tenure can be measured in days, not weeks.

A number of weary Conservative lawmakers are calling for Theresa May to step down, as pressure on the embattled Prime Minister grows.

Writing in the Financial Times today, Tom Tugendhat said: "There is one last chance to get (Brexit) right and leave in an orderly fashion. But it is now time for Prime Minister Theresa May to go — and without delay."

"She must announce her resignation after Thursday’s European elections. And the Conservative party must fast track the leadership process to replace her," he added.

That came hours after Tim Loughton said he wrote to Graham Brady, the chair of the 1922 Committee, urging a new leadership election.

And several cabinet members who have been tipped as potential leadership candidates were noticeably absent from Parliament earlier as May addressed lawmakers.

Of course, May has appeared to be on the brink of quitting countless times in her short but volatile tenure.

Backbenchers in Theresa May's Conservative Party will decide today on whether to allow another vote of no confidence in her leadership, in a move that could set up the final days of the embattled prime minister's tenure.

MP Nigel Evans told CNN that the 1922 Committee of backbench MPs will discuss changing the party's rules to allow for a second challenge against May in the space of a few months.

Currently rules state that a Conservative leader cannot be challenged from within their party for one year after surviving a vote, and May won an earlier motion of no confidence in December.

"18 Conservative MPs will meet today ... and we will decide whether we want to change the rules or not," Evans said.

"But we'll see because we had a vote a few weeks ago and we decided rather narrowly not to change the rules but a couple of things have happened since then. The talks between the Conservative Party and the Labour Party have broken down completely. And of course the Prime Minster has decided to bring forward the Withdrawal Agreement bill early in June....the forecast is not looking particularly good for that," he added.

A spokesperson for Nigel Evans, who is the Joint Executive Secretary of the 1922 Committee, said he is in favor of changing the rules.

If the rules are changed, it would likely prompt an almost immediate challenge against May, in an effort to force her out.

The prime minister has wrapped up her session and has left Parliament. But her day may not be over -- an influential group of Conservative backbenchers are set to meet today, with her future likely to be the number one topic of discussion.

Arch Brexiteer Jacob Rees-Mogg asked Theresa May if her heart is really in the fourth iteration of her Brexit bill.

"In proposing this folderol, is she going through the motions or does she really believe in it?" he says.

But May responded defiantly. “I don’t think I would be standing here at the dispatch box and being receipt of some of the comments that I’ve been receipt of – from colleagues on my own side and across the House – if I didn't believe in what I was doing," she said.

May adds that she is doing it because she believes it’s in the national interest to pass a Brexit deal.

Oh, and in case you're wondering (which you definitely are) -- folderol is a noun describing something nonsensical or trivial.

May is facing several questions about the consequences of a no-deal Brexit. Chuka Ummuna, a Change UK MP, asks if she will seek another Brexit delay if she is still around by October but has failed to pass her bill.

But May simply replies that MPs should avoid that scenario by voting for her bill.

Other lawmakers press May on what impact no deal would have. "I think there would be an immediate impact economically of leaving with no deal," she says. Economists have warned of the impact of a no deal Brexit.

Some MPs also question how to ensure a new prime minister doesn't rip up May's Brexit strategy. Several backbenchers slated to run for leadership back a no deal Brexit, though Parliament looks unlikely to support the plan.

Ian Blackford, the leader of the Scottish Nationalist Party in Westminster, offers May some "friendly advice" -- "this deal is dead," he says. "Stop the charade, and let’s get on with putting the decision back to the people once and for all.”

"Look around. There is not support for the prime minister's deal," he adds, predicting she might face an even bigger defeat than last time around.

And Blackford takes a dig at the absence of some of May's key cabinet members from Parliament, suggesting they're plotting a coup.

May hits back that voting for the SNP would be voting to "betray democracy." 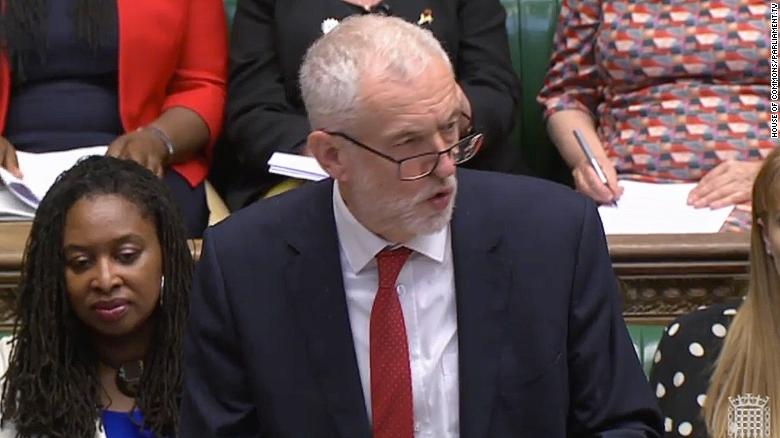 "Nobody here will be fooled by what the prime minister is offering" on a second Brexit poll, Corbyn says.

He asks if May will allow a free vote of her own MPs on the issue, or whether she will whip against a second referendum in Parliament -- as she's done before.

"If the government truly believes this is the best deal for the economy, and for jobs, they should not fear putting it to the people," says Corbyn.

He finishes his response by calling for a general election.

May notes that Conservative MPs had a free vote on the question of a second referendum during the indicative votes process, where the option was narrowly defeated.

She asks Corbyn whether he's for Brexit or against it -- and says voting for her bill is the only way to prove he backs it.