What's going on today? Prime Minister Theresa May has offered a way out of the Brexit impasse, promising cross-party talks.

What happened last night? British MPs failed to find a way out of the country’s Brexit crisis, rejecting a series of alternative plans in the House of Commons for a second time.

What happens next with Brexit? The backdrop to all of this is that Britain could still crash out of the EU without a deal on April 12 (that's in 10 days), if the UK can't come up with a plan.

As Theresa May resets her Brexit strategy, we're pressing pause on our live coverage.

Wednesday will be another crucial day. Labour lawmaker Yvette Cooper could still press ahead with her plan to take no-deal off the table, and we'll find out when Jeremy Corbyn will be meeting Theresa May to discuss Brexit.

Expect plenty of fallout in the Conservative Party too, as furious hardliners respond to May's offer to Corbyn.

As for Labour, we'll see what the party presses for in its cross-party negotiations. Could Wednesday be the day Britain moves towards a second referendum?

We'll be back to make sense of it all. You can follow the developments here.

Opposition Labour leader Jeremy Corbyn said he won't be setting any preconditions ahead of his meetings with Theresa May, but that his guiding principle would be to "avoid the dangers of crashing out" of the EU without a deal.

He added that Labour would "hold in reserve" the option of calling a no confidence motion in May's government, which could trigger a general election if it were successful. He could take that move if the government "proves it is incapable of commanding a majority in the House of Commons," he told Sky News.

Corbyn also said the question of whether the UK holds European elections isn't as significant as stopping the UK from crashing out without a deal.

"However people voted in the referendum in 2016, whether they voted remain or they voted leave, they didn't vote for lower living standards, they didn't vote to lose their jobs," he said. "And actually there's far more that unites people on both sides about the kind of society we can be than divides them."

Danish prime minister Lars Løkke Rasmussen echoed EU Council President Donald Tusk's call for patience as a cross-party plan is explored – but he sounded a note of skepticism at the prospect of success.

Theresa May's offer to bring Jeremy Corbyn into Brexit talks hasn't gone down well with the Brexit hardliners in her own party.

Conservative Member of Parliament Jacob Rees-Mogg, chairman of the European Research Group, a pro-Brexit bloc, said May had made the wrong move.

"This approach to government is an unsuccessful one and it also lacks democratic legitimacy," Mogg said in response to May's speech, according to the Press Association. "People did not vote for a Corbyn-May coalition government – they voted for a Conservative government, which became a confidence and supply with the DUP," he said, referring to the small Northern Irish party that notionally props up May's administration.

"This is a deeply unsatisfactory approach ... It's not in the interests of the country, it fails to deliver on the referendum result and history doesn't bode well for it."

Rees-Mogg said he was resolutely opposed to May's offer of talks with the opposition. "I think getting the support of a known Marxist is not likely to instill confidence in Conservatives," he added. (Jeremy Corbyn's politics sit to the far left of the Labour Party.)

Former Foreign Secretary Boris Johnson, meanwhile, expressed his anger with the strategy on Twitter. "It is very disappointing that the cabinet has decided to entrust the final handling of Brexit to Jeremy Corbyn and the Labour Party," he wrote.

"We now face the ridiculous possibility of being forced to contest the European elections more than three years after leaving the EU and having to agree to exit terms that in no way resemble what the people were promised when they voted to leave," he added.

Labour leader Jeremy Corbyn says he recognizes his "responsibility" to meet with Theresa May, after she offered to include him in Brexit talks.

Here's what he said, according to the Press Association:

"We will meet the Prime Minister. We recognize that she has made a move, I recognize my responsibility to represent the people that supported Labour in the last election and the people who didn't support Labour but nevertheless want certainty and security for their own future and that's the basis on which we will meet her and we will have those discussions."

"It’s more of the same, it always continues," one diplomat told CNN, bemoaning May's plan to a second short extension to the Brexit process.

“I think that the 27 leaders are very pragmatic and they don’t believe in dogma. They want to find a solution – especially Germany and France. They are interested in helping Theresa May."

The diplomat noted that the UK must make a choice about whether it is to take part in European parliamentary elections by April 12.

In her statement, May tried to swerve that obstacle. The Prime Minister said she'll ask for another extension that will ensure Britain has left the EU by May 22, after negotiations with the opposition Labour party and new votes in Parliament.

Diplomats seemed skeptical that the timescale would work. "She comes to Brussels and says 'I want an extension to 22nd May and I will not hold European Parliament elections' – I don’t think that will work," the diplomat said.

"It’s more of the same, it always continues," the diplomat added “The EU27 has already been very patient, the patience is not limitless ... I’m wondering what would be different on the 22nd that is different on the 12th of April."

Another diplomat echoed those sentiments:

"Theresa May is once again kicking the can down the road instead of trying to take difficult choices.... this feels like the only thing cabinet could agree on," the diplomat said.

Labour leader Jeremy Corbyn has said he is "very happy" to meet Theresa May, the Press Association reported, after the Prime Minister offered to find a cross-party path out of Britain's Brexit crisis.There were no further details about where or when the meeting would take place.

Theresa May's statement represented a significant shift in her Brexit approach, moving away from the prospect of a no-deal split and bringing opposition leader Jeremy Corbyn into the equation.

The plan will dismay the hardline Brexiteers in her own party, who for so long have opposed her Withdrawal Agreement -- and may now, as a result, lose the hard Brexit they desire.

All eyes now shift to Corbyn, the Labour leader. There's been no response from Labour yet, but his next move could shape the future of Brexit. The Prime Minister said she would attempt to forge an agreement with Corbyn that would then be put to the House of Commons.

So what will Corbyn demand in his talks with May?

A customs union: Labour party policy favors a customs union with the EU and "close alignment" to the single market. A motion to add a customs union to May's Brexit deal came the closest to achieving a majority in the Commons during the first two rounds of indicative votes this week. If Labour compromised its demand for single market alignment, it could get her deal over the line.

Common Market 2.0: This so-called "Norway Plus" model was also backed by Labour in Monday's indicative votes, and comes closest to Labour's own alternative Brexit plan. But it calls for the UK to stay in the Single Market, which would likely be unpalatable to May.

A second referendum: Corbyn took a long time to come around to the prospect of a second vote, but ultimately supported a plan from one of his backbenchers for a confirmatory vote on any deal May gets through Parliament. Could May accept a combination of a customs union plus a confirmatory referendum? It would be a huge move for her. 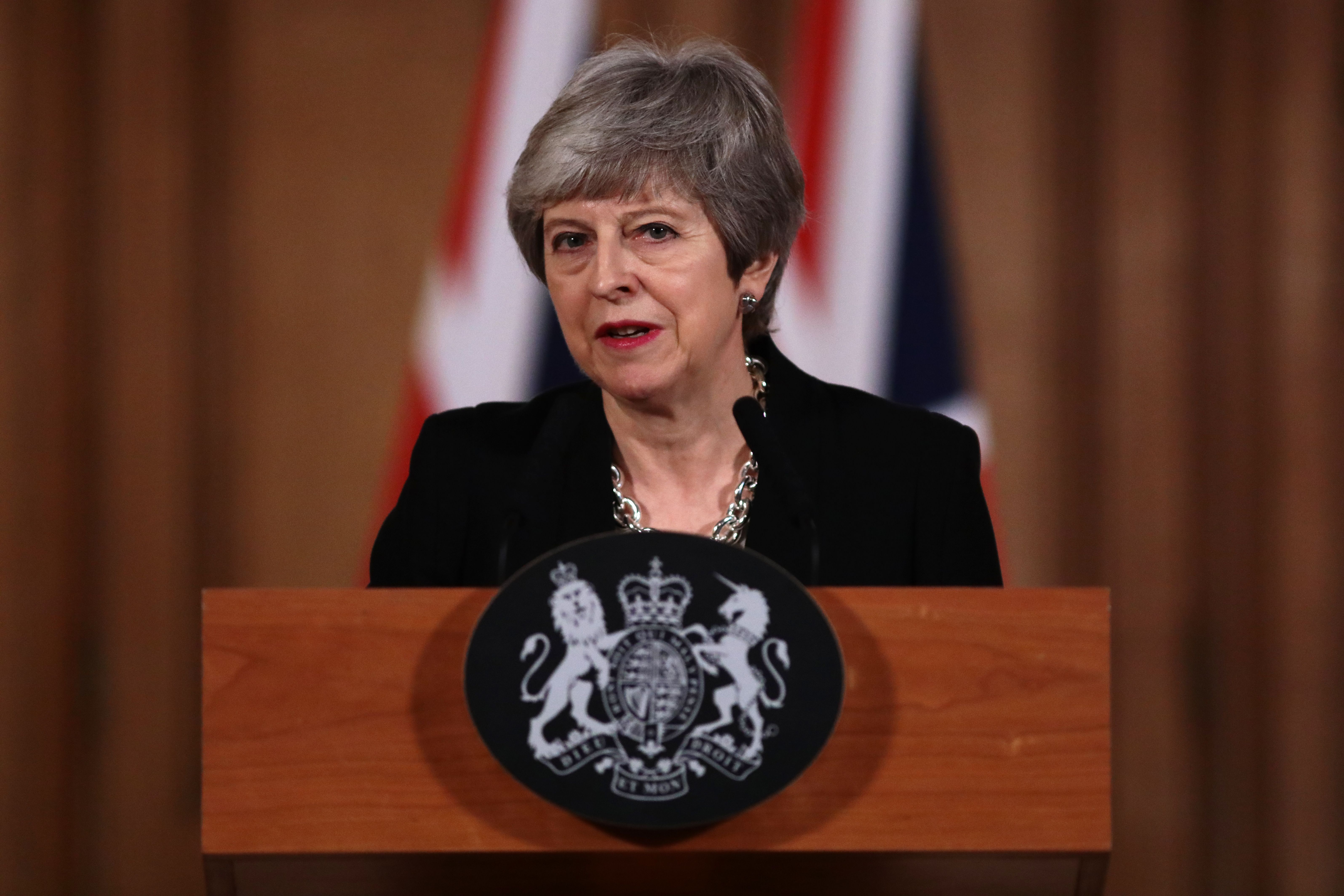 Theresa May has finally made a decision. And it’s not one her hard-Brexit allies will like.

The Prime Minister has recognized what many have been saying for weeks – that there’s no majority for her deal in Parliament.

In offering talks with the opposition Labour Party – and, crucially, offering to accept the result of any vote in Parliament – May has also recognized that she will never be able to persuade her supposed allies in the Northern Irish Democratic Unionist Party, nor a hard core of Brexiteers in her own Conservative Party.

May has picked a side, and it’s the side of a “soft” Brexit – one that envisages a closer relationship with the EU than she previously could countenance.

For some, that has always felt inevitable. With no majority in the House of Commons and her own party so bitterly divided, it was always a possibility that Theresa May was going to have to reach across the political divide.

It should never be forgotten that this is a Prime Minister who supported Remain in the 2016 referendum. Brexiteers long ago suspected that her commitment to Brexit was more of an act. Even as recently and last week, some close to the PM were trying to brief that she privately favored no deal. But no one who has followed May properly for the last three years bought it.

The political will in the UK is to avoid a no-deal Brexit. The same is true, largely, across Europe.

So this short extension, and a compromise in favor of what will likely be a softer Brexit, bows to the political winds.

But the war it might start in the Conservative Party might be terminal. A soft Brexit *and* an offer to work with the opposition leader Jeremy Corbyn, a man many Conservatives believe to be a risk to national security? Theresa May might be on her way out. But what a mess she could leave behind her.