The funeral of Queen Elizabeth II

Our live coverage has ended. Read more about the queen's funeral in the posts below.

The Long Walk, a picturesque avenue running from Windsor Castle to Windsor Great Park, is now filled to capacity with spectators, a public announcement system has told visitors.

“Unfortunately, the Long Walk is now full. You will be directed to Home Park, where there is a large screen to watch the Windsor procession and communal service,” the public announcement system told prospective visitors.

Crowds have gathered along the procession route to see the Queen's hearse passing by as as it travels to Windsor for her burial. 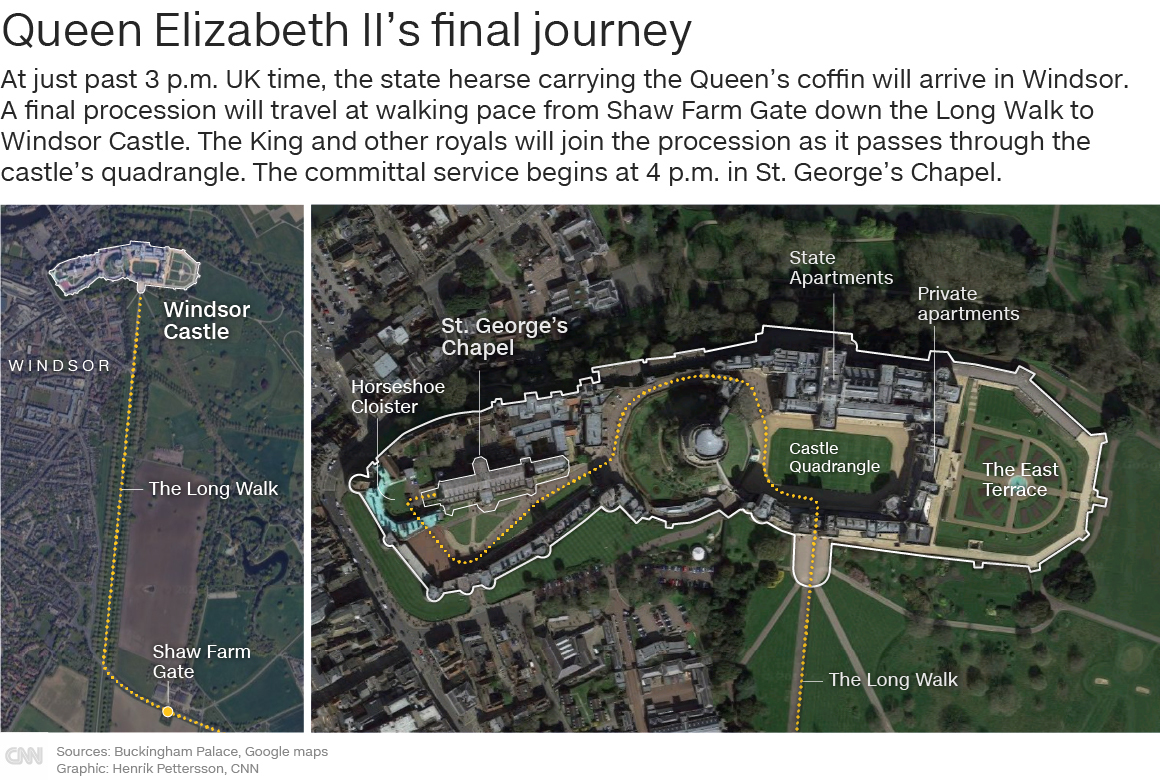 The Queen's funeral inspired a mix of emotions in crowds waiting to see the procession. Mourners were seen crying, singing the British national anthem, observing silence and throwing flowers at the Queen's hearse. Take a look at some pictures from Monday.

The Paris Metro is paying tribute to the Queen by renaming the George V station "Elizabeth II" for today, according to a tweet from the RATP Group, which is the public transit authority.

Signs in the station, which was named after the queen's grandfather, were replaced on Monday out of respect for the late British monarch.

Princess Anne, one of Elizabeth II's four children, is now following the Queen's hearse to Windsor in a car.

Anne is the only child to accompany every leg of the Queen’s final journey from Balmoral Castle in Scotland since the monarch’s death on September 8. 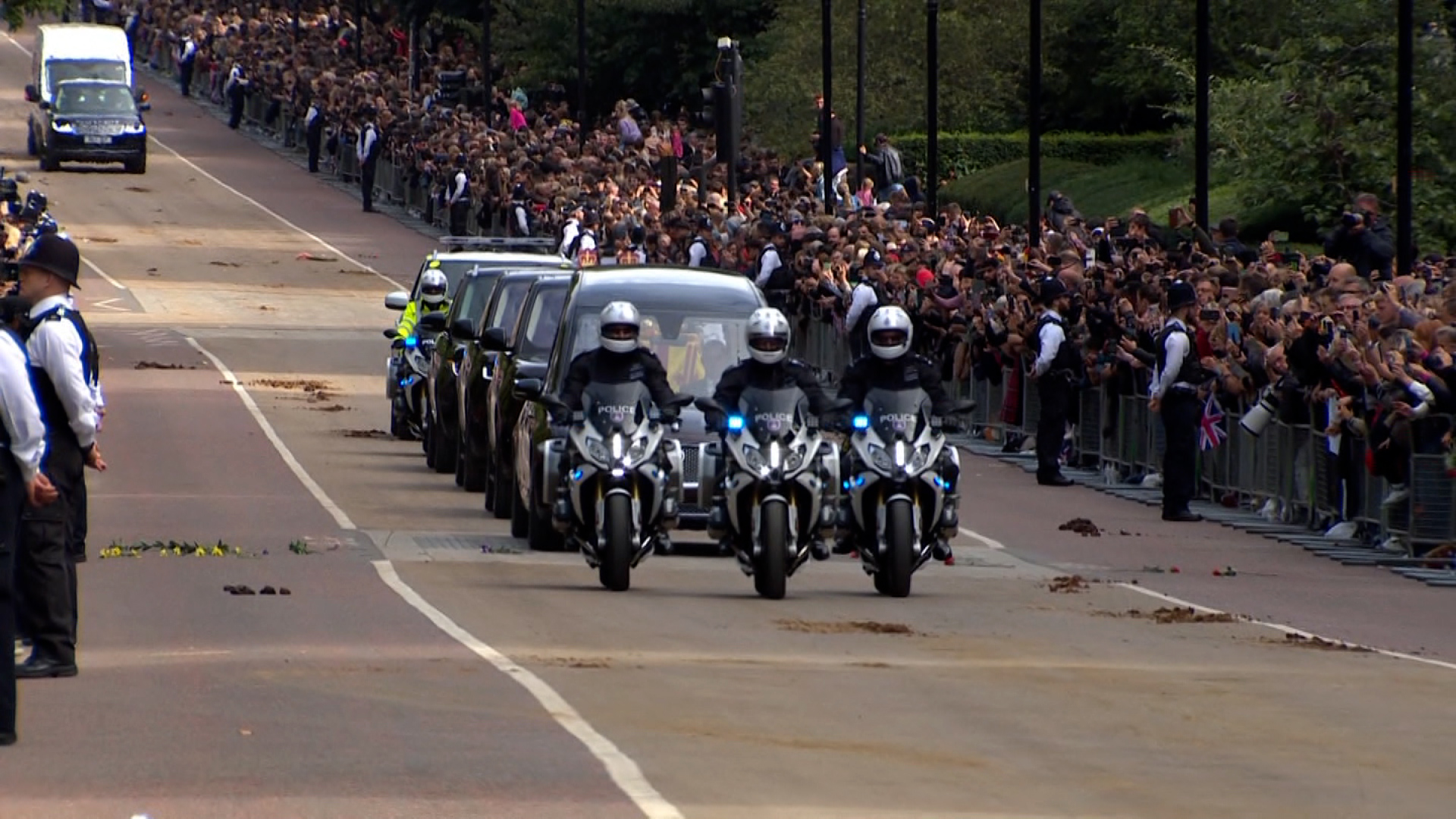 The journey of the Queen's hearse to Windsor is now underway along the crowd-lined streets of central London.

Some onlookers have thrown flowers towards the vehicle as it passes. Many are standing in silence, while others can be heard cheering for Elizabeth II one last time.

The hearse will travel along main roads rather than motorways, presumably to give more people a chance to glimpse the coffin. The route has been closed for the procession.

The Queen's coffin has been carried into the state hearse, and it will now be driven in procession through west London and to Windsor for her burial.

The royal cortege has now arrived at Wellington Arch.

Here, the parade will perform a royal salute and the British national anthem will be played before the hearse departs for Windsor and the Queen's burial.

Once it has left, the King and Queen Consort, the Prince and Princess of Wales and other members of the royal family will leave by car.

After the procession leaves, the bells at Westminster will ring fully muffled for the afternoon – a convention that only happens following the funeral of a sovereign.

The muffled bongs are achieved by attaching leather patches that dull the sound of each bell, called muffles -- a centuries-old tradition.

As the Queen's lengthy funeral procession snakes towards Wellington Arch, minute guns have been fired from London's Hyde Park.

Onlookers lining the Mall are watching as the Queen's lengthy and impressive funeral procession makes its way towards Wellington Arch.

The procession features a vast display of British and Commonwealth forces.

Queen Elizabeth II's coffin, followed by her family, have already turned around the Victoria Memorial outside Buckingham Palace and are approaching Wellington Arch.

There, the coffin will be moved to the state hearse and driven to Windsor for the burial. 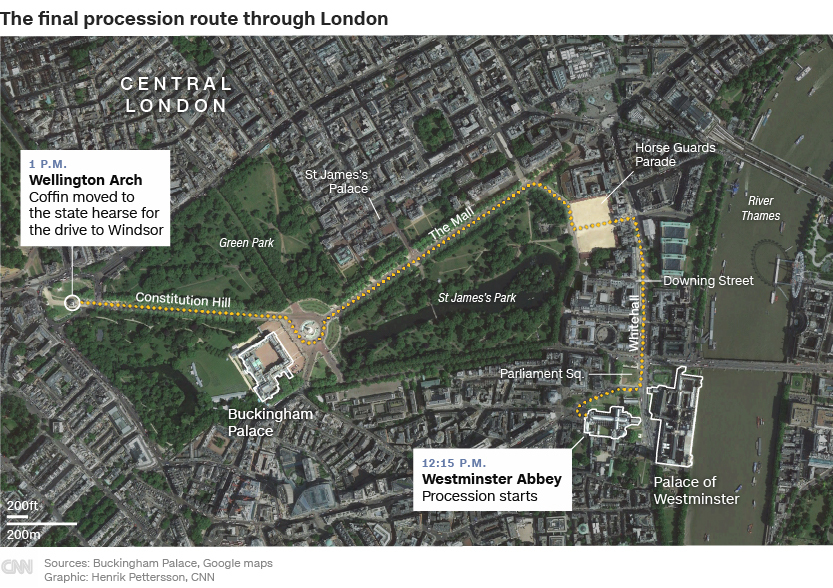