Our live coverage has ended. Scroll through the posts below to read more about Europe's heat wave or follow CNN.com.

Temperatures across much of England will be in the low 20s Celsius tonight.

Temperatures will be close to both of these records tonight.

Here's a look at tonight's forecast:

Belgium, Germany and the Netherlands recorded their highest temperatures Thursday, according to the Met Office.

The Met Office tweeted Thursday that temperatures in the UK are starting to dip slightly.

"Temperatures are now starting to dip, so it is unlikely we will have anything higher than 38.1 °C today. If this little bit of cloud hadn't pushed across the southeast this afternoon, it would have been even hotter," the tweet said.

Earlier the day, the Met Office noted that temperatures reached 38.1 Celsius (100.5 degrees Fahrenheit) in Cambridge — only the second time temperatures over 100 Fahrenheit have been recorded in the UK.

Amanda Brooke, who took a video of her dog Mouse playing in the ice storm, said it was so hot and had been feeding her dog ice cubes earlier in the day.

"She loves throw and catch games and thought it was great fun trying to catch the hail stones," Brooke said.

The cool down starts: Liverpool was supposed to hit a high of 31 Celsius (88 degrees Fahrenheit), but things might be cooling down soon.

The Met Office tweeted that thunderstorms are starting to roll into the Kent area from across the English Channel.

A heat wave is gripping Europe and at least 12 countries are experiencing record-breaking temperatures.

Meteorologists say that Europe is on track for the hottest July on record, following the warmest June since records began in 1880.

A British train company is urging people not to travel today after extreme heat caused problems with the tracks.

East Midlands Trains tweeted their trains were "unable to run" on at least one route after overhead lines came down. They also warned of more delays because of speed restrictions and altered train schedules, saying "we advice customers NOT TO TRAVEL today."

Not only is extreme heat inconvenient for travel, it can also be dangerous.

The temperature of the steel tracks is set to exceed 50 Celsius (122 degrees Fahrenheit) in and around London, according to Network Rail. When the tracks get this hot, they could buckle.

Britain's railway tracks are able to cope with up to 27 Celsius (80 degrees Fahrenheit), the average summer rail temperature in the UK.

But air temperatures are forecast to possibly reach a record of 39 Celsius (102 degrees Fahrenheit) in England on Thursday, meaning the steel from the tracks could expand “and rails can bend, flex and, in serious cases, buckle.” 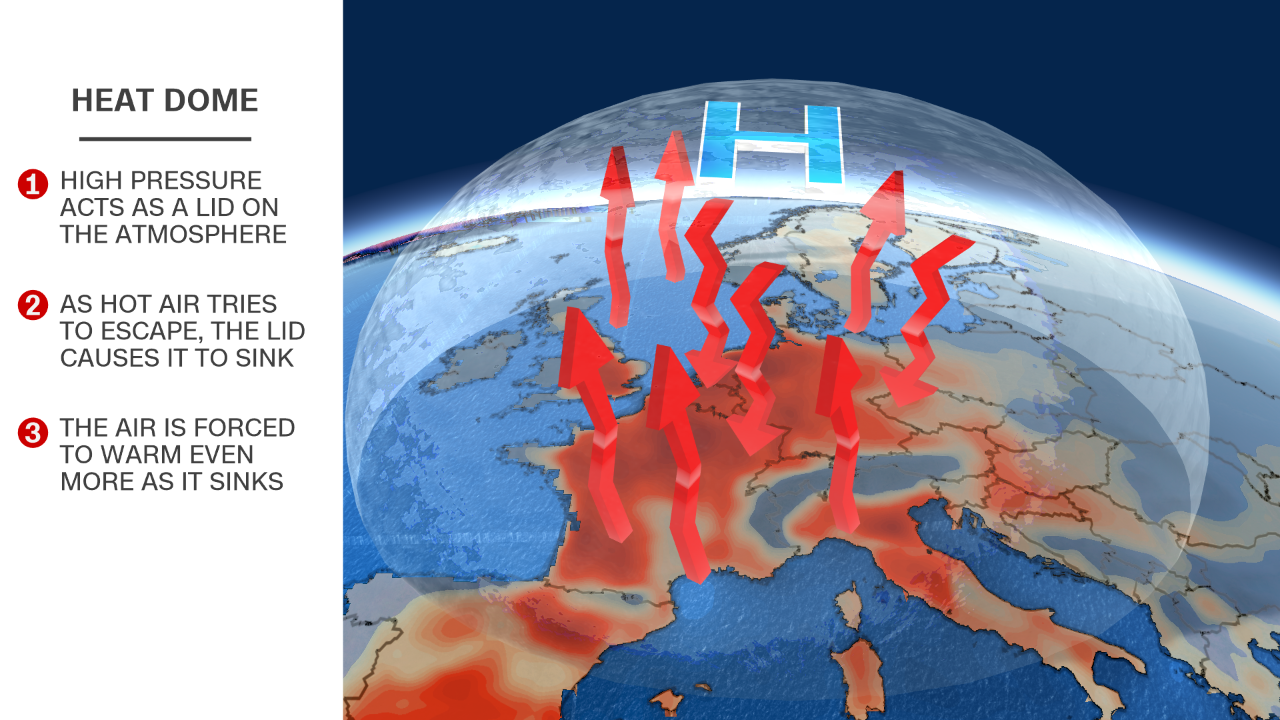 The heat wave hanging over Europe is being caused by a meteorological effect know as an "omega block," a high pressure area that sits in one place for a long period of time.

The phenomenon is named after the Greek letter Omega (Ω) for the way it changes the jet stream air current in our atmosphere.

A strong omega block has currently settled in over western Europe and is producing a dome over the region, acting like a lid.

This type of block can get stuck in one place for weeks, and, in this case, very hot air from the Sahara Desert in northern Africa is getting trapped under the dome, causing record temperatures.

Forecasters expect that this pattern will slowly shift, allowing the hot air to migrate north into Scandinavia and the Arctic.

The UK’s trade unions are urging businesses to allow flexible working conditions and dress codes amid record-breaking temperatures, according to a statement from the Trade Union Congress (TUC).

The TUC has called on employers to allow staff to come in earlier or stay later to avoid the highest temperatures of the day, and also to lessen the crush during the rush-hour commute.

They also suggested that employees who could should be allowed to work from home.

Other suggestions included allowing staff to relax their workplace dress codes and take frequent breaks, as well as to provide a steady supply of cold drinks.

While there is no law for minimum or maximum working temperatures, as the TUC statement outlined, it did underscore that workplace temperature conditions must be "reasonable" for all.