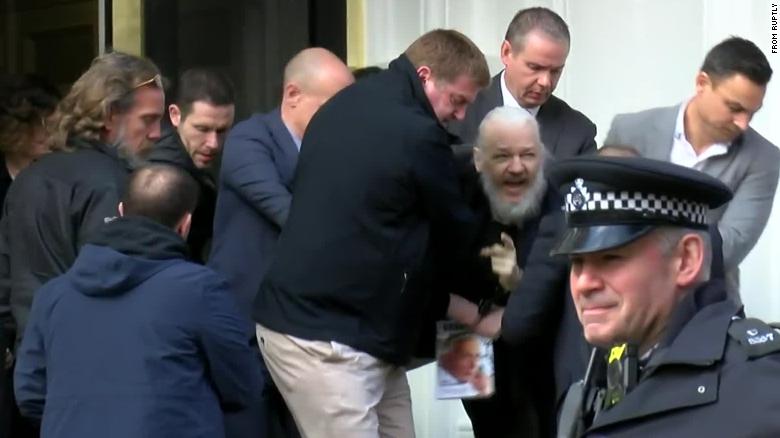 When 47-year-old WikiLeaks founder Julian Assange finally left the Ecuadorian embassy after seven years, the focus was largely on his appearance and what he was screaming as he was bundled into a police van.

But eagle-eyed observers noticed that as he was hauled away, he was clutching a book titled "Gore Vidal: History of the National Security State." According to the Amazon listing, it's a collection of interviews with the American literary legend, who chronicled major cultural shifts in the United States.

The book, according to Amazon, details "the historical events that led to the establishment of the massive military-industrial-security complex and the political culture that gave us the 'Imperial Presidency.'”

When Assange sat down in a London court in the past hour or so, he still had the book with him, and made a show to the media of reading from it.

Assange has appeared inside the courtroom at London's Westminster Magistrates Court. Wearing a dark suit with his hair tied back and crisp white beard, he gave a thumbs up to the press.

He appeared calm and confident as the judge asked him where his lawyers were.

The US Department of Justice has confirmed Julian Assange has been indicted on conspiracy with Chelsea Manning to commit computer intrusion in 2010.

“The indictment alleges that in March 2010, Assange engaged in a conspiracy with Chelsea Manning, a former intelligence analyst in the US Army, to assist Manning in cracking a password” on classified DoD [US Department of Defense] computer systems, according to a Justice Department press release.

The indictment -- unsealed Thursday -- was signed last year on March 6.

Earlier Manning's lawyer expressed hope that Assange's arrest on Thursday in London could open the door to Manning's release from incarceration.

Moira Meltzer-Cohen, an attorney for Chelsea Manning, said: “Were he to be extradited [to the US] we hope it would signal her release but that is not, unfortunately, a foregone conclusion.”

Manning served about seven years in prison for her disclosure of US military and diplomatic secrets to WikiLeaks in 2010, before being released in May 2017.

But Manning was jailed again in early March of this year, when a judge held her in contempt for refusing to testify before a grand jury about those disclosures.

Her testimony appeared to be part of an effort by federal prosecutors investigating Assange.

This post has been updated to correct the date the indictment was signed.

While we wait for proceedings to get underway at Westminster Magistrates Court, over at the UK House of Commons, British Prime Minister Theresa May has opened her appearance by welcoming the arrest of Julian Assange.

She said that he was “arrested for breach of bail after nearly seven years in the Ecuadorian embassy. He has also been arrested in relation to an extradition request from the US.”

“I would like to thank the Metropolitan Police for carrying out their duties with great professionalism and to welcome the cooperation of the Ecuadorian government in bringing this matter to a resolution. Mr Speaker this goes to show in the UK, no one is above the law,” the Prime Minister said.

Julian Assange has arrived at Westminster Magistrates Court, a CNN producer at the court has confirmed. He is now inside the building but the courtroom is yet to open.

His lawyers will be Liam Walker (for the breach of bail charges) and Ben Cooper (for the US extradition request), the law firm Doughty Street Chambers tweeted. Jennifer Robinson will also appear with him, they said.

British Foreign Secretary Jeremy Hunt said Thursday that Julian Assange is “not above the law” and that he is “no hero.”

“What we’ve shown today is that no one is above the law. Julian Assange is no hero. He has hidden from the truth for years and years and it is right that his future should be decided in the British judicial system,” Hunt said.

He praised Ecuador’s President Lenin Moreno’s “very courageous decision … to resolve this situation that has been going on for nearly seven years.”

The statute of limitations for the alleged crimes does not expire until August 2020, she said.

Sweden dropped the case in May 2017. Assange has denied all the allegations.

Julian Assange has always feared extradition to the United States in connection to his work with WikiLeaks. That concern has been a key reason he remained holed up in the relative safety of Ecuador’s central London embassy.

The nearly-decade long battle between the US Justice Department and Assange and WikiLeaks dates back to at least 2010, when the site posted thousands of files stolen by the former US Army intelligence analyst now known as Chelsea Manning.

Then in 2013, US investigators also found what they believe was proof that WikiLeaks played an active role in helping Edward Snowden, a former NSA analyst, disclose a massive cache of classified documents.

More recently, WikiLeaks had been a focus of special counsel Robert Mueller's investigation of any links between President Donald Trump's associates and Russian efforts to interfere in the 2016 presidential election. WikiLeaks posted thousands of emails stolen from Democrats by Russian agents during the election.

Embarrassingly, a bungled US court filing in November revealed the US' efforts to criminally charge Assange.

On Thursday, one of Assange's lawyers confirmed the WikiLeaks founder had been arrested on behalf of the US.