Video footage captured the dramatic moment Julian Assange was hauled out of the Ecuadorian embassy after seven years inside.

Police officers could be seen carrying the 47-year-old Australian out of the embassy as he gesticulated and shouted, though it was difficult to make out what he said. Officers then made a beeline for the waiting police van.

WikiLeaks does not know where Julian Assange is right now, a WikiLeaks source told CNN.

Relations inside the Ecuadorian embassy have been deteriorating for months.

It has been seven years since Julian Assange fled to the country's diplomatic mission in Knightsbridge, yards from the world-famous Harrods department store, facing extradition to Sweden on sexual assault allegations that he denied.

Thursday's arrest perhaps comes as little surprise after WikiLeaks held a press conference earlier this week accusing staff at the Ecuadorian embassy of spying on him.

Since Ecuadorian President Lenin Moreno took office in 2017, Assange had repeatedly claimed his living situation within the embassy was becoming increasingly hostile, with the country trying to make life more difficult in a bid to force him to vacate the premises.

Moments after news of Julian Assange's arrest broke, British Home Secretary Sajid Javid tweeted thanks to Ecuador for their cooperation.

The first photographs showing the arrest of Julian Assange in central London on Thursday have started to cross. 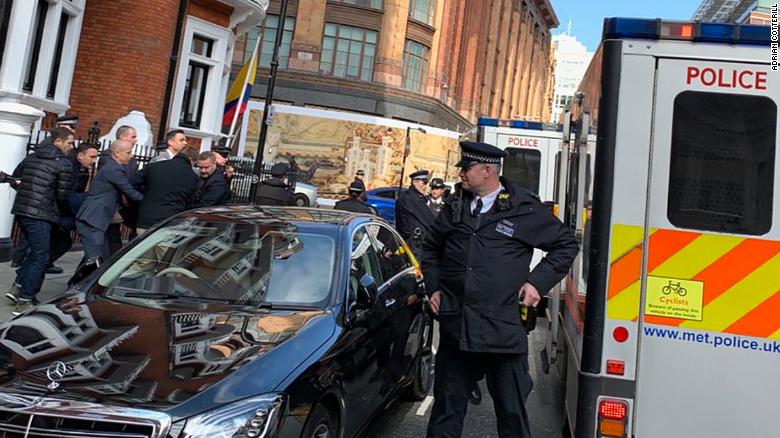 Here's the full statement from London's Metropolitan Police on the arrest of Assange:

Julian Assange, the 47-year-old WikiLeaks founder, has been arrested in London.

Assange had been living in the Ecuadorian Embassy in central London in 2012 while wanted for questioning over sexual assault allegations in Sweden.

The Swedish case may have since been shelved but he was still wanted by British authorities for jumping bail.

Assange maintained his innocence and claimed the charges were nothing more than an attempt to extradite him to the United States.