Our live coverage of the climate change protest in London has ended. Scroll through the posts below to see how it unfolded or read more about it here.

Three men have been arrested on suspicion of criminal damage at the Shell Center in London's Lambeth borough after Extinction Rebellion demonstrators glued themselves to the entry, smashed a glass door and spray-painted graffiti on the building's exterior, the Metropolitan Police confirmed to CNN.

In a tweet, Shell UK asked protesters to keep "their safety and the safety of others in mind."

Protesters gathered outside Britain's Houses of Parliament said politicians should focus their energy on tackling climate change, not Brexit.

Niki Shahab and Imogen Gaskell, both students from London, told CNN politicians have been preoccupied with Britain's withdrawal from the European Union since the country voted to leave in a 2016 referendum.

They said British politicians should really be tackling the climate crisis.

"It is an emergency, it’s going to affect everyone, people don’t realize how important climate change is. In the UK for example, floodings are going to increase, and abroad it will fuel more refugee crises," Gaskell said. “We’ve been focusing on Brexit for the last two years, at the end of the day it doesn’t matter what your political views are, climate change will affect everyone of us."

Climate activists are warning of the catastrophic effect that a global extinction of insects could have on the planet.

Andrea Cox, a careers consultant from London, joined the demonstration in front of the Houses of Parliament on Monday carrying a flag emblazoned with a bumblebee.

“Bees are the main pollinators of plants and flowers and numbers have dropped dramatically. If our bees disappear, our food disappear. We need to do something to ban pesticides ... the numbers of flies, wasps, bees are massively declining ... you don’t notice it unless you have a garden or a farm," Cox told CNN. "We are planning to do this [protest] until government talks to us and commits to go carbon neutral by 2020. Until that happens we are here day and night, we are not moving.”

A report published earlier this year in the journal Biological Conservation suggested that insect populations were declining worldwide, forecasting that more than 40% of species could become extinct in the next few decades.

Insect biomass is declining by a staggering 2.5% a year, a rate that indicates widespread extinctions within a century, the report found.

Environmental group Greenpeace has lent its support to the Extinction Rebellion demonstration, sharing video of protesters gathered outside London's Houses of Parliament.

Central London is blocked off today by thousands of protesters demanding action on climate change.

So far Extinction Rebellion, the group organizing today's demonstrations, has counted 222 arrests since launching last year — and thousands have declared they are willing to be arrested, or even go to prison, to demand action on climate change. 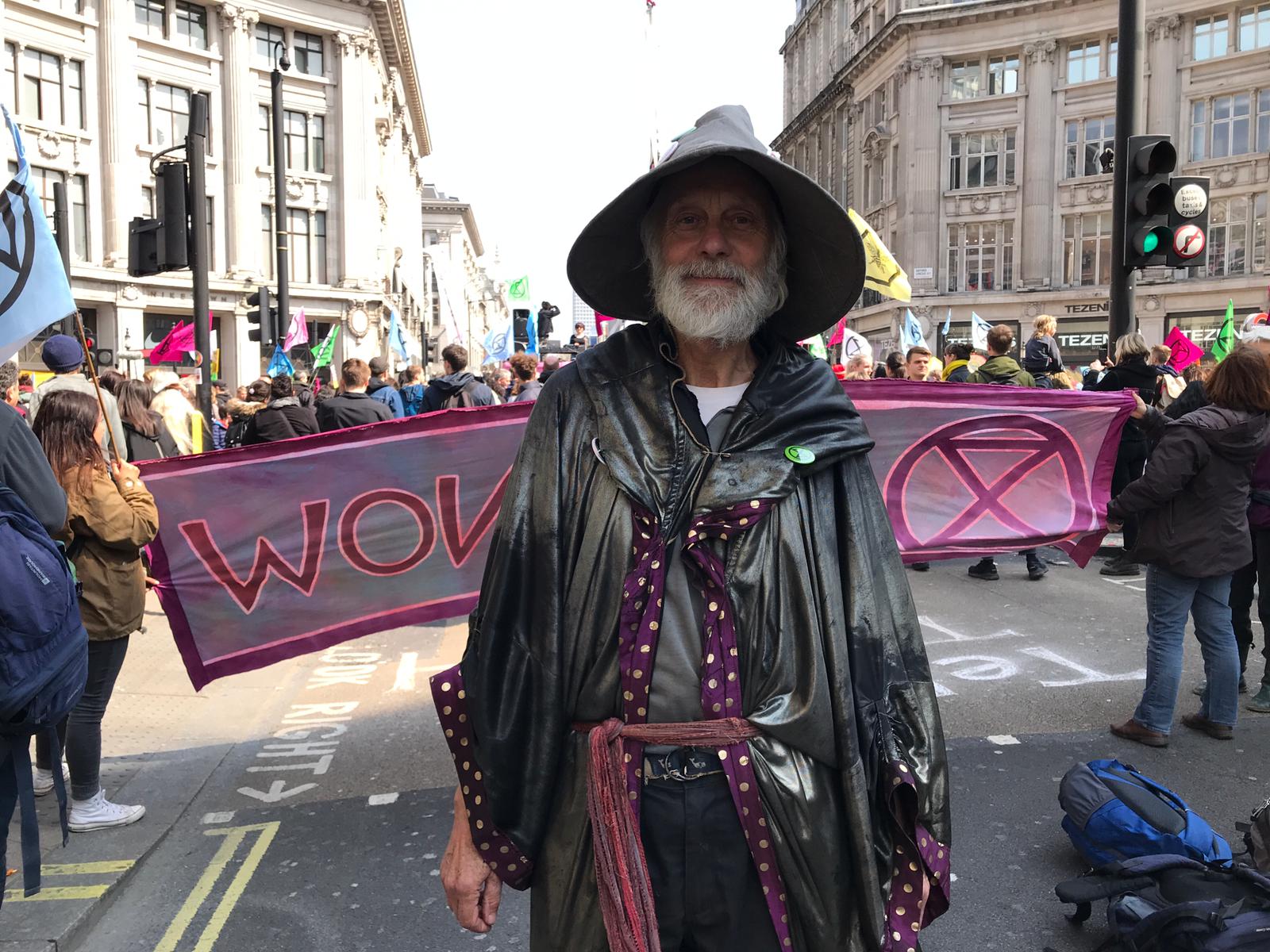 Rick Guest, a demonstrator from Herefordshire in England's West Midlands, said he had joined the protest in Oxford Circus dressed as a wizard because "this is a rebellion."

"I'm here because this is a rebellion and the state of the planet is pretty dire. The evidence is irrefutable," Guest told CNN. "We know what's going on. We know the solutions. Why isn't anything happening. Governments and oil companies are in bed with each other. We've got 11 years to turn it round, that's why we're all here. I'm from Herefordshire, so I'm from the 'Shire. Gandalf rides out to save the 'Shire doesn't he. We're on a mission."

Extinction Rebellion demonstrators descended on Waterloo Bridge with trees and flowers, setting up an impromptu garden blockade on Monday. Others set up a miniature skate park.

Photos and videos shared on social media showed some protesters outside London's Shell Center near Waterloo Bridge on Monday.

While some demonstrators glued themselves to the revolving front door, others scrawled Extinction Rebellion's hourglass symbol in graffiti and smeared black paint on the exterior of the building. The protesters also smashed a glass door.

A Shell spokesman told CNN: "We respect the right of everyone to express their point of view, we ask only that they do so with their safety and the safety of others in mind."

London's Metropolitan Police said in a statement that policing plans were in place to support public order during Extinction Rebellion demonstrations over the coming weeks, and advised those traveling in the capital to allow for extra journey time.