The funeral of Prince Philip, the Duke of Edinburgh

Our live coverage of the funeral has ended for the day. Follow along here for more updates.

Like many other occasions this past year, Philip's funeral has been heavily adapted because of coronavirus -- with all public elements removed.

Members of the public have been asked to stay away from funeral events because of the pandemic. Despite calls from both the family and local authorities, some mourners are gathering outside the castle walls at Windsor.

The Queen, attended by a lady in waiting, departed from the sovereign's entrance in the state Bentley.

The Duke of Edinburgh's coffin is being brought out of the Inner Hall by a bearer party made up of The Queen’s Company, 1st Battalion Grenadier Guards. The coffin is draped in Prince Philip's Royal Standard flag.

Atop the coffin sits a wreath of flowers which the Queen selected as well as the duke's naval cap and sword.

Patrick Jephson, former private secretary and chief of staff to the late Princess Diana has said that Philip's funeral could be an opportunity for an affectionate reconnection between Prince Harry and Prince William, between whom there has been tension reported in recent years.

Jephson said: "Funerals can be a great opportunity for families to heal this kind of rift."

"I think most people are hoping that there will be a chance for the brothers seeing each other for the first time in more than a year to at least establish some kind of affectionate re-connection," he said.

Military personnel involved in the procession are getting into position in the quadrangle and other areas around Windsor Castle.

The quadrangle will also be lined by the Household Cavalry and The Foot Guards.

Some context: You may remember the location from other royal events -- like when the Queen greeted former US President Donald Trump when he visited the UK in 2018.

As a mark of respect, those involved will participate have bowed their heads as they wait for the events to begin.

Family members who are not involved in the procession are arriving at St. George's Chapel now by car.

When the procession is underway, they will join the 94-year-old monarch to watch the funeral parade outside the chapel's Galilee porch as it passes.

Prince Charles and other members of the royal family will trail the Land Rover on foot, while staff from Philip's household bring up the rear.

William and Harry will reunite to walk in the same row, but will be separated by their first cousin Peter Phillips -- the son of Princess Anne.

The day will be about the Duke of Edinburgh but recent family tensions following the Sussexes' Oprah Winfrey interview means that royal-watchers will be looking at how the brothers interact.

The pair would usually walk shoulder to shoulder, and in the lead-up to Saturday's event Buckingham Palace would not be drawn on the subject. 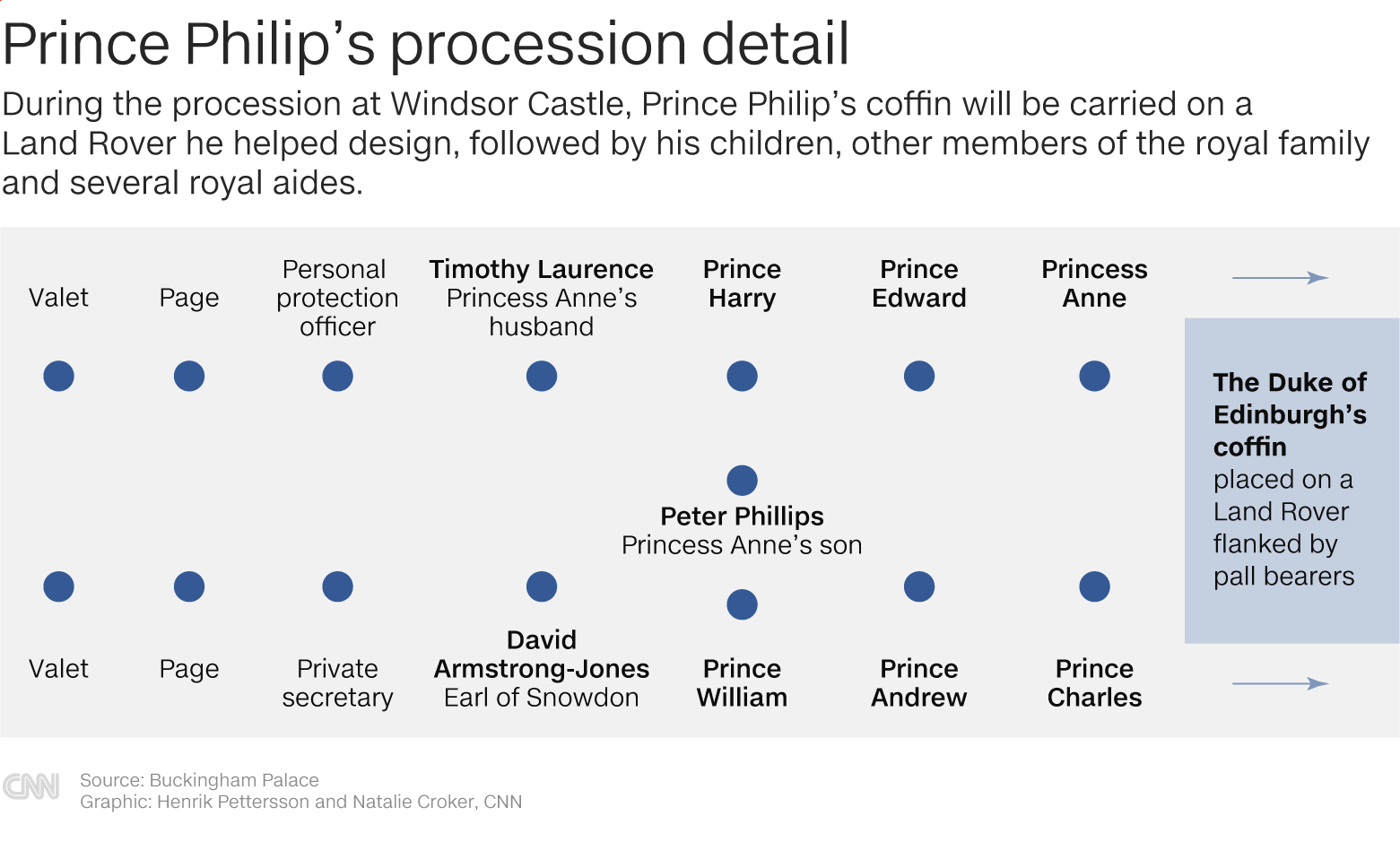 The Queen, accompanied by a lady-in-waiting, will travel to the chapel in a state Bentley.

Family members who are not involved in the procession, such as the Duchess of Cornwall and Duchess of Cambridge, will join the 94-year-old monarch to watch the funeral parade outside the chapel's Galilee porch.

This also includes the duke's German relatives who will be in attendance, including his great nephews, the Hereditary Prince of Baden and the Prince of Hohenlohe-Langenburg.

The coffin of the Duke of Edinburgh will be carried the short journey from the state entrance of Windsor Castle to St. George's Chapel in a modified Land Rover that he helped design.

It will be flanked by pallbearers highlighting his relationships with the Royal Marines, Regiments, Corps and Air Stations. Philip, a war hero decorated for his service in World War II, gave up a flourishing naval career to dedicate himself to his royal duties.

The duke began using the polished dark green Land Rover at the age of 91 for riding around Windsor and other royal estates, according to PA news agency. The carriage, made of aluminum and steel, was built to his own specifications eight years ago.

Today's funeral for the Duke of Edinburgh may be a stripped-back royal event but it will still retain the colorful traditions of a royal funeral and "are a reflection of The Duke's military affiliations and personal elements of His Royal Highness's life," a Buckingham Palace spokesman said Thursday.

The funeral will be proceeded by a ceremonial procession that will step off at 2:45 p.m. (9:45 a.m. ET). Here's an overview of the route, which will parade through Engine Court, Chapel Hill, the Parade Ground and Horseshoe Cloister.

It will be lined by personnel from the Royal Navy, the Royal Marines, the Highlanders and the 4th Battalion Royal Regiment of Scotland and the Royal Air Force. 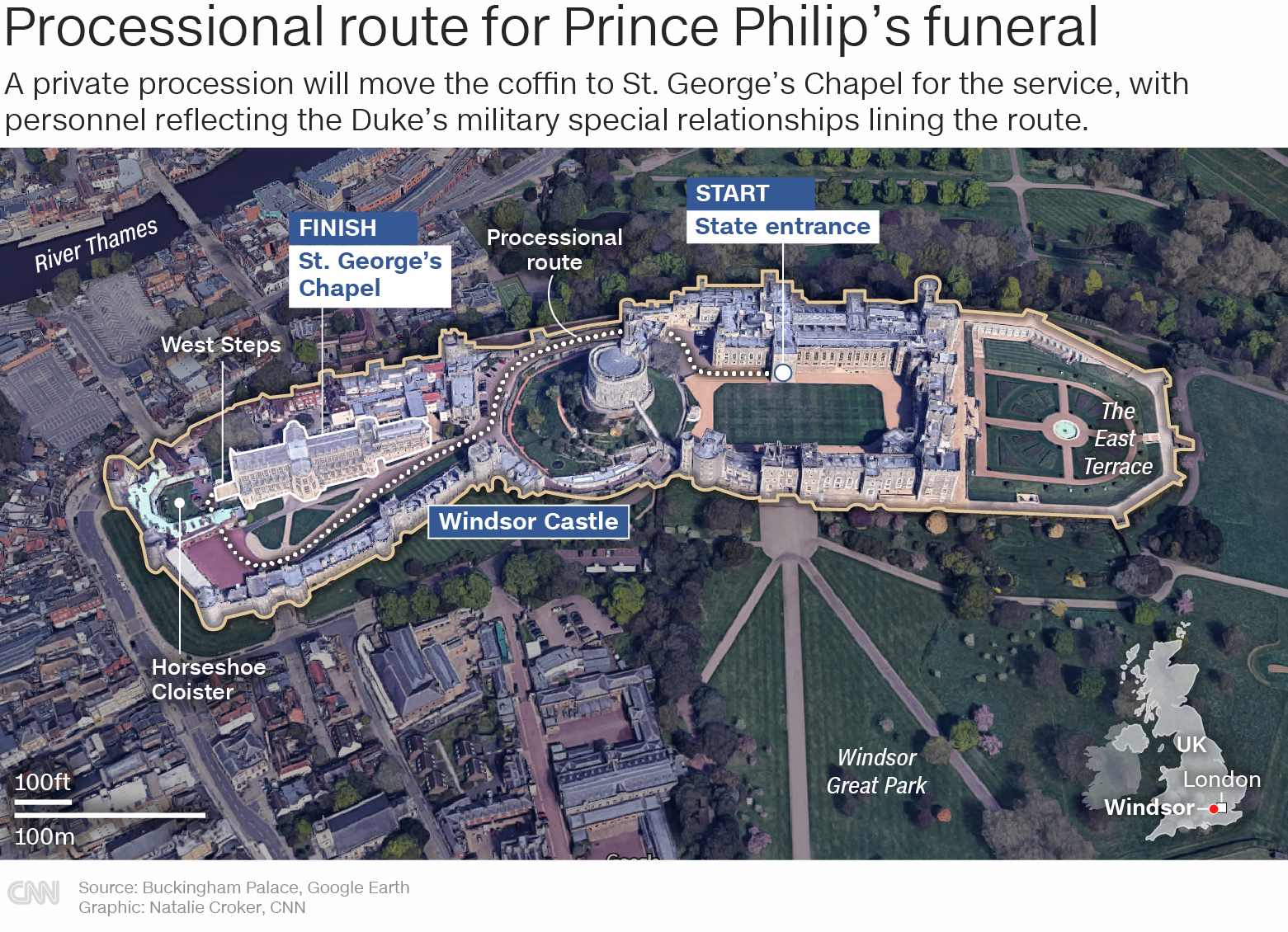