The death of Queen Elizabeth II

A woman who gave King Charles III a peck on the cheek as he greeted the crowd before entering Buckingham Palace told CNN why she decided to kiss him.

"I couldn't believe it and I said to him, 'may I kiss you?' And he said, 'well, yes.' So I grabbed him, and I'm very happy," Jenny Assiminios told CNN's Max Foster.

"It never crossed my mind" that she'd ever kiss a king, she said, adding that he looked sad and it was "just a feeling" that came over her to comfort him as he mourns his mother.

She said she loves the royal family and follows their lives.

Other people in the crowd earlier shook hands with the King and shouted well-wishes to him.

King Charles III and his wife Camilla, the Queen Consort, have entered Buckingham Palace after greeting crowds of well-wishers and viewing flowers left in honor of his mother, Queen Elizabeth II.

Charles smiled and shared brief words with many of the people who had lined up to greet him. He took flowers and even received a kiss on the cheek.

The Royal Standard flag has been raised, indicating the monarch is present at the Palace.

King Charles III will address the nation and the Commonwealth at 1 p.m. ET (6 p.m. local time), a statement from Buckingham Palace said on Friday.

A transcript of the message will also be available from Press Association, the statement said. 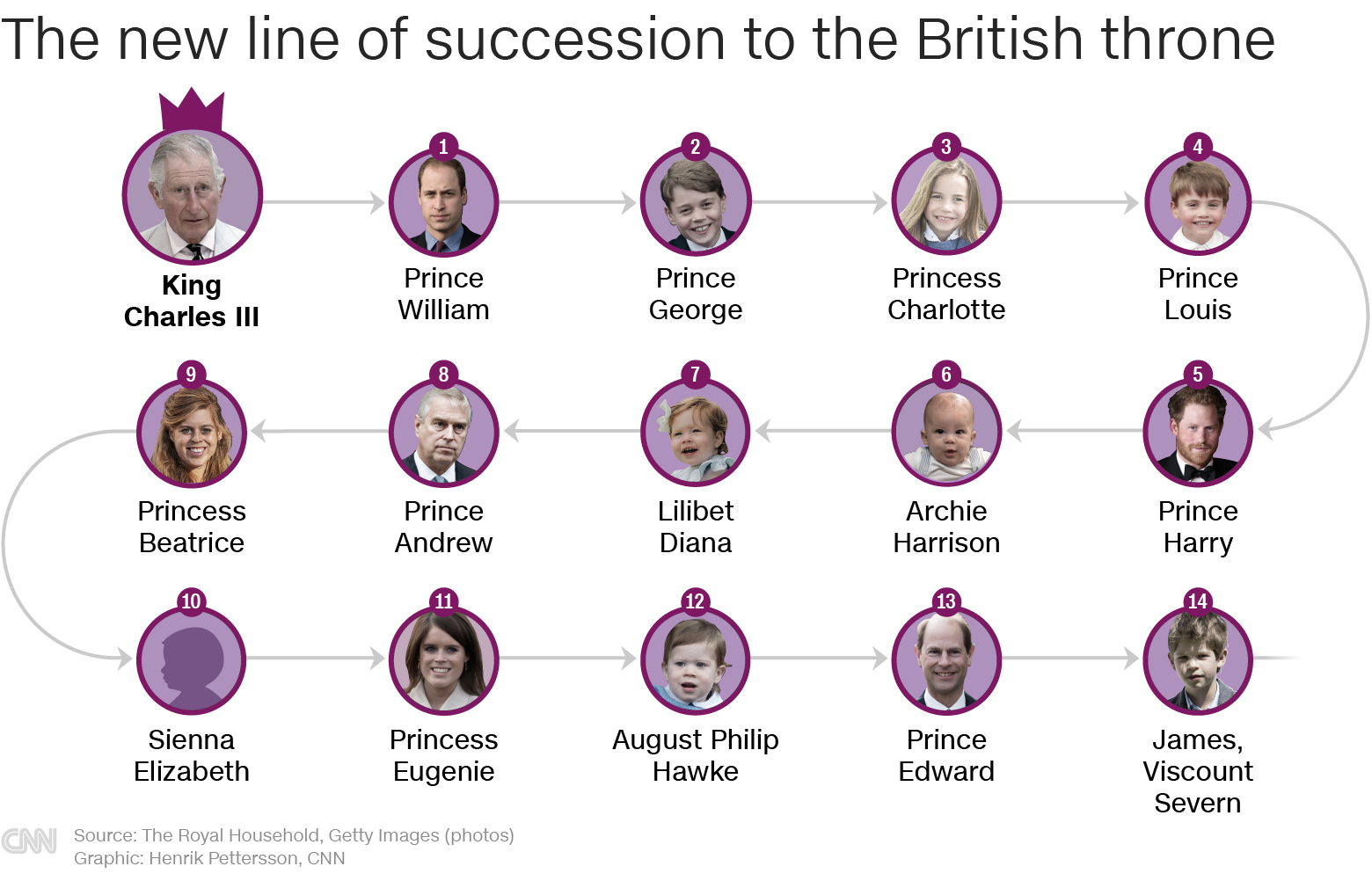 With the death of Queen Elizabeth II, her son, Charles, immediately became King.

Here’s what we know about the British royal family’s line of succession.

What to know: First in the line of succession, Charles was the longest serving British monarch-in-waiting; he’s been the heir apparent since the age of 3. As president of The Prince’s Trust and the Royal Shakespeare Company, and president or patron of more than 400 charitable organizations, the Prince of Wales is the first royal heir to earn a university degree.

More key relatives: Diana, Princess of Wales, to whom he was married from 1981 to 1996. They had two children together: Princes William and Harry.

Diana died in 1997 following a car accident in Paris, along with boyfriend Dodi Fayed and driver Henri Paul.

In 2005, the Prince of Wales married Camilla, the Duchess of Cornwall.

What to know: Prince William, next line to the throne after his father Charles, has achieved the highest educational degree – Masmer of Arta – of any member of the royal family. He served in the military from 2006 to 2013, participating in more than 150 helicopter search and rescue operations.

More key relatives: Catherine, Duchess of Cambridge, whom he married in 2011. The couple have three children together: Prince George, 9; Princess Charlotte, 7; and Prince Louis, 4.

The family live in Adelaide Cottage, a four-bedroom property in the grounds of Windsor Castle, Berkshire, about 25 miles from London. The Cambridges’ London residence, Kensington Palace, will remain the family’s principal residence, however, a royal source told CNN in August.

What to know: When Prince George arrived, he became third in line to inherit the throne. If he becomes king after the reigns of his grandfather Prince Charles and his father Prince William, George will be the 43rd monarch since William the Conqueror.

But for now, he’s still brushing up on his education: George currently attends Lambrook School near Windsor along with his younger sister, Charlotte and his younger brother, Louis.

The new monarch greeted the well-wishers and shook many people's hands, with some attendees saying, "We love you, King Charles!"

Some people could be heard singing "God save our gracious king," the first line of the British national anthem.

With her husband's accession to the throne following the death of Queen Elizabeth II on Thursday, Camilla has become Queen Consort and will take on a new and more prominent role alongside King Charles III.

Just over 25 years after the death of Charles' first wife, Diana, Princess of Wales, Camilla remains a divisive figure in Britain.

Born Camilla Shand in July 1947, she reportedly met Prince Charles at a polo match in Windsor in 1970 and they became friends.

The following year Charles joined the Royal Navy and, while he was away, Camilla married cavalry officer Andrew Parker Bowles. The couple had two children during the 1970s.

Charles married Lady Diana Spencer in 1981, but he admitted in 1994 that he had been having an extramarital affair with Camilla.
Camilla divorced from Andrew Parker Bowles in 1995. Charles and Diana divorced the following year and Camilla all but vanished from public life as public and media support swung behind the princess. The pro-Diana, anti-Camilla sentiment was compounded by the outpouring of sympathy for Diana after she was killed in a high-speed car crash in Paris in 1997.

In 1999, Clarence House embarked on a program to reintroduce Camilla to the public with a carefully orchestrated first appearance with Charles outside the Ritz Hotel in London. She moved into Clarence House to be with Charles and her name started appearing on official paperwork.

Their story reached its climax in 2005, when they were wed in Windsor, with the Queen's consent. Camilla, now known as Her Royal Highness the Duchess of Cornwall, was confirmed as Charles' official consort and future queen of the United Kingdom.

The duchess threw herself into life as a senior royal, supporting Charles on official engagements in the UK and on overseas tours, despite her deep fear of flying. She quickly became an asset for the royal family and British government with her common touch and ability to dissipate the tension in a room.

The moment her husband became king, Camilla automatically became queen. However, it had long been thought that she wouldn't use the title, Clarence House having issued a statement in 2005 saying that she would instead be known as "Princess Consort." Some in the palace at the time felt the public wasn't ready for Camilla to take a title that had been destined for Diana.

But over the years, attitudes towards Camilla have softened. In 2015, a CNN poll found that one in four Britons had grown to like her more and fewer people opposed her becoming known as queen.

Then, in February 2022, the Queen used the landmark milestone of her Platinum Jubilee to give her blessing for the Duchess of Cornwall to be known as queen when the time came. It was a hugely significant intervention from the monarch, the only person who can define royal titles.

The plane carrying King Charles III has landed at RAF Northolt, a military airbase near London.

He is making his way to the UK capital from Balmoral Castle, and will address the nation later.

All weekend football fixtures previously scheduled in England, Northern Ireland and Scotland have been postponed as “a mark of respect,” following the death of Queen Elizabeth II.

The WSL had been ready for a major launch of its new season, hoping to capitalize on the soaring popularity since the women's Euros this year.

All flags at Wembley Stadium and St. George’s Park will continue to fly at half-mast over the weekend, according to the FA.

It comes as the sporting world responds to the death of the monarch. Horse racing in the United Kingdom has been halted and the second day of the PGA Championship golf tournament has been put on hold.

Scottish FA president Rod Petrie announced the decision in a statement saying that after discussions, "it was agreed that this was the appropriate step to take" after the Queen's death.

Earlier on Friday, the Northern Ireland Football Association announced this weekend’s fixtures across all affiliated football in the country.

Separately, the English professional rugby union, Gallagher Premiership has postponed Friday’s season opening fixtures, and the Welsh Rugby Union has suspended all senior rugby matches in Wales for the weekend.

Former British Prime Minister Theresa May has said the Queen was a "thoughtful hostess" during weekends at Balmoral Castle in Scotland, recalling stories from their time together at the estate.

May said the Queen "wanted all her guests to enjoy themselves,"

"She would take an interest in what books were put in your room. And she didn't always expect to be the center of attention. She was quite happy to sit sometimes playing her form of patience while others were mingling around her," May said.

She recalled the Queen driving May and her husband around the Balmoral estate, which she said Philip May likened to being in a dream.

"Her Majesty loved the countryside, and she was down to earth and a woman of common sense," the former leader said.

May recalled a picnic at Balmoral, during which she dropped some cheese on the ground, before attempting to sneakily pick it up, dust it off, and place it back on the table.

"I turned around to see that my every move had been watched very carefully by Her Majesty the Queen. I looked at her, she looked at me, and she just smiled. And the cheese remained on the table," May said, to laughs in the Commons.

May served as Prime Minister from 2016 to 2019, in the aftermath of Britain's vote to leave the European Union.

She also recalled her weekly audiences with the Queen, which the monarch held with every Prime Minister throughout her reign. "These were not meetings with a high and mighty monarch, but a conversation with a woman of experience and knowledge, and immense wisdom," May said.

"They were also the one meeting I went to which I knew would not be briefed out to the media," she joked, to an eruption of laughter.

"What made those audiences so special was the understanding the Queen had of issues ... she knew many of the world leaders. In some cases, she had known their fathers."

"Yesterday was a day that we all knew would come some time, but in our hearts of hearts, we hoped never would," May said in the House of Commons.

"Queen Elizabeth II was quite simply the most remarkable person I have ever met," she added.