Read our full report on the Queen's procession from Balmoral Castle to Edinburgh here, and read here for the latest on the monarch's funeral plans.

Crowds gathered along the Royal Mile in Edinburgh, Scotland, to pay their respects on Sunday as the coffin of Queen Elizabeth II arrived at the Palace of Holyroodhouse.

It ended a six-hour journey from Balmoral Castle, with the procession traveling through villages and cities before arriving in Scotland's capital.

The Queen's coffin has arrived at the Palace of Holyroodhouse in the Scottish capital Edinburgh, completing the first leg of the monarch's eight-day final journey.

Britain’s longest-serving monarch died Thursday at the age of 96 at her Scottish country estate in Balmoral. Her funeral will be held in London on September 19.

Crowds of mourners lined the streets of villages and cities across Scotland, paying tribute to the monarch as her cortege made its way to Edinburgh in a six-hour journey. People in the Scottish capital had camped out in anticipation of the arrival of the Queen.

Upon arrival at the Palace of Holyroodhouse, the coffin was greeted with an honor guard made up of the Royal Regiment of Scotland who performed a royal salute.

The coffin was set to be transferred to the palace’s Throne Room, where household staff will be able to pay their final respects to the late monarch – similar to how the coffin was placed in the ballroom at Balmoral.

The coffin of Queen Elizabeth II arrived in the Scottish capital Edinburgh on Sunday afternoon, after a six-hour journey through the Scottish countryside.

Huge crowds gathered along the city's iconic Royal Mile to bid farewell to the Queen, who died on Thursday at the age of 96.

Earlier in the day, people told CNN's team on the ground that this was "a moment in history" and that the monarch was "very loved in Scotland."

The coffin will subsequently arrive at the forecourt of the Palace of Holyroodhouse, where it will be greeted with an honor guard made up of the Royal Regiment of Scotland who will perform a royal salute in the forecourt.

Mourners lined the streets as the coffin carrying Queen Elizabeth II passed through the cities of Aberdeen and Dundee -- two key stops along its six-hour journey to Edinburgh.

The coffin was driven along Aberdeen's North Deeside Road passing along the Great Western Road, before passing by Duthie Park, a 44-acre public park.

Members of the public, as well as former and current members of the armed forces, gathered in great numbers along the park's perimeter on the Great Southern Road for a special ceremony. 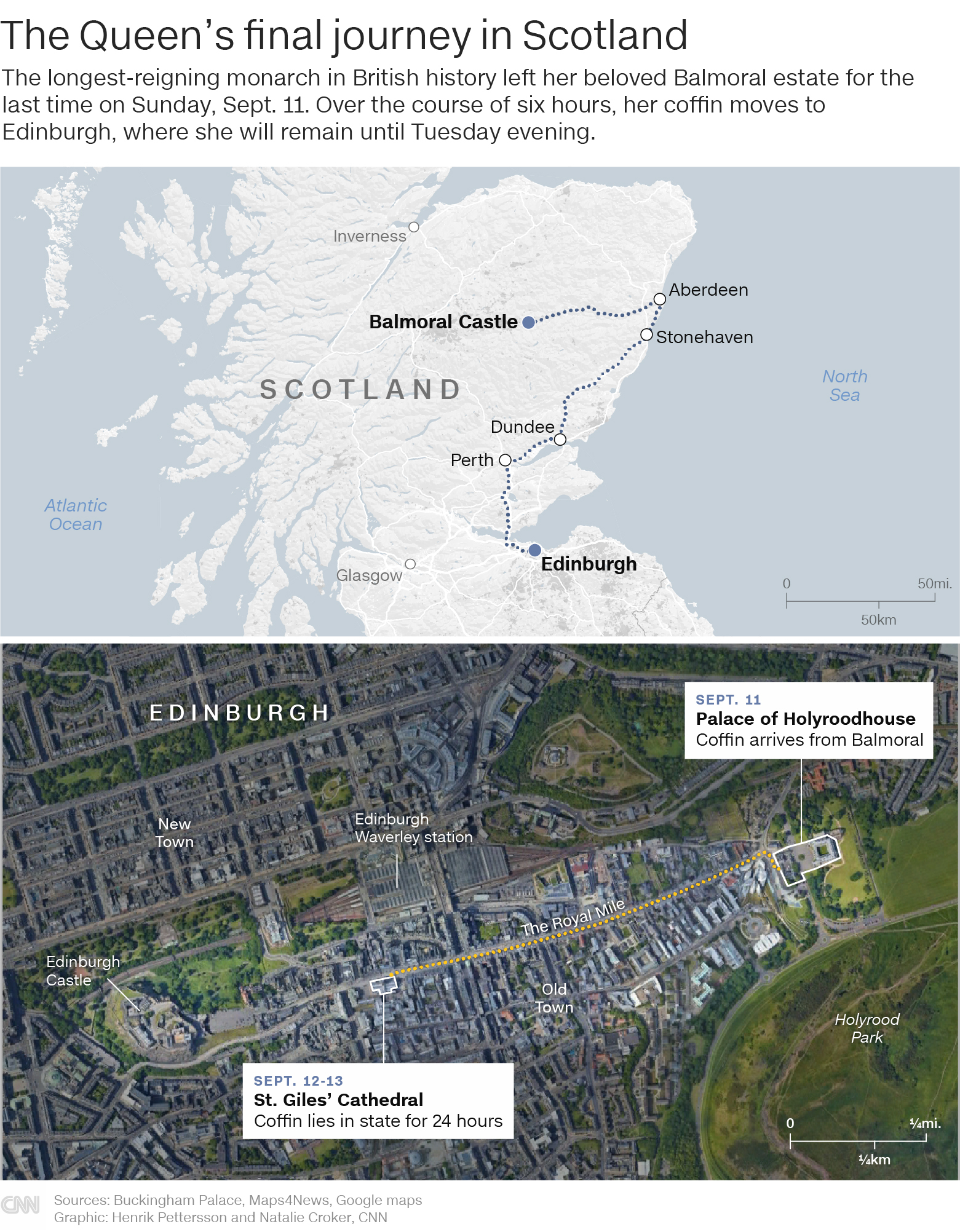 The Queen's corgis will live with the Duke and Duchess of York, Andrew and Sarah, a source close to the Duke of York told CNN on Sunday.

The pair, who divorced in 1996, both reside at the Royal Lodge on the Windsor estate.

The source told CNN that Sarah, Duchess of York bonded with the late Queen over a shared love of dog walking and horse riding.

Even after her divorce from Prince Andrew, Sarah continued her friendship with the Queen by walking dogs through the Windsor estate, the source added.

In addition to her two Pembroke Welsh corgis, Muick and Sandy, the Queen is reported to have left behind an older, mixed breed "dorgi" called Candy and a cocker spaniel named Lissy.

People in the Scottish capital of Edinburgh have been camping out in anticipation of the arrival of the coffin of Queen Elizabeth II.

The coffin left Balmoral Castle shortly after 10 a.m. (5 a.m. ET) on Sunday, before passing through several villages and the cities of Aberdeen and Dundee.

Later, it will make its way down the Royal Mile in Edinburgh before being taken to the Palace of Holyroodhouse, the official residence of the British monarch in Scotland.

People have been telling the CNN team on the ground that this is "a moment in history" and that Queen Elizabeth II was "very loved in Scotland."

Hilary Gemmell said she drove one and a half hours to Edinburgh with her mother as they wanted to come and pay their respects to the Queen.

"On Thursday night I definitely had a tear in my eye. I feel like we’ve lost one of the family," Gemmell said.

There are people camped out along the Royal Mile with chairs, holding spots for the next few hours so they can be there for the arrival coffin, according to the CNN team on the ground.

Prince William has spoken to the first minister of Wales and expressed his honor in being made Prince of Wales by King Charles III, according to a Kensington Palace statement on Sunday.

In a telephone conversation with Mark Drakeford, the Prince of Wales "acknowledged his and the Princess’s deep affection for Wales, having made their first family home in Anglesey including during the earliest months of Prince George’s life," the statement read.

The statement added that the new Prince and Princess of Wales will "serve the Welsh people" with "humility and great respect."

According to the statement, they will spend the months and years ahead deepening their relationship with communities across Wales.

"They want to do their part to support the aspirations of the Welsh people and to shine a spotlight on both the challenges and opportunities in front of them. The Prince and Princess look forward to celebrating Wales’ proud history and traditions as well as a future that is full of promise.

"They will seek to live up to the proud contribution that members of the Royal family have made in years past," the statement adds.

Antigua and Barbuda, a Commonwealth country and former colony of the British Empire, will hold a referendum on becoming a republic and removing King Charles III as the head of state within three years, its prime minister has said.

Antigua and Barbuda Prime Minister Gaston Browne told the UK’s ITV News on Saturday that "this is a matter that has to be taken to a referendum for the people to decide."

This was Browne’s first interview since the death of Queen Elizabeth II on Thursday.

Browne said "it does not represent any form of disrespect to the monarch. This is not an act of hostility, or any difference between Antigua and Barbuda and the monarchy."

He added that "it is a final step to complete the circle of independence to become a truly sovereign nation."

The Caribbean country is one of 14 states to retain a British monarch as head of state, with Browne signing a document confirming Charles’ status as the new King for now.

Some context: King Charles III will now become head of the Commonwealth, although that is not a hereditary position, after his succession to the role was agreed by Commonwealth leaders at a meeting in London in 2018.