The royal baby is a boy

Prince Harry spoke to the media at the same time the birth of his son was confirmed.

"I’m very excited to announce that Meghan and myself had a baby boy earlier this morning, a very healthy boy. Mother and baby are doing incredibly well. It’s been the most amazing experience I could ever have possibly imagined. How any woman does what they do is beyond comprehension, but we’re both absolutely thrilled and so grateful for all the love and support from everybody out there. It’s been amazing, so I just wanted to share this with everybody."

The Duke of Sussex also said that the royal couple were still considering names for their newborn.

The baby’s a little bit overdue so we’ve had a little bit of time to think about it, that’s the next bit. For us we’ll be seeing you guys in probably two days time as planned," Harry added.

Meghan, Duchess of Sussex, has delivered a baby boy.

While it has only just been confirmed that the Duchess of Sussex has gone into labor by Buckingham Palace, die-hard royal fans have been waiting patiently for the birth.

Toting baby-themed balloons and draped in Union flags, some fans have made their way to Windsor Castle, near to where Meghan and Harry now reside at Frogmore Cottage.

The Duke and Duchess of Sussex’s newborn will be seventh in line to the British throne.

Here's a recap of the line of succession: 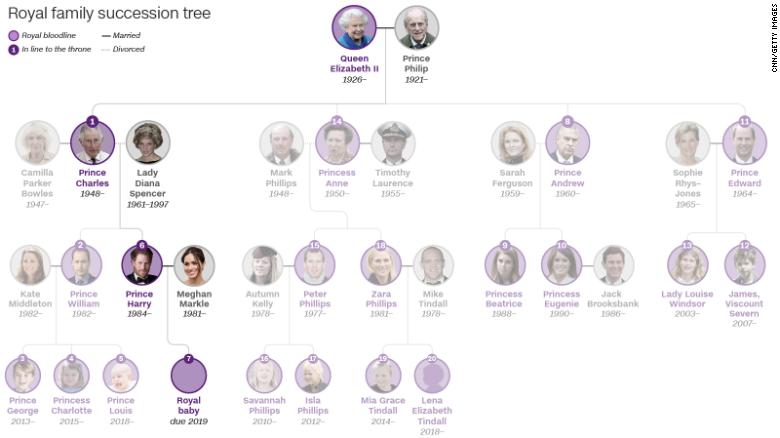 Buckingham Palace tells CNN that the Duchess of Sussex went into labor in the early hours on Monday morning.

Her husband, Prince Harry, was by her side.

Royal baby watchers have gone into overdrive with the news that Meghan, Duchess of Sussex, has gone into labor but one thing that remains unclear is where she will give birth.

Buckingham Palace told CNN's Max Foster that the Duchess is in labor but is not saying where she is.

Meghan, the Duchess of Sussex, has gone into labor, sources told CNN on Monday.

The baby will be seventh in line to the British throne behind Prince Charles, Prince William and his three children and Prince Harry. The new addition to the British royal family makes Queen Elizabeth II a great-grandmother for the seventh time.

Harry and Meghan married in a star-studded ceremony at Windsor Castle last May and announced they were expecting in October when they touched down in Australia for their first overseas tour as a married couple.

This post has been updated to correct an error in the photo caption.