The latest on Boris Johnson's resignation

Dominic Cummings, who served as Boris Johnson's most senior advisor before becoming an outspoken critic of the Prime Minister, said he doesn't believe Johnson has given up on his fight to stay in the office.

Writing on Twitter before Johnson delivered his statement but after the news he intended to resign broke, Cummings said: "I know that guy & I'm telling you he doesn't think it's over." He added that he believes Johnson thinks he can "play for time" and "get out of this."

Cummings was one of Johnson's closest aides since he became Prime Minister in 2019, and he wielded unprecedented power and influence inside Downing Street.

He was often credited as the architect of two of Johnson's greatest political triumphs: Brexit and his landslide election victory in 2019.

Cummings left Downing Street amid a bitter fallout in November 2020 and has since become a vocal critic of the Prime Minister — most notably of his handling of the coronavirus pandemic.

Commenting after Johnson's address, Cummings said the speech was "in character" for the Prime Minister.

"Blames everyone else. Thinks he's the real victim. Sets up betrayal story for future Tory conferences & Telegraph columns," he said on Twitter.

"We're all in for a nightmare if he's allowed to squat," he added.

Ukrainian President Volodymyr Zelensky called British Prime Minister Boris Johnson "a true friend of Ukraine," adding that he is confident that the UK’s policy toward Ukraine won’t be changing any time soon despite Johnson's resignation.

Ukraine gained a lot from their relationship with the prime minister, including first and foremost military support, Zelensky told CNN’s Wolf Blitzer in an interview on Thursday when asked about his comments on Johnson’s resignation.

In his resignation speech, Johnson addressed Britain's role in supporting Ukraine in its war and said the UK will fight for freedom as long as it takes.

"Let me say now, to the people of Ukraine, that I know that we in the UK will continue to back your fight for freedom for as long as it takes," Johnson said.

The Ukrainian president said he’s looking forward to speaking with Johnson directly to learn more about the details of his resignation.

The final lie that brought down the pyramid of untruths that sustained Boris Johnson's premiership was a particularly unedifying one.

His claim to be unaware of prior complaints about a member of his government accused of assault was swiftly exposed, leading to first a trickle, then a stampede of ministers from his tainted administration.

Johnson has now resigned -- like a fractious child unwilling to leave the party, he was previously reduced to begging for a few more months, weeks, days in office.

Why would a prime minister risk his leadership by appointing an alleged predator to a minor role in his government? Why lie about it when, inevitably, his folly was found out?

The answer is not that the miscreant Christopher Pincher was particularly close or important to Johnson; he wasn't. Instead, both the inability to abide by the norms which bind everyone else and the casual and foolish falsehood which followed speak to flaws in Johnson's makeup. Since childhood Johnson seems to have found it easier to reach for a preposterous lie than tell an obvious truth -- and has yet to meet a rule he didn't seek to break. 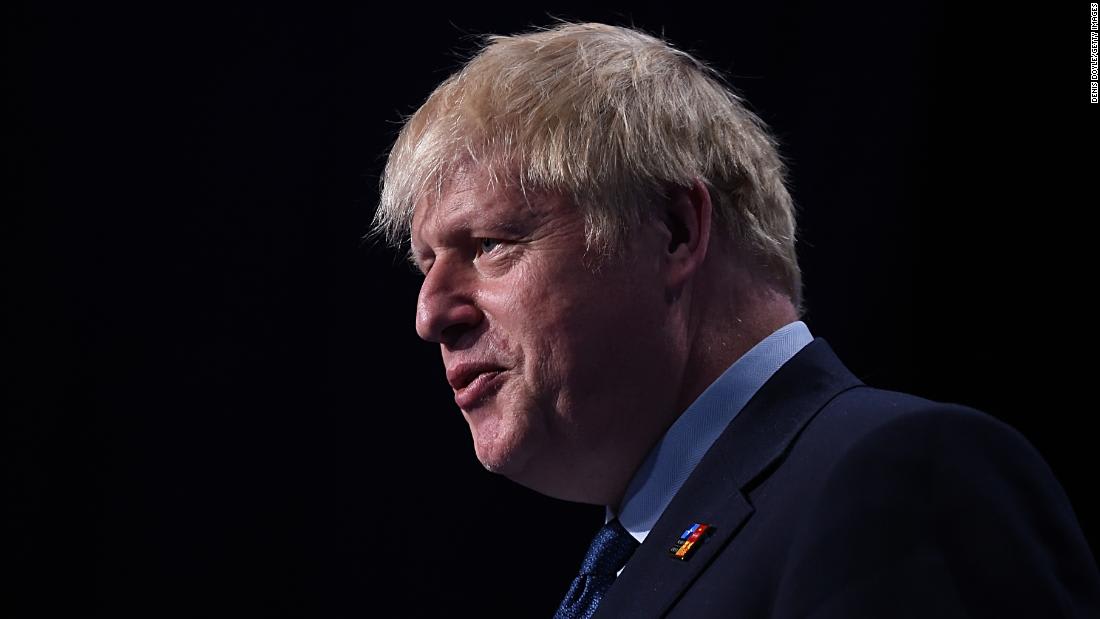 The leaders of UK's devolved administrations in Scotland, Wales and Northern Ireland have welcomed the announcement from British Prime Minister Boris Johnson that he intends to resign as Conservative Party leader on Thursday.

Scotland's First Minister Nicola Sturgeon said the resignation would bring "a widespread sense of relief that the chaos of the last few days (indeed months) will come to an end."

In a statement on her Twitter account, she said: "Boris Johnson was always manifestly unfit to be PM and the Tories should never have elected him leader or sustained him in office for as long as they have."

Sturgeon, who has announced last month that she intends to hold an independence referendum next year, questioned Johnson's plan to stay on as PM until autumn, saying it's "far from ideal, and surely not sustainable."

"All four nations need a stable UK Government and I am therefore pleased to see the Prime Minister has now done the right thing and agreed to resign," he said.

Michelle O'Neill, who leads Sinn Fein in Northern Ireland, said it was "absurd" that Johnson was allowed to stay in the office for so long.

"It has been an utter absurdity that the people here have been subjected to Boris Johnson for any length of time. He is a figure of absolute disrepute. Anyone who tries to sabotage our peace agreements, a quarter century of progress and our shared future is truly no friend of ours," she said. Sinn Fein is the largest group in Stormont, Northern Ireland's devolved parliament.

A number of Conservative lawmakers have praised Boris Johnson for his decision to step down. Here are some of those who made public comments so far:

UK Prime Minister Boris Johnson blamed the "herd instinct" of his colleagues for why he had to resign as Conservative Party leader during a defiant speech some criticized as lacking humility.

Here are some of the other key lines from the speech:

Johnson acknowledges the will of the Conservative Party, saying the timetable for departure to come soon

"It is clearly now the will of the Parliamentary Conservative Party that there should be a new leader of that party and therefore a new prime minister, and I've agreed with Sir Graham Brady, the chairman of our backbench MPs, that the process of choosing that new leader should begin now, and the timetable will be announced next week.

"And I have today appointed a cabinet to serve -- as I will -- until a new leader is in place."

"And the reason I have fought so hard in the last few days to continue to deliver that mandate in person was not just because I wanted to do so, but because I felt it was my job, my duty, my obligation to you to continue to do what we promised in 2019."

The UK will continue to support the plight of Ukrainians

"And let me say now, to the people of Ukraine, that I know that we in the UK will continue to back your fight for freedom for as long as it takes."

"And in the last few days, I've tried to persuade my colleagues that it would be eccentric to change governments when we're delivering so much, when we have such a vast mandate and when we're actually only a handful of points behind in the polls -- even in midterm after quite a few months and pretty relentless sledging -- and when the economic scene is so difficult domestically and internationally."

He blames his defenestration on the "herd instinct" of his colleagues

"But as we've seen in Westminster, the herd instinct is powerful when the herd moves, it moves."

"And my friends in politics, no one is remotely indispensable, and our brilliant and Darwinian system will produce another leader, equally committed to taking this country forward through tough times. Not just helping families to get through it, but changing and improving the way we do things -- cutting burdens on businesses and families and yes, cutting taxes, because that is the way to generate the growth and the income we need to pay for great public services."

While sad to go, Johnson will support whoever becomes the new leader

"And to that new leader, I say wherever he or she may be, I say I will give you as much support as I can. And to you, the British public -- I know that there will be many people who are relieved and perhaps quite a few will also be disappointed. And I want you to know how sad I am to be giving up the best job in the world. But them's the breaks."

Boris Johnson’s resignation speech told a story of how one of the UK’s most controversial leaders would like his time in Downing Street to be remembered. It is not how everyone in the country will recall his nearly three years as Prime Minister.

He spoke of his achievements, starting with getting Brexit done and “settling our relations with the continent for over half a century.” The UK is currently engaged in an almighty spat with the European Union over the very Brexit deal that Johnson signed in 2019, which is threatening to tear Northern Ireland from the rest of the United Kingdom.

He celebrated the UK’s response to the Covid-19 pandemic, which to date has killed over 180,000 Brits. He spoke of his flagship "levelling-up" agenda, a series of policies which have been widely derided as vague and non-existent.

And he spent a large part of the speech defending his own actions over the past few days, where in the face of derision from across the political divide Johnson clung to power, even though it was becoming clearer by the minute that not resigning was creating instability and chaos.

Johnson said that he did everything to stay in office because “it would be eccentric to change governments, when we're delivering so much when we have such a vast mandate and when we're actually only a handful of points behind in the polls.”

In reality, Johnson’s leadership has been in crisis since the start of the year and his protests that he should stay in power despite the numerous scandals and crises looked to many like craven attempts to hang on, no matter what was happening around him.

Attention now turns to a new leader, who will have to inherit a mess, both in terms of the Conservative party and the country. For all Johnson’s desire to remembered as a great Prime Minister, for many, that mess will be his legacy.

However, by the end, Johnson, unlike Donald Trump, did appreciate that his time was up. He wanted to hang on, but he admitted, “Them’s the breaks… no one is indispensable.”

For all the fears of a constitutional crisis, in the end, he did admit he'd run out of road.

Protesters have descended on the heart of the British government in recent days, demanding that Johnson quit.