The latest on Boris Johnson's resignation

A Downing Street spokesperson told CNN on Thursday that "the Prime Minister will make a statement to the country today.”

Earlier on Thursday, the British national broadcaster BBC reported that Boris Johnson is to resign as Conservative Party leader today.

PA Media earlier reported, citing a Downing Street source, that Johnson has spoken to Conservative Party 1922 Committee chairman Graham Brady and agreed to stand down, with a new leader set to be in place by the party conference in October.

Boris Johnson is to resign as Conservative Party leader, the BBC has reported.

The newly-appointed Chancellor of the Exchequer Nadhim Zahawi urged Boris Johnson to resign on Thursday, saying in a letter posted on social media that at Downing Street on Wednesday night, he made it clear that he thought the Prime Minister should leave.

“Prime Minister, you know in your heart what the right thing to do is, and go now," Zahawi said in the letter on Thursday.

“Yesterday, I made clear to the Prime Minister alongside my colleagues in No10 that there was only one direction where this was going, and that he should leave with dignity. Out of respect, and in the hopes that he would listen to an old friend of 30 years, I kept this counsel private," Zahawi said.

“I am heartbroken that he hasn’t listened and that he is now undermining the incredible achievements of this government at this late hour.”

Zahawi was appointed on Tuesday evening, following the resignation of Rishi Sunak.

Michelle Donelan, who was only appointed as education secretary on Tuesday, has resigned from the post.

In her resignation letter to Boris Johnson, shared on Twitter Thursday, Donelan said she could "see no way that you can continue in post, but without a formal mechanism to remove you it seems that the only way that this is only possible is for those of us who remain in cabinet to force your hand."

After Sajid Javid resigned from the role of education secretary on Tuesday, Johnson gave Donelan the position in a cabinet reshuffle.

UK Prime Minister Boris Johnson is under increasing pressure from his own Conservative party to resign. Under the UK political system, between elections, only Conservative members of Parliament have the power to remove a sitting Conservative prime minister.

Here's how things could play out in the next hours or days:

If Boris Johnson refuses to quit, can he be pushed out by a vote of no confidence from Conservative party lawmakers?

As party rules stand right now, no. He survived a confidence vote on June 6, which should mean he cannot face another confidence vote for a year. But lawmakers who want to get rid of him have raised the possibility of changing the rules.

Even if they don’t go through the formal process of voting no confidence in Johnson, he may be doomed. Former UK Prime Minister Theresa May survived a confidence vote against her leadership in December 2018 -- by a bigger margin than Johnson got in June --and was still out of office by the following summer.

Does a Johnson resignation trigger a general election?

No. It starts the Conservative Party process for choosing a new leader of the party. UK Prime Ministers are not directly elected by the people; Johnson is prime minister because he is the head of the largest party in the House of Commons. The Conservatives will still be the largest party even if Johnson quits or is dumped, so the new head of the party will become prime minister.

How is the new Conservative Party leader chosen?

Who is prime minister while all this happens?

Boris Johnson. He’ll remain in office as caretaker prime minister until his replacement is chosen.

Then he submits his resignation to the Queen, in person. The Palace will announce officially that Queen Elizabeth II has accepted Johnson’s resignation, and will say who she has invited to become prime minister to replace him. (This is a formality; she will choose the leader of the Conservative Party.)

Does the new prime minister have to call a general election?

No. The United Kingdom isn’t scheduled to have another general election until December 2024. The new prime minister could choose to ask Parliament to vote for an early election, but isn’t required to do so.

Boris Johnson was rocked by more resignations on Thursday morning as a growing number of ruling Conservative Party lawmakers attempt to force the UK Prime Minister out of 10 Downing Street.

Here are the latest resignations:

Brandon Lewis: UK’s Northern Ireland Secretary became the fourth cabinet member to leave their post. In Brandon Lewis's letter to the Prime Minister, he said a “decent and responsible government relies on honesty, integrity, and mutual respect -- it is a matter of profound personal regret that I must leave government as I no longer believe those values are being upheld.”

Helen Whately: In her resignation letter, UK’s Exchequer Secretary to the Treasury said she had argued for Johnson to continue in recent months, but “there are only so many times you can apologize and move on.”

Damian Hinds: UK’s Security Minister Damian Hinds announced on Thursday that he has resigned from his role in Johnson's government. “It shouldn’t take the resignation of dozens of colleagues, but for our country, and trust in our democracy, we must have a change of leadership,” he tweeted, attaching his resignation letter in the post.

George Freeman: He resigned from his post as UK’s Minister for Science, Research and Innovation, according to UK’s national press agency, PA Media, on Thursday.

In his resignation letter to Johnson, he said “the chaos in your Cabinet & No10 this month is destroying our credibility.”

Guy Opperman: The British junior minister who served as the Parliamentary Under-Secretary of State at the Department for Work and Pensions, resigned on Thursday. “I have given you ample opportunity to show real change,” Opperman said in his resignation letter addressed to Johnson. “Sadly, recent events have shown clearly that government simply cannot function with you in charge.”

Chris Philp: He resigned from his role as UK’s Minister for Tech and the Digital Economy, saying: “given events over the past few weeks and months I, therefore, think that you should resign as Prime Minister and it follows that I cannot serve in your Government any longer.”

James Cartlidge: The junior minister, who served as Parliamentary Under-Secretary of State for the Ministry of Justice, became the 53rd member of the government to resign.

“I felt duty-bound to remain in the post given the very challenging circumstances facing the criminal courts. I took the view there had to be some semblance of government in this crucial arm of our constitutions. But the position is clearly untenable,” he said in his resignation letter shared Thursday.

Boris Johnson's scandal-ravaged premiership was dangling by a thread on Thursday as he battled efforts to force him from office even as a growing number of government ministers urged the beleaguered British Prime Minister to resign.

The United Kingdom woke on Thursday morning to more than 50 members of government leaving their posts, including several cabinet ministers.

The previous day, Johnson began by vowing to fight on, despite the shock resignations of his finance minister, health secretary and dozens of other lawmakers furious about the latest saga to engulf Downing Street: the botched handling of a resignation by Johnson's former deputy chief whip, Chris Pincher, who was accused of groping two men last week.

Johnson endured a battering at Prime Minister's Questions and a bruising appearance before a parliamentary committee of senior lawmakers in Parliament, before a delegation of cabinet members arrived at Downing Street to ask Johnson to resign.

But Johnson refused to go down without a fight. On Wednesday night, he sacked close ally and senior cabinet minister Michael Gove, who sources told CNN had urged Johnson earlier in the day to accept that his time was up.

Another key ally, Home Secretary Priti Patel, told Johnson that the general view of the Conservative party was that he had to go, a source close to Patel told CNN.

As the news of Gove's firing emerged, a spokesman for Johnson insisted that the Prime Minister was in "really good spirits." 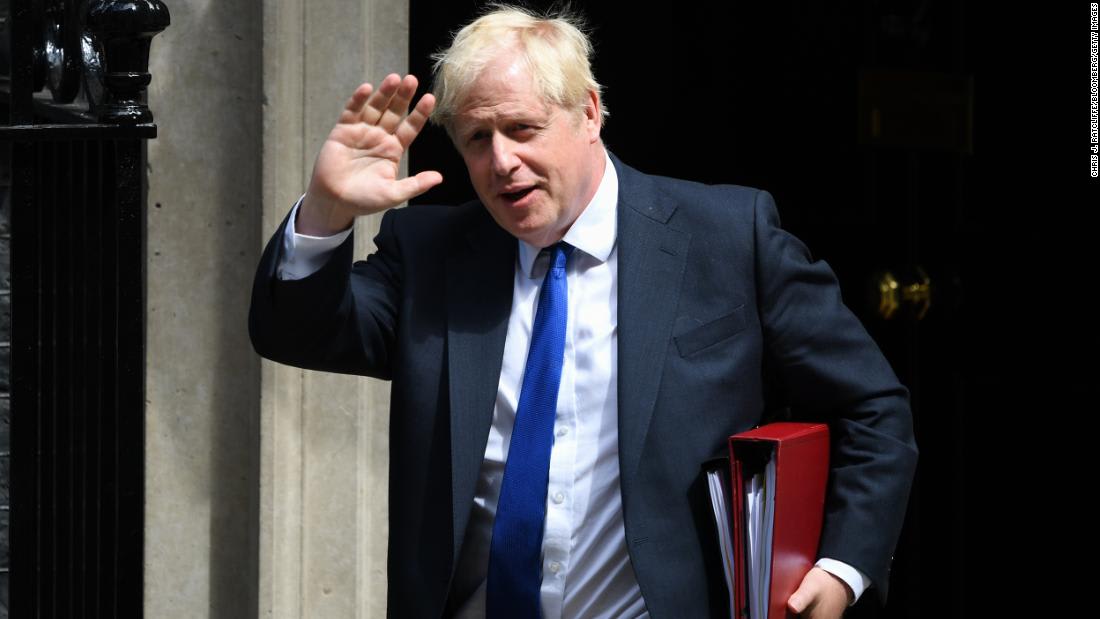