8 killed in shootings at Atlanta-area spas

Our live coverage had ended for the day.

At least eight people were found dead at three different spas in the Atlanta area Tuesday.

Police say video evidence led them to believe one suspect, Robert Aaron Long, was responsible for all three shootings. He was arrested Tuesday night about 150 miles south of Atlanta.

About the shootings: The first shooting happened shortly before 5 p.m. Tuesday at Young's Asian Massage near Woodstock, Georgia, about 30 miles northwest of downtown Atlanta. That shooting left four dead. One person was also wounded, Cherokee County Sheriff's Office said. About an hour later, three people were found dead at the Gold Massage Spa on Piedmont Road in Atlanta, Police Chief Rodney Bryant said. One person was also found dead at the Aroma Therapy Spa, directly across the street.

The victims: Of those who died, six were Asian and two were White, Cherokee County sheriff's officials said in a joint news conference with Atlanta police on Wednesday. All six Asian victims were women, the Atlanta Journal-Constitution reported earlier, citing authorities.

The four killed in the shooting near Woodstock were Delaina Ashley Yaun, 33, of Acworth; Paul Andre Michels, 54, of Atlanta; Xiaojie Tan, 49, of Kennesaw; and Daoyou Feng, 44.

Police didn't immediately release the names of the four people killed at the two Atlanta spas. Four of those killed were of Korean ethnicity, according to South Korea's foreign ministry, which said it was in contact with its consulate in Atlanta.

Investigators tracked Long's phone, and Reynolds reached out to authorities in Crisp County, well to the south, to let them know he appeared to be heading in that direction, Reynolds said. Long's vehicle was spotted, a chase ensued on Interstate 75 in Crisp County, and a state trooper performed a maneuver that sent the SUV out of control, authorities said. Police arrested Long and confiscated a 9 mm gun from his vehicle, Cherokee County authorities said.

The suspect's intentions: Preliminary information indicates the shootings could relate to the suspect's claim of a potential sex addiction, Cherokee County authorities said Wednesday. Long told investigators he saw the spas as a temptation that he wanted to eliminate, they said. Still, it was too early to know a motive, Atlanta Police Chief Rodney Bryant said at a joint news conference with Cherokee County sheriff's officials.

Community on edge: Because of the victims' backgrounds, some public officials had raised fears before Wednesday's police news conference that ethnicity had come into play, amid rising concerns nationwide about anti-Asian violence during the coronavirus pandemic.

Atlanta Mayor Keisha Lance Bottoms, acknowledging most of the victims were Asian, said Wednesday that "we know (violence against Asian Americans) is an issue that's happening around the country; it is unacceptable, it is hateful, and it has to stop."

During the interview on the "Situation Room," Blitzer asked the mayor whether these killings should be prosecuted as hate crimes, noting Georgia’s hate crime law does include victims targeted based on sex.

“I think whatever the stiffest most appropriate charges there are, this guy should face those charges,” said Bottoms. “In Georgia, you can be charged with a hate crime. It covers a variety of areas and I personally think it would be appropriate, but I will defer to the prosecutors to make that determination.”

Bottoms said the city is grateful to law enforcement that the suspected shooter, Robert Aaron Long, 21, of Woodstock, Georgia, was apprehended quickly and the violence was not carried out to other states. Although the suspect claims the shootings were not racially motivated, Bottoms said it’s difficult to ignore that Asian community has been targeted.

Bottoms said it is important that people stand in solidarity with the Asian American community at this time. “They are being targeted unfairly and in Atlanta, what we've seen the worst has happened,” she said.

The suspect in the spa shootings where eight were killed in metro-Atlanta purchased his gun legally at a local gun store, Big Woods Goods in Holly Springs, Georgia, an attorney for the company confirmed to CNN.

In a brief statement to CNN, Matt Kilgo said the company is fully cooperating with law enforcement and there is no indication that there was anything improper with the transfer yesterday.

Eight people died and one person was injured in the shootings on Tuesday.

These are in addition to earlier charges from the Cherokee County Sheriff's Office that include “four counts of Murder and one count of Aggravated Assault and has no bond,” the CCSO said in a Wednesday statement.

In total, Long faces eight counts of murder and one count of aggravated assault for the incidents.

He is currently detained at the Cherokee County Adult Detention Center and it is anticipated that he will face a judge tomorrow.

Police have not yet offered a motive in the shootings saying it's too early in the investigation to determine if they were a hate crime.

White House press secretary Jen Psaki said the President made the request “so that we can hear from the community and determine how that should impact policies moving forward.”

Psaki pointed to the memorandum Biden signed in January to combat racism against Asian Americans in the United States.

“He did sign an executive order, and actually there are ongoing processes, including from the Department of Justice, where they're doing listening sessions now, HHS will start those soon,” Psaki said at a briefing Wednesday.

“There's also an ongoing review of domestic violent extremism that is wide-ranging, that is a 100 day review that will take a look at a range of issues and that will also be a longer-term, strategic, comprehensive look at how that impacts our society and this will certainly be a part of that,” Psaki added.

Investigators believe the gunman accused of shooting and killing several people at three different spas in the Atlanta area Tuesday purchased the weapon he used in the attack this week, law enforcement sources tell CNN.

One of the sources said nothing in suspect Robert Aaron Long’s background would have prevented the purchase.

Long is accused of shooting and killing several people at three different spas in the Atlanta area Tuesday, according to authorities.

During a Wednesday news conference, Sheriff Frank Reynolds, Cherokee County Sheriff's Office said Long “made indicators that he has some issues, potentially, sexual addiction, and may have frequented some of these places in the past.”

Reynolds told reporters that the family of Long turned him in to authorities on Tuesday.

A law enforcement source said the suspect was recently kicked out of the house by his family due to his sexual addiction, which, the source said, included frequently spending hours on end watching pornography online.

According to an incident report from CCSO, a 911 caller said the suspect could possibly be his son and “does have a tracker on his phone.” Another anonymous caller to 911 told dispatch the suspect was “kicked out of his parents' house last night,” adding that he “was emotional,” the incident report says.

Long, 21, has been charged with, “four counts of Murder and one count of Aggravated Assault and has no bond,” the CCSO said in a Wednesday statement. He is currently detained at the Cherokee County Adult Detention Center. He could face separate charges for the shootings he’s suspected of committing in Atlanta, but authorities there have not charged him yet.

According to two law enforcement sources involved in the investigation, Long attempted to justify his actions when he told police he thought about killing himself, but decided instead to "help" others with sexual addictions by targeting spas.

One of the sources tells CNN, the suspect is on suicide watch and was wearing a vest intended to protect him from self-harm in the mug shot.

FBI agents from the bureau's Atlanta field office civil rights team continue to investigate whether race was a factor in the murders, one of the sources said. 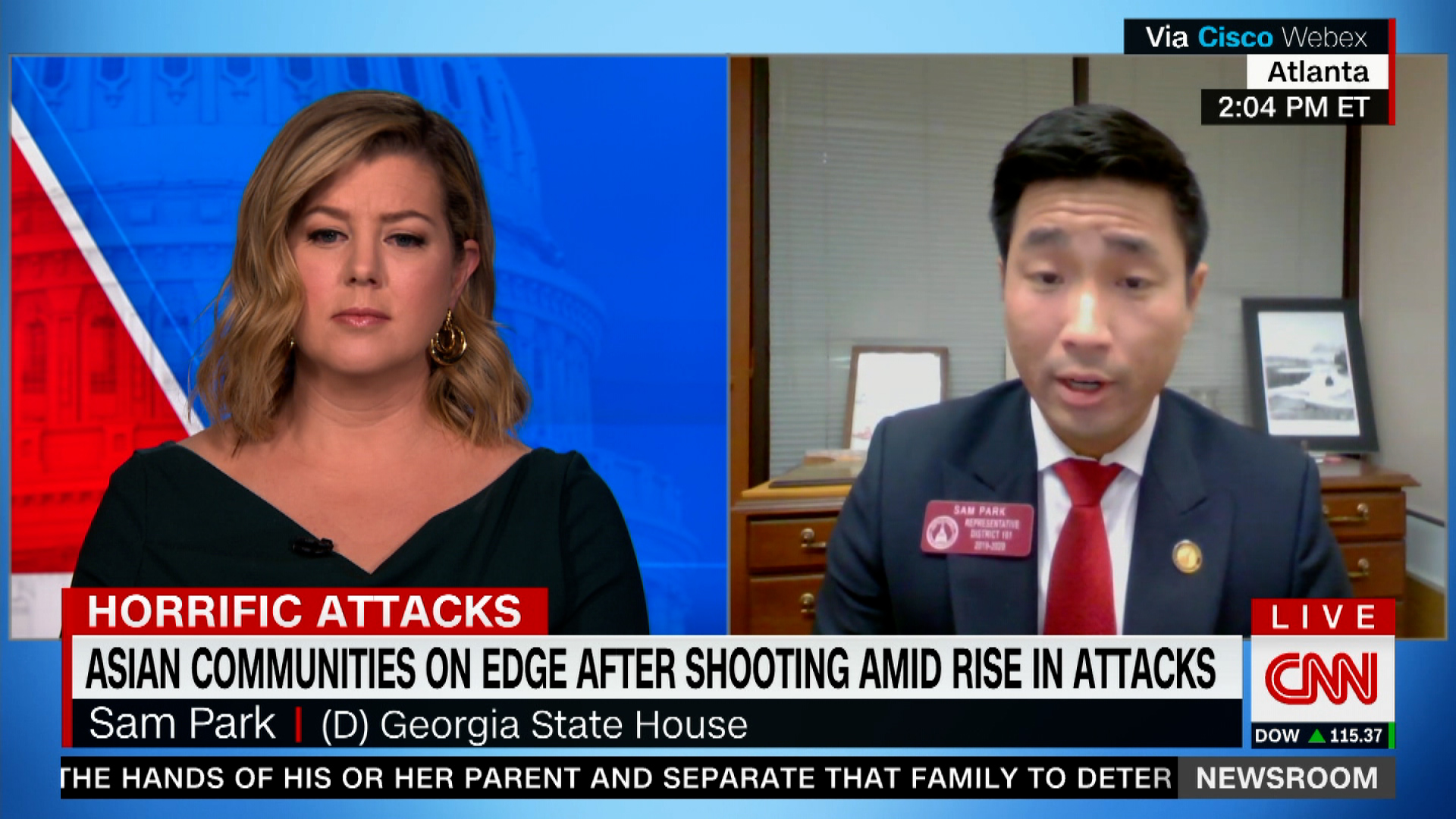 After eight people — six of whom were Asian women — were killed in shootings at Atlanta-area spas, Georgia State Rep. Sam Park said it serves as a reminder to “protect the most vulnerable among us.”

“There's been a lot of concern with the Asian American community, particularly given the surge in violence and discrimination we’ve seen over this past year, a lot of it being driven by racist political rhetoric. … Regardless of the motivation, given the concerns the community already has, in light of all the attacks we have seen — particularly against Asian American women and the elderly — I think it’s a reminder in which we need to do everything we possibly can to protect the most vulnerable among us,” Park told CNN's Brianna Keilar.

Police have not yet offered a motive in the shootings saying it's too early in the investigation to determine if they were a hate crime.

Park recommended that people contact their local leaders if they feel unsafe or threatened.

“Make your voice heard. Reach out to your community members, reach out to elected officials, law enforcement. And raise those concerns so that we can do as much as we can to provide support,” he said.

“I want to start by saying something directly to the families of the shooting victims in Atlanta last night,” Biden said Wednesday. “My heart is with you. And I hope that all Americans will join me in praying for everyone touched by this senseless tragedy.”

Local police have yet to definitively offer a motive in the Tuesday spree, but because of many of the victims' backgrounds, some public officials and organizations have raised concerns that ethnicity came into play.

It comes following an alarming spike in violence directed at the Asian American community in recent months. 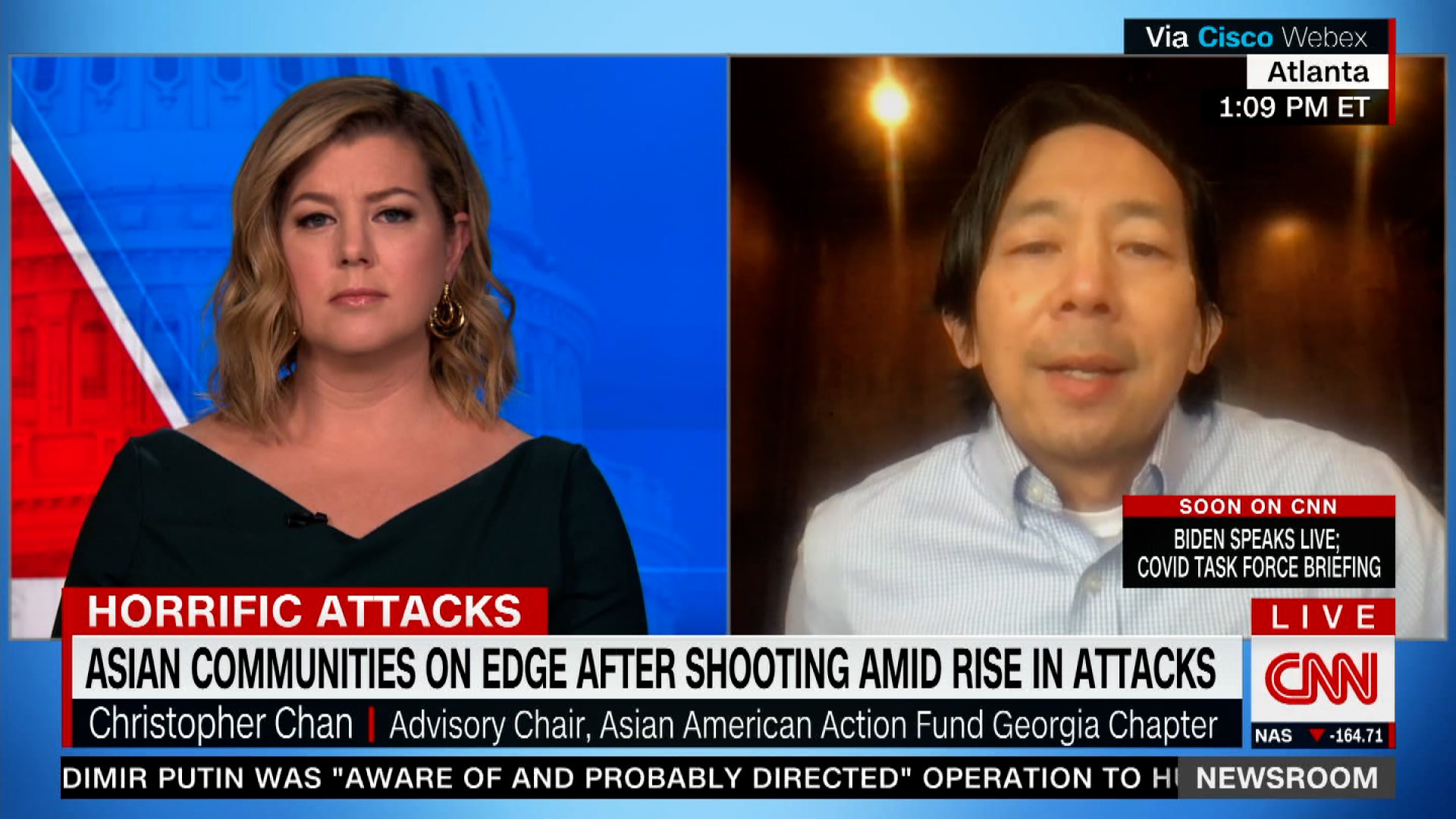 Attorney Christopher Chan, advisory chair of the Asian American Action Fund Georgia Chapter, said the Atlanta shootings is of high concern “because it's such a high-profile event that has occurred against our community.”

He added, “It would also set into place some Department of Justice procedures as well as coordination among state and local law enforcement as to the language being used to describe Covid-19, particularly getting rid of and correcting descriptions as to how Covid-19 is being described in the news and media."

Police have yet to report a motive in the attack.