President Trump said he just held a meeting with several families of black Americans who have been killed by police.

Relatives of Ahmaud Arbery, who was fatally shot  in a neighborhood outside Brunswick, Georgia, were also at the White House, Trump said.

"All Americans mourn by your side, your loved ones will not have died in vain," Trump said in the Rose Garden at a ceremony where he's expected to sign a modest police reform executive order. 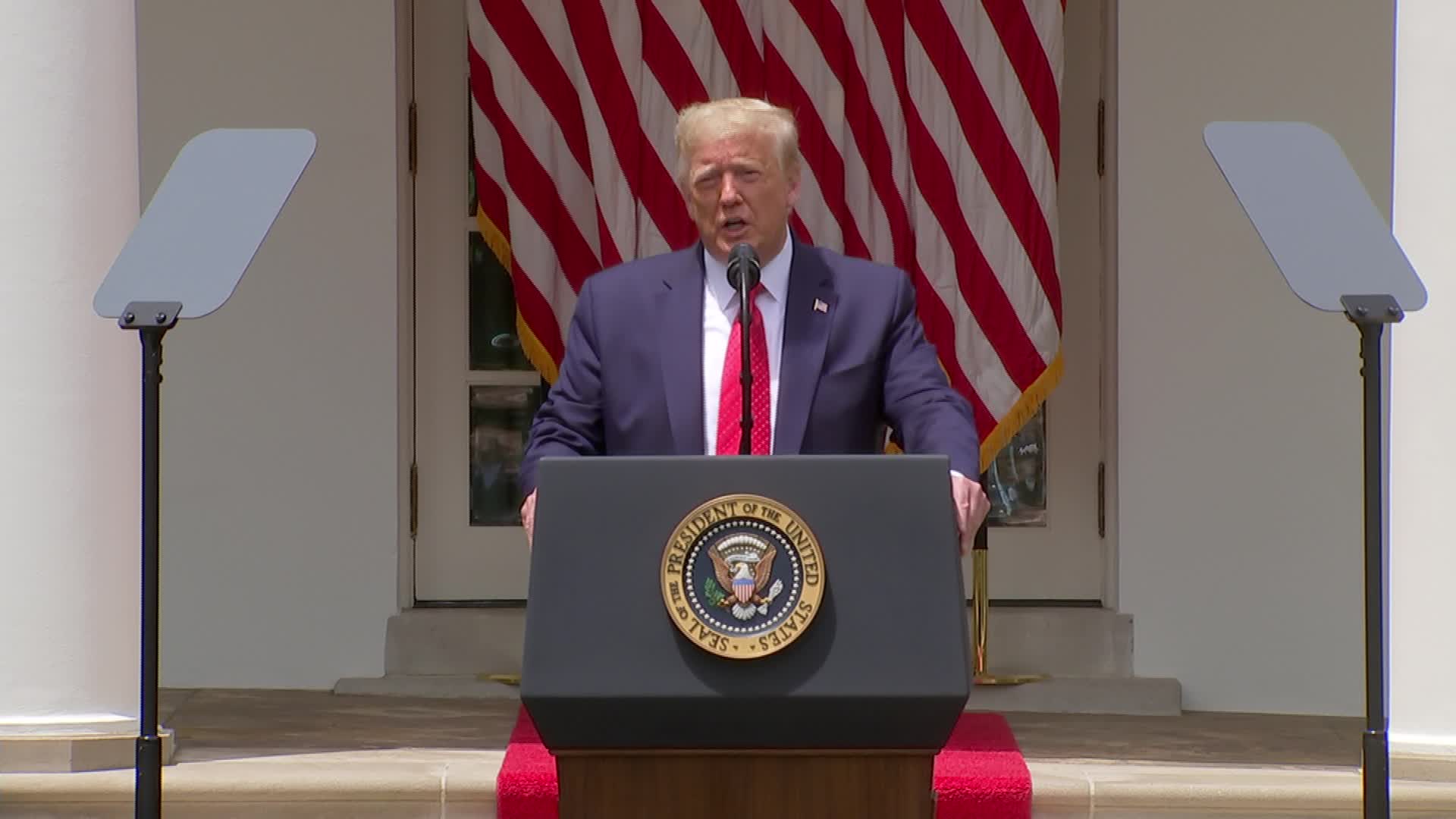 President Trump said he will be signing an executive order that encourages "police departments nationwide to adopt the highest professional standards to serve their communities."

"These standards will be as high and as strong as there is on Earth," Trump said. "The vast majority of police officers are self-less and courageous public servants and they are great men and women."

The President then went on to defend police officers.

"Nobody needs a strong trustworthy police force more than those who live in distressed areas and no one is more opposed to the small number of bad police officers — and you have them — they are very tiny. I use the word tiny. It's a very small percentage, but you have them. But nobody wants to get rid of them more than the overwhelming number of really good and great police officers," Trump said.

President Trump is about to sign an executive order on police reform in the White House's Rose Garden.

The following individuals were expected to attend, according to the White House: 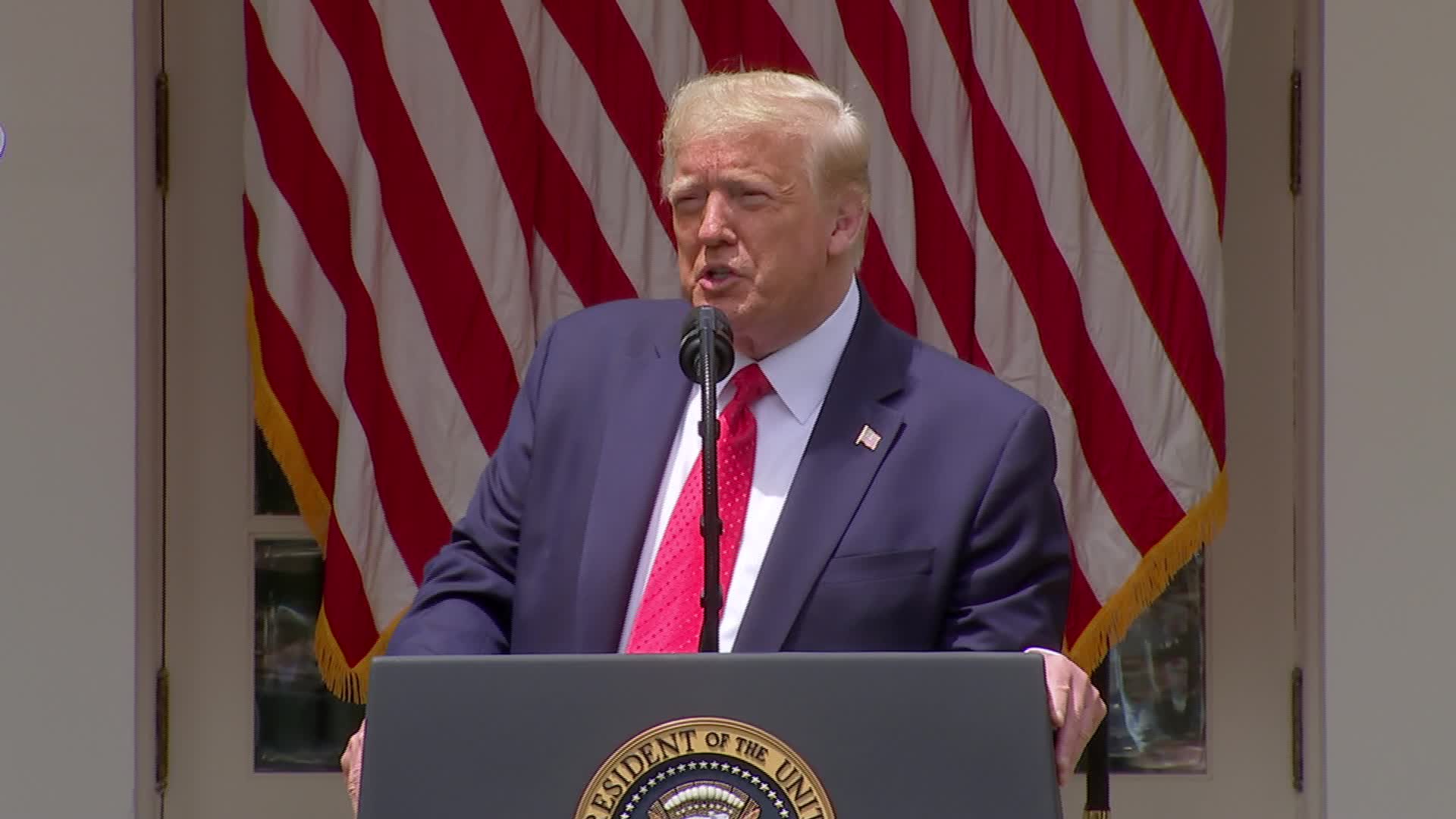 President Trump said that he "strongly" opposes efforts to defund or dismantle police departments during his Rose Garden announcement of a new executive order on policing.

He called those efforts "radical."

"Americans know the truth. Without police, there is chaos. Without law, there is anarchy and without safety, there is catastrophe."

The executive order is expected to establish a national certification system for law enforcement agencies and a database to better track excessive uses of force by police officers nationwide, a source familiar with the matter told CNN.

The key provisions in a current draft of the executive order included modest directives with broad-based support intended to encourage higher standards among police departments while leaving the prospect of more significant police reform to Congress.

A source briefed on the text of the order said it is relatively muted when it comes to sweeping police reforms that have been discussed by members of both parties recently. The order mainly leans on lawmakers to do the heavy lifting, as the President has privately expressed caution about alienating police officers by going too far.

Remember: Trump has yet to comprehensively address issues of police reform or even acknowledge systemic racism in America and has not been heavily involved in drafting the executive order. Instead, the President has directed his energy on delivering a tough-talking law-and-order message and falsely portraying peaceful protesters as mostly violent.

Meanwhile, on Capitol Hill: Democrats and Republicans on Capitol Hill are working to advance two competing bills, with the Democratic legislation going further in several respects by banning chokeholds and no-knock warrants. White House officials have been coordinating with South Carolina Sen. Tim Scott, the sole black Republican senator, who is spearheading the GOP's legislative effort.

Breonna Taylor family attorney Sam Aguiar released a strongly worded statement Tuesday morning saying that all of Taylor’s family has been asking from the Louisville Metro Police Department (LMPD) is for them to “Tell Us the Truth.”

Taylor was killed in March after officers forced their way inside her home and exchanged shots with her boyfriend, according to a lawsuit filed by her mother. The officers were executing a search warrant in a narcotics investigation, the Louisville Metro Police Department has said, when they entered Taylor's apartment just before 1 a.m. on March 13.

"For months, we have pursued the truth surrounding what took place leading up to, during and following the murder of Breonna Taylor. And for months, LMPD and Mayor Fischer have covered it up," the statement says.

Aguiar accuses the mayor’s office of providing all requested information regarding Taylor’s death investigation to counsel for the city and withheld it from Taylor’s family legal representation.

Aguiar continues by calling these actions taken by mayor Greg Fischer’s office “above the law” and says they’ve gone on far too long in this administration, “contrary to the mayor’s office’s beliefs, the city is not exempt from the rules governing our justice system.”

The attorney says that Louisville ignored the Taylor’s family’s requests for an independent investigation and “only succumbed after national outrage and urging” by Gov. Andy Beshear.

“It's like speaking to the people who are the oppressed and asking them … to lead to the undoing of the oppression,” she said.

“What you have to do is not only speak to us. You have to speak to yourselves,” Burns told CNN’s Poppy Harlow. “You are the architects and you're the beneficiaries of a system today that you can undo.”

There are only four black CEOs of Fortune 500 companies, none of which are women.

Burns said that corporations in the United States have been left to monitor themselves to diversify, but they have continuously failed.

“How many more years do you say to the people who have been excluded ‘Just hold on?’” Burns said.

Senate Majority Leader Mitch McConnell is pushing for as broad of support as possible within the Senate GOP Conference for the emerging police overhaul bill that will be offered by Republican Sen. Tim Scott, two GOP sources tell CNN.

This comes after more than 220 House Democrats signed onto their police reform bill, a strong sign of Democratic support that ensures it will pass that chamber next week.

Scott said Monday evening that he's had talks with some Senate Democrats but said he's been told that Democratic leadership has urged their members not to sign onto his emerging measure.

Democrats are pushing back on this, arguing that there's no bill text yet to sign onto. Though Senate Minority Leader Chuck Schumer and other Democratic leaders have expressed skepticism to the drafts of the bill.

Vince Champion, southeast regional director of the International Brotherhood of Police Officers, said he believes the Fulton County District Attorney weighing charges for both officers involved in the fatal shooting of Rayshard Brooks at an Atlanta Wendy’s on Friday is a rush to judgement and politically expedient.

“For the DA to start acting as if he's going to charge without a complete investigation done by the [Georgia Bureau of Investigation] which they're in the process of doing, I think it's premature,” Champion told CNN. “I feel that he's just trying to cater to the rioters and I think he's doing it for his own political gain.”

Champion said that if Fulton County District Attorney Paul Howard does charge the officers, the union will provide their legal representation.

The district attorney has said he would announce charges against the officers on Wednesday, at the earliest.

Some background: Atlanta Police Department officer Garrett Rolfe has since been fired for his involvement in the shooting. Officer Devin Brosnan was placed on administrative duty. Champion also called the firing of Rolfe premature. “There was no investigation into what happened. His due process was violated," he said.

Brooks was shot twice in the back, according to a release by the Fulton County, Georgia, Medical Examiner's Office. Brooks died from organ damage and blood loss from the two gunshot wounds, according to the office.

The autopsy, performed on Sunday, lists Brooks' cause of death as gunshot wounds to the back. The manner of death is listed as homicide.

According to the Atlanta Police Department and the Atlanta Police Foundation, a total of eight officers have resigned since June 1. The foundation did not have an exact reason for the resignations, but indicated a low moral throughout the department.

Champion said that the Brooks incident and the charging of six Atlanta police officers in the tasing of two college students in May have had a negative impact.

“[The officers] don't know how to do their job now because if they do their job and they do what they're trained and they do and do what their policies and procedure say, it doesn't matter because if the mayor doesn't like the way it looks, she fires. If the District Attorney doesn't like the way it looks, he charges,” Champion says. “When it comes to the time that you have to act. The officers now are deciding whether they're going to or not. And the sad part about that is if those officers think a little longer than they should, we're going to start seeing a lot of police officers hurt and injured.”