The lanes are now reopened, according to the Washington State Department of Transportation.

The half-brother of Robert Fuller, the 24-year-old black man who was found hanging in the city of Palmdale last week, was killed in a deputy-involved shooting on Wednesday, Fuller’s family attorney Jamon Hicks confirmed.

“This afternoon I had to notify the sisters of Robert Fuller that their half-brother Terron Jammal Boone was killed by Los Angeles County sheriff’s deputies in Kern County,” Hicks said.

At approximately 4:39 p.m. local time on Wednesday, detectives from the Los Angeles County Sheriff's Department (LASD) responded to assist deputies with a deputy-involved shooting in Kern County’s Rosamond, LASD said in a statement.

A public information officer for the department was not able to provide details of the incident.

“At this time, until we receive all of the information, the family and their legal team doesn’t have any further comment on this incident. The family respectfully asks that their privacy be respected,” said Hicks.

CNN has reached out to the Kern County Sheriff’s Office for more details.

Those were the words of 27-year-old Rayshard Brooks who was shot and killed by an Atlanta police officer this month. Brooks spoke those words in February, just a few months before his death, during an interview he gave to a company called Reconnect, which focuses on fighting incarceration.

The company had posted an ad on Craigslist, looking for people to share their stories about navigating the criminal justice system, and Brooks answered the call.

CNN obtained the 40-minute interview with the help of CNN's Political Commentator Van Jones, who said a colleague in the criminal justice field entrusted it to him.

In the video, it's clear Brooks is searching for redemption and a better life.

He reflects on life behind bars and speaks openly about the struggles he faced after making the "mistake" that put him there.

"I just feel like some of the system could, you know, look at us as individuals. We do have lives, you know, was just a mistake we made, you know, and, you know, not, not just do us, as if we are animals. You know lock us away."

Brooks described being locked up 23 hours a day and told when to wake up and where to go. He said it "messed" with his mental state.

"Going through that process, it hardened me at a point, you know to like, hey, you know, I have to have my, my guard up because the world is cruel, you know, it took me through seeing different things and, you know, in the system you know it just, just makes you harden to a point," he recalled. 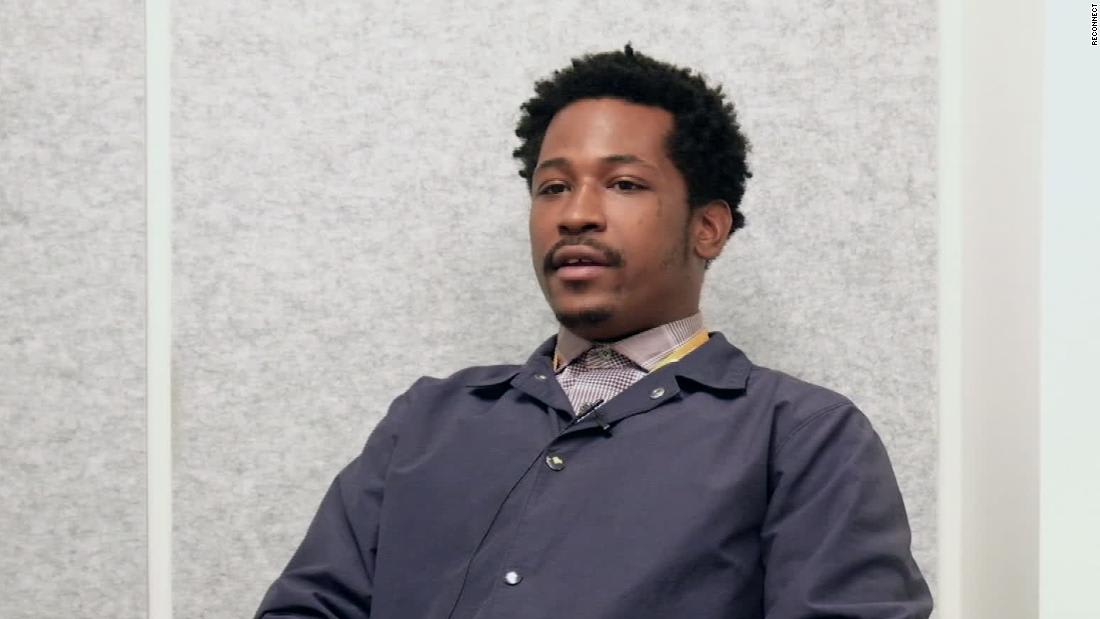 Hennepin County emailed the following statement, saying the one-minute error "made no difference in the decision to charge nor in the continuing legal hearings."

"These kinds of technical matters can be handled in future amendments to the criminal complaint if other reasons make it necessary to amend the complaint between now and any trials. The one minute error made no difference in the decision to charge nor in the continuing legal hearings."

Protesters are now dispersing after a standoff with police in front of Atlanta's Zone 3 police precinct.

CNN correspondent Ryan Young on the scene said a group of 75 protesters had gathered there.

He said that police gave a dispersal order to the crowd and several officers were on standby nearby.

Young said that the precinct is one where some officers have decided to call out.

"This is a very affluent neighborhood, but these folks have shown up in the neighborhood to have their voices heard," Young said.

Atlanta Mayor Keisha Lance Bottoms told CNN's Chris Cuomo that she doesn't know exactly how many officers are calling out, but that the city has enough police officers.

"We don't have a count yet because we were in the midst of a shift change but what I do know is that we do have enough officers to cover us through the night," she said.

"Our streets won't be any less safe because of the number of officers who called out. But it is just my hope again that our officers will remember the commitment that they made when they held up their hand and they were sworn in as police officers."

It comes as the Atlanta Police Department tweeted that it was experiencing "higher than usual number of call outs" this evening just hours after charges were brought against former officer Garrett Rolfe and officer Devin Brosnan in the case of Rayshard Brooks.

Bottoms said that some officers are staying on shift to make up the difference and the city could call on partners in other across the metropolitan area and in other jurisdictions if needed.

"We've already notified many of our other partners just in case we need to call others in. But we're fine," she said. "I think our true test will be likely tomorrow but I don't have any concerns about where we are this evening."

Bottoms said that morale is down in police departments across the country, "and I think ours is down tenfold."

"This has been a very tough few weeks in Atlanta," she said.

"There is no playbook for what we are dealing with right now across the country. So what I do know is that we have a lot of men and women who work for our police department who care about this city and they work each and every day with integrity and with honest interactions with our communities. And so those are the people who I expect will show up for work," Bottoms said.

The two officers at the center of the investigation into the death of Rayshard Brooks were charged Wednesday afternoon by Fulton County District Attorney Paul Howard.

A lot happened during Howard's news conference; here are the biggest developments:

Attorneys for Devin Brosnan, one of two Atlanta police officers charged in the death of Rayshard Brooks, says there is no agreement Brosnan will testify.

“To be clear, there is no agreement that our client will testify at any hearing,” Brosnan’s attorney Amanda Clark Palmer told CNN’s Chris Cuomo on Wednesday night.

When asked by Cuomo if Brosnan might take a deal to work as a state’s witness, Palmer denied this.

“In my view, he doesn’t need a deal; he shouldn’t have been charged with a crime in the first place,” Palmer said, “He’s not a state’s witness, he’s a witness. He will tell the truth about what he saw and what happened. And he will do so if he gets a subpoena.”

Brosnan is not accused of shooting Brooks but faces an aggravated assault charge for standing on Brooks after he was shot in the parking lot.

Don Samuel, Brosnan’s other attorney, claimed Brosnan had suffered a concussion and was confused and not aware that Brooks had been shot when he stood on his shoulder.

US President Donald Trump called the police shooting of Rayshard Brooks in Atlanta a "terrible situation," but added that "you can't resist a police officer," in his most extensive comments about the shooting that led to murder charges for one police officer.

"The events that took place yesterday was, I thought it was a terrible situation, but you can't resist a police officer and if you have a disagreement, you have to take it up after the fact it was a very sad, very very sad thing," Trump told Fox News late Wednesday night. "And look, you really -- you really do take a look it was out of control the whole situation was out of control."

Trump continued: "You know, I don't know that I wouldn't necessarily believe that, but I will tell you that's, that's a very interesting thing and maybe that's so. They're going to have to find out."

"I hope he gets a fair shake because police have not been treated fairly in our country," the President added.