The Covid-19 pandemic in the US

Over the weekend, US Rep. Collins called on the Georgia attorney general to appoint an independent prosecutor in the Brooks case, claiming that charges brought against two police officers in connection with the fatal shooting of Brooks outside an Atlanta Wendy's are political.

"I think you're also aware that his opponents have spent a lot of time talking about his weak law and order record," Howard said.
"I guess what Congressman Collins believes is by coming to Atlanta and attacking me and showing his support for the Atlanta police union, I think he believes it wipes out his record as a criminal defense attorney representing child molesters and defendants involved with domestic violence cases.
"I think his remarks ... were clearly political because as you know, Congressman Collins is running for the US Senate."

The case of the fatal shooting of 27-year-old Rayshard Brooks in Atlanta has "very little to do with a Taser," Fulton County District Attorney Paul Howard told CNN's Chris Cuomo on Tuesday night.

Brooks was shot dead by police outside a Wendy's restaurant earlier this month after failing a sobriety test. Officers tried to handcuff Brooks, who struggled and then took a Taser from one officer and ran away.

When asked whether the Taser would be legally considered a deadly weapon once it was in Brooks's hands, Howard said that argument was a "diversion from the real facts."

"The whole argument about the Taser is way off the track, and I hope that people will really get to the substance of this case, and what I think people should be talking about is why is it in this country that African Americans continue to get killed by police officers," he said.

Brooks' death, coming two weeks after the death of George Floyd in Minneapolis police custody, sparked more protests and demonstrations across Atlanta, and the city's police chief stepped down less than a day later.

Devin Brosnan, one of the Atlanta police officers charged in the death of Brooks, said he would not have done anything differently that night. 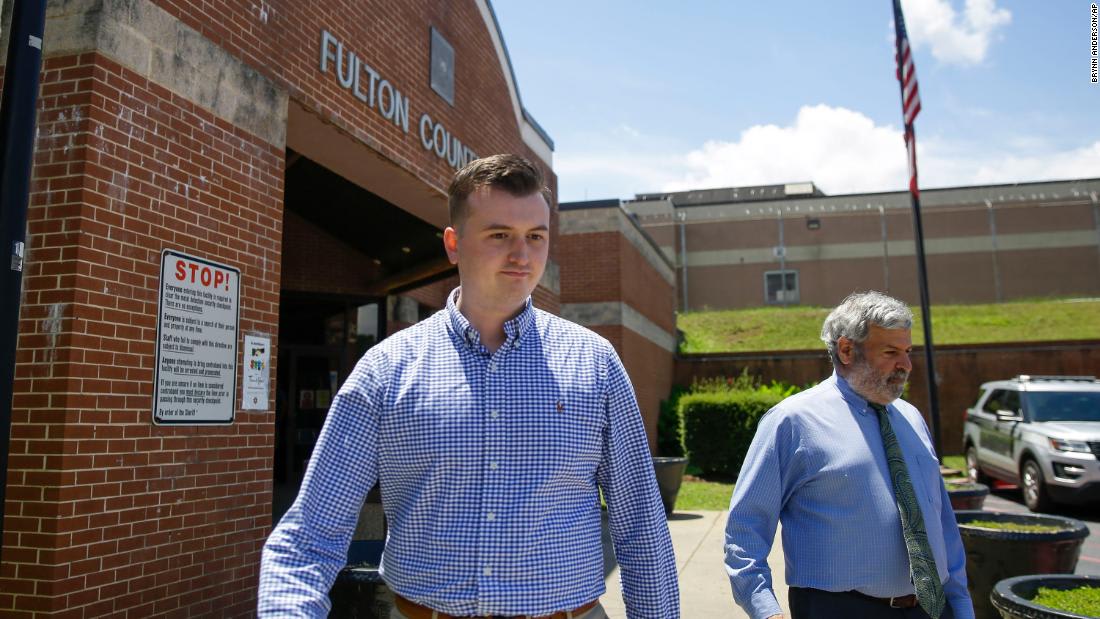 In a lengthy statement released on Twitter, football player Kerry Martin Jr. tweeted that the coach was mistreating him and other players.

“We need a change in our program,” he tweeted, including allegations of inappropriate comments by Koenning regarding religion, politics and the recent protests.

University response: In a statement Tuesday, West Virginia athletics director Shane Lyons thanked Martin for having the courage to bring his concerns to light.

“We will not tolerate any form of racism, discrimination or bias on our campus, including our athletic programs. Coach Vic Koenning has been placed on administrative leave effective immediately, and the department will work with the appropriate parties to conduct a thorough investigation into these allegations. This is serious, and we will act appropriately and in the best interests of our student-athletes."

When asked why the agency characterized the rope as a noose, Birmingham FBI spokesperson Paul Damon told CNN: "It's my understanding that the rope was fashioned into a noose knot and used as a door pull."

Damon said 15 agents were assigned to an investigation to get to the bottom of the case quickly. They considered it an important case and an important issue.

What's the background? The FBI said Tuesday that a noose found in Wallace's garage at the Talladega Superspeedway had been there since last year and Wallace was therefore not the victim of a hate crime.

NASCAR, mentioning the FBI report, described the item as a "garage door pull rope fashioned like a noose." 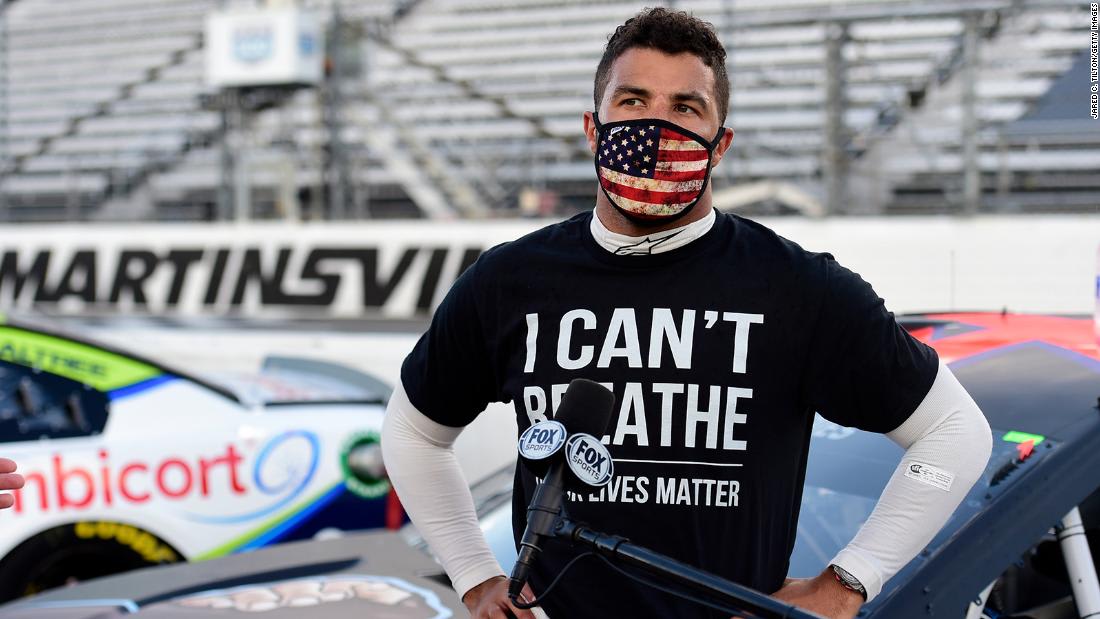 FBI says Bubba Wallace not a target of a hate crime

This comes at a time of unrest in the United States as protesters against racial injustice and police violence call for major reform.

"Understand that healthy communities are safe communities," the California Democrat told CNN on Tuesday. "I'm not saying get rid of police but we have to invest in the health and well-being of our communities."

Harris said factors like access to education, resources for businesses and access to health care all contribute to a "healthy community," and in turn, make for safer places that require a lower police presence.

Harris said when cities spend nearly one-third of their budget on policing, "that's not a good return on investment for our taxpayers."

"If we want safe communities, we have to invest in the health and well-being and they will be safe," she said.

Richard Petty Motorsports, which fields the Number 43 car driven by Bubba Wallace, responded to the conclusion of the FBI and NASCAR investigation into a noose found in Wallace's garage.

“In accordance with established protocols, our team member notified the crew chief who notified NASCAR of the presence of the item in the garage stall. NASCAR leadership determined the course of action going forward with an immediate investigation into the item and its possible origins," the statement said.

The company also said in the early stages of the investigation, Wallace was told about the noose and other information gathered by officials.

“Richard Petty Motorsports fully cooperated with NASCAR and authorities as they conducted an investigation into the situation," the statement said.

"No member of Richard Petty Motorsports, nor Wallace had any involvement with the presence of the rope," it continued.

The statement also said the company was "thankful for the swift and thorough investigation" and for the support of NASCAR, the industry and their fans.

The Los Angeles County Board of Supervisors are demanding an independent investigation into the recent L.A. County Sheriff’s Department shooting that killed 18-year-old Andres Guardado.

The board voted unanimously for a motion, put forth by Supervisor Mark Ridley-Thomas, that mandates the inspector general be provided with all evidence throughout the investigation.

“Our principal concern is that the people of this county have a degree of confidence that we have attempted to make sure that there is accountability, transparency, that there is nothing being concealed,” Ridley-Thomas said.

Some background: The L.A. County Sheriff's Department put a security hold on the coroner’s case, preventing the release of any information beyond the name and age of the deceased. This measure ensures that the independent investigators are granted “immediate and full access to all evidence requested,” including information from the coroner.

“But even when there is secrecy, it’s important that there be some kind of means of verifying the integrity of the process,” he said.

Huntsman said that there has been a history of a problem with establishing cooperation. In this case specifically, his office is currently awaiting a response from the L.A. County Sheriff’s Department to their request to view video evidence relevant to the case.

Police Chief Robert J. Schroeder addressed a termination letter to Louisville Metro Police Det. Brett Hankison, saying he was taking this action based on the investigation conducted by the department’s public integrity unit, which found violations of the use of deadly force as well as obedience to rules and regulations.

The 26-year-old African American EMT was killed when police broke down the door to her apartment in an attempted drug sting and shot her eight times.

Schroeder also added that Hankison’s “actions displayed an extreme indifference to the value of human life” when he “wantonly and blindly fired ten rounds into the apartment of Breonna Taylor on March 13, 2020.”

There was no immediate comment from Hankison's attorney concerning the termination letter.

Greg Sankey, commissioner of the Southeastern Conference, defended his organizations's threat to remove championship events in Mississippi over the state’s flag Confederate symbol, saying he had come to see the ability to rotate campuses as "a lever we could use to encourage change."

"I truly believe we're past the time for change. …We are going into a cycle where we're looking at some future championship sites," Sankey told CNN's Wolf Blitzer today.

"We rotate certain championships between our campuses which are welcoming places and have identified that, if you will, a lever we could use to encourage change because we want our campuses, we want our states ... to be the welcoming environment for our student athletes that we expect," he added.

Sankey went on to say that he has noted a change in how the SEC sees their athletes using their influence to fight for social change.

"I was on a call of our head football coaches ... and one of the coaches observed that our student-athletes, our young people are asking us for support rather than permission," he said.

"Perhaps years ago it was permission but [now] they're looking for support," he said.