President Trump has weighed in on a stunning video of a 75-year-old protester who was seriously injured after being shoved by police officers in Buffalo, New York, last week, questioning whether it was a “set up.”

Video of the demonstration Thursday showed a row of officers walking toward the man and two pushing him. His head bled onto the sidewalk as officers walked past him, some looking down at him.

Trump claimed in his tweet that the man, Martin Gugino, “fell harder than he was pushed.”

CNN has reported 57 police officers in Buffalo have resigned from the force's emergency response team following the suspension of two officers.

An investigation is underway, and Gov. Andrew Cuomo called the incident "wholly unjustified and utterly disgraceful."

George Floyd will travel the last mile of his journey to buried Tuesday in a horse-drawn carriage, according to a release from the City of Pearland from Monday.

A private memorial service for Floyd will be held Tuesday at noon ET at the Fountain of Praise Church in Houston, Texas, according to a release from the Floyd family and attorney Ben Crump.

According to the City of Pearland, Floyd's body will then be escorted by the Houston Police Department into Pearland's Houston Memorial Gardens. The city said that his body will arrive at the site after 2 p.m. ET.

"We do know Mr. Floyd will travel the last mile of the funeral procession in a horse drawn carriage," the statement added.

The carriage carrying Floyd's body is expected to travel down Cullen Boulevard where barricades will be set up to allow spectators to view the procession safely, the statement from Pearland said. The city has also requested spectators practice social distancing and wear masks.

The city said it has no idea how many people will turn out to watch Floyd's body be carried to its final resting place.

Family and close friends will gather in Houston today for the funeral of George Floyd, two weeks after he died at the hands of Minneapolis police officers.

The private funeral will take place at The Fountain of Praise Church at 11 a.m. local time and be live-streamed, said La'Torria Lemon, spokesperson for Fort Bend Memorial Planning Center.

The service will be a celebration of Floyd's life, Mia K. Wright, the co-pastor of The Fountain of Praise church, told CNN's Don Lemon Monday night.

"We celebrate a life that had its ups and downs as many lives do but also a life that was connected to God and one that all people around the world have now connected to because of the tragedy and the trauma by which he passed," Wright said.

"And so we want to have a home-going celebration, we want to remember his name," she added.

Due to social distancing guidelines, Tuesday's service will be limited to 500 people.

Boxing champion Floyd Mayweather is handling all the expenses for Floyd's funeral, Lemon said in a news release.

Floyd grew up in Houston's Third Ward and will be buried next to his mother following today's funeral service, according to the Fort Bend Memorial Planning Center.

On Monday, thousands of mourners gathered at The Fountain of Praise church to pay their respects to Floyd during a public visitation. The memorial was the third stop in a series of events to celebrate his life.

Tennis star Venus Williams said the solidarity she has seen in recent protests over the death in custody of George Floyd "has brought me to tears," writing Monday in an online post that "just as sexism is not only a 'women's issue,' racism is not only a 'black issue.'"

"When the majority groups stay quiet, when they sit in the chair of disbelief, they unwittingly condone the oppression of marginalized groups," Williams wrote on Instagram. "Those with power and privilege actually have an easier time getting heard. They must CONTINUALLY exercise that privilege!"

Williams has seen power in people banding together behind the cause, she said, referencing her fight for equal prize money for women players in tennis Grand Slam tournaments.

On Sunday, Black Lives Matter protesters in Bristol, UK, pulled down a statue of 17th-century slave trader Edward Colston and rolled it through the streets before dumping it, unceremoniously, into the River Avon.

Some applauded the move, while others decried what they called "mob rule."

With a colonial history spanning centuries -- and a mania for erecting statues in the 19th century -- Britain's towns and cities are dotted with monuments to figures like Colston.

For some, the statues have melted into the background of daily life, but many people are now questioning whether they should still stand on their pedestals.

On Tuesday, the Mayor of London, Sadiq Khan, announced a commission to examine the future of landmarks around the UK capital, including murals, street art, street names and statues.

Actions against statues linked to the slave trade and imperialism have also gained traction in other parts of Europe, with protesters in Belgium defacing several monuments to King Leopold II in recent days.

In the US, a string of Confederate statues have been removed by authorities in the wake of widespread protests over the death of George Floyd.

While these actions have divided public opinion, they feed into a growing conversation about what should happen to statues of individuals like Colston, who profited from the suffering of so many. 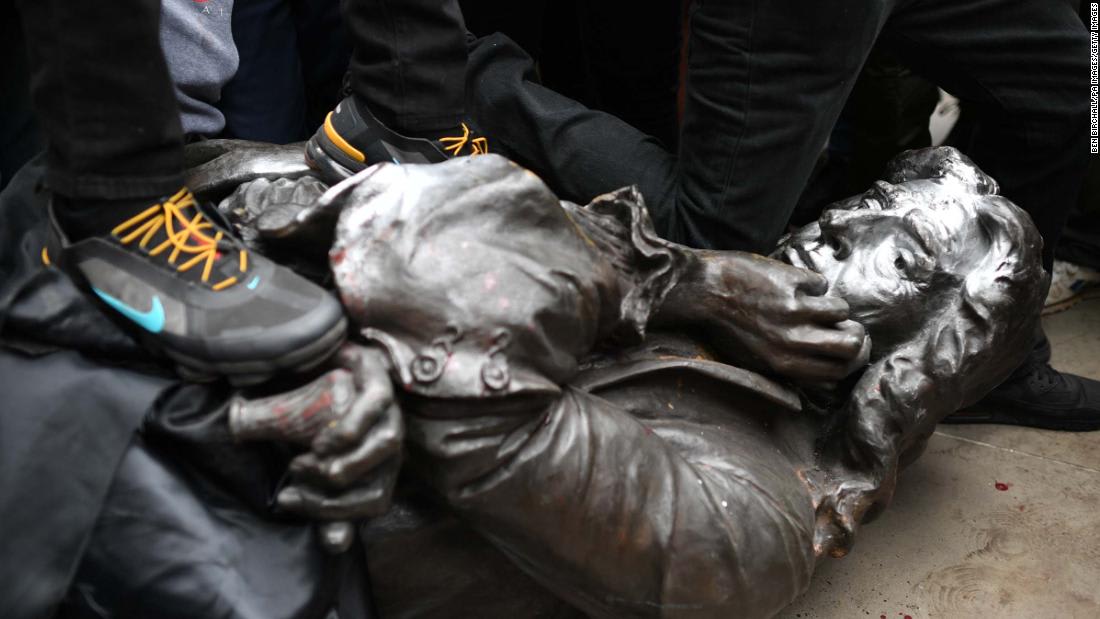 It's not the first locale to break up a department, but no cities as populous have ever attempted it. Minneapolis city council members haven't specified what will replace it if the department disbands.

Camden, New Jersey, may be the closest thing to a case study they can get.

The city, home to a population about 17% of Minneapolis' size, dissolved its police department in 2012 and replaced it with an entirely new one, after corruption rendered the existing agency unfixable.

Before its police reforms, Camden was routinely named one of the most violent cities in the US.

Now, seven years after the old department was booted, the city's crime has dropped by close to half. Officers host outdoor parties for residents and knock on doors to introduce themselves. It's a radically different Camden than it was even a decade ago. 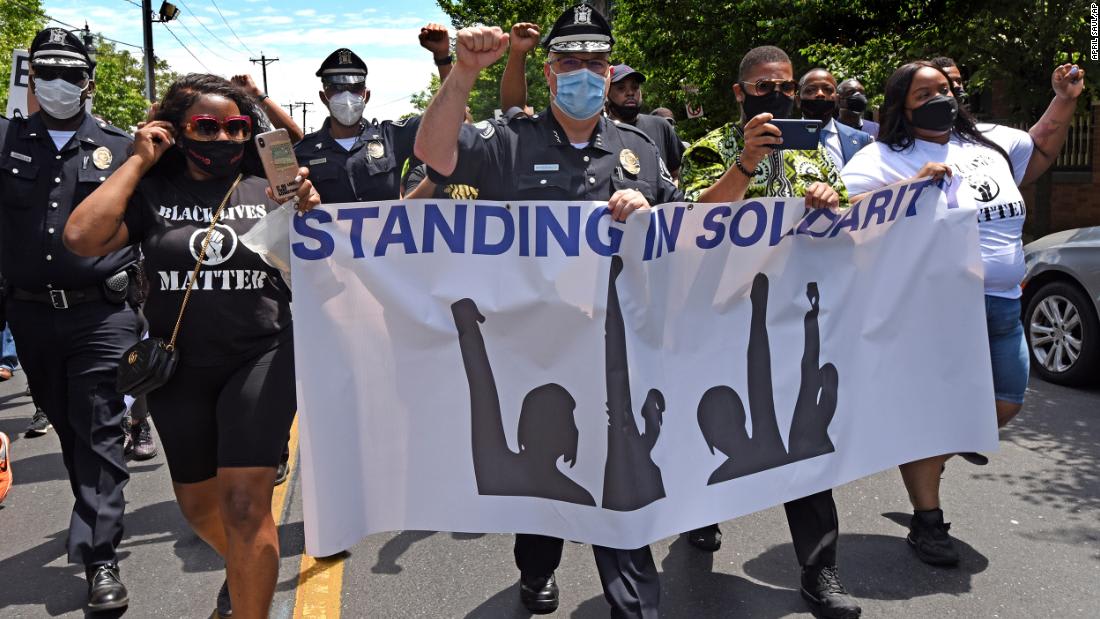 This city disbanded its police department 7 years ago. Here's what happened next

George Floyd will travel the last mile of his funeral procession in a horse drawn carriage escorted by the Houston Police Department, according to a press from the City of Pearland.

The private funeral is set for 11 a.m. Tuesday, local time, at the Fountain of Praise Church in Houston.

The procession will arrive at Houston Memorial Gardens in Pearland, south of Houston, sometime after 1 p.m, according to the release. It said the public should monitor local news outlets for updates and visit Transtar online for traffic information.

"The public is certainly welcome to pay respects at public locations on the route, including on sidewalks. Barricades are being placed along the procession route on Cullen where the horse-drawn carriage will travel to prevent vehicular access and pedestrian access to the roadway. These barricades will help keep visitors safe and help maintain traffic safety," said the release.

Attendees have been requested to stay behind the barricades to allow the procession to pass safely, and to ensure the safety of Floyd’s family. Attendees have also been encouraged to wear face masks and maintain social distancing.

Seattle Seahawks' new signing Carlos Hyde says the NFL should offer Colin Kaepernick a route back to the sport to prove it is serious about change.

Last week, NFL Commissioner Roger Goodell said the league was wrong not to listen to its players' protests and that it would "encourage all to speak out and peacefully protest."

"What can the NFL do? I think the NFL can start by signing Kaep back," Hyde, a former teammate of Kaepernick at the 49ers, told reporters on Monday.

"I think if they sign Kaep back, that'll show that they're really trying to move in a different direction. Because Kaep was making a statement four years ago about what's going on in today's world and the NFL didn't bother to listen to him then, so I think they should start by doing that." 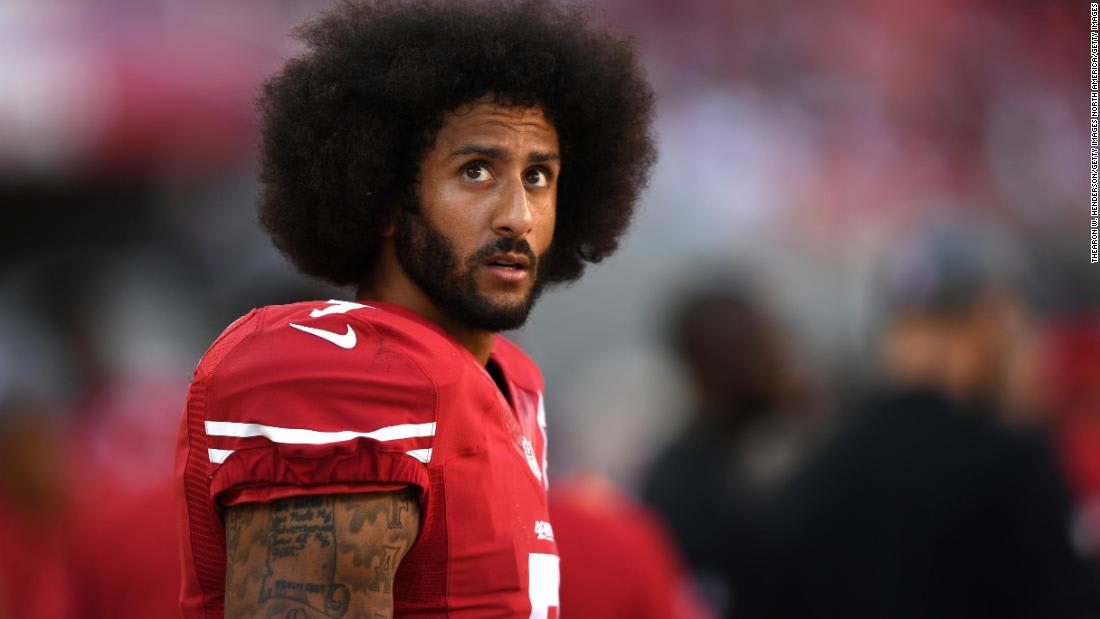 Despite progress on the continent -- our growing economies, legitimate democracies, cultural contributions and increasing significance on the global stage -- there are still too many examples of massive injustices perpetrated by black people towards other black people every day, with little attention and almost no outrage, writes Moky Makura.

No headlines, few hashtags and no movement to call out the injustice.

Black people in Africa may not be dying as a result of racism, but far too many are dying because of their ethnicity, their political beliefs, their poverty and their gender.

As Africans we have our own George Floyd, Eric Garner and Manuel Ellis.

South Africa's post-apartheid examples include Andries Tatane killed in 2011 during a "service delivery protest"; then there was the Marikana Massacre in 2012 where 34 striking mineworkers were shot dead by police; and more recently Collins Khoza who was allegedly killed during the country's Covid-19 lockdown.

And it's not just in South Africa. In Nigeria, there's the recent alleged police shooting of 16-year-old Tina Ezekwe, and in Kenya the case of 13-year-old Yassin Hussein Moyo who was killed on his balcony at home.

The continent that gave us icons like Kwame Nkrumah, Nelson Mandela, Fela Kuti, has also given us thousands of anonymous heroes who have sacrificed their lives with no recognition, no campaigns.

The Rwandan Genocide, South Africa's xenophobic uprisings, Boko Haram's ongoing reign of terror in Nigeria are stark reminders of these nameless heroes; black Africans who suffered at the hands of black Africans.

They remind us that the doling out of injustice is not the preserve of white people nor is it always about race. Africans are equally complicit in ensuring that black lives don't always matter. 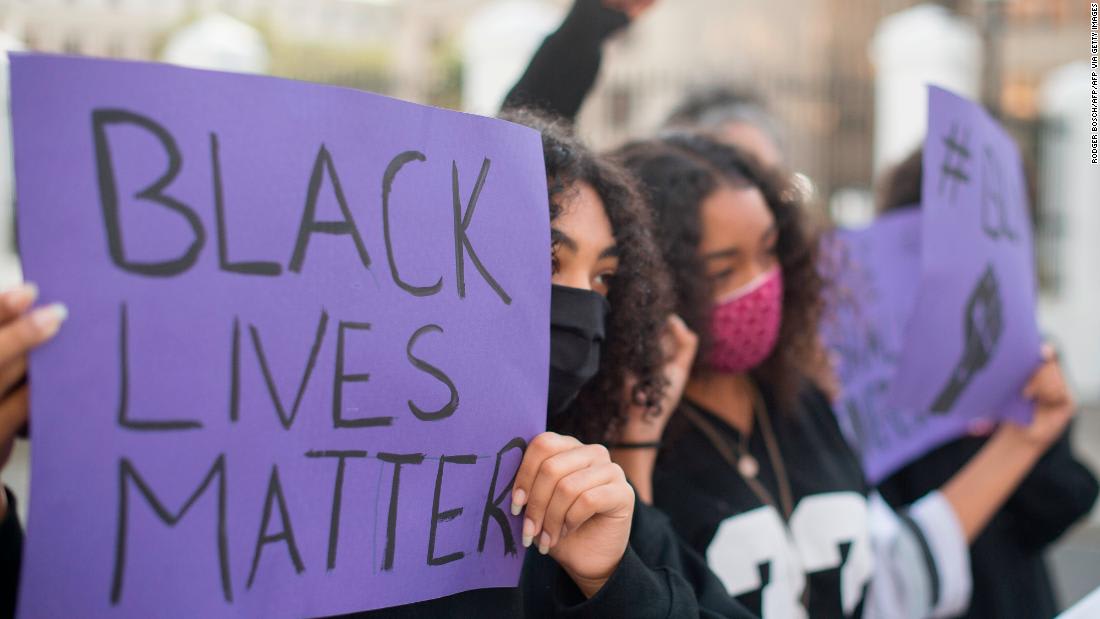