Fountain of Praise Pastor Mia K. Wright opened the funeral service for George Floyd, calling it a “homegoing celebration” and “a moment of connectivity” around the life of Floyd.

“In the tradition of the African American church, this will be a homegoing celebration," she said.

Wright called on those gathering to celebrate Floyd's life.

Yesterday’s public visitation was also held at the same church, where thousands of mourners paid their respects to Floyd.

A funeral for George Floyd is underway in Houston at The Fountain of Praise Church.

According to a program for the service, four dignitaries are expected to give remarks:

House Majority Leader Steny Hoyer said Tuesday that Democrats are aiming to bring their policing reform package to the House floor for a vote during the week of June 22.

The target date is a week sooner than the US House of Representatives had previously planned to return.

Hoyer also said during his press briefing that Republicans will have “full opportunity to engage” with crafting the legislation in an upcoming markup hearing. Congressional Democrats introduced the measure Monday with no GOP cosponsors.

Hoyer argued Democrats aren’t “rushing this to the floor” and suggested amendments and bipartisan agreements could be added to the legislation in the coming days. It’s “premature” to say the package won’t be bipartisan, he said.

Republicans are planning to introduce their own policing plan, led by Rep. Jim Jordan, a source familiar tells CNN. Jordan, the top Republican on the Judiciary Committee, is working with Minority Leader Kevin McCarthy’s office, GOP Whip Steve Scalise, and other members in the conference to write the legislation. The source said the bill is “in the very early stages” and members are “considering all options.”

Asked if Democrats could attempt to pass a combination of their policing legislation and their $3 trillion coronavirus stimulus bill, Hoyer said he supposes it’s “possible,” but he would prefer to keep them separate. 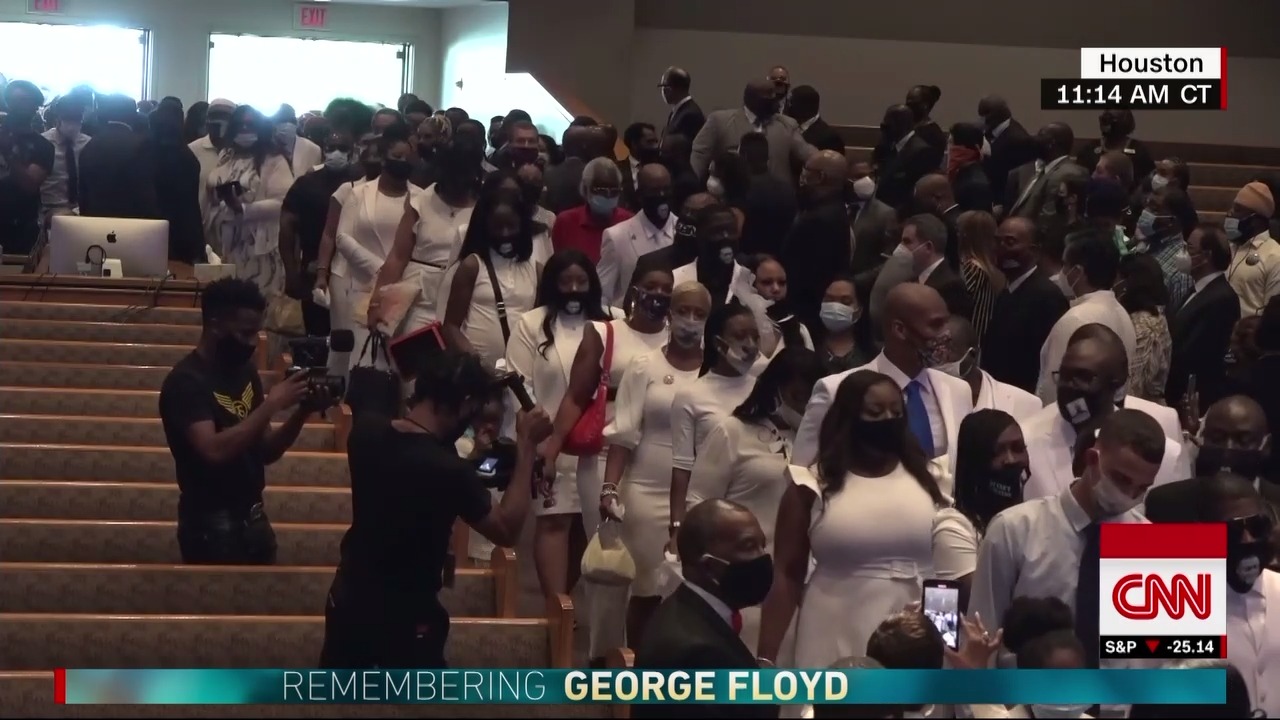 George Floyd's family is arriving The Fountain of Praise Church in Houston ahead of his funeral. They're dressed in white as they enter the church.

Rev. Al Sharpton is expected to give a eulogy at today's service.

Standing outside Tuesday's funeral for George Floyd, Houston Police Chief Art Acevedo said the problem with modern policing is "the human condition" and called for national laws and standards around policing in the United States.

"We have 18,000 police departments with 18,000 ways of doing business and 18,000 sets of policies and it's time for our country to realize and the Congress that when it comes to the critical policies, in terms of use of force and things of that nature, that we have to have a national standards, national standard in terms of policy, law, and training requirements," Acevedo told CNN Monday.

Acevedo said what happened to Floyd was "without a doubt criminal" and "not consistent with the expectations of the modern 21st century police officers."

"There's still too many incidents where bad policing is tolerated so we just need to say no," he said.

Acevedo also said he believed this was a "watershed moment" for his city and for the nation.

"Even though George Floyd was taken really from the Floyd family here in the city of Houston, we've all come together once again Houston-strong, showing that when we work together and we work in a manner and in a spirit that is constructive not destructive that we can change the world," he said.

Family and close friends of George Floyd are gathering in Houston right now for his funeral, two weeks after he was killed while in Minneapolis police custody.

The private funeral in Houston, where Floyd grew up, will take place at The Fountain of Praise Church at 11 a.m. local time, or noon ET.

The service will also be live-streamed, according to La'Torria Lemon, with the Fort Bend Memorial Planning Center, the funeral home where Floyd's visitation took place Monday.

The hearse carrying Floyd's golden casket arrived this morning at the church. The casket was carried into the church by six men wearing masks as a row of police officers stood at attention.

New York Gov. Andrew Cuomo said President Trump should apologize for his suggestion that a 75-year-old Buffalo protester who was pushed by two officers was "a set up."

"How reckless, how irresponsible, how mean, how crude," Cuomo said. "He should apologize for that tweet."

What Trump said: This morning, Trump tweeted about the incident questioning whether it was a “set up.” The President claimed in his tweet that the man, Martin Gugino, “fell harder than he was pushed.”

Video of the demonstration Thursday showed a row of officers walking toward the man and two pushing him. His head bled onto the sidewalk as officers walked past him, some looking down at him. Gugino is still hospitalized, but out of the ICU, his lawyer said.

"You think the blood coming out of his head was staged?" Cuomo asked. "You saw his head hit the pavement, you see blood on the pavement."

Wanda Johnson, whose son Oscar Grant was killed by an officer in 2009, called for accountability throughout the judicial system.

"It’s very difficult to see the disparities in America, the land that’s supposed to be the home of free and opportunity," she said.

Her call comes as protests continue over George Floyd’s death and older complaints of police brutality against black Americans are coming to light due to increased scrutiny and reviews.

Johannes Mehserle, who was a Bay Area Rapid Transit police officer at the time of the incident, was found guilty of shooting 22-year-old Oscar Grant on an Oakland train platform on January 1, 2009.

Grant's killing sparked public furor, when cell phone video went viral showing Mehserle shooting him in the back, while another officer knelt over him. His death became the subject of the award-winning movie "Fruitvale Station," named after the BART station, where he was shot.

The ex-officer was sentenced to two years in prison after his involuntary manslaughter conviction but was released after serving 11 months.

“Justice would have been that our sons are alive today,” Johnson said about her son and the other black lives lost to police violence. “Because we face the injustice of losing our sons, we now have to deal with trying to fight the system to get the charge, which is another unacceptable thing that we have to go through, because wrong is wrong.”

Johnson said that “discriminatory practices” have forced black parents to have difficult conversations with their kids.

“The very night that Oscar encountered the police, he was telling his friends that, you know, ‘Hey, be quiet. Follow their directions. We're going to go home.’ And yet Oscar, you know, lost his life.”

For George Floyd’s daughter, Gianna, Johnson advised his family and friends to be there for her every step of the way.

“Be there when she needs you. And that's going to be all the time because a young daughter yearns for her father,” she said adding that 11 years later, Grant’s daughter still feels his loss.

“It’s devastating to see even Tatiana grow up without her father," she added.

"What will be clear — the street name and on the streets of our city — is that message that now this city must fully, fully deeply feel and this nation must as well, that Black Lives Matter," de Blasio said.

This follows a Sunday meeting with activists, including Gwen Carr, the mother of Eric Garner, who died after an NYPD officer used a chokehold on him.