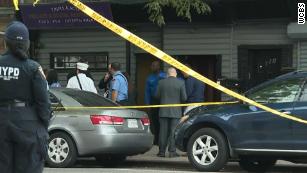 Our live coverage of the shooting has ended but you can scroll through the posts to read more.

The deadly shooting on Utica Avenue in Brooklyn happened at an illegal gambling location, according to the New York Police Department (NYPD).

The four victims and those injured were identified as between the ages of 32 and 49, Chief of Detectives Dermot F. Shea told the media Saturday morning. The deceased were all men.

“We have some individuals back at the 77th precinct and we’re trying to piece together exactly what transpired,” Shea said, adding that police are continuing to investigate, are canvassing the neighborhood, and are reviewing body cam footage.

There were multiple shots fired inside the location and two firearms, a 9mm and revolver, were recovered, Shea said. Three other people were shot and suffered non-life threatening injuries, he added.

Police also found dice and playing cards inside the location.

The NYPD will host a press conference at 9:45 a.m. ET to discuss the shooting that left at least four people dead in Brooklyn.

The conference will be run by NYPD Chief of Patrol Rodney K. Harrison and Chief of Detectives Dermot F. Shea.

The shooting appears to have happened at “some sort of social club" on Utica Avenue, NYPD spokesman Brian Magoolaghan.

At least three people were shot and suffered non-life-threatening wounds, the NYPD added.

No arrests have been made in connection to a shooting Saturday morning in Brooklyn, according to NYPD spokesman Brian Magoolaghan.

Police do not have any information yet on what the motive for the shooting might have been, nor do they have any info on a suspect at this time, Magoolaghan said.

Preliminarily, the shooting appears to have occurred at “some sort of social club,” Magoolaghan said.

While four gunshot victims were dead on arrival, the three additional people who were shot suffered non-life-threatening wounds.

At least four people have died and at least three people have been injured following a shooting on Utica Avenue in Brooklyn, according to a spokesperson with the New York City Fire Department (FDNY).

Firefighters responded to the scene at about 7:06 a.m. Saturday. Four people were dead on arrival and three people were taken to area hospitals with serious, but not life-threatening conditions, FDNY said.