There have been more than 4,700 earthquakes since Thursday’s 6.4-magnitude event, according to John Bellini, a geophysicist with the USGS.

“They are coming in every 30 second, every minute," he said.

Since Friday night's 7.1-magnitude quake, there have been three quakes with magnitudes of 5 or greater. Those three all occurred within the first hour after the 7.1 quake; one was a 5.5 magnitude and there were two 5.4 quakes.

Officials in Ridgecrest, California, will hold a news conference at 1:30 p.m. ET (that's 10:30 a.m. PT) to give an update on last night's earthquake.

If you're just catching up on the news, here's what we know so far about the Friday night quake: 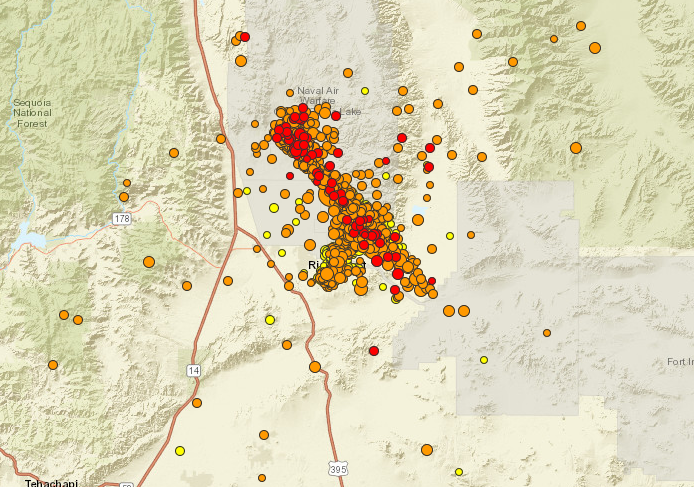 There have been more than 2,300 earthquakes since the 6.4-magnitude quake that rattled Southern California on Thursday.

There were around 1,500 quakes in the area between the Thursday earthquake — which we now know was a foreshock — and the 7.1-magnitude quake last night, according to USGS.

Of the 2,300 quakes since the Fourth of July, 300 had magnitudes of 3 or more, which means they were strong enough to be felt. And 50 of them have been had magnitudes of 4 or more. Quakes with that strength have enough power to cause damage.

Kern County Fire Chief David Witt said there are no known fatalities from the earthquake. And while officials believe there is damage, they're not sure how bad it is yet.

“We do feel like there is damage, but we don’t know the extent of it yet,” Witt said at a news conference moments ago. “Nobody was trapped, no major collapses that we know of, but we are out there searching.”

Fire officials are inspecting buildings and the Army Corps is doing a detailed inspection of the dam, he said.

Witt said all of the fire stations are up and running and everybody has power. They are prepared to handle any vegetation or structure fires in Kern County, Witt said.

Experts have been comparing last night's 7.1-magnitude earthquake to the 6.4-magnitude quake that hit on Thursday. (Technically, the Thursday quake was a foreshock leading up to Friday's).

The Friday quake has been described as both five times bigger and 11 times stronger than the Independence Day earthquake.

That's not a typo — here's how both those figures are possible:

But the strength — not the size — is the more important figure. The energy released in a quake is what causes damage. Or, as the USGS puts it: "It is really the energy or strength that knocks down buildings."

There's a 27% chance that there will be another earthquake with a magnitude of 6 or more within the next week, according to the United States Geological Survey.

The possibility that another 7-magnitude quake will strike is 3%. Friday's earthquake measured 7.1 and Thursday's was a 6.4.

On their website, the USGS broke down the possibility of more aftershocks in the next week (until July 13). Here's the forecast:

Remember:  These probabilities will continue to decrease as time goes on.

CNN's Sara Sidner is in Ridgecrest, California, close to where last night's 7.1-magnitude earthquake was centered.

She said several residents took their mattresses outside and slept in their driveways in case more quakes struck overnight.

"They simply did not feel safe enough in their homes with stuff coming down," Sidner said. "They were so concerned that more of it was going to come down on them. They decided that it would be safer to sleep outside."

Sidner said the people she's spoken to are not physically hurt — but they are scared.

"When you lose all ability and sense of — sort of your own control of your surroundings, it is scary. When the Earth is literally moving underneath you and things are falling off the walls and you don't know how much longer it's going to go on, it feels like eternity as one of these earthquakes roll through."

Since Friday night's quake, there has been an average of one aftershock per minute since in the southern part of California, according to the United States Geological Survey website.

After an earthquake as powerful as the one that hit Friday, residents can expect an aftershock reaching up to a magnitude of 6.0, officials said Saturday, and should even be prepared for a scarier shake.

With that in mind, Ridgecrest Police Chief Jed McLaughlin offered up some advice:

"I would probably start taking some stuff off the walls if they're not already down ... Make sure you're not sleeping under something that's still hung up."

The chief warned residents to stay prepared and load up on supplies while stores are still open, "just in case that we have something bigger than we had today."

He said residents should remain vigilant for the next two weeks.

"This isn't going to stop in the near future," he said. "The aftershocks, they haven't slowed down since the 7.1 (magnitude earthquake). For a period of time there was constant vibration."

That means the latest earthquake was the mainshock, while Thursday's quake was a foreshock, according to Jones.

But the threat isn't over: More earthquakes are possible. California Gov. Gavin Newsom said he has activated the state emergency operation center to its highest level.