Our live coverage has ended, but you can read more about the fires here.

The fire that prompted some residents in Vacaville to evacuate is among dozens of blazes burning in parts of the state. They come during a brutal heat wave and power outages — both intentional and unintentional — as the power grid struggles to keep up with demand.

California Gov. Gavin Newsom declared a statewide emergency Tuesday to deploy resources to "combat fires burning across the state which have been exacerbated by the effects of the historic West Coast heat wave and sustained high winds."

The Vacaville-area fire is part of the LNU Lightning Complex fires — a series of wildfires that started Monday and Tuesday and have burned more than 32,000 acres in the northern Bay Area counties of Napa, Sonoma and Solano, state and county officials said.

Here's what we know about some of the other fires in California:

Flames from the LNU Lightning Complex Fire are forced some Vacaville, California, residents to flee from their homes in the wee early of the morning.

An exact number of evacuees could not be provided at this time as the emergency process is ongoing, Solano Sheriff spokesperson Le’Ron Cummings told CNN.

Homes have burned in the fire, Cummings said, but it is unclear how many.

About the fire: The LNU Lightning Complex is a force of at least seven separate fires affecting areas of Solano, Sonoma and Napa Counties. More than 32,000 acres have burned, according to Cal Fire.

Caroline Newell left her home in Winters, California, around midnight and drove to her parents’ home 20 minutes away in Fairfield. She said she started packing her things when thick smoke started inching closer to her home and at that time, evacuation orders or warnings hadn’t even been put out in her area.

Newell said she “got caught off guard by how fast it got close” to her. She was able to grab her cat but had to leave some of her chickens behind. Newell said she left the coop open hoping they’d run out on their own.

“This is the third time I've evacuated this summer,” Newell said. “Both previous times firecrews were out in force and got the flames under control quickly. This time around there seemed to be less resources available just due to how many fires are burning right now. This fire seems to be really fast and really intense with not enough resources to fight back.”

She took photos as she fled her home. Here's a look at the scene: 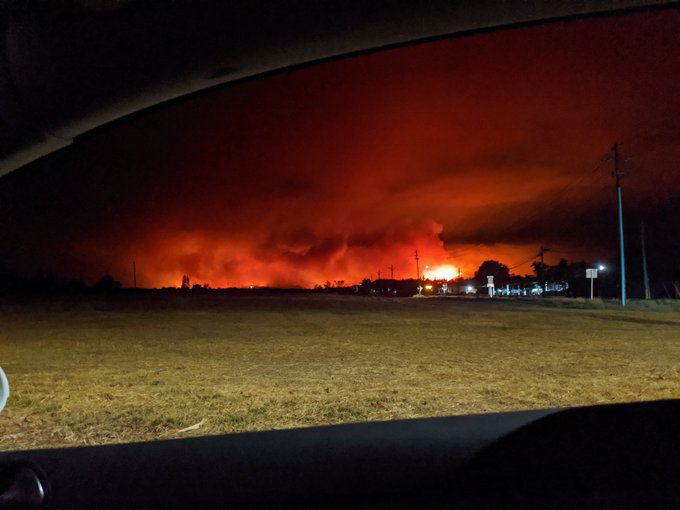 Some residents in the city of Vacaville, California, were asked to evacuate their homes this morning as a wildfire is raging in the area.

The Vacaville Fire Protection District tweeted that evacuations are in effect for "all of Pleasants Valley Rd and connecting streets/roads."

"There are numerous locations where people are trying to get out and we're working our way up to them," the Solano County Sheriff dispatch told CNN.

Here's the latest from the Solano County Office of Emergency Services:

The wildfire impacting the county is called the LNU Lightning Complex Fire, the Solano County Office of Emergency Services said in a post on Facebook. It's one of dozens of fires burning across California.

Vacaville is located in Solano County in Northern California. The city has a population of approximately 100,000 people and is located between San Francisco and Sacramento.

CNN is on the ground in Vacaville: