A Minnesota woman, Melissa Gerads Jones, said she suffered for nearly 400 days with Covid-19. But after getting vaccinated, her symptoms lifted.

She and her daughter became ill from Covid-19 in March 2020, she said.

“We were pretty sick right from the get-go. We had a lot of the chest symptoms — chest pain, chest congestion, incredible pressure on our chest, like someone was pushing down on our chest as hard as they could — a runny nose, sore throat, some nauseous-ness and eventually some brain fog and incredible fatigue,” she said on CNN's "New Day."

In April 2021, she received her second shot of the Moderna vaccine.

“And then at about day five after that second vaccine, I was walking through the living room of my home and all of a sudden I became aware of the fact that the chest pain that was centered over my heart almost the whole time was gone. And then another couple days went by and the chest congestion seemed to clear up. And as the days went on, the symptoms just sort of went away. The last to go was … the brain fog and the fatigue. And it was maybe a couple weeks after that second shot where I realized everything was gone. And I feel as healthy as I did before I got sick,” she said.

Gerads Jones said she “absolutely” feels that getting vaccinated has given her back her life, and she encouraged others to get their shots.

“My children are the most important thing to me. … I fought through Covid so I could stay there for them. And if you're on the fence about getting a vaccine, I guess I would just ask you to think about what matters to you? What's important to you? And then make sure that you do the things that you can do to be there for them and be healthy for them,” she said.

Most officials and health experts have stressed the importance of students being able to safely return to school in the new academic year, but vaccine hesitancy could impact how districts move forward.

Only a quarter of Americans age 12 to 15 are fully vaccinated against Covid-19, according to data published Tuesday by the CDC, making them the age group with the lowest rate of vaccination.

Here is the share of the population fully vaccinated by age group:

California's K-12 schools were directed Monday to turn away students from campuses for refusing to wear face coverings in class, but the rules were revised just hours later to give schools more leeway in implementing protocol.

Despite the initial guidance stating, "Schools must exclude students from campus if they are not exempt from wearing a face covering under [California Department of Public Health] guidelines and refuse to wear one provided by the school," a spokesperson for Gov. Gavin Newsom's office, Alex Stack, insists the intent was not to turn away students.

"The way [the guidance] was written didn't accurately reflect the intent, so it was rewritten," Stack told CNN, acknowledging the statement came across as "banning kids." "It's important to get this right so parents and students know what to expect going in to school year."

New York City Mayor Bill de Blasio said the city's guidance could change as the school year gets closer, but for now families should assume masks will still be worn in schools come September.

"We've been constantly working with the CDC, but we also in this case have been very careful given everything the city has been through ... for now, we're sticking with the idea that, you know, wearing the masks is the smart thing to do in schools," De Blasio said. 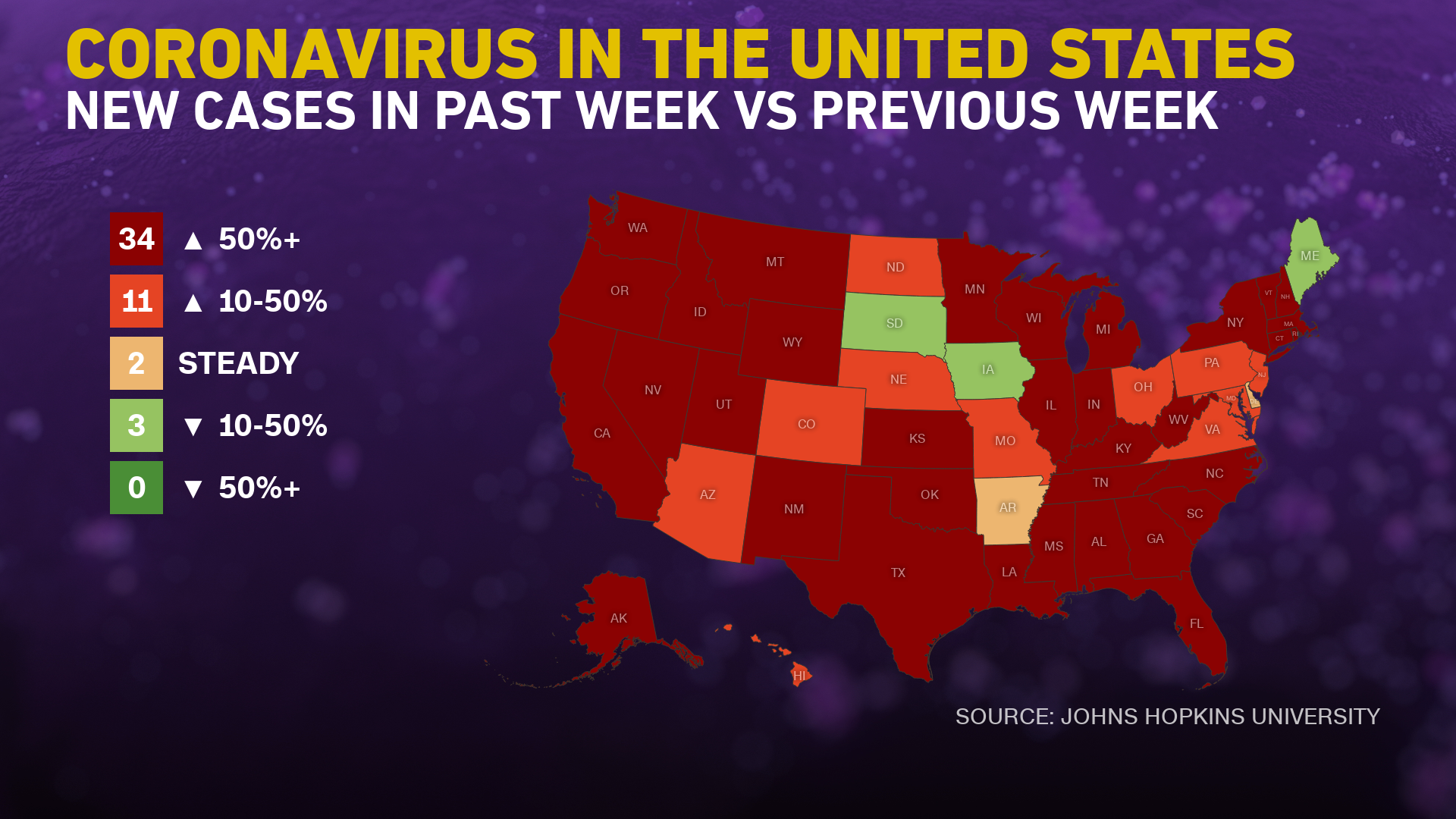 In Los Angeles County, the country's most populous, there has been a 500% increase in cases over the past month, according to the county's latest health data.

As cases increase, only 48.1% of the population is fully vaccinated, according to data from the US Centers for Disease Control and Prevention. And though many may brush off the risk of low vaccination rates to children, citing their low Covid-19 mortality rates, Dr. Peter Hotez, a vaccinologist and dean of the National School of Tropical Medicine at Baylor College of Medicine, said they are still at risk for serious complications.

Hotez told CNN's Anderson Cooper Tuesday that if vaccination rates among adults and kids 12 and older continue to lag amid increased spread of the virus, the youngest members of the population will be most affected.

"Transmission will continue to accelerate ... and the ones who will also pay the price, in addition to the unvaccinated adolescents, are the little kids who depend on the adults and adolescents to get vaccinated in order to slow or halt transmission."

Many more adolescents could become hospitalized, Hotez warned, adding up to 30% of children infected could develop long-haul Covid-19.

Scientists are now learning about neurological consequences to long-haul Covid-19, Hotez added. Some studies have shown impacts on the brain of people who have been infected with the virus. One study in April found 34% of Covid-19 survivors received a diagnosis for a neurological or psychological condition within six months of their infection.

"What you're doing is you're condemning a whole generation of adolescents to neurologic injury totally unnecessarily," Hotez said. "It's just absolutely heartbreaking and beyond frustrating for vaccine scientists like myself to see this happen."

Just as health experts predicted, the combination of unvaccinated people and the more contagious Delta strain of coronavirus has led to new Covid-19 surges.

In 31 states, new cases this past week are at least 50% higher than new cases the previous week.

Only two states — South Dakota and Iowa — are seeing decreases between 10% and 50%. The rates of new cases in Delaware and Arkansas are roughly the same as the previous week.

And younger people are getting hospitalized with Covid-19.

Missouri has one of the lowest vaccination rates in the country and one of the worst outbreaks of the Delta variant. The situation is so bad in Missouri that the United States deployed a surge team to help stop the spread — including members from the CDC and the Federal Emergency Management Agency.

"If they're sick enough to be admitted to the hospital, they are unvaccinated. That is the absolute common denominator amongst those patients," he said.

"Earlier in the pandemic, and certainly before we had vaccinations, we were seeing a much older patient population in the emergency department and getting admitted to the hospital," Jarvis said.

"In recent weeks, we've been seeing a much younger population," he said. "We're seeing a lot of people in their 30s, 40s, early 50s. We're seeing some teenagers and some pediatric patients as well."

In St. Louis County, officials said the rate of new cases jumped by 63% over the past two weeks.

"This variant is spreading quickly, and this variant has the ability to devastate those in its wake. And that is why it is so critical to get vaccinated now." 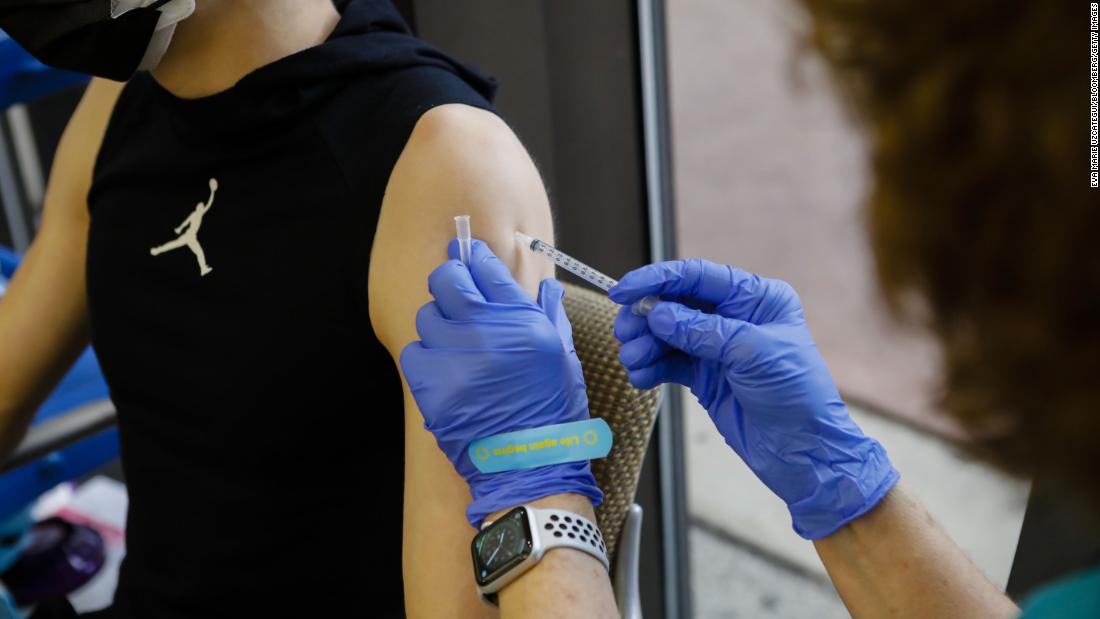 Children ages 12 to 15 became eligible to receive the Pfizer/BioNTech Covid-19 vaccine two months ago, but only a quarter of them are fully vaccinated, according to data published Tuesday by the US Centers for Disease Control and Prevention — less than any other age group.

Dr. William Schaffner, an infectious diseases professor at Vanderbilt University Medical Center, told CNN's Jake Tapper that the nation's focus should be making sure children get all the vaccines they need to.

"That's very, very important," he said. "You know, for many vaccines during the Covid enterprise, routine vaccinations dipped because children didn't go to their family doctors and their pediatricians. Now that they're all going back to school again this fall, we really need to keep vaccinating them to get them caught up.

"And that's with routine vaccines. And now we have Covid vaccine on top of that."

Schaffner said he hopes the US Food and Drug Administration "fully licenses" the Covid vaccines soon so the concern from some officials and parents about their authorization status can be alleviated.

It takes five weeks to be fully vaccinated with Pfizer's vaccine, the only one authorized for adolescents ages 12 to 17, so people will need to make a decision soon.