Covid-19 vaccine booster doses approved for some US adults

A New York judge has postponed the vaccination requirement mandate for the state’s court workers represented by the Civil Service Employees Association (CSEA) labor union because its implementation violated civil service law, according to court documents.

Prior to this court ruling, court workers were required to show proof of vaccination of at least one Covid-19 vaccine dose by Monday.

Judge Christina Ryba ordered Friday that there is “reasonable cause to believe that [the New York state’s court system’s] unilateral imposition of the mandatory vaccination requirement is an improper practice that violates Civil Service Law.”

CSEA argued that the statewide mandatory vaccine requirement constituted a new work rule that changed the terms and conditions of their employment and that the vaccine mandate was implemented without prior negotiation with the union, in violation of Civil Service Law.

Under the law, “a public employer is obligated to negotiate in good faith with the bargaining representative of its current employees regarding “terms and conditions of employment” and the failure to do so constitutes an improper employment practice,” Ryba wrote.

Ryba noted that while the law’s requirement for mandatory negotiations “may be circumvented where a clear legislative intent” is present, the New York court system failed to identify any statute that specifically permits the imposition of a vaccine mandate without prior union bargaining.

“Moreover, [the court system] has failed to produce any executive order or administrative regulation which would authorize the mandatory vaccination requirement it seeks to impose,” Ryba wrote.

Another hearing on the case is scheduled for Oct. 1 at 1 p,m. ET, court documents stated.

Three-quarters of the eligible population in the US has now received at least one dose of the Covid-19 vaccine, according to the latest data from the Centers for Disease Control and Prevention.

Roughly 55.1% of the total US population has been fully vaccinated against Covid-19; that represents approximately 183 million people.

Some more insight from the CDC:

CVS will begin administering an additional dose of Pfizer’s Covid-19 vaccine later in the day on Friday, a company spokesperson told CNN.

“We are reviewing the CDC guidance and will be ready to provide the booster dose at CVS Pharmacy and select MinuteClinic locations that offer the Pfizer/BioNTech vaccine later today,” Matt Blanchette, retail communications manager with CVS Pharmacy, told CNN in an email.

“We strongly encourage customers to schedule an appointment in advance at CVS.com to ensure they are able to access the correct vaccine at a convenient time and location," Blanchette added.

This comes after the CDC okayed the use of booster shots for people who got Pfizer vaccines at least six months ago and who are either 65 or older, or over 18 and with underlying conditions putting them at higher risk. She also added health care workers, first responders and others at high occupational risk of infection to the list.

Current recommendations for Covid-19 booster vaccines do not change the definition of who is fully vaccinated, US Centers for Disease Control and Prevention Director Dr. Rochelle Walensky said Friday

“We are not changing the definition right now of fully vaccinated. I think we need to have more experience with our third shot and have more people eligible and recommended to receive it before we change that definition,” Walensky said at a White House Covid-19 Response Team briefing.

The CDC currently defines fully vaccinated as being 14 days past a second dose of an mRNA Covid-19 vaccine – Pfizer’s or Moderna’s -– or 14 days past one dose of Johnson & Johnson’s vaccine.

Booster doses of Covid-19 will not be enough to end the Covid-19 pandemic, and the focus remains on vaccinating the unvaccinated, US Centers for Disease Control and Prevention Director Dr. Rochelle Walensky said Friday.

Walensky earlier okayed the use of booster shots for people who got Pfizer vaccines at least six months ago and who are either 65 or older, or over 18 and with underlying conditions putting them at higher risk. She also added health care workers, first responders and others at high occupational risk of infection to the list.

“While today's action was an initial step related to booster shots, it will not distract us from our most important focus: to get as many people as possible vaccinated with a primary series,” she said in a White House Covid-19 Response Team briefing.

“I want to be clear: we will not boost our way out of this pandemic," she said.

Walensky said as cases, hospitalizations, and deaths are increasing in unvaccinated areas, “the most vulnerable are those unvaccinated.”

“If you are not vaccinated and eligible, I encourage you to get vaccinated to protect your community, your family and yourself," she said.

The leaders of two major unions representing teachers, principals and school supervisors in New York City say they have major concerns about how schools will be both safe and properly staffed ahead of Mayor Bill de Blasio's vaccine mandate deadline Monday.

Both the United Federation of Teachers and Council of School Supervisors and Administrators are calling on de Blasio to delay the deadline, which is Monday at midnight.

That means about 10,000 New York City school teachers have yet to upload proof of their vaccination. If they do not, they risk losing their jobs — faced with the option of either taking a year of unpaid leave, or leaving with a severance package.

United Federation of Teachers President Michael Mulgrew and Council of School Supervisors and Administrators President Mark Cannizzaro said they both have no idea at this point just how bad things could be at each individual school, saying that information has not been shared openly by the NYC Board of Education.

“I've heard from several schools that have anywhere between 30 and 100 people currently on a non-compliant list,” Cannizzaro said.

Cannizzaro said that he’s heard urgent concerns from his members about what will unfold on Tuesday morning.

“The truth is, at this point, principals and superintendents have been reaching out consistently to tell us that they are concerned about not having enough staff come Tuesday morning September 28,” Cannizzaro said during a joint press conference with Mulgrew on Friday morning.

Cannizzaro and Mulgrew both said de Blasio’s optimism that enough people will get vaccinated by Monday night is not enough and have pushed for an actual plan of action.

“No one has reached out to find out exactly which schools are going to have an issue, and giving them additional support to make sure that the principal, the superintendent and everyone is comfortable that kids will be safe come Tuesday morning,” Cannizzaro said of the Department of Education

The department and de Blasio have said they are prepared for the Monday deadline with reserves prepared to deploy from pools of substitute teachers in the wings or other former teachers working in other areas. The Department of Education says it has a reserve pool of 11,000 substitute teachers.

CNN has reached out to the Mayor’s office and the NYC DOE for comment on the UFT and CSA remarks.

Health officials in the United States have said Covid-19 vaccine boosters can begin for older and higher-risk people there. But at least 15 countries around the world — most of them in Africa — have yet to give at least one vaccine dose to more than 3% of their population.

Among them are Nigeria, Africa's most populous nation with more than 200 million people, and Ethiopia with around 115 million people, as well as Haiti, only about 700 miles from the US state of Florida.
War-torn Yemen — where so far just 1.1% of the population has received at least one dose of a Covid-19 vaccine — was inoculating people at a rate of about 244 doses per day, according to the latest data compiled by Reuters.

The decision by the US Centers for Disease Control and Prevention means millions of Americans can receive booster shots of the Pfizer/BioNTech vaccine in the coming months.

But it goes against calls by the World Health Organization chief, Tedros Adhanom Ghebreyesus, for wealthy nations to refrain from boosting their Covid-19 vaccinations until at least the end of the year, to allow more supply to reach poorer nations.

Wealthier nations have been supplying Covid-19 vaccine doses bilaterally and through WHO's vaccine-sharing program COVAX, but donations have so far fallen short of what was pledged for this year.

At least 15 nations have yet to give at least one vaccine dose to more than 3% of their population, according to the latest figures compiled by Reuters. The proportion of people fully vaccinated in these nations is smaller still. 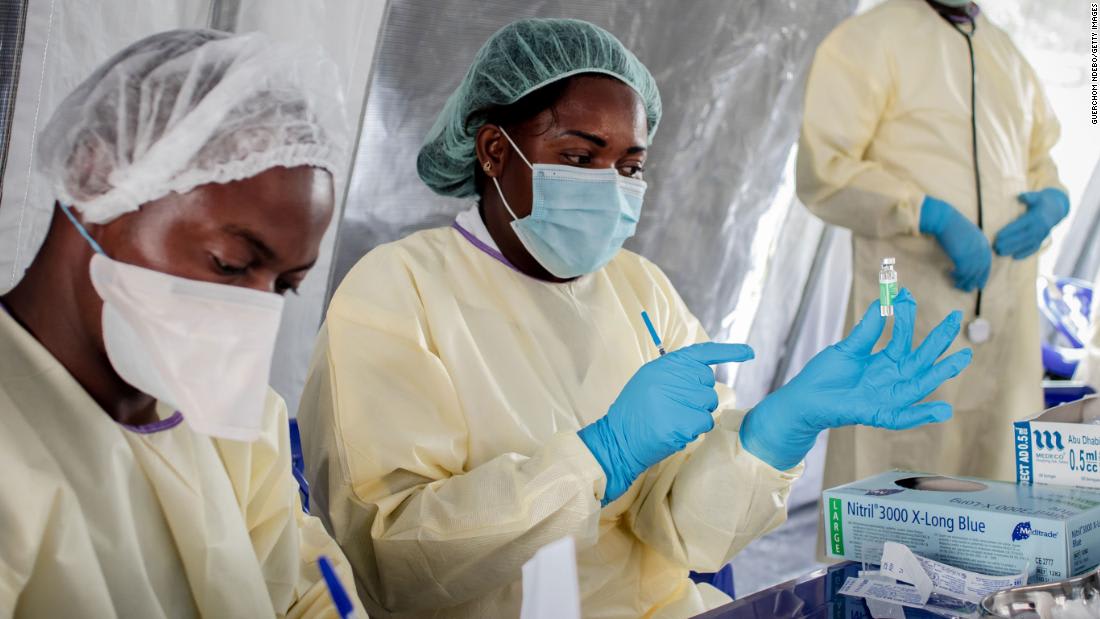 Booster doses just got approved in the US. At least 15 countries haven't vaccinated 3% of their people yet

President Biden advised Americans currently outside the eligible groups who might be looking to get Covid-19 booster shots to wait their turn.

While speaking about the pandemic and boosters at the White House, Biden said scientists and doctors are analyzing data on the potential for Moderna and Johnson & Johnson vaccines.

"We're also looking to the time when we're going to be able to expand the booster shots basically across the board. So I would just say it'd be better to wait your turn in line ... to get there," Biden said.

Right now, Pfizer booster shots are available to people 65 years of age and older, those with underlying medical conditions and frontline workers.

President Biden called on Americans who have become eligible for Pfizer’s Covid-19 booster shots to get a third shot “now,” and announced he would be getting one himself soon in remarks Friday.

“Hard to acknowledge I’m over 65, but I’ll be getting my booster shot,” Biden said.

He added that he was “not sure exactly when” that would happen but that he would get it “as soon as I can.”

His remarks come hours after US Centers for Disease Control and Prevention Director Dr. Rochelle Walensky diverged from the agency's independent vaccine advisers to recommend boosters for a broader group of people — those ages 18 to 64 who are at increased risk of Covid-19 because of their workplaces or institutional settings — in addition to adults 65 and older, long-term care facility residents and some people with underlying health conditions.