Trump said during his White House statement that he's "directing the Department of Justice to propose legislation ensuring that those who commit hate crimes and mass murders face the death penalty."

He added that capital punishment in these cases should be "delivered quickly, decisively, and without years of needless delay."

More context: Federal authorities are treating the El Paso mass shooting as a case of domestic terrorism, the US Attorney for the Western District of Texas said Sunday.

He identified the internet and social media as areas for reform.

“We have asked the FBI to identify all further resources they need to investigate and disrupt hate crimes and domestic terrorism.

Whatever they need. We must recognize that the internet has provided a dangerous avenue to radicalized disturbed minds and perform demented acts,” Trump said.

“We must shine a light on the dark recesses of the internet and stop mass murderers before they start,” he continued. 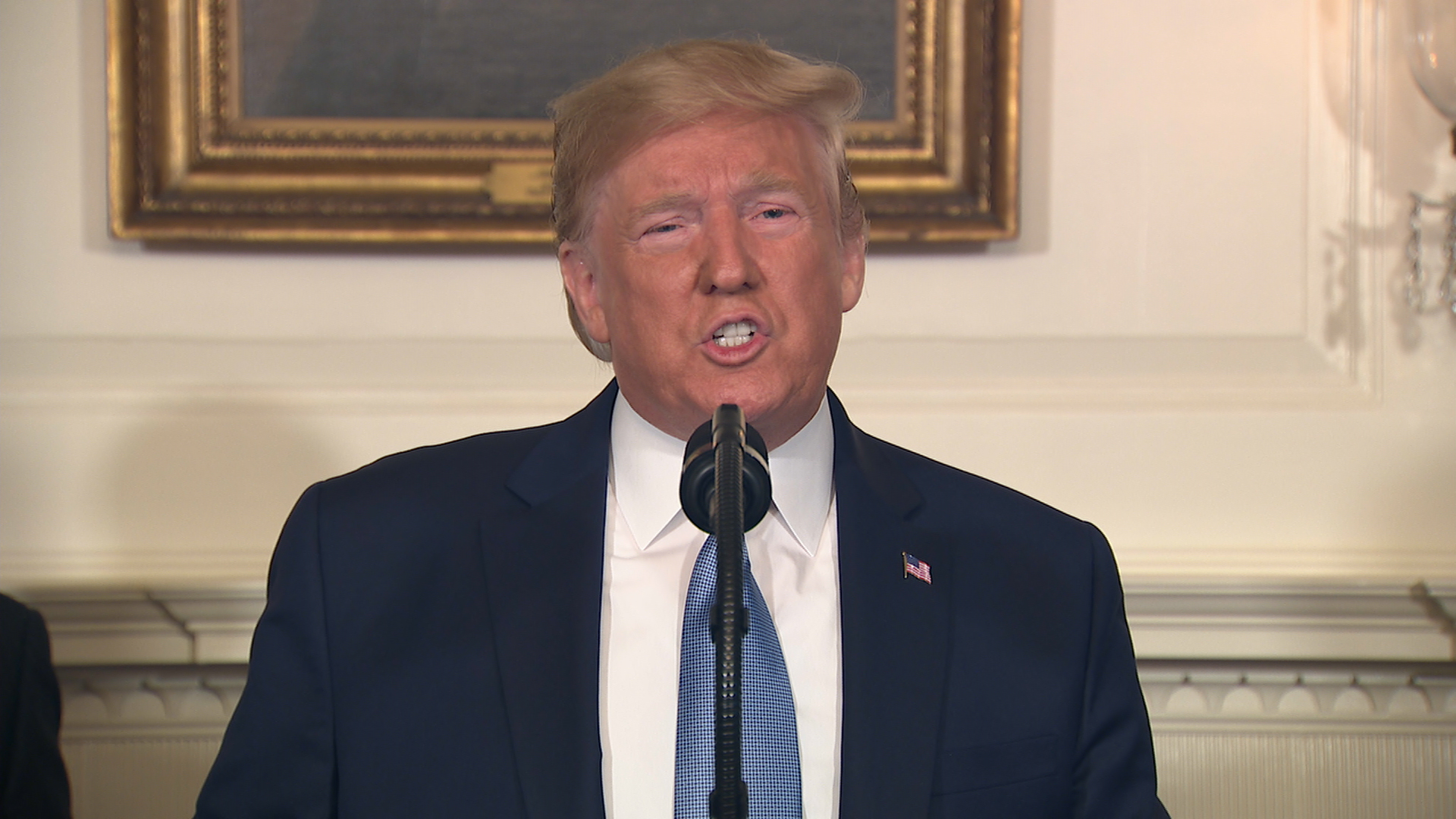 President Trump said video games that "celebrate violence" need to be addressed, while responding to two mass shootings that happened over the weekend.

He said "we must stop the glorification of violence in our society."

He continued: "This includes the gruesome and grisly video games that are now commonplace. It is too easy today for troubled youth to surround themselves with a culture that celebrates violence. We must stop or substantially reduce this and it has to begin immediately," Trump said.

House Minority Leader Kevin McCarthy said Sunday on Fox News, "But the idea of these video games that dehumanize individuals to have a game of shooting individuals and others -- I've always felt that is a problem for future generations and others."

Trump has done this before: After the mass shooting in Parkland, Florida, Trump signaled he believed violence in video games is partly to blame for real life violence and held a meeting between representatives from the video game industry and those who think games have made kids more violent in recent years.

In the wake of the mass shooting in El Paso, Texas, President Trump said the internet has "provided a dangerous avenue to radicalize disturbed minds and perform demented acts."

"We must shine light on the dark recesses of the internet and stop mass murders before they start."

He continued: "The internet, likewise, is used for human trafficking, illegal drug distribution and so many other heinous crimes. The perils of the internet and social media cannot be ignored and they will not be ignored."

Some background: Saturday's shooting in El Paso is at least the third atrocity this year where a suspect is believed to have posted to 8chan in advance of an attack.

8chan is an online messaging board that has been used by anonymous accounts to share extremist messages and cheer on mass shooters. It is rife with racist and anti-Semitic conspiracy theories.

Law enforcement officials in El Paso, Texas, confirmed on Saturday they were investigating a document posted on 8chan that they believe was written by Patrick Crusius, the shooting suspect. The four-page document posted online espouses white nationalist and racist views.

President Trump called the gunman who killed 20 people in El Paso Texas a "wicked man" and urged the country to condemn white supremacy. He stopped short of acknowledging his own divisive and racist rhetoric.

"The shooter in El Paso posted a manifesto online consumed by racist hate. In one voice, our nation must condemn racism, bigotry and white supremacy."

Mexico's president is responding to the mass shooting in El Paso that killed both US and Mexican citizens.

President Andrés Manuel López Obrador said it is very probable Mexico will make a legal complaint against the shooter.

“I’ll just say this, to liberate ourselves, to balance ourselves, we want a respectful relationship with the US government and to say that we lament the loss of human lives in that country. It hurts about our dead, but it also hurts the loss of lives of other nationalities,” López Obrador said in a Monday press conference.

López Obrador said going forward, the country will continue to vouch for stricter gun laws in the US, while also saying they will not interfere with the country's affairs.

“We are very respectful of other countries decisions, but we think that this unfortunate event that are presented in the US, should be reflected on and analyzed in the decision to control the unvetted selling of gun. I say this will all respect,” he continued. “It is not our intention to put ourselves in the external life of any country. But they should rethink this matter, because it affects a lot."
He continued: "That does not happen in our country. As well, in a very respectful matter, we could send information about our legislation and the proceedings that we follow on this matter to help, cooperate, in everything we can.”

Some background: At least 20 people were killed and 26 more were injured on Saturday in a shooting at an El Paso Walmart. Federal authorities are treating the mass shooting as a case of domestic terrorism, the US Attorney for the Western District of Texas said Sunday.

Police say a racist, anti-immigrant document they believe was written by the 21-year-old white male suspect has a "nexus to a potential hate crime."

President Trump is expected to present preliminary policy ideas in his statement at 10 a.m. ET, according to a White House official.

Trump will read from prepared remarks from a Teleprompter that will last for several minutes, the official said.

The official said the two back-to-back shootings have felt like a "blow" to the White House given the magnitude of the tragedies, and everyone is taking this very seriously.

But the official downplayed the prospect of Trump toning down his rhetoric going forward, saying administration aides were surprised Democrats singled out the President's past language.

The bar, in the nightlife district of Dayton, Ohio, near where a mass shooting took place Sunday, is reopening today.

A sign on the front door of Ned Peppers said it will open at normal time on Monday –– which is 11:00 a.m. ET, according to the bar's website. The sign also featured the message #DAYTONSTRONG.

After the shooter opened fire, he began walking in the direction of Ned Peppers when police responded. Nine people were killed. 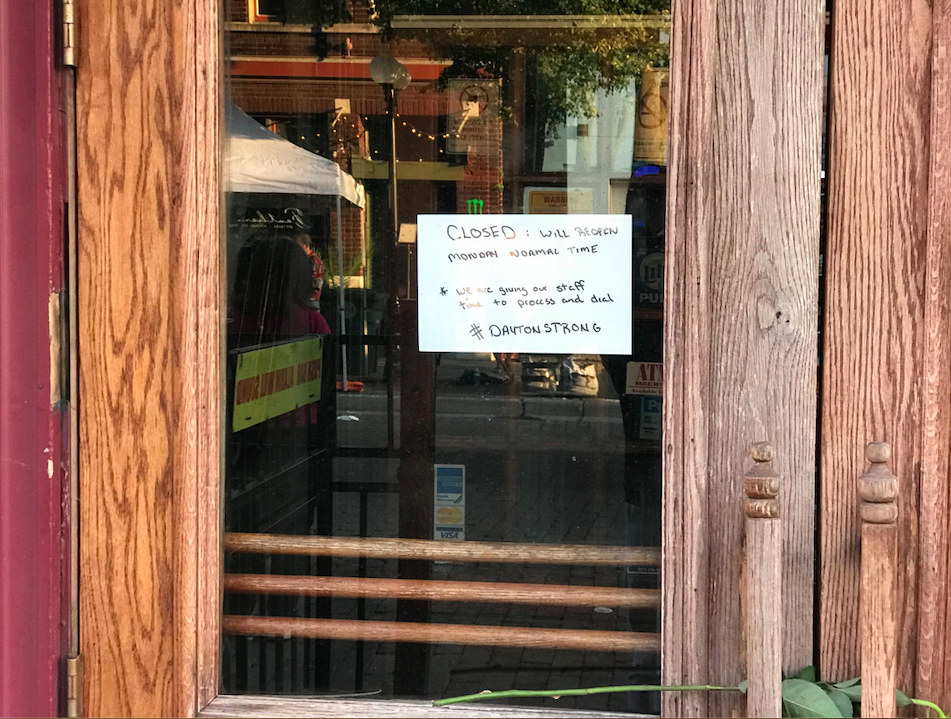 Dayton Mayor Nan Whaley spoke to CNN on Monday morning as the community of Dayton begins to heal.

"I think our community is still in a state of shock, and sadness frankly," Whaley said.

Whaley was asked what she wants to hear from lawmakers both in Ohio and in DC.

"My job as mayor is to take care of my community, to bring my community together and make sure it has what it needs. What I want from Columbus and Washington DC, I want them to do their jobs as well. I don't think, and I've talked to our police officers here, this shooter had a gun that he got legally with magazines he got legally. I really don't understand why a gun of that magnitude is really needed on the streets of Fifth Street. You know, a gun that can kill nine people and injure 26 more in the course of 24 seconds while our officers have handguns and shotgun rifles to go back at it, " Whaley said.

"I think it begs the question, what are we doing," Whaley said.