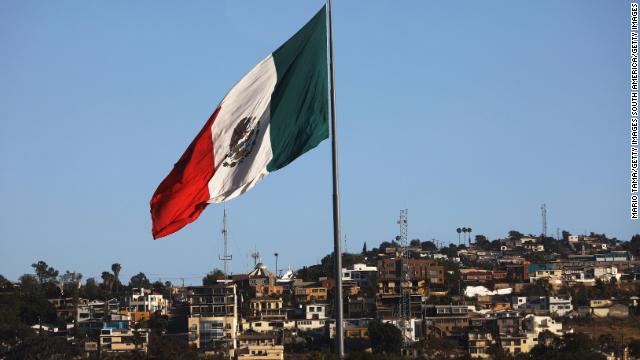 The Mexican government will take legal action against the US after six Mexican nationals were killed in the shooting in El Paso, the country’s foreign secretary Marcelo Ebrard announced on Sunday.

Ebrard did not specify exactly what the legal action will be, but said that more details would be announced at 5:30 p.m. ET.

“Mexico would like to express its utmost, profound condemnation and rejection of this barbaric act,” he said.

Six Mexicans were killed and seven are injured after the shooting, according to Mexican President Andrés Manuel López Obrador. 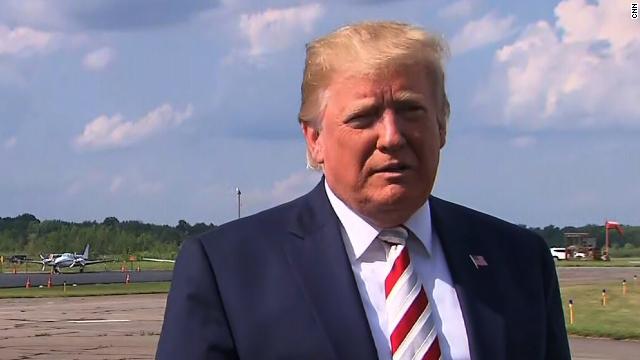 Asked what he was going to do to address gun violence, President Donald Trump told reporters on Sunday that “a lot of things are in the works,” and said that his administration has done “much more than most administrations.”

“We’ve done actually a lot but perhaps more has to be done,” he said.

The President was speaking on a tarmac in New Jersey after a weekend spent at his golf club.

The President oversaw a ban on so-called "bump stocks," but his administration has not pursued large-scale gun control efforts. His predecessor, Barack Obama, took dozens of executive actions on gun control, including on background checks and mental health.

Trump also said on Sunday that this is a “mental illness” problem, while ignoring other questions on the topic, including one on white nationalism.

In addition, he praised law enforcement and said the massacres could have been worse.

The President said that he would address the two shootings in a statement around 10 a.m. ET on Monday.

“I’ll be making a statement tomorrow, sometime, but just on behalf of our First Lady and myself, condolences to all. We have to get it stopped. This has been going on for years," he said. 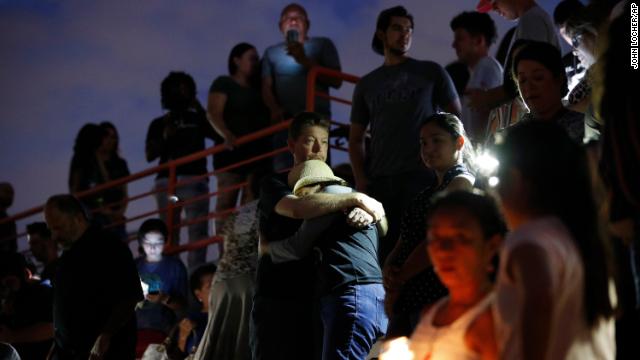 CNN affiliate KFOX-TV has compiled a list of vigils happening around El Paso on Sunday for the victims of the shooting. Note that all times are local.

Six Mexican nationals were killed in the El Paso shooting on Saturday, according to Mexican President Andrés Manuel López Obrador.

Previously, three Mexicans were confirmed to have died in the shooting.

Seven other Mexicans are injured, he announced in a televised statement on Sunday. He offered “solidarity to the victims’ families.”

Here's what we know so far about those who were injured: 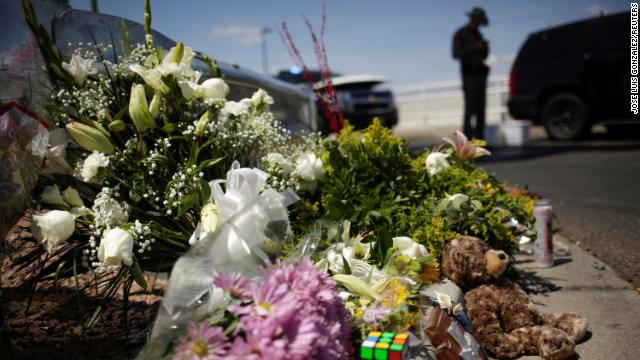 Adria Gonzalez, a 37-year-old assistant teacher at a school in Fort Bliss, says she was grocery shopping with her mother at Walmart on Saturday. They were walking by the meat section when they heard at least three gunshots.

"They didn't sound like gunshots, it sounded more like something fell to the floor," Gonzalez told CNN.

As Gonzalez stepped up to see what was happening, she says she saw the shooter near the store's main entrance. She describes recalling the shooter was was wearing headphones or ear muffs, and he had a big gun.

Gonzalez says she saw a grade-school aged boy get shot in the leg, a man bleeding on the floor, and another man covered in blood trying to reach a child nearby.

Gonzalez says she pulled her mother by the blouse and walked toward a storage room in the back by the cold cuts section. She took off her cap and started waving it to signal to others inside the store. Gonzalez recalls about 40 people followed her, saying, "I could only think about getting my mom and others out of the store."

For about 10 minutes, they waited inside the storage area until they could no longer hear gunshots. When they exited the store, people were running off and Walmart employees were trying to get people out of the area in their cars.

Gonzalez and her mom had to get a ride elsewhere to get out because they couldn't get closer to the parking lot. Their car is still at the Walmart because police have the area blocked.

She says she can still see the boy getting injured, and she wonders how he's doing. She's also thinking about a woman who she tried to help get out and couldn't. Gonzalez hopes she is fine and wishes she could find whether she made it out safe.

"You see this happening in the movies but when you live it yourself, when you see a person killing, the blood everywhere, you are in shock," Gonzalez says. 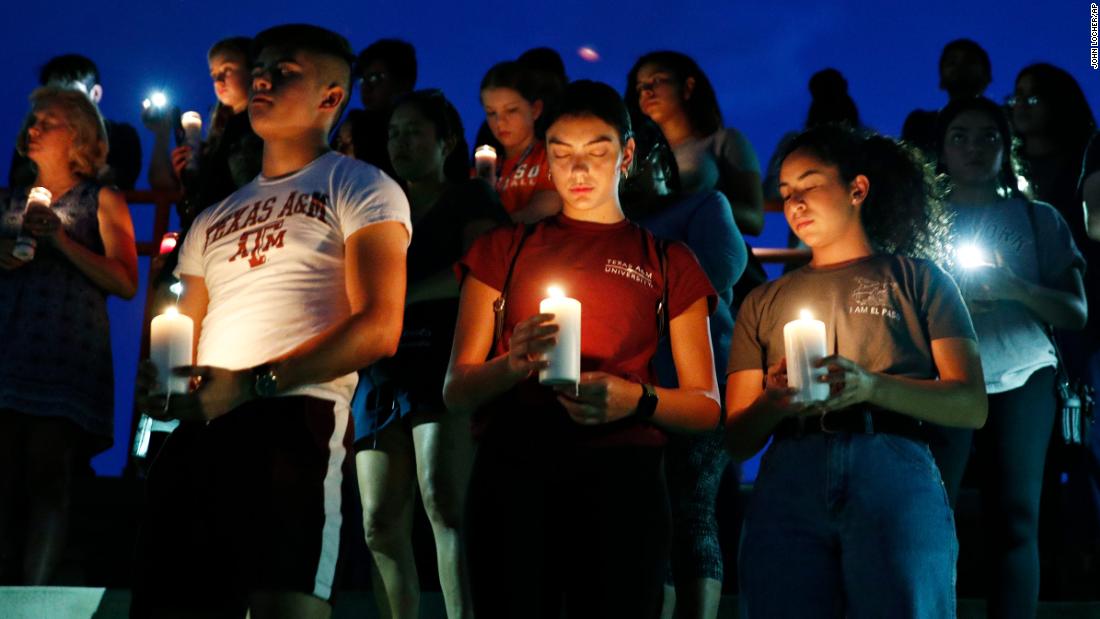 As communities in El Paso come to terms with the aftermath of the shooting, civic groups are mobilizing to help those affected cover medical, funeral and other costs.

You can support the people affected by this tragedy by going to this site.

Donations will go to the El Paso Community Foundation and the Paso del Norte Foundation, who are both nonprofit organizations assisting victims in El Paso.

CNN's Impact Your World will update this article as opportunities to help the Dayton community arise.

Federal authorities are treating the El Paso shooting as domestic terrorism, and the Justice Department is "seriously considering" bringing federal hate crime and federal firearm charges against the suspect.

CNN's Mallory Simon, who covers racism and hate in America, writes that these decisions are a significant step, but they're not enough to stop such attacks:

With officials in El Paso, Texas, making the decision to label the attack “domestic terrorism,” they have done something so few have done in recent attacks -- call mass murders of people targeted for their race, religion or simply for not being "pure" white as the terrorism it is.

Suspects in recent attacks are followers of a vile and hateful ideology that meets the FBI definition of terrorism, and many of their writings clearly depict their hatred. But some top current and former law enforcement officials say that they are not treated as terrorists, because they are American and they are white.

Today, it appears officials are making a decision to call these attacks the terrorism they are – and maybe that is a first step towards fixing this rising tide of hate. But it cannot alone stop or solve it.

Experts studying hate say authorities seem to be stuck on how to balance tackling hate on internet forums with First Amendment rights of freedom of speech.

This isn't the first time a suspect has written a "manifesto" on, or in reference to, 8chan. It's an issue that has seemed to stump Congress, too. In hearings earlier this year, intelligence officials were asked about what guidance they could offer on the online forum to guide legislation. They had no answer.

Today’s language around calling this a domestic terror attack is a start – acknowledging that this kind of hateful language and action cannot be tolerated and treated as normal anymore. But often, it's not enough to deter these attackers, as some in past attacks have killed themselves before they are captured for their actions.

CNN's Nicole Chavez is on the ground in El Paso talking to people who were inside the Walmart where a gunman opened fire, and those who are visiting the site to honor victims.

Tomas Rojas is a 62-year-old custodian at MacArthur Elementary School in El Paso. He said he was inside Walmart paying for a prescription when the shooter walked in. Rojas said he applied a tourniquet to a woman who was shot in the arm, and waited with her for about 30 minutes.

Outside the store, members of the community are coming out to honor those who lost their lives. Alfredo Angcayan, a 62-year-old veteran who lives in Central El Paso, came to leave flowers at the Walmart. He said he had to support his community.

The photo below shows just how close people can get to the scene right now.

In addition to the community members coming to pay tribute, those who were inside the Walmart during the shooting are now returning to retrieve their vehicles.

After the shooting in El Paso, Texas, the Southern Poverty Law Center denounced President Trump's "racially-driven rhetoric," and said that his policies, appointments, and rhetoric were "making America a more dangerous place for all of us."

“By describing immigrants in derogatory terms, President Trump is pushing anti-immigrant hate into the mainstream," Heidi Beirich, the director of SPLC's Intelligence Project, said in a statement. "Trump has broken the bounds of decency, and his rhetoric and tweets are normalizing anti-immigrant sentiments and fueling white supremacist conspiracy theories that engender violence."

“As we head into another election cycle, Trump shows no signs of stopping and is, in fact, doubling down on his efforts to turn the country into an increasingly unwelcome environment for anyone who isn’t white," the statement continued. "To pretend that his administration and the hateful rhetoric it spreads doesn’t play a role in the kind of violence that we saw yesterday in El Paso is ignorant at best and irresponsible at worst."