Tropical Storm Elsa continues to weaken as it moves across southern Georgia.

Maximum winds have decreased to 45 mph, according to the 5 p.m. EDT advisory from the National Hurricane Center.

Elsa should weaken to a tropical depression on Thursday as it moves through the Carolinas, but additional tropical storm watches have been issued for the Northeast as the storm may slightly intensify on Friday.

New tropical storm watches include Long Island from East Rockaway Inlet to the eastern tip along the south shore and from Port Jefferson Harbor to the eastern tip along the north shore. A tropical storm watch has also been issued for the coast of southern New England from New Haven, Connecticut to Sagamore Beach, Massachusetts, including Cape Cod, Block Island, Martha’s Vineyard, and Nantucket.

A tropical storm watch or warning covers much of the eastern seaboard, stretching from Georgia to Massachusetts. 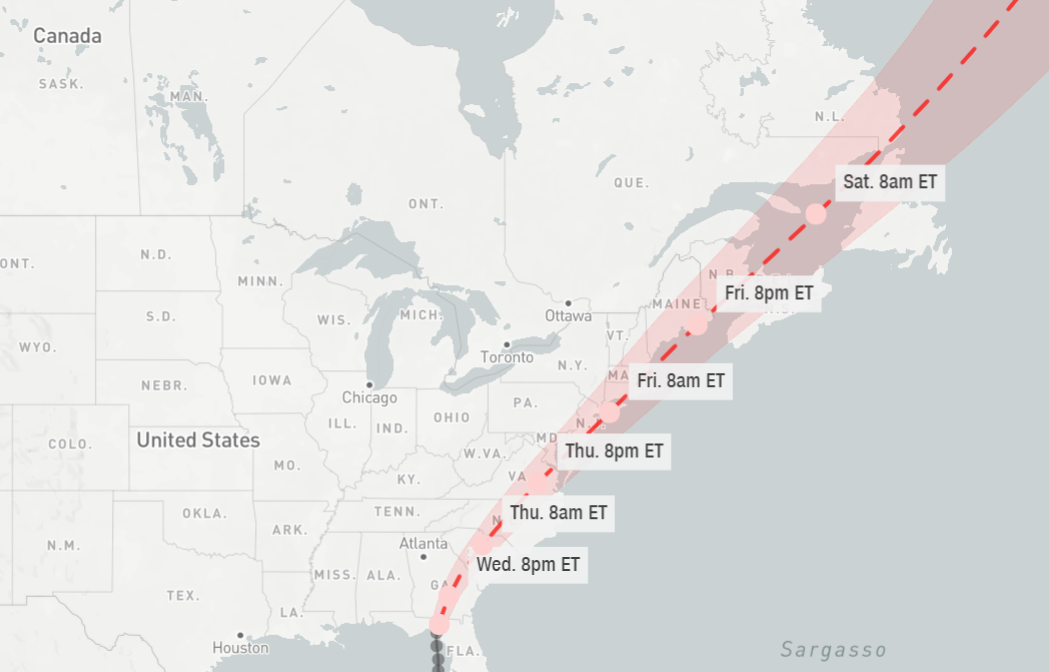 Tropical Storm Elsa has moved across Florida, leaving more than 25,000 customers without power. The storm is now heading toward Georgia and the Carolinas before inching up the mid-Atlantic coast.

Meteorologists have predicted the storm will move from Georgia to Maine within the next two days, as either a tropical storm and a tropical depression. However, the storm's path remains unpredictable and may vary as Elsa progresses up the coast.

Here's a break down of the storm's expected path, according to the National Hurricane Center's latest forecast:

Tropical Storm Elsa is heading toward Georgia, where it may maintain tropical storm strength into this evening, forecasters said.

However, the storm may weaken to a tropical depression by tomorrow morning, when it is due to be over South Carolina.

In southeastern Georgia and the lowlands of South Carolina, the hurricane center predicts about two to six inches of rain.

Tropical Storm Elsa will eventually skirt along the mid-Atlantic coast, with a potential to restrengthen into a tropical storm in the Northeast by Friday morning, according to the hurricane center. An estimated one to five inches of rain are possible in coastal portions of North Carolina and southeastern Virginia through Thursday night.

There are more than 25,000 customers without power in the state of Florida, according to PowerOutage.us.

The storm is now pushing inland and slowly weakening, but is expected to remain a tropical storm as it moves up the eastern seaboard over the next several days.

Elsa is now "inland and weakening over Northern Florida," the National Hurricane Center said in its 2 p.m. ET update.

The storm has maximum sustained winds of 50 mph as it continues to crawl across the state. All warnings have been discontinued south of the Suwannee River, the National Hurricane Center said.

Here's a look at the latest path: 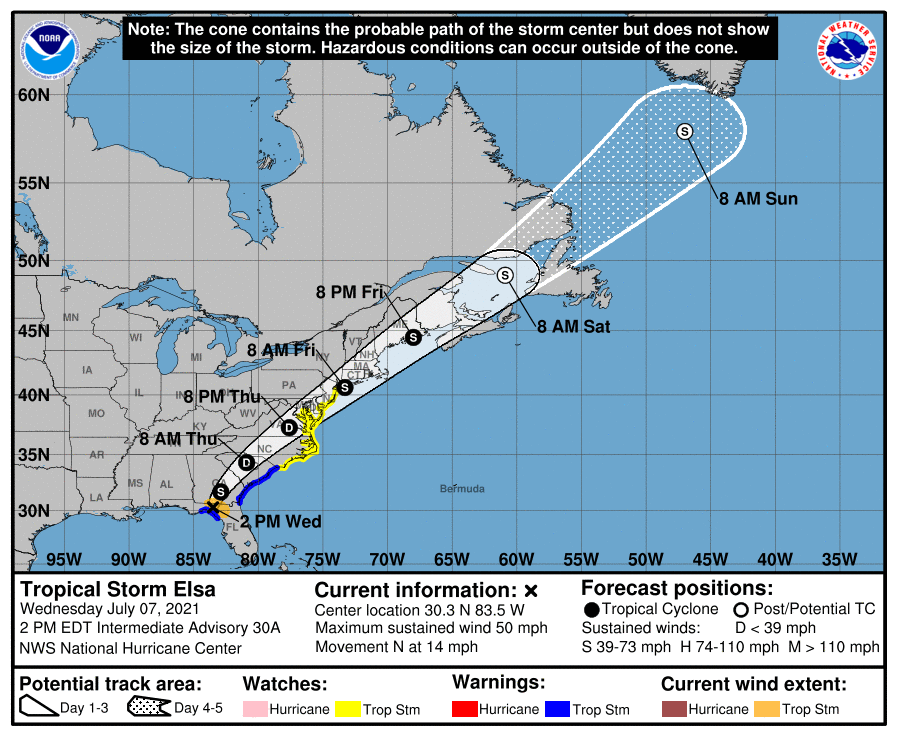 It was a night of heavy rains and high winds for people on the Florida coast as Tropical Storm Elsa approached the area. Johnathan Riches of Tampa shot these videos on Wednesday in Cedar Key, Florida, hours before the storm made landfall today.

Riches told CNN that the worst of the storm seemed to happen between 6 and 8:30 a.m. ET.

“Never seen anything like this before in my life. Winds starting howling in the middle of the night and rain starting pounding the windows. so I got out to film and document,” Riches told CNN.

He also posted photo of damage to the roof of the Beach Front Motel, where he is staying.

Speaking at a press conference in Surfside, Nuñez said the storm is currently impacting Taylor County.

“We are obviously continuing to monitor how this storm will track across northwest Florida, “ Nuñez Said.

Nuñez said the storm will likely head into the Carolinas later today through Thursday.

Jacksonville Mayor Lenny Curry said there is the possibility of flooding and power outages as Tropical Storm Elsa moves north into Florida, especially since there's been "significant rain over the past week" in his area.

Even though it's "not a hurricane with a direct hit, we don't want people to get overconfident, be out in their cars and potentially driving into flooding. You can have downed power lines with wind. There's a whole lot of possibilities that can happen in these storms," Curry said to CNN's Boris Sanchez.

The mayor also said the tropical storm is a signal for residents to get ready now for hurricane season.

"This is an opportunity to remind ourselves early in the season that you need to know your evacuation zone. You need to have your hurricane kits, your storm kits prepared. If you don't have it ready ... if you don't know your zone, get ready," Curry said.

Tropical Storm Elsa is making landfall in Florida in Taylor County, according to the National Hurricane Center.

Maximum sustained winds remain at 65 mph, with higher gusts. The storm will now push inland and slowly weaken, but it is expected to remain a tropical storm as it moves up the eastern seaboard over the next several days.