Flights delayed across the US after FAA system outage

Our live coverage has ended. Follow the latest news here or read through the updates below.

Approximately 10,103 flights within, into or out of the United States have been delayed and 1,343 have been canceled as of 9:20 p.m. ET Wednesday, according to the flight-tracking website FlightAware.

The Federal Aviation Administration said Wednesday night it is "working diligently to further pinpoint the causes of this issue" behind the widespread cancellations and delays.

A government official familiar with the investigation into the Notice to Air Missions (NOTAM) system outage told CNN the Federal Aviation Administration (FAA) is still trying to determine who is responsible for the corrupted file identified in the probe first reported by CNN. The NOTAM outage grounded flights across the US.

The official said they aren’t sure the nature of how that corruption happened, whether it was a “routine entry” or one that was coded wrong.

In a new statement Wednesday night, the FAA acknowledged there was a “damaged database file.” The agency says the investigation is ongoing.

"The FAA is continuing a thorough review to determine the root cause of the Notice to Air Missions (NOTAM) system outage. Our preliminary work has traced the outage to a damaged database file. At this time, there is no evidence of a cyberattack. The FAA is working diligently to further pinpoint the causes of this issue and take all needed steps to prevent this kind of disruption from happening again," the statement read.

CNN first reported the FAA attempted to reboot the NOTAM system early Wednesday morning. When the corrupted files were discovered in both the main system and a backup system, the agency decided it needed to ground flights throughout the country until the situation could be resolved.

As of 5 p.m. Wednesday, at least 9,207 flights within, into or from the US have been delayed and 1,309 were canceled, according to the flight-tracking site FlightAware.

It comes more than eight hours after the Federal Administration Aviation lifted a ground stop it issued in response to an outage of its Notice to Air Missions system.

When air traffic control officials realized they had a computer issue late Tuesday, they came up with a plan: Reboot the system when it would least disrupt air travel Wednesday morning.

Ultimately, that plan and the outage led to massive flight delays and an unprecedented order to stop all aircraft departures nationwide, a source familiar with the Federal Aviation Administration operation told CNN.

Officials ultimately found a corrupt file in the main Notice to Air Missions, or NOTAM, the source said. A corrupt file was also found in the backup system. The NOTAM is a critical and enormous safety computer system that advises pilots of issues along their route and at their destination. It has a backup, which officials switched to when problems with the main system emerged, according to the source.

In the overnight hours of Tuesday into Wednesday, FAA officials decided to shut down and reboot the main NOTAM system – a significant decision, because the reboot can take about 90 minutes, according to the source.

They decided to perform the reboot early Wednesday before air traffic began flying on the East Coast in order to minimize disruption to flights.

“They thought they’d be ahead of the rush,” the source said.

During this process, the FAA told reporters that the system was "beginning to come back online," but said it would take time to resolve.

The system, according to the source, “did come back up, but it wasn’t completely pushing out the pertinent information that it needed for safe flight, and it appeared it was taking longer to do that.”

That’s when the FAA issued a nationwide ground stop at around 7:30 a.m. ET, halting all domestic departures. Aircraft in line for takeoff were held before entering runways. Flights already in the air were advised verbally of the safety notices by air traffic controllers, who keep a static electronic or paper record at their desks of the active notices.

Transportation Secretary Pete Buttigieg ordered an after-action review and said that there was “no direct evidence or indication” that the issue was a cyberattack.

The source said the NOTAMS system is an example of aging infrastructure due for an overhaul.

“Because of budgetary concerns and flexibility of budget, this tech refresh has been pushed off,” the source said. “I assume now they’re going to actually find money to do it.”

“The FAA’s infrastructure is a lot more than just brick and mortar.”

Flight impacts. As of Wednesday afternoon, 8,609 flights within, into or out of the United States were delayed and 1,251 were canceled, according to the flight-tracking website FlightAware. Travelers have reported waiting in airports for hours as airports urge passengers to check with their airlines about flight interruptions.

Ground stop lifted. The FAA lifted its ground stop Wednesday morning and said "normal air traffic operations are resuming gradually across the U.S." Transportation Secretary Pete Buttigieg said the dramatic nationwide ground stop of departing flights was out of an "abundance of caution."

Calls for reform. Buttigieg told CNN Wednesday a key question officials need to look into is whether or not the system outage is an indication that the FAA's system is outdated. He said he welcomed the attention from Congress, especially because the US is nearing the time period when it needs to renew funding for the FAA.

And following the system outage, Sen. Ted Cruz called for congressional reforms to the FAA, which has been operating without a permanent leader since March. Meanwhile, Democratic Sen. Maria Cantwell, who chairs the Senate Committee on Commerce, Science and Transportation, said the panel will look into the causes behind the outage.

Cancellation comparison. Southwest, which canceled tens of thousands of flights after Christmas following a systemwide meltdown, was hit hard on Wednesday by the system outage with 377 canceled flights. But American Airlines was hit even harder by one measure: Including feeder airlines that use regional jets, American said it has canceled nearly 400 flights as of midday Wednesday. 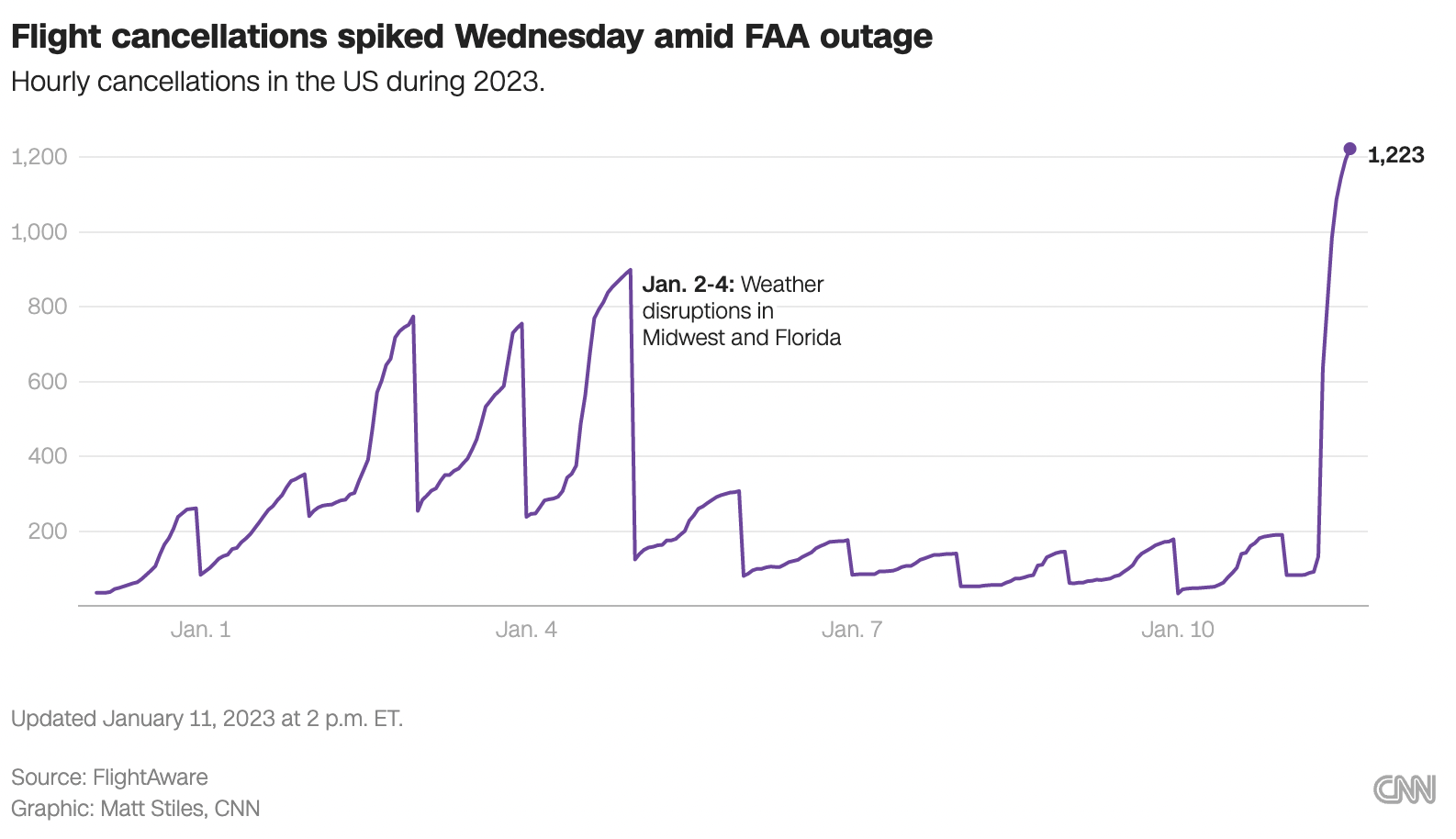 It’s the second time in less than a month that frequent flyer Erin Potrzebowski has had her Southwest flight scraped as part of mass flight cancellations impacting the entire country, she told CNN.

Potrzebowski was one of the many travelers who had a Southwest flight canceled in late December. She was scheduled to catch a Southwest flight from New Orleans to Chicago on Dec. 29 but was told the flight was canceled a day prior. In hopes of traveling back home for New Year’s, she booked a direct flight with American Airlines for an additional $400. She is still waiting to see if she will be reimbursed by Southwest.

Now, less than a month later, Potrzebowski is once again dealing with mass flight cancellations. On Wednesday, her Southwest flight from Chicago to New Orleans was canceled due to an FAA outage that impacted flights across the country.

Potrzebowski arrived at the Chicago Midway Airport around 6 a.m. and must wait till 6 p.m. to board her rescheduled Southwest flight, she said.

Delays and cancellations at airports across the US are still climbing following an outage in the Federal Administration Aviation's Notice to Air Missions system.

So far, 8,116 flights within, into or from the US have been delayed on Wednesday, and 1,213 flights were canceled, according to the flight-tracking site FlightAware.

Airports have been advising travelers to check with their airlines to see their latest flight status.

Southwest, which canceled tens of thousands of flights after Christmas following a systemwide meltdown, was hit hard on Wednesday after a Federal Aviation Administration system outage, with 377 canceled flights.

The airline said mid-morning Wednesday that operations have resumed.

American Airlines was hit even harder by one measure: Including feeder airlines that use regional jets, American said it has canceled nearly 400 flights as of midday Wednesday.

While the Wednesday's flight cancellations at Southwest are a problem for its customers, it was nowhere near as bad as what it experienced from Dec. 21 through Dec. 29, when more than 16,700 flights, or nearly half of its scheduled, had to be canceled due to lack of available staff.

There is no evidence yet that Wednesday’s air travel technology meltdown resulted from a cyberattack, Transportation Secretary Pete Buttigieg said, but he added that he also wouldn’t rule it out.

“There’s been no direct evidence or indication of that, but we are also not going rule that out until we have a clear and better understanding of what’s taken place,” Buttigieg said in an interview with CNN.

Buttigieg, who has been hard on airlines over their staffing and technology issues in the last year, said the Transportation Department and Federal Aviation Administration would “own” responsibility for their failures.

He said the dramatic nationwide ground stop of departing flights was out of an “abundance of caution.”

The “FAA will always act to make sure that passengers are safe,” he said. “Part of what you saw this morning was an act of caution to be sure – until it was 100% airtight that the system was working properly even just delivering messages – that we had that ground stop,” he said.