K-pop behemoths BTS and their fans have donated $2 million to the Black Lives Matter movement, according to the band's label and their fan fundraising group.

"We stand against racial discrimination. We condemn violence, You, I and we all have the right to be respected. We will stand together. #BlackLivesMatter"

In response, BTS fan-based charity fundraising group "One In An ARMY" launched a campaign to raise funds in support of the Black Lives Matter movement, which raised $50,000 in four and a half days.

The campaign then turned into a drive to #MatchAMillion, after reports the band had donated $1 million emerged on Saturday.

The band's label, Big Hit Entertainment, confirmed to CNN that BTS had donated $1 million to a campaign group.

In the first 24 hours of the #MatchAMillion campaign, the fan group raised more than $817,000, according to a press release that One In An ARMY posted on its Twitter account.

Shortly after, on Sunday evening ET, the fundraiser updated via Twitter that they had reached their $1 million goal.

The additional $1 million was donated to bailouts for those arrested for protesting police brutality, black-led advocacy organizations fighting systemic injustice and support for the physical and mental health of the black community, the statement said.

Health officials have raised concern about the spread of coronavirus, as thousands of people braving the pandemic to participate in national protests sparked by the death of George Floyd.

The US Centers for Disease Control and Prevention (CDC) said Sunday it was closely monitoring the demonstrations taking place across the US and warned that such gatherings could spur coronavirus transmission. Some states are already seeing upward trends of new cases.

For three months, the country passed one grim milestone after the other, hitting 100,000 coronavirus deaths in late May. Public health officials have said that without the lockdowns most states put in place, the death toll could have been significantly higher.

As those lockdowns were lifted and other measures were loosened, the CDC and other top health officials urged Americans to use face coverings when they go out and always maintain a distance from other people.

But large protests make it hard to keep to the recommended social distancing guidelines and "may put others at risk," CDC spokesperson Kristen Nordlund said in a statement.

"It is too early to know what, if any, effect these events will have on the federal Covid-19 response. Every local situation is different. State and local officials will make decisions to protect public health and safety based on circumstances on the ground," she said.

Earlier this month, CDC Director Dr. Robert Redfield said protesters should be evaluated and tested for the virus.

"I do think there is a potential, unfortunately, for this to be a seeding event," he said -- especially in metropolitan areas where there has been significant transmission. 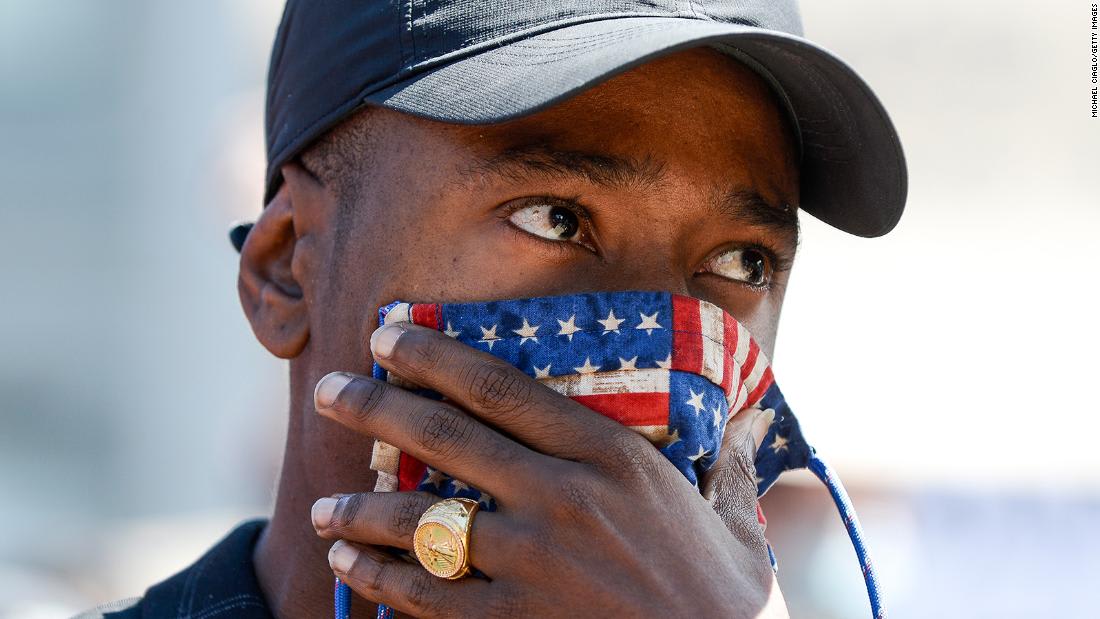 Pompeo is still telling lies and keeps slandering other people," said Hua Chunying, a spokesperson for China's Ministry of Foreign Affairs on Monday.

She added that "US society still suffers from systematic discrimination, this is not outside propaganda, but is a normal state in the US which has been called out by many people."

Hua said "equal rights for minorities remain elusive [in the US]" and "US politicians trying to shift the blame is immoral and unhelpful."

Hua's comments come after Pompeo released a statement on Saturday accusing China of exploiting the "tragic death of George Floyd to justify its authoritarian denial of basic human dignity." Pompeo said China's propaganda efforts "should be seen for the fraud they are."

French President Emmanuel Macron has asked the country's interior minister to look into police violence with a view to improving "the ethics of the police," according to a government statement.

After last week's protests, Macron met the prime minister, the interior minister and other officials over the weekend, the Elysée Palace said in a statement early Monday morning.

"The president has asked the minister of interior to quickly complete the work, begun last January, which consisted in making proposals to improve the ethics of the police," the release added.

There was a 41% increase in internal investigations into police violence between 2018 and 2019, according to a report released on Sunday by the police force's internal watchdog.

On Tuesday last week, more than 20,000 protesters gathered in front of the main Paris court demanding an end to police violence, and in support of the Black Lives Matter movement in the US following the death in custody of George Floyd.

The organizers of the protests also demanded justice for Adama Traoré, a 24-year-old black French man who died in police custody in Paris four years ago.

Several protests against racism and police violence have taken place all over France in recent days, including three in Paris on Saturday.

All of the demonstrations went ahead in defiance of French authorities, since measures banning gatherings of more than 10 people are in place to prevent the spread of Covid-19.

A picture of George Floyd has appeared in the Palestinian city of Bethlehem on the concrete wall built by Israel that separates it from the West Bank.

Since it went up almost 20 years ago, a response to the violence of the second intifada, or armed uprising, the wall has become one of the world’s most famous canvases for political graffiti.

The wall's latest addition shows George Floyd wearing a hooded top, colored blue, staring out to meet the viewer’s gaze -- a version of one of the most widely circulated images of him, a photo taken against a brick wall.

What else is on the wall? Other depictions to appear in recent years in Bethlehem include Donald Trump with his hand against the Western Wall in Jerusalem, with the speech bubble, "I'm going to build you a brother," a reference to his campaign promise to erect a wall on the US’s southern border with Mexico.

There is also a large mural of Ahed Tamimi, the Palestinian teenager who has become a face of resistance to occupation. Tamimi was given an eight-month prison sentence after she was filmed kicking and slapping an Israeli soldier at the entrance to her family’s house.

The wall is also a popular site for sloganeering. "Make hummus not walls," reads one message.

In the UK city of Bristol, protesters on Sunday pulled down a statue of a 17th-century slave trader while demonstrating in solidarity with the Black Lives Matter movement.

The demonstrators tied the 5.5-meter (18ft) bronze statue of Edward Colston, with rope before toppling it, to cheers from the surrounding crowd.

Activists were later seen rolling the statue to the nearby harbor and throwing it into the River Avon.

Colston, who was born in Bristol in 1636, was an active member of the governing body of the Royal African Company (RAC) for 11 years, assuming the top role of deputy-governor from 1689–90.

The company, which had a monopoly on the west African slave trade in the late 17th century, was involved in the selling of tens of thousands of west African people in the Caribbean and the Americas.

Colston, who is described by the Museums of Bristol website as a "revered philanthropist / reviled slave trader," later donated some of his wealth to charitable causes, such as schools and hospitals, a process through which his name became synonymous with certain Bristol landmarks.

The statue of Colston had stood in Bristol's city center since 1895 but had become increasingly controversial, with petitions created to demand its removal.

Elsewhere in the UK: Massive protests, with people numbering in the thousands, also took place in other major UK cities like London and Edinburgh.

At least 12 people were arrested at the protests in London, police said late Sunday.