Police are giving orders to disperse to a large group of protesters outside CNN Center in Atlanta, Georgia.

A large number of police officers in helmets are creating a blockade. They are facing off against protesters holding signs.

In video taken by CNN, officers were seen handing out zip ties to other officers.

Ben Crump, the attorney representing George Floyd's family, said his family was "relieved" the officer who placed his knee on his neck was arrested but believed he should be charged with first-degree murder.

The lockdown has been lifted at the White House and the United States Secret Service has reopened entrances and exits to the White House campus for both staff and media.

CNN's Jim Acosta reported the protests have moved away from the White House and are now arriving on Capitol Hill. 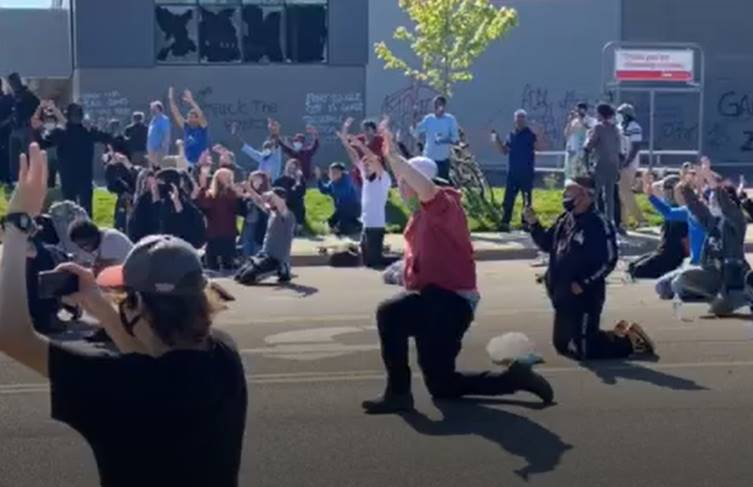 Protesters peacefully kneeled in Minneapolis. They chanted “hands up don’t shoot” at a line of Minnesota State Police and National Guard members who were manning a checkpoint near the Precinct 3 police station that was set ablaze last night.

Following protests in Houston over George Floyd's death, Mayor Sylvester Turner said, "The police and community is not the enemy of each other," in a tweet from his official Twitter account.

Hundreds of Houstonians marched from Discovery Green to City Hall Friday to protest police brutality and justice for Floyd.

Atlanta Mayor Keisha Lance Bottoms and Atlanta Police Department tweeted tonight that they plan to hold a news conference on the protests in the city.

The Atlanta Police Department did not provide the time of the briefing.

CNN's Nick Valencia described the scene at at the Atlanta protests where a fire could be spotted outside of the CNN Center.

Multiple police vehicles have had their windows broken in front of CNN Center.

Police have been responding to a large crowd of protesters that gathered outside of CNN Friday afternoon and were seen breaking windows of the building and spray painting the CNN sign.

The car fire outside of CNN Center was later extinguished.

Protesters and police clashed in various incidents Friday night outside the Barclays Center.

Some protesters threw water bottles and what appeared to be a bottle of paint at New York Police Department officers.

Officers tried to hold the barricade line as a handful of glass and plastic water bottles were thrown at them.

California Highway Patrol officers were hit by projectiles thrown by protesters on the freeway in San Jose, spokesperson Alicia Moreno confirmed to CNN.

Part of the 101 freeway was shut down, Moreno said.

Vehicles were vandalized during the protests, according to Moreno. There were no reported injuries.

CHP is focused on clearing the southbound 101 Freeway. The northbound direction has been cleared.