A police car appears to be on fire in Los Angeles. Police officers are holding back a line of demonstrators to prevent them from getting close to the car. 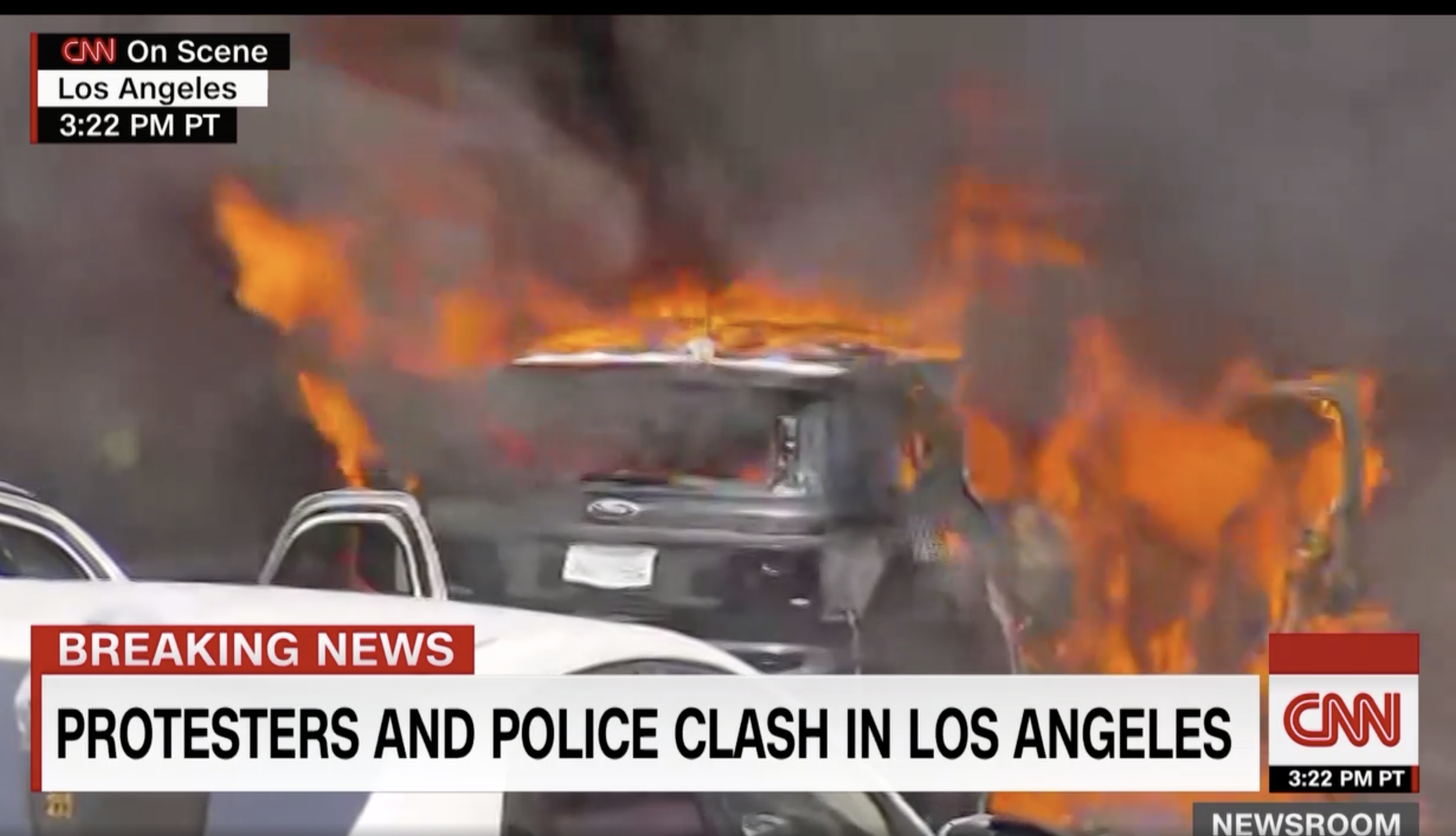 Denver Mayor Michael B. Hancock warned those who may be thinking of inciting violence during any peaceful protests today that their actions will no longer be tolerated.

“When there are agitators with selfish motives and reckless intentions hijacking demonstrations and inciting violence with homemade explosives, rocks, bottles, graffiti, and vandalism our officers will respond to maintain peoples safety, to protect themselves and to protect public and private property.”

At a news conference today, Hancock announced an order he signed earlier in the day establishing a citywide curfew effective tonight beginning at 8 p.m., and nightly from 8 p.m. to 5 a.m. through Monday.

Hancock sent a plea to both Denver residents, and those who may be traveling to Denver to protest, to “go home."

“If you are coming to Denver for one of the demonstrations scheduled for today once 8 p.m. hits our message is very simple, ‘go home.' If you're planning to come downtown tonight, ‘stay home,'" he said.

Hancock said that the National Guard has also been deployed to “support our efforts to maintain public safety, and protect infrastructure and property in the downtown area. We had hoped that we would not have to take these steps, but the aggressive and dangerous actions taken by some individuals and groups, under the cover of darkness has made it necessary.”

An officer contracted by the Federal Protective Service of the Department of Homeland Security was shot and killed Friday night in Oakland, California, the FBI said in a statement.

"As of late we have witnessed an outright assault on our law enforcement community. Last night in Oakland, California an assassin cowardly shot two Federal Protective Service contractors as they stood watch over a protest," Wolf said.

"Let me be clear when someone targets a police officer or a police station with an intention to do harm and intimidate, that is an act of domestic terrorism," DHS Acting Deputy Secretary Ken Cuccinelli said during a news conference Saturday.

Police in Los Angeles are swinging batons and firing rubber bullets at protesters as they try to move demonstrators back.

Protesters appear to be throwing objects at police offers.

"Move back, stop hitting us," a man could be heard yelling from a megaphone as police hit protesters with batons. 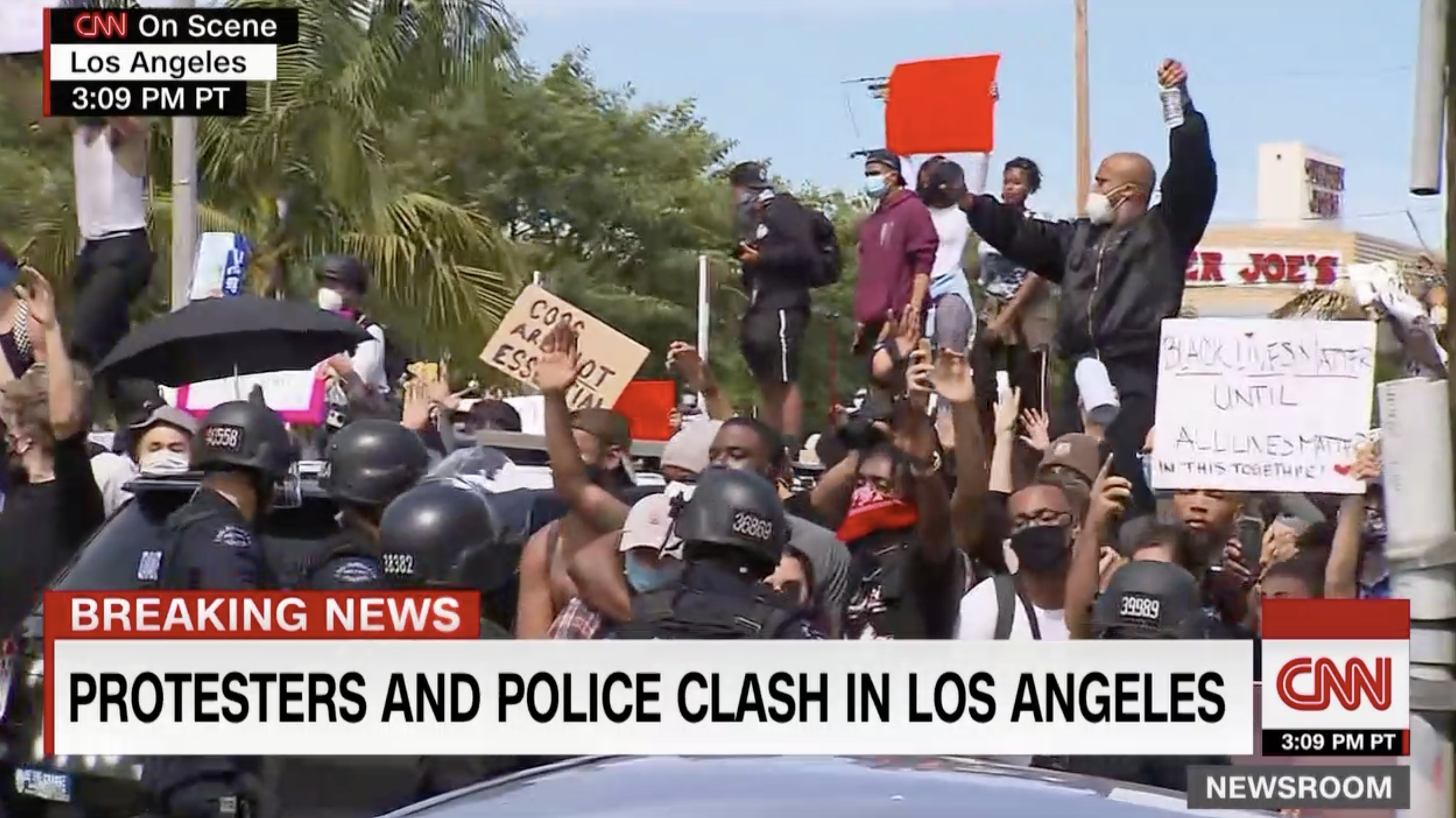 Columbus, Ohio, Mayor Andrew Ginther is instituting a citywide curfew from 10 p.m. to 6 a.m. "until it is rescinded," he said in a news conference Saturday.

The curfew comes after there was major damage done to buildings in the city Friday night and continued protests Saturday, he said.

On Friday night, approximately 100 public and private properties were damaged, at least 10 were looted and five police officers were injured from bricks and rocks being thrown at them, he said.

"What we are doing in no way lessens my belief that racism is a public health and safety crisis," Ginther said. "Nor does it mean we will stop making changes to becoming an equitable city that the people of Columbus deserve. These actions are laser-focused on those who have come to our city to do us harm."

Police have worked with protesters and listened to calls for change, Columbus Police Chief Thomas Quinlan said, but added the violence has gone too far. He said that the protests "transformed from lawful, peaceful protest into criminal riots, felony riot, felony vandalism, and people are being hurt."

New York police officers formed a line in Times Square and marched down the street telling the crowd that they were in an unlawful assembly and had to disperse. Officers chanted "move back" as they attempted to push protesters back.

Police then began to make arrests after bottles were thrown at the officers.

Pennsylvania Gov. Tom Wolf said in a statement Saturday he respects why demonstrators are protesting but urged for their actions to remain peaceful.

“This weekend, throughout Pennsylvania, people are protesting violence and injustice that occurs far too often against people of color," he said in the statement. "Everyone should speak out because no one should be at risk of harm because of oppression or racism. We have seen these injustices happen in the Commonwealth, and this week, we were all shaken by the murder of George Floyd in Minnesota."

He added: "As Pennsylvanians protest, I urge everyone involved to be peaceful and to keep each other safe."

"Throughout the day, my Administration has been in touch with municipalities, and we have offered whatever assistance is needed to keep our communities from suffering from additional violence and pain. Please stay safe, and remember that we all must look out for each other as we seek to make our commonwealth more just and fair for everyone," Wolf continued.

Police are telling people right now they need to move, as some were arrested in Time Square. CNN has inquired about arrests but no numbers regarding protesters taken into custody.