Police appeared to throw tear gas into the crowds to disperse protesters near the White House.

Protesters can be seen raising their hands at police and chanting "don't shoot!"

President Trump is due to deliver a speech from the Rose Garden. 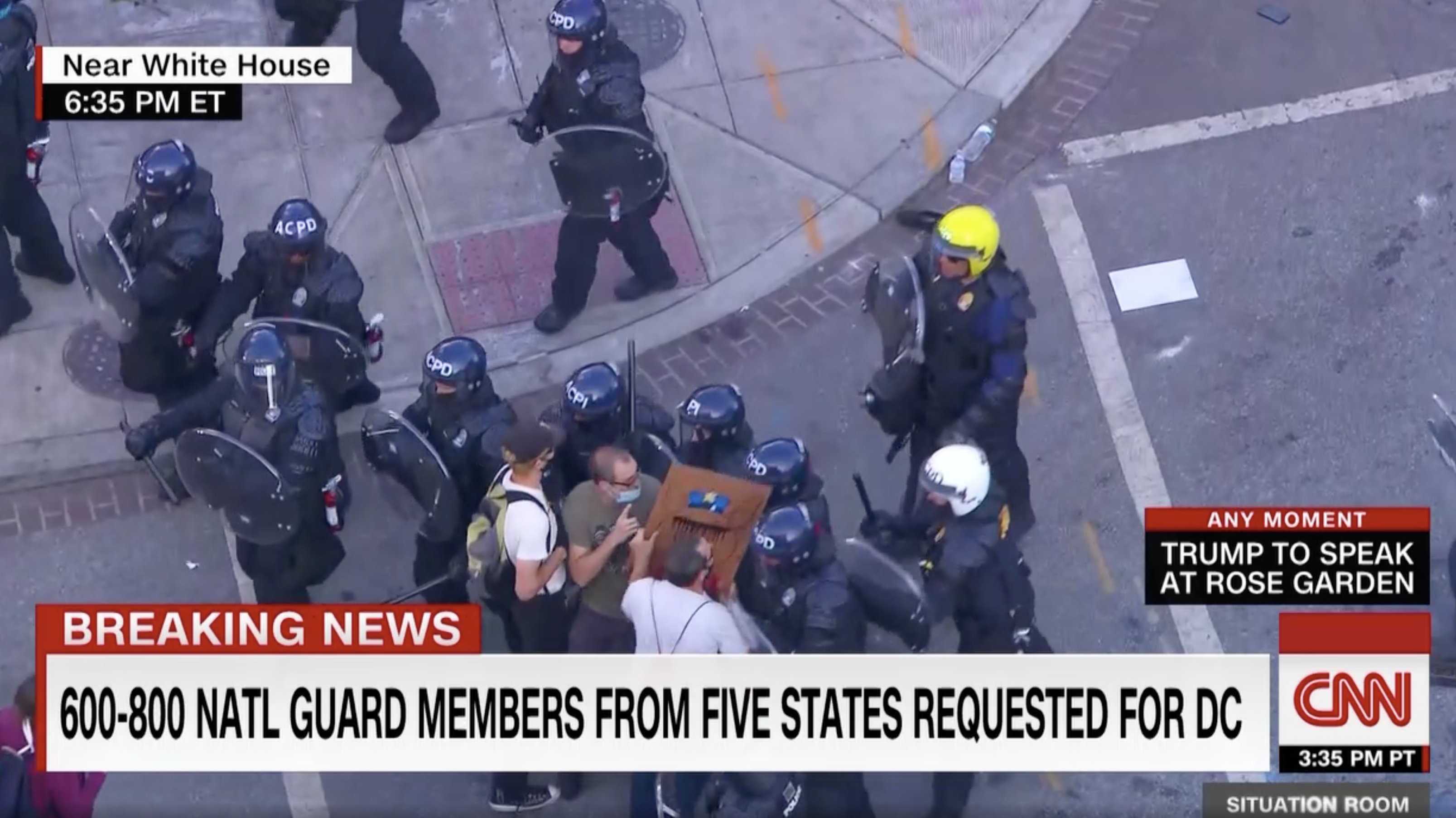 "This evening the Department has been working with the Department of Justice and other officials and the city of Washington, DC, to provide sufficient forces for protecting the city and maintaining peace this evening,” a defense official said.

"The stated goal is to help the city with their needs," the official added.

The entire DC National Guard, a little more than 1,200 personnel, have been activated.

The requests for additional National Guard forces were made to made to Delaware, New Jersey, New York, Ohio and Utah.

A senior defense official said that not all of the forces will be carrying lethal weapons but that some would "should the President decide to arm them."

The official said the forces will be tasked with safeguarding "monuments, White House, property and generally helping the DC police and DC law enforcement respond to any threats on life."

President Trump has “fanned the flames instead of bringing peace and calm” in the wake of protests surrounding the death of George Floyd, Illinois Gov. J.B. Pritzker – a Democrat and vocal critic of the President – said in a news conference Monday.

In response to a reporter's question on his comments today, when Pritzker called out Trump’s rhetoric in a call with other governors, Pritzker said that he heard what he found to be “inflammatory rhetoric” from the President during the course of the call and that other governors didn’t call it out so he “spoke out and felt that was my obligation.”

“It is usually the job of the president to stand up in these circumstances and try to bring down the temperature. That’s not what this President does,” Pritzker said.

“If he can’t say something that is going to help us across the nation to bring the temperature down, then he shouldn’t say anything at all,” he added.

In a news conference on Monday, Bowser confirmed her office had been working with federal authorities to coordinate a response to evening protests that have spread violence and destruction in Washington.

“We do expect that there will be more federal assets, as they say, deployed in or around the District of Columbia," she said

CNN reported earlier Monday an active duty military police battalion consisting of some 200 to 250 military personnel is now in the process of deploying to Washington, DC, and could be in the nation's capital as soon as tonight.

US Customs and Border Protection personnel have also been deployed to the National Capital Region to assist law enforcement partners responding to protests. 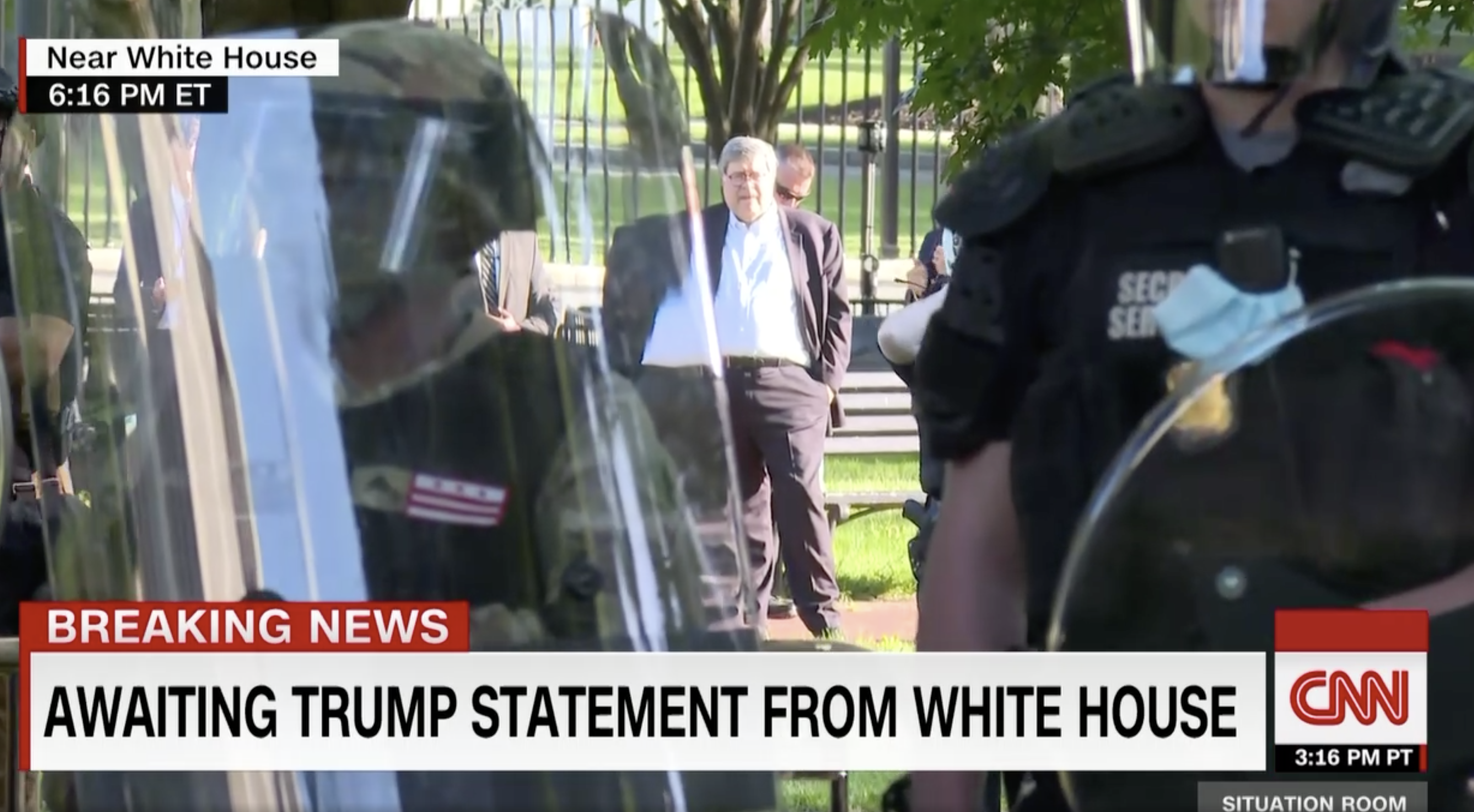 Attorney General William Barr is in Lafayette park with several other officials observing the protesters.

He is about 100 yards from protesters and behind a police line. Moments before he came outside, additional police were added to Lafayette park, including military police.

It appears he has an additional security detail with him.

US Customs and Border Protection personnel have been deployed to the National Capital Region to assist law enforcement partners, Acting Commissioner Mark Morgan tweeted Monday afternoon, with an accompanying photo.

CNN reported Sunday that CBP is deploying officers, agents and aviation assets nationwide at the request of federal, state, and local partners “confronting the lawless actions of rioters,” according to a statement from the agency.

“These ‘protests’ have devolved into chaos & acts of domestic terrorism by groups of radicals & agitators. @CBP is answering the call and will work to keep DC safe," Morgan tweeted Monday.

CBP is charged with enforcing the nation’s borders, but regularly assists law enforcement, like after Hurricane Katrina and Hurricane Rita, according to a CBP official. CBP’s legacy agencies also assisted local partners during the 1992 Rodney King protests, the official added.

The mission, in this case, is not enforcing immigration law but helping for law enforcement purposes.

President Trump will be delivering remarks at 6:15 p.m. ET from the Rose Garden, according to an updated White House schedule.

White House aides were instructed Monday to begin preparing for a possible statement by Trump from the Rose Garden, two officials told CNN, providing a venue for the President to address growing racial unrest gripping the country.

These are the cities and states with curfews Monday night due to the protests across the country in response to George Floyd’s death in Minneapolis, Minnesota.

Louisville Metro Police Chief Steve Conrad was relieved of his duties Monday after it was discovered the body cameras of officers potentially involved in a fatal shooting during Sunday night’s protests were not activated, Louisville Mayor Greg Fischer said at a news conference.

“As I learned about some of the details of what happened last night, I learned that the body cameras of the officers were not activated,” Fischer said. “This type of institutional failure will not be tolerated. Accordingly, I have relieved Steve Conrad of his duties as chief of Louisville Metro Police Department.”

According to a statement from Kentucky Gov. Andy Beshear, the Louisville Metro Police Department and Kentucky National Guard troops were dispatched to the corner of 26th Street and Broadway in Louisville, and were fired upon by protesters as they worked to disperse the crowd. Officers and guardsman returned fire and fatally struck one person, Beshear said in a statement.

“We lost a wonderful citizen named David McAtee, David was a friend to many, a well-known Barbecue man,” Fischer said. “They've nurtured so many people in their bellies and in their hearts before, and for him to be caught up in this, not to be with us today is a tragedy.”

Deputy Chief Rob Schroeder is now the active police chief, according to Fischer.

Conrad was already slated to retire at the end of the month, with the city announcing May 21 that his retirement would become effective June 30. Beshear has also authorized an independent investigation into the shooting from the Kentucky State Police.

“Our heart and prayers go out to David and his family during this very, very difficult time and again I'm extraordinarily, extraordinarily sorry,” Fischer said.