Former President George W. Bush issued a statement about the death of George Floyd, saying that he and former first lady Laura Bush are “anguished by the brutal suffocation” of Floyd and “disturbed by the injustice and fear that suffocate our country.”

The statement does not address President Trump’s response. It does say, “The heroes of America — from Frederick Douglass, to Harriet Tubman, to Abraham Lincoln, to Martin Luther King, Jr. — are heroes of unity. Their calling has never been for the fainthearted.”

"Laura and I are anguished by the brutal suffocation of George Floyd and disturbed by the injustice and fear that suffocate our country. Yet we have resisted the urge to speak out, because this is not the time for us to lecture. It is time for us to listen. It is time for America to examine our tragic failures – and as we do, we will also see some of our redeeming strengths.
It remains a shocking failure that many African Americans, especially young African American men, are harassed and threatened in their own country. It is a strength when protesters, protected by responsible law enforcement, march for a better future. This tragedy — in a long series of similar tragedies — raises a long overdue question: How do we end systemic racism in our society? The only way to see ourselves in a true light is to listen to the voices of so many who are hurting and grieving. Those who set out to silence those voices do not understand the meaning of America — or how it becomes a better place.
America’s greatest challenge has long been to unite people of very different backgrounds into a single nation of justice and opportunity. The doctrine and habits of racial superiority, which once nearly split our country, still threaten our Union. The answers to American problems are found by living up to American ideals — to the fundamental truth that all human beings are created equal and endowed by God with certain rights. We have often underestimated how radical that quest really is, and how our cherished principles challenge systems of intended or assumed injustice. The heroes of America — from Frederick Douglass, to Harriet Tubman, to Abraham Lincoln, to Martin Luther King, Jr. — are heroes of unity. Their calling has never been for the fainthearted. They often revealed the nation’s disturbing bigotry and exploitation — stains on our character sometimes difficult for the American majority to examine. We can only see the reality of America's need by seeing it through the eyes of the threatened, oppressed, and disenfranchised.
That is exactly where we now stand. Many doubt the justice of our country, and with good reason. Black people see the repeated violation of their rights without an urgent and adequate response from American institutions. We know that lasting justice will only come by peaceful means. Looting is not liberation, and destruction is not progress. But we also know that lasting peace in our communities requires truly equal justice. The rule of law ultimately depends on the fairness and legitimacy of the legal system. And achieving justice for all is the duty of all.
This will require a consistent, courageous, and creative effort. We serve our neighbors best when we try to understand their experience. We love our neighbors as ourselves when we treat them as equals, in both protection and compassion. There is a better way — the way of empathy, and shared commitment, and bold action, and a peace rooted in justice. I am confident that together, Americans will choose the better way." 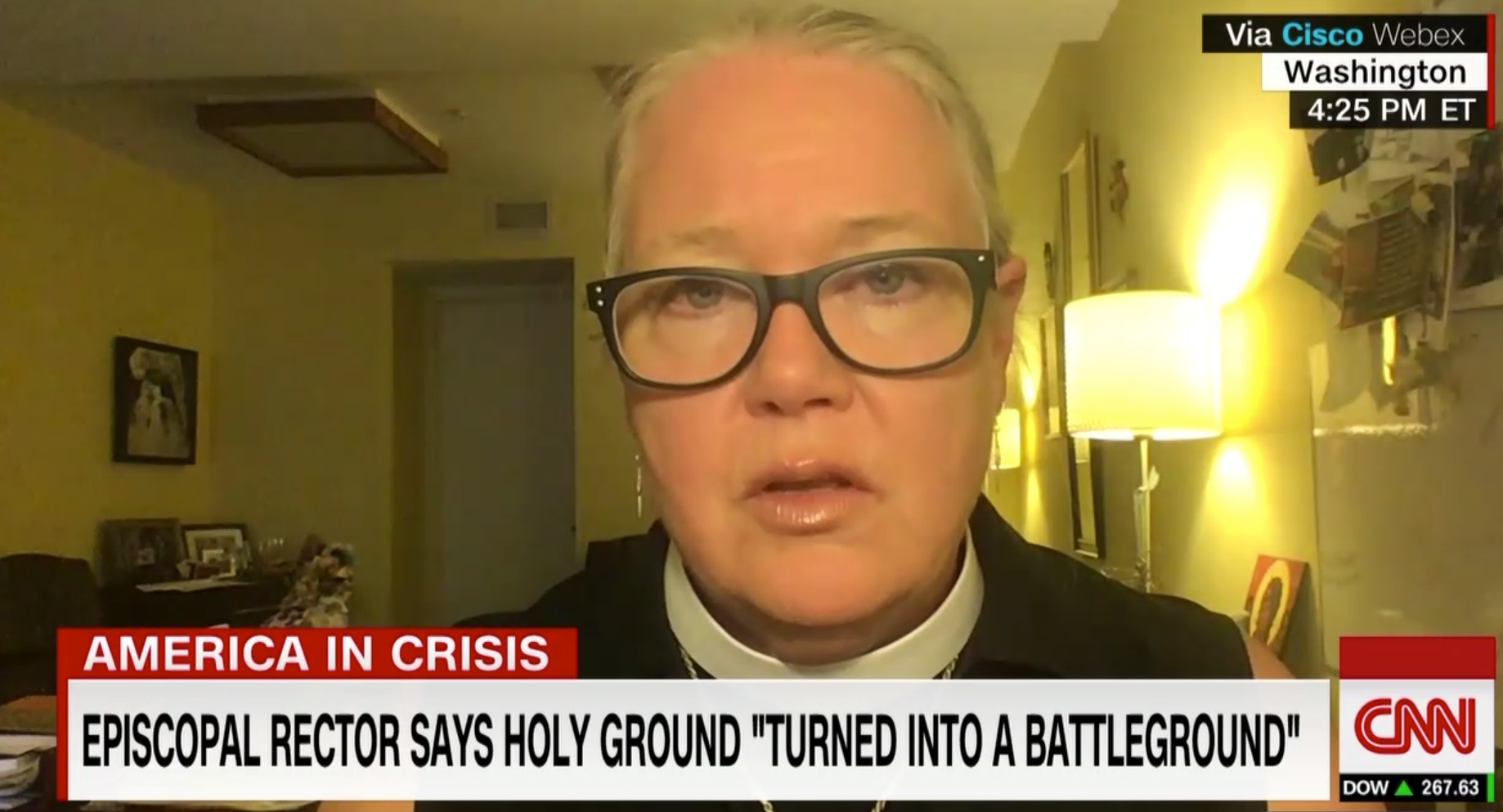 Rev. Gini Gerbasi, the rector at St. John's Episcopal Church of Georgetown, said she was at the scene when police fired rubber bullets to disperse the crowds so that President Trump could walk over to the church and take photos.

She said she was shocked when police moved on protesters, but was more offended that Trump turned the "holy ground into a photo-op."

"I never would have imagined that I would look up and literally see an entire line of police officers all in this heavy military gear, all black, and these shields, literally pushing and shoving and driving people off of the church patio," she told CNN's Jake Tapper in an interview. "I was literally helping wipe away tears in people's eyes and tried to tend to them and help them on the grounds and suddenly the police were pushing us back. And the people were dropping to the ground, afraid. And they were — when they hear those flash sounds, they thought they were being shot. And people were running at us."

She added: "I was already stunned and shocked and deeply, deeply offended that they had taken what had become holy ground and had been holy ground for 200 years and literally desecrated it, turned it into not a metaphorical battleground, but a literal battleground ... And to stand in front of a church and somehow claim that as his right and privilege and culture and holding the bible, was a sacrilege. An absolute sacrilege. And I wouldn't make — I'm not joking when I say I would rather the President live by those words, those words of healing, wholeness, compassion, love, peace, generosity, care for those who have been marginalized. For him to turn that book into a prop, for him to turn that holy ground into a battleground, for him to turn that holy ground into a photo op is a sacrilege."

Outlaw did not elaborate on the type or severity of the officers' injuries.

Philadelphia Mayor Jim Kenney said a group of people armed with bats in the city were eventually dispersed by police, but that he was not happy about how long it took for that to happen.

"Last night a group of people in Fishtown took it upon themselves to make a show of protecting their neighborhood. They picked up baseball bats and in turn exemplified the deep divides in our community. Their actions were antagonistic and made a bad situation worse," he said.

Minutes ahead of President Trump's televised address from the Rose Garden Monday evening, Attorney General William Barr ordered authorities to clear a crowd of protesters that had gathered nearby, according to a Justice Department official.

Barr and other top officials from agencies responsible for securing the White House had previously planned to secure a wider perimeter around Lafayette park, a federally-owned green space just north of the building, in response to fires and destruction caused by protesters on Sunday night. That plan would have cleared the area later used for the President's walk to a nearby church for a photo-op by 4 p.m. ET, the official said.

But it never happened. When Barr arrived at Lafayette park just after 6 p.m. ET — in a scene that was captured on news cameras and elicited heckles from the large, peaceful crowd — Barr saw that the area had not been emptied, and told police to clear the area, the official said. If federal law enforcement was met with resistance by the protestors, crowd control measures should be implemented, Barr had said, according to the official.

Barr had been told that police believed protestors were gathering rocks to throw at law enforcement, and while he was in the park, water bottles were thrown in his direction, the official said. CNN did not witness any water bottles being thrown at the attorney general. Camera footage shows him standing and watching the crowd for several minutes, flanked by a security detail and two senior department officials.

Just before 6:24 p.m., police broadcast their first warning for the crowd to distance. A CNN correspondent reporting from the rooftop of a nearby hotel heard three warnings broadcast over the next ten minutes as authorities moved closer to the crowd.

At 6:35 p.m., authorities began charging the crowd in lockstep with their shields raised, some using their batons to strike the protestors as gas canisters were deployed.

Protesters are marching through cities across the US over the death of George Floyd at the hands of a police officer in Minneapolis, Minnesota.

The Minnesota Department of Human Rights is launching a civil rights investigation into the Minneapolis Police Department, the state's governor announced Tuesday.

The investigation will look into practices of the department for the last 10 years.

According to a release from Gov. Tim Walz's office, the investigation will look to see if Minneapolis Police have engaged in systemic discriminatory practices targeting people of color.

“Silence is complicity. Minnesotans can expect our administration to use every tool at our disposal to deconstruct generations of systemic racism in our state,” Walz said. “As we move forward, we ask the community to watch what we do, not what we say. It is going to take action at all levels from the neighborhood on up, to get the change we need to see. This effort is only one of many steps to come in our effort to restore trust with those in the community who have been unseen and unheard for far too long.”

"We will not be asking the United States military to come into the state of Texas," Abbott said at a news conference provided to CNN by affiliate KTVT. "We know the Texans can take care of Texas."

The remark comes less than a day after President Trump threatened to use military force if violence does not stop. "If a city or state refuses to take the actions necessary to defend the life and property of their residents, then I will deploy the United States military and quickly solve the problem for them," Trump said.

Abbott said that the state has "an abundance of resources that are being provided by the Texas Department of Public Safety."

"They have deployed something around 3,000 people across the entire state of Texas already," he added.

Abbott also said that there has not been a request for Texas to send National Guard members to Washington, DC.

"I do not expect that request," he added. "Texas National Guard are here for Texans, and that's exactly what they will be used for," Abbott said.

About half are concentrated in the greater Los Angeles area and others are in Sacramento and Alameda County in Northern California, Brian Ferguson, spokesperson for California Governor's Office of Emergency Services, tells CNN.

Protesters walked past the Los Angeles Police Department headquarters and stood outside City Hall. Others held signs in front of police officers "to show them their frustration with what they believe is systemic," CNN's Stephanie Elam reported.

During the march, protesters hugged and engaged in conversations, she said.