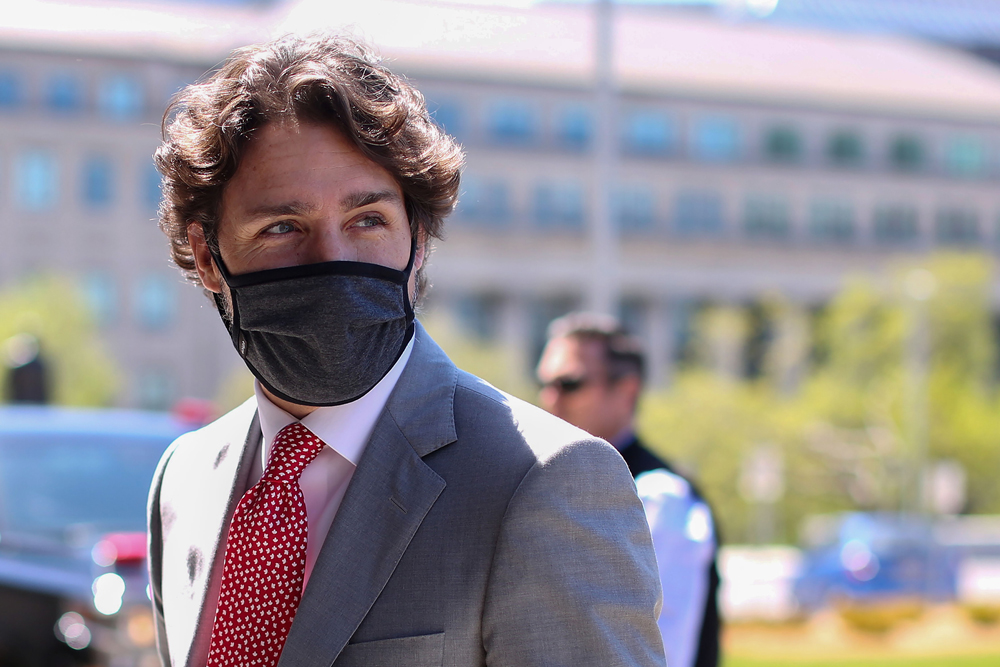 Canadian Prime Minister Justin Trudeau was silent for more than 20 seconds during a news conference Tuesday after he was asked what he thought of the forceful dispersal of protesters and President Trump calling for military intervention.

During the pause, Trudeau clearly looked uncomfortable, and seemed to be considering his response before finally answering that Canada has challenges with racism, too.

“We all watch in horror and consternation what’s going on in the United States, it is a time to pull people together, but it is a time to listen, it is time to learn what injustice is and it continues despite progress over years and decades. But it is a time for us as Canadians to recognize that we, too, have our challenges that Black Canadians and racialized Canadians face discrimination as a lived reality every single day. There is systemic discrimination in Canada, which means our systems treat Canadians of color, Canadians who are racialized differently than they do others,” said Trudeau during his daily news conference Tuesday from Ottawa.

Several cities, including Montreal and Toronto, staged sizable demonstrations over the last several days. With chants of "black lives matter," protesters showed solidarity with the family of George Floyd but also called on Canadian leaders to acknowledge that racism is a still a problem in Canada.

While most protests are continuing peacefully, Montreal Police reported that at least 11 people were arrested Sunday and investigations continue after looting and acts of mischief in the downtown core.

To mark the final nine minutes of George Floyd’s life, the Kennedy Center in Washington, DC, will dim its lights for nine nights, starting tonight, according to a thread of tweets from the institution.

“Beginning Tuesday, June 2, the lights that normally illuminate the John F. Kennedy Center for the Performing Arts will be dimmed for nine nights in honor of George Floyd, marking the final nine minutes of his life," the tweet said.

The Kennedy Center, which received $25 million in coronavirus stimulus funding, said the dimming of the lights is a show of “grief,” and not a solution.

One of the tweets in the six-tweet thread notes the performing arts center will strive to incorporate more African American stories and artists moving forward.

Dallas Police Chief Renee Hall described protests last night in her city as peaceful, despite a number of people being arrested.

Hall said that while the protesters were peaceful, they knelt in the roadway holding up their hands and saying “don’t shoot." She said the arrests came because the protesters broke the law by blocking the roadway and also out of concern for their safety.

Hall said the protesters were processed and released and will be charged at a later date.

The majority of the arrests were for violating curfew, which went into effect at 7 p.m. ET. The other arrests were either burglary or rioting.

Two officers were hurt yesterday, but neither had life threatening injuries, and one police vehicle was set on fire.

About the protests: Newsham said federal officers moved a group of protesters in Lafayette park yesterday. He said he was alerted to President Trump's movement shortly before it occurred — at 6:30 p.m.

"The Metropolitan Police Department did not participate in that movement," Newsham said.

Gen. Joseph Lengyel, the chief of the National Guard Bureau, told reporters there are more than 18,000 National Guard members responding to civil unrest across 29 states and Washington, DC, with that number still increasing.

There are more than 42,000 members working on Covid-19 operations as well, according to Lengyel.

He also said there was a reduction in violence last night across the country, even though they saw “sustained or even increasing levels of protest.” There were no Guard members reported injured last night.

Nearly 1,300 members of the DC National Guard were on duty “and they were augmented last night by some additional soldiers from Utah and from New Jersey,” Lengyel said. An additional nearly 1,500 members are expected to augment DC from Indiana, South Carolina, and Tennessee.

“The civil unrest mission is one of the most difficult and dangerous missions that we do here in our domestic portfolio of mission sets,” Lengyel said. “Generally, this mission is an uncomfortable mission. They don’t like doing it… our Guard members live and work and are from these communities.

The curfew was first put into place last night, when it went into effect at 11 p.m. ET. Today it will go into effect at 8 p.m. ET — and it remain in place for the rest of the week, according to de Blasio. It expires at 5 a.m. ET each morning.

De Blasio pointed to Sunday night's looting in lower Manhattan when talking about the need for a curfew.

“That’s what made us feel something had to then be different and that’s when we got to together, the commissioner and I with the governor. We decided in the scheme of things, curfew made sense. And we would start it for a later hour understanding how this city, the rhythms of this city are different than a lot of other places,” the mayor said.

Having the curfew at 8 p.m. ET — which is before it gets dark — “we think will magnify our ability to control the situation,” he added.

“We do not allow looting, period,” the mayor said.

Officers were filmed in downtown Atlanta breaking windows of the vehicle, yanking a woman out of the car and tasing a man. The two victims were later identified as Spellman and Morehouse college students. Both schools are historically black.

Arrest warrants have been issued for Lonnie Hood, Willie Sauls, Ivory Streeter, Mark Gardner, Armond Jones and Roland Claud. Some of the charges against the officers include aggravate assault of Messiah Young, aggravated assault of Taniyah Pilgrim, simple battery and criminal damage to property, Howard said.

The officers have until the end of the day on June 5 to surrender, Howard said.

A citywide curfew was in effect from 11 p.m. ET Monday to 5 a.m. this morning. Tonight's curfew goes into effect at 8 p.m. ET.

Thousands of people are taking to the streets across the country in both peaceful protests and violent demonstrations against law enforcement over the death of George Floyd, an unarmed black man who was killed by police in Minneapolis, Minnesota.

New York Gov. Andrew Cuomo urged people to recognize the difference between protestors outraged over the death of George Floyd and looters that have struck some areas.

"The protesters are separate from the looters," Cuomo said, adding that curfews implemented across the stare are to help law enforcement "deal with the looters."

Cuomo said that many issues — the coronavirus pandemic, the protests and the looting — are "getting blurred" and each needs to be addressed separately.

"We can't blur the line between these problems," he said.

He stressed his support for protesters, adding that they want a "better America."