George Floyd's death inspired a national movement and forced his family to demand justice. Now, it's time for them to celebrate his life.

The first in a series of memorial services honoring Floyd will take place Thursday afternoon.

His family, friends and a number of guests will gather at the North Central University in Minneapolis. Rev. Al Sharpton, the founder of the National Action Network, will deliver a eulogy to honor Floyd's life.

"We must turn this moment into a movement," Sharpton told reporters on Wednesday, describing Floyd as a "linchpin" for police accountability.

Minnesota Gov. Tim Walz said Thursday's memorial would be a chance for everyone to heal.

"It's critically important for them to see and for Minnesotans to display to them that there's another side to us and to this state that they didn't see last Monday night," Walz said on Wednesday.

Anyone who met Floyd couldn't miss seeing him. He was 6 feet 4 inches tall, a "gentle giant."

"He's a gentle giant, he don't hurt anybody." 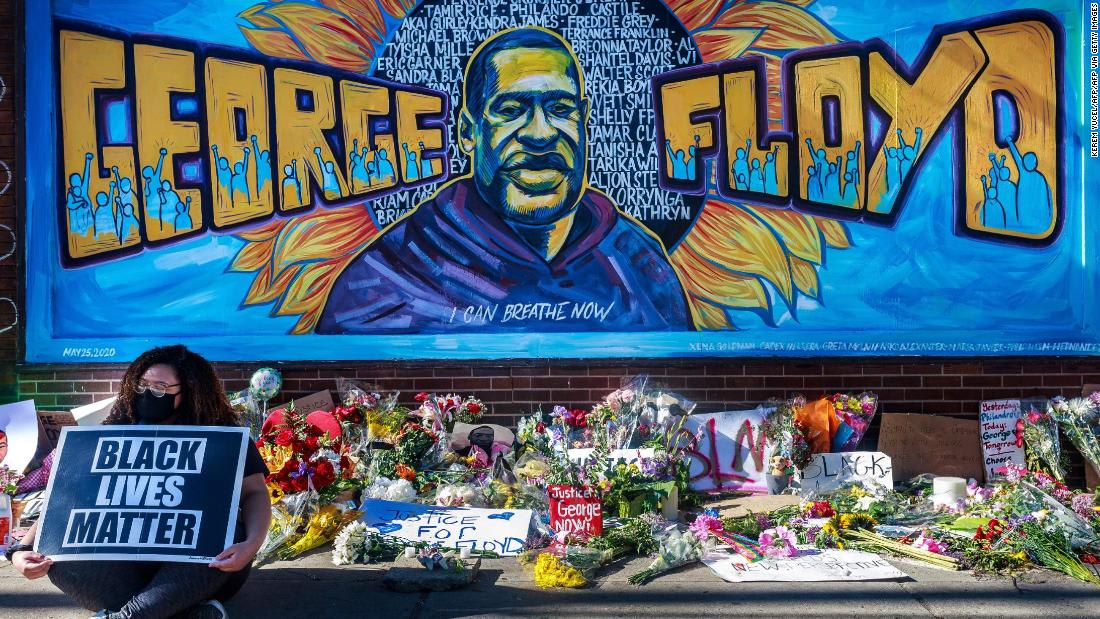 George Floyd pleaded with officers before his death in Minneapolis, asking them why they were detaining him and not resisting arrest in any way, a friend who was with him said.

Maurice Lester Hall, 42, was with Floyd in the car during the arrest that led to his death, The New York Times reported. It said it tracked him down in Houston, where he fled two days after he witnessed the death.

In an interview with the paper, Hall described Floyd as a mentor and fellow Houston native, saying they spent most of Memorial Day together before the fatal police encounter.

"He was, from the beginning, trying in his humblest form to show he was not resisting in no form or way," Hall told the paper Wednesday night. "I could hear him pleading, 'Please, officer, what's all this for?'"

Throngs of protesters have taken to the streets since Floyd died on May 25 to demand the arrest of all four officers involved. Authorities initially arrested Derek Chauvin, the officer who pinned Floyd to the ground by his neck for 8 minutes and 46 seconds before he died. On Wednesday, they upgraded the murder charges against him and charged three other former officers who were at the scene with aiding and abetting the killing.

Hall said he'll never forget what he saw that day.

"He was just crying out at that time for anyone to help because he was dying," Hall told the paper. "I'm going to always remember seeing the fear in Floyd's face because he's such a king. That's what sticks with me, seeing a grown man cry, before seeing a grown man die."

After days of protests, Thursday will be a bittersweet day as Floyd's family holds a memorial for him and three of the four officers arrested make their first court appearance. 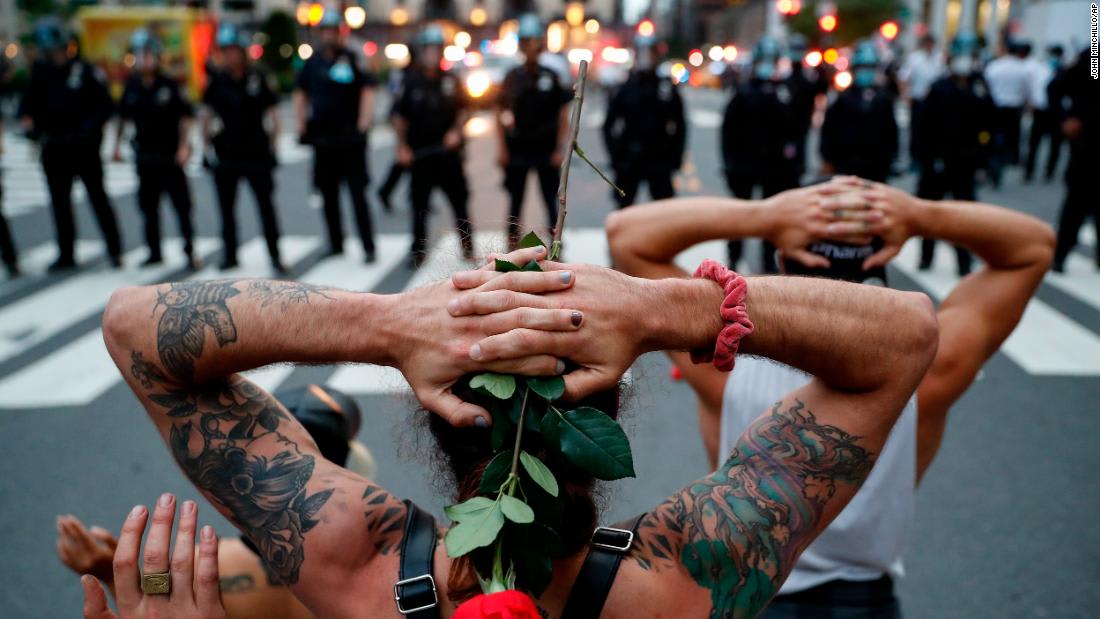 Thousands across the US have taken to the streets to protest, or opened their wallets to donate to help support the Black Lives Matter movement.

Zoe Amira, a 20-year-old YouTube creator, wanted to make it easier for those people to contribute to the cause simply by streaming a video. Her video, to be exact.

Titled "how to financially help BLM with NO MONEY/leaving your house (Invest in the future for FREE)," the hourlong video opens with text that reads: "Hello and thank you for clicking this video project. This video and the series that will soon follow are to serve as a fundraiser."

It goes on to note that 100% of the ad revenue will be donated to a list of organizations, including BlackLivesMatter.com, the ACLU, the Brooklyn Community Bail Fund, the Minnesota Freedom Fund, George Floyd's Family Gofundme and a handful of other nonprofits. The rest of the video features art made by black creators.

Amira, who lives in the Chicago area, calls this form of activism "ad-tivism." Whatever it may be deemed, it's seemingly caught on: The video's amassed over 5 million views, and counting, so far.

"I think it's opening the door for people-powered fundraising, and that's what's really exciting about it," Amira, who has about 56,000 subscribers to her channel, told CNN."It's a low barrier to entry -- you don't need much to support something you believe in."

Several other YouTube creators have since followed her lead. Read more here: 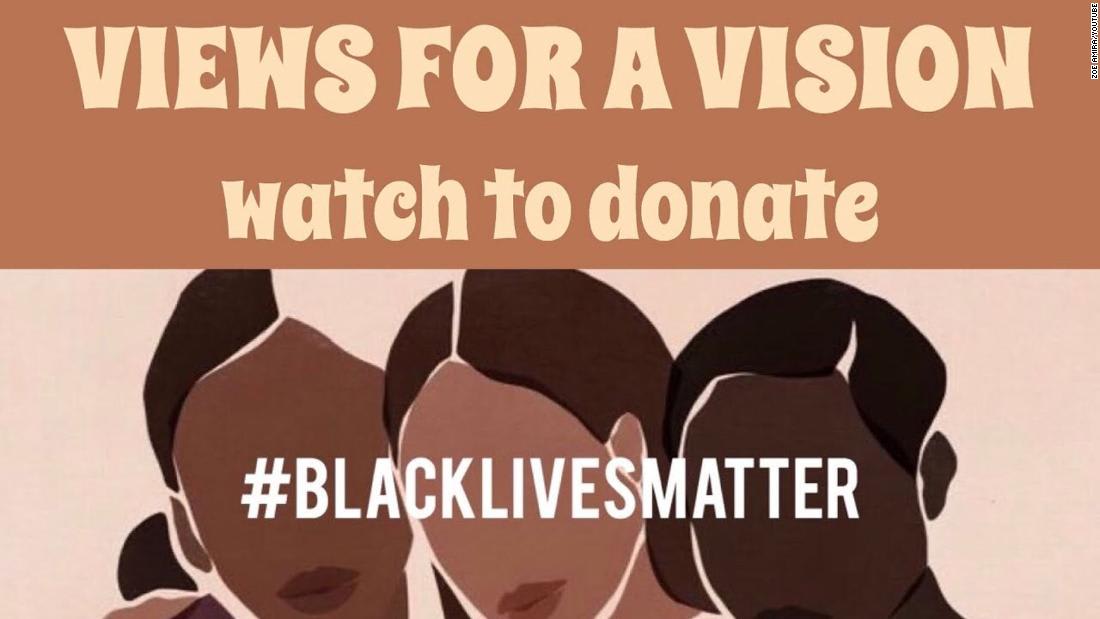 If you're just joining us now, here's the latest on the George Floyd protests happening across the US:

And some headlines from earlier today:

The American Civil Liberties Union (ACLU) branch in Southern California has filed a lawsuit on behalf of the Black Lives Matter organization over the curfews in Los Angeles and San Bernadino.

The lawsuit "challenges the draconian curfews imposed throughout Southern California to crack down on widespread protests against systemic police violence towards Black people," said the ACLU in a press release on Wednesday.

"The curfews’ extraordinary suppression of all political protest in the evening hours plainly violates the First Amendment to the US Constitution, and their blanket restrictions on movement outside working hours violate the Constitution’s protection of freedom of movement," said the release.

The following defendants are listed in the lawsuit:

Meghan, the Duchess of Sussex, spoke publicly for the first time about George Floyd's death, calling it "absolutely devastating."

She was speaking to the graduating class of Immaculate Heart High School in Los Angeles, in a video message commencement speech on Wednesday evening.

In a heartfelt address, she said she had been hesitant to speak about the ongoing protests because she didn’t want her words to be picked apart -- but ultimately decided to do so after remembering a former teacher who used to say, "Always remember to put other’s needs above your own fears.”

“Those words have stuck with me throughout my entire life and I have thought about it more in the last week than ever before,” the Duchess said.

She recalled memories of the 1992 Los Angeles riots, which happened when she was 11 or 12 years old living in the city, and said those riots were “also triggered by senseless act of racism.”

“I know you know that black lives matter, so I am already excited for what you are going to do in the world," she told the new graduates.

“You’re going to use your voice in a stronger way than you have ever been able to because most of you are 18, or you’re turning 18, so you’re going to vote. You’re going to have empathy for those who don’t see the world through the same lens that you do.”

Yesterday Instagram feeds turned into endless scrolls of black squares, as people observed "Blackout Tuesday" -- a day promoted to mourn and call for policy change in the wake of George Floyd's death.

But it quickly drew controversy for two reasons: Critics argued the use of the hashtag in these posts clogged up critical channels of information on social media, and that it was being used as a form of performative self-promotion in place of more substantial action.

Clogging up channels: Hashtags on Twitter and Instagram are a common way for people to monitor a situation or interest. And since people have been including the #BlackLivesMatter tag on their black square posts, the actual protests have been erased from social media feeds.

"When you check the #BlackLivesMatter hashtag, it's no longer videos, helpful information, resources, documentation of the injustice, it's rows of black screens," music artist Kehlani explained on her Instagram story.

What does it actually do? Some argued that instead of posting a black square -- which doesn't contribute much to the actual conversation surrounding racial injustice or the ongoing protests -- allies of the movement could simply observe a virtual day of silence and pause posting images that are unrelated to Black Lives Matter.

This could redirect attention away from the poster and toward the protests, and open up much-needed space for the voices of black activists and advocates. 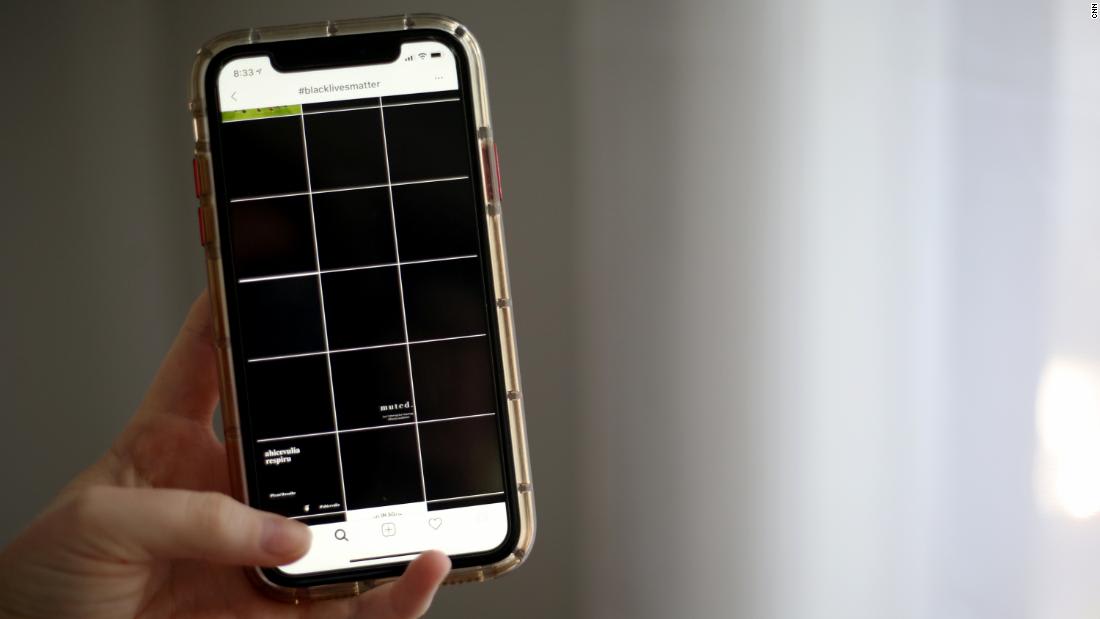 The George Floyd in the protests have sparked solidarity demonstrations in a number of cities outside of the US -- and in some cases, highlighted the problems surrounding racism in different countries.

In Paris, Floyd's death has struck a nerve with many people, who faced their own crisis of racial injustice in 2016 when a black man, Adama Traore, died while being detained by police.

"(There is) a great deal of anger out there on the streets about the fact that nearly four years on, no one has been brought to justice," said CNN Correspondent Melissa Bell Thursday. "And there is still controversy over how, exactly, he died."

Now, with Black Lives Matter protests across Paris, the hashtag #JusticePourAdama (Justice for Adama) is trending in France.

“Adama Traoré’s case has become a symbol of police violence in France,” said his brother, Assa Traoré, during comments made earlier this week.

NBA legend and Hall of Famer Kareem Abdul Jabbar said the decision to charge the Minneapolis officers was "a step toward justice," and praised the Minnesota governor and Minneapolis mayor for acting quickly.

Speaking to CNN on Wednesday, he offered an analogy for what it's like to be black in America.

“It’s like, you know, the United States is this wonderful bus with great seats in the front of the bus. But as you go further to the back of the bus, the seats get worse and the fumes from the exhaust leak in and really wreck with people's health and their lives. But the people at the front of the bus, they have no complaints. It's kind of like that," he said.
"That dust accumulates in the lives of black Americans, and it eliminates all the mechanics of democracy. Democracy doesn't work for us."

He added that nothing had changed in the past 30 years in regards to systemic racism and injustice, pointing to the Rodney King beating and Los Angeles riots in 1991 and 1992.

"Something has to be done." he said. "It's not enough to say, 'That was terrible and my thoughts and prayers are with you.' That's not getting anything done."