Washington, DC, will not impose a curfew Thursday night, after protests were peaceful and no arrests were made Wednesday night.

Metropolitan Police Chief Peter Newsham said he expects a large protest — bigger than any protest in recent times — this Saturday.

Attorney General William Barr said the US is currently facing "two serious challenges to the rule of law" — the brutality that led to George Floyd's death and those who have "hijacked protests to engage in lawlessness."

Barr, just about an hour ahead of today's memorial service for Floyd, said, "today is a day of mourning. He said justice must be served.

However, Barr also denounced violence stemming from some protests.

"While many have peacefully expressed their anger and grief, others have hijacked protests to engage in lawlessness," he said. "Such senseless acts of anarchy are not exercises of First Amendment rights."

Some background: It was Barr who on Monday evening ordered authorities — clad in military-grade guard and head shields — to clear a crowd of peaceful protesters that had gathered near the White House, according to a Justice Department official.

Soon after, President Trump addressed the press from the White House Rose Garden, threatening governors and local officials to quell the protests in their states or he would move to involve US military — something he doesn't have the absolute legal authority to do. He subsequently walked past the area where protesters had just been cleared to take a photo with a Bible at a church damaged by demonstrators.

Medical Professionals at Jackson Memorial Hospital in Miami took a knee at about 12:06 p.m. local time during a moment of silence in remembrance of the life of George Floyd.

This happened during a planned demonstration to bring awareness to the deaths and injustices on African Americans.

Virginia Gov. Ralph Northam said he is directing the Department of General Services to remove the controversial Robert E. Lee Monument “as soon as possible.”

"That statue has been there for a long time. It was wrong then, and it's wrong now. So we're taking it down," the Democratic governor said during a news conference in Richmond.

The announcement comes as thousands have been protesting in the US to decry the death of George Floyd, police brutality and racism.

The governor said the Lee statue will go into storage while they will work "with the community to determine its future."

"Make no mistake, removing a symbol is important but it's only a step. It doesn't mean problems are solved. There are still monuments of inequalities that exist in our commonwealth and in this country," the governor said, calling for change and healing.

Northam explained that he and the General Assembly were able to overturn laws banning the removal of the confederate monuments by passing new legislation.

“This year I proposed legislation to let cities and counties decide what to do with monuments in their communities. Take them down, move them somewhere else, or add additional context. That law takes effect in four weeks,” Northam said.

That legislation does not apply to the Lee statue because it is state-owned, Northam said.

“It sits on a 100-foot circle of land, a state-owned island surrounded by the city of Richmond. The whole thing is six-stories-tall. It towers over homes, businesses, and everyone who lives in Virginia, from elegant Monument Avenue to the public housing neighborhood of Gilpin Court,” Northam said.

The statue weighs 12 tons and sits on top of a pedestal.

“…[W]hen it is the biggest thing around, it sends a clear message: ‘this is what we value the most.’ But that’s just not true — anymore,” Northam said.

Some context: Statues memorializing Confederate generals and soldiers have been at the center of an intense national debate in recent years, with opponents of them saying they wrongly honor long-deceased supporters of slavery.

Those who defend preserving the statues, including many historians, argue they shouldn't be destroyed because they can impart important lessons about the ugliness of the past. 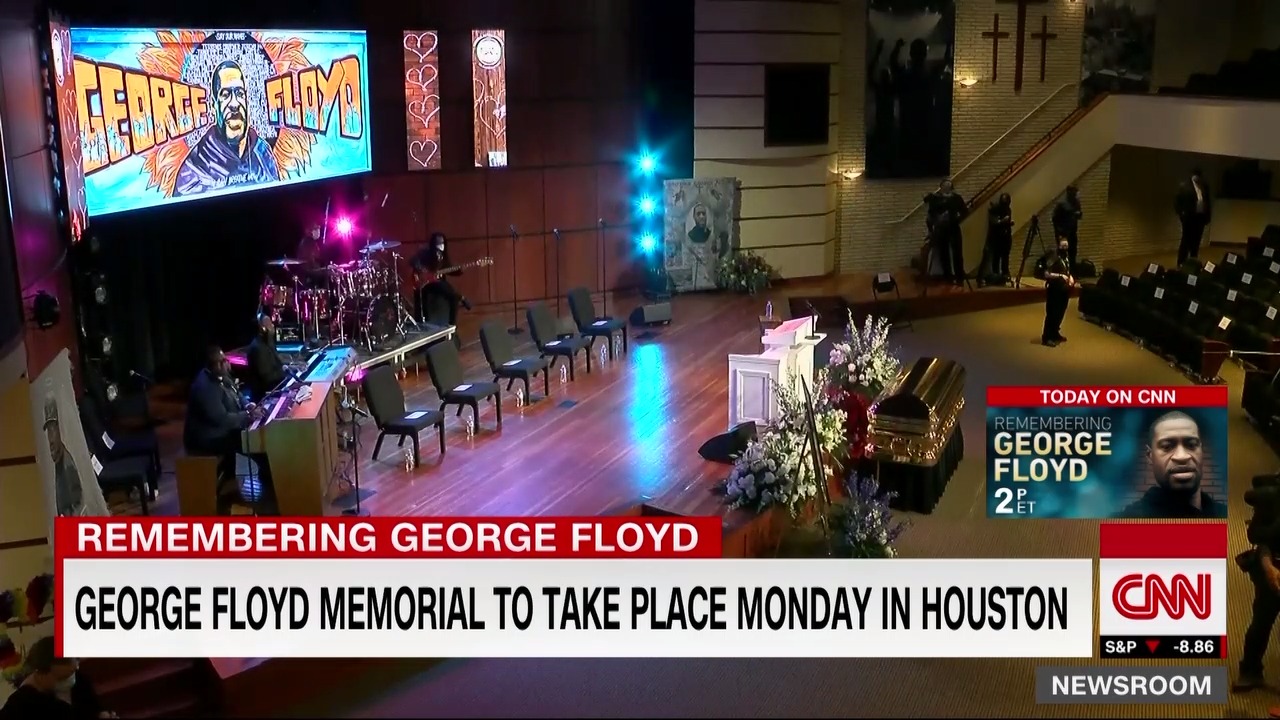 George Floyd's family will hold the first of several memorial services this afternoon in Minneapolis.

His family, friends and a number of guests will gather at North Central University in Minneapolis for the 2 p.m. ET service. Rev. Al Sharpton, the founder of the National Action Network, will deliver a eulogy to honor Floyd's life.

On Saturday, there will be a public viewing and a private memorial service in North Carolina — the state where he was born.

Next Monday, Floyd's body will return to Houston for a public memorial and private service on Tuesday. Floyd moved to Houston at a young age with his family.

Baltimore City State’s Attorney Marilyn Mosby, who was the prosecutor in the 2015 Freddie Gray case, said that the exposure of that case eventually led to reform — and more changes can happen now because of George Floyd.

Gray died in April 2015 after suffering a neck injury while in police custody — his death spurring massive protests and riots in Baltimore.

While the officers in the Gray case were not convicted, she believes positive actions came from it.

“But in addition to those tangible sort of reforms, there are still systemic reforms that have to take place in order to truly hold those officers accountable,” Mosby told CNN’s John King.

Minnesota Attorney General Keith Ellison, who has taken over prosecution of the Floyd case, has admitted it will be challenging to win a conviction.

Mosby said there needs to be guarantee of a jury trial in the Floyd case.

“When it comes to even after this case and presenting the evidence, some of the hurdles they'll be up against is that these are going to be colleagues, and there’s what some call the ‘blue wall of silence,’ and they're going to have to confront their colleagues and talk against them,” she said.

But having video is key in Floyd’s case, Mosby said, which was not available in Gray’s.

“I think one of the things that is in the benefit of the Floyd case is that there is a broad sort of understanding now and recognition that this murder was committed on camera in front of everybody to see,” she said.

New York Gov. Andrew Cuomo said the state will hold a moment of silence at 2 p.m. ET in honor of George Floyd.

Floyd's death sparked protests across the country after video emerged that shows the 46-year-old black man handcuffed and on the ground saying, "I can't breathe," as a Minneapolis police officer holds him down with a knee on his neck.

Richmond Mayor Levar Stoney said he is proposing an ordinance to the city council to remove all of the Confederate monuments on Monument Avenue.

“We have two pandemics in this country. Covid-19 and racism,” Stoney said. “One is six months old, the other 400 years old."

What this is about: Virginia Gov. Ralph Northam is expected to announce plans to remove the controversial Robert E. Lee monument from Richmond’s historic Monument Avenue.

Statues memorializing Confederate generals and soldiers have been at the center of an intense national debate in recent years, with opponents of them saying they wrongly honor long-deceased supporters of slavery.

Those who defend preserving the statues, including many historians, argue they shouldn't be destroyed because they can impart important lessons about the ugliness of the past.

As protests over the death of George Floyd continue, preliminary hearings are taking place for Travis McMichael, Greg McMichael and William "Roddie" Bryan Jr. in the shooting death of Ahmaud Arbery.

Gregory and Travis McMichael were arrested May 7 in the February 23 shooting death of Arbery outside of Brunswick. They face murder and aggravated assault charges, according to the Georgia Bureau of Investigation.

Bryan, the man who recorded the fatal shooting of Arbery, was arrested last month on charges including felony murder.

The hearing comes during a week of nationwide protests over another killing — that of Floyd by police in Minneapolis — and demonstrators have also called for justice in Arbery's case.

You can watch live here.