Tens of thousands of people are estimated to have participated in protests across Washington, DC, on Saturday.

The protests were peaceful all day, with no clashes reported with police. No arrests were made today, said a Metropolitan DC Police spokeswoman.

The police department estimated there were at least 6,000 protesters at several locations at noon -- which was before any major events began. Several different protests scattered across the city later drew major crowds.

Earlier in the day, a large group gathered at the Lincoln Memorial. Later, several blocks full of people marched from Capitol Hill past the National Museum of African American History, before heading towards the White House and then to other locations.

At the same time, protests filled blocks going north from Lafayette Park, which has been the center of activity. As evening fell, crowds began to dwindle a little, but protesters still filled several blocks north of the park, which is close to the White House.

People are painting the street with protest slogans such as "Defund the police," said CNN Correspondent Alex Marquadt, reporting from the scene.

"You can see this huge "Black Lives Matter" banner hanging from the fence that was installed earlier this week around the northern edge of Lafayette park. This fence now stretches all the way around, most of the way around the White House," said Marquadt.

He added that previously, often law enforcement would be on the other side of the fence during protests -- but that's not the case tonight, in a reflection of how peaceful recent protests have been.

The Sacramento Police Department has suspended the use of the carotid control hold, according to a tweet from the agency.

The hold is no longer authorized for use within the department and all trainings on the hold have been discontinued, the department said in a series of tweets Saturday.

The department is also revising it's use of force policy to reflect the changes, another tweet said.

The White House wanted to have 10,000 active duty troops on the streets of Washington and other cities earlier this week to quell protesters, but Secretary of Defense Mark Esper and Chairman of the Joint of Chiefs of Staff Gen. Mark Milley pushed back at the idea, according to a senior defense official.

A second defense official said Milley strongly felt the threshold informally described as dire circumstances for calling in active duty troops could not be met, opening the door to whether such a potential presidential order would be legal.

Portland Mayor Ted Wheeler has directed the police chief to no longer use gas to disperse crowds "unless there is a serious and immediate threat to life safety, and there is no other viable alternative for dispersal," he said in a series of tweets Saturday. 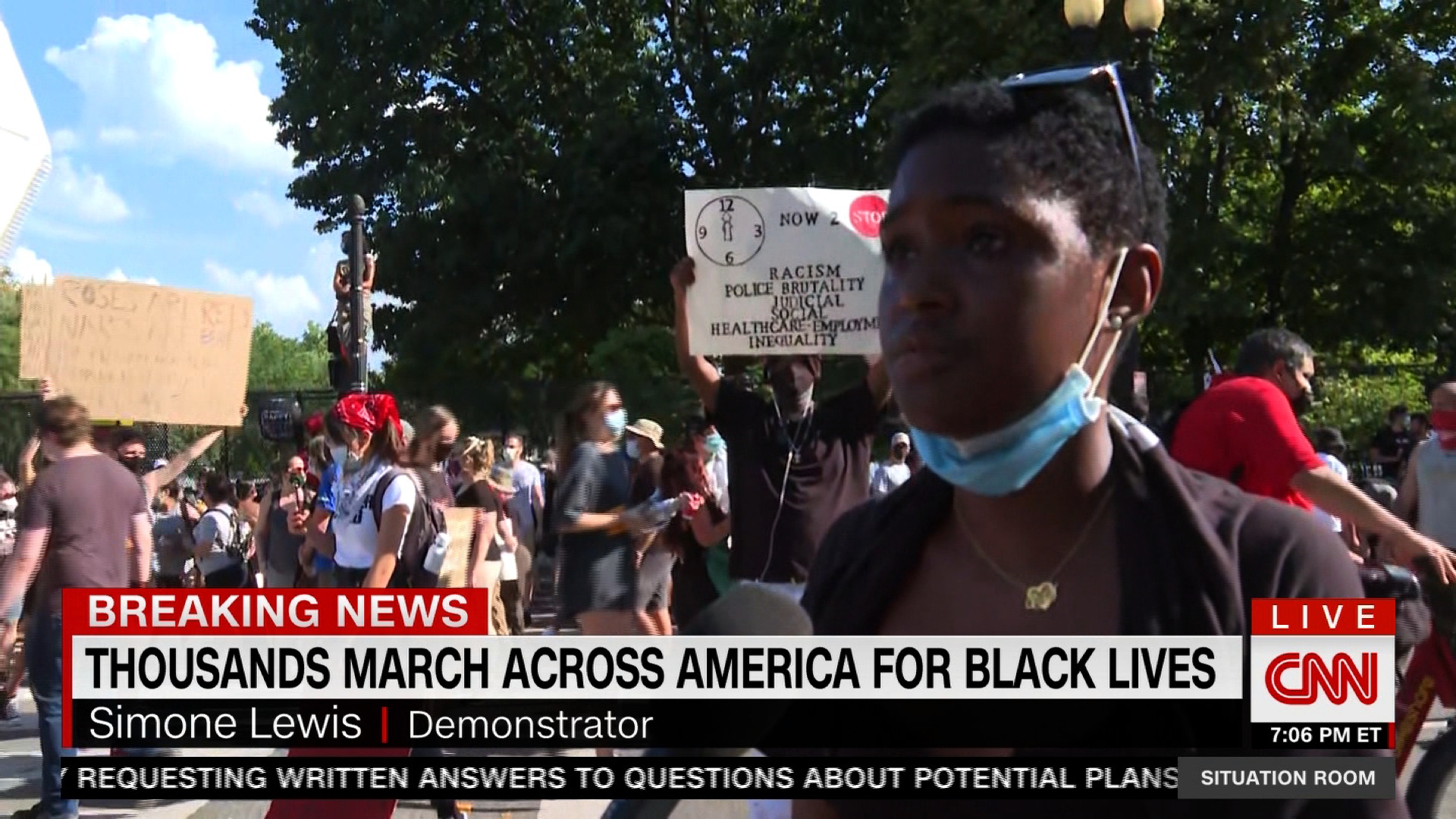 Simone Lewis, a demonstrator in Washington, explained why protesters were in front of the White House Saturday.

This is the White House, this is where we can make noise and show that yes, we actually do want change … If it takes 10 years, I will be out here marching everyday for 10 years,” Lewis said.

“Please go outside, vote in your various states. Please vote, convince your friends to register to vote and all that. Please vote, it matters,” she said.

Doctors from the Centers for Disease Control and Prevention director on down have cautioned demonstrators that crowds provide a perfect opportunity for the coronavirus to spread.

But, after weeks of holing up at home under pandemic lockdown, Jazondre Gibbs was glad to finally have something she could do. She was up early Saturday morning, packing her car and driving with her mom into the center of Washington, DC, so they could set up a table loaded with bags of snacks, water, hand sanitizer and other supplies to hand out to crowds demonstrating after the death of George Floyd.

The pandemic has made us feel kind of helpless,” said Gibbs, a 23-year-old behavioral science consultant.

Sarah Foster also felt the demonstrations were a chance to take action after weeks of passive inaction.

The 36-year-old engineer had walked from her home to join the demonstration.

“So this is finally something we can do, and something important that we can be part of, that we can help solve,” Foster told CNN. “Obviously, people are a little bit closer together than is the recommended six-foot distance, but I think what we are doing is so important. Everyone’s gotten used to finding a way to stay separated.”

Monica Schoch-Spana, a senior scholar of medical anthropology at the Johns Hopkins Center for Health Security, sees the issue of George Floyd’s killing as a crisis pressing enough to bring people out despite their fears about the coronavirus.

“People have been sequestered for a long period of time. And, quite frankly, the majority of people have stuck in there with regard to physical distancing. They have now found a reason to break with that established pattern that has gone on for weeks and weeks and weeks,” Schoch-Spana told CNN.

Numerous people gathered on Berlin's Alexanderplatz for a "silent" demonstration against racism and police violence.

The source said it had not yet been determined whether Floyd would testify in person or virtually. House Judiciary Committee Democrats invited Floyd to speak, this person said.

CNN has reached out to the Committee for details.

ABC News first reported that Floyd would be appearing before Congress.

Floyd said last week he spoke with both President Donald Trump and former Vice President Joe Biden, saying his talk with Trump was "brief" while Biden was talking to him "constantly."

"He didn't give me an opportunity to even speak," Floyd said of his conversation with President Trump.

On Saturday, Brittany Brees, the wife of New Orleans Saints quarterback Drew Brees, posted a statement on Instagram addressing the comments made by her husband about taking a knee during the national anthem.

She commented on the how the couple came to understand the true meaning behind the protests and their lack of knowledge on the issues in the black community.