The Black Lives Matter protests have rippled across the United States and throughout the world.

George Floyd was just one of the many Americans killed by police officers each year. But in other developed countries, such incidents are rare.

Statistical comparisons show that police in the US typically shoot, arrest and imprison more people than similarly developed nations. 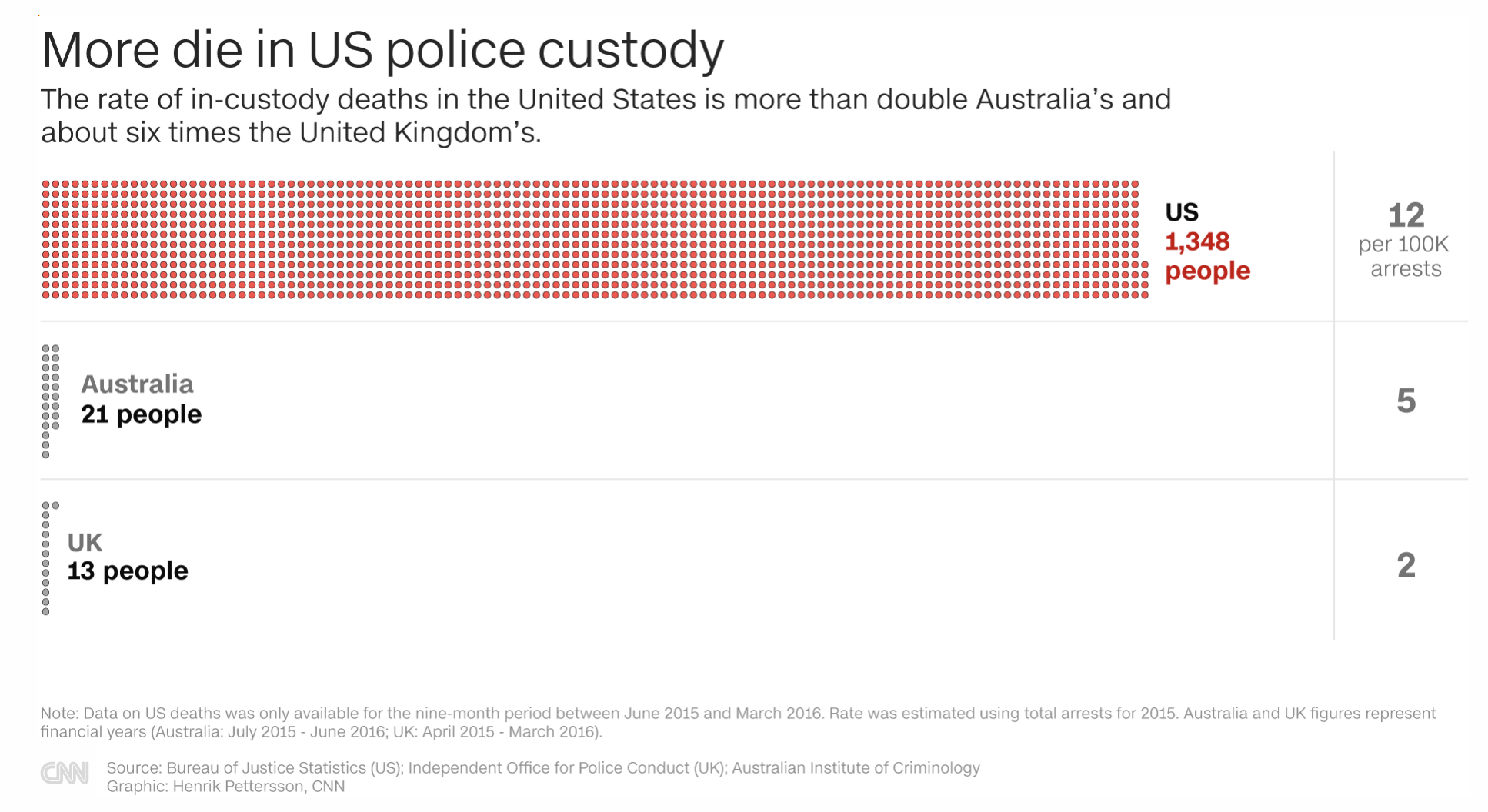 A media review by the Bureau of Justice Statistics (BJS) found a total of 1,348 potential arrest-related deaths in the ten months from June 2015 through March 2016 -- an average of 135 deaths per month, or just over 4 per day.

(The review excludes deaths under the jurisdiction of federal and tribal law enforcement, and the BJS acknowledged it does not provide a complete picture.) 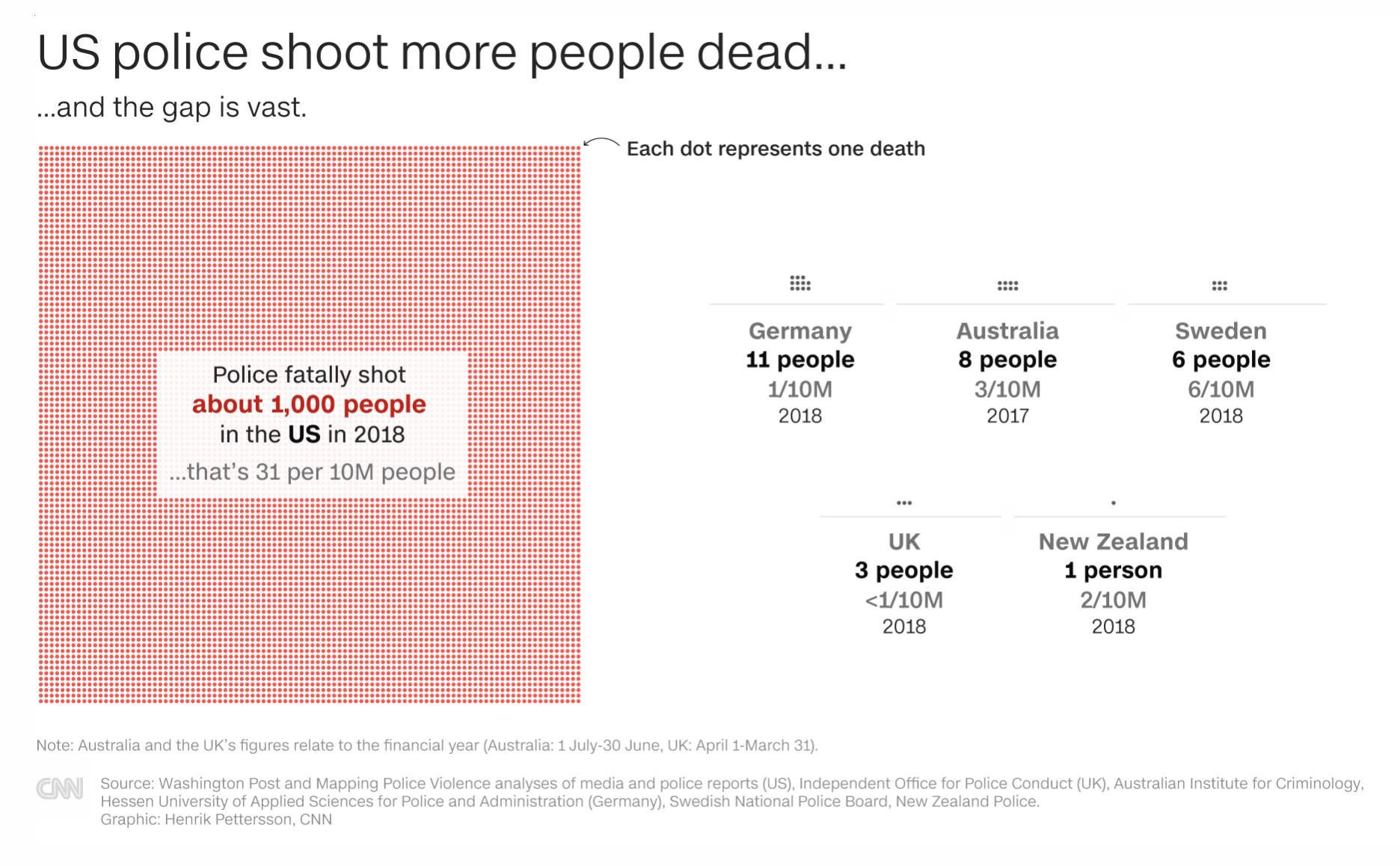 By comparison, only 13 people in the UK died in or following police custody in the closest time period, according to the country's police watchdog. In Australia, 21 deaths occurred in police custody or custody-related operations in 2015/16. Those measures are the most accurate comparison to the US's figure of arrest-related deaths, according to the UK Home Office. The UK's figure does not include every death that occurred following police contact.

The throngs of protesters demanding systemic changes in policing are marching directly into one of the deepest chasms between the two political parties.

The belief that widespread racism is no longer a problem in American society has become one of the core convictions uniting the modern Republican coalition, especially in the Donald Trump era, polls have found.

Several academic studies found the belief that discrimination against minorities (and women) is no longer a problem was a far better predictor of support for Trump in 2016 than economic anxiety.

Democrats of all races, by contrast, are much more likely to say that discrimination against African Americans, including in their interactions with police, remains a structural feature of American society.

In surveys by the nonpartisan Public Religion Research Institute, Americans who support Trump were far more likely than those who don't to say that police shootings of black men are only isolated incidents and to claim that discrimination against whites is now as great a problem as bias against minorities.

This contrast looms heavily over the partisan reaction to the current eruption of protest. Since George Floyd's death, a chorus of prominent conservative voices have insisted it is a "lie" to describe racial discrimination as a pervasive problem.

And, while some polls conducted amid the upsurge of protest hint that more Republicans may see discrimination as a problem, generally the surveys have documented the persistence of a huge gap between the parties on the issue. 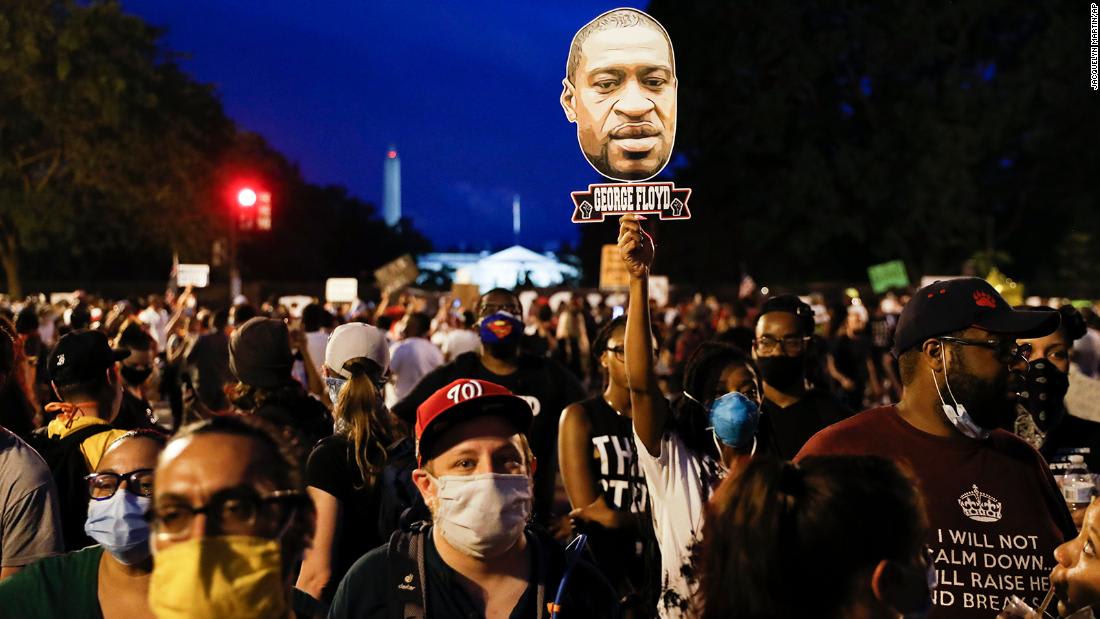 The partisan chasm over 'systemic racism' is on full display

President Donald Trump, appearing badly out of touch with a national outpouring of support for racial justice and shedding political support just five months before the election, is edging toward a belated call for national unity.

But after spending two weeks ripping at racial wounds and painting a picture of a nation under siege from looters, domestic terrorists and radicals, he's probably already missed his chance.

By any standards, Trump is coming off a disastrous political week, but aides told CNN on Sunday that the White House is considering the possibility of a national address to turn things around. His attempt to contain the political damage comes as Democratic presumptive nominee Joe Biden heads to Houston, Texas, on Monday to privately pay his respects to the family of George Floyd, while clearly positioning his 2020 campaign in the slipstream of the anti-racism protests.

Trump has been painting a dire picture of a country teetering on the edge of lawlessness, accusing leftist anti-fascist group Antifa of orchestrating looting and trying to create the appearance of a scenario that only a strongman leader could solve.

In reality, increasingly violence-free nationwide protests with peaceful crowds braving the implications of a pandemic are providing exactly the opposite impression Trump is trying to portray with his dystopian rhetoric.

But Trump's team is beginning to signal a shift that might see the President tone down the rhetoric in a bid to win back independents and moderate suburban Republicans that he needs to win in November.

"I believe you're going to be hearing from the President this week on this topic in some detail. And I would ask you maybe to reserve judgment until after that time," Housing and Urban Development Secretary Ben Carson told Jake Tapper on CNN's "State of the Union." 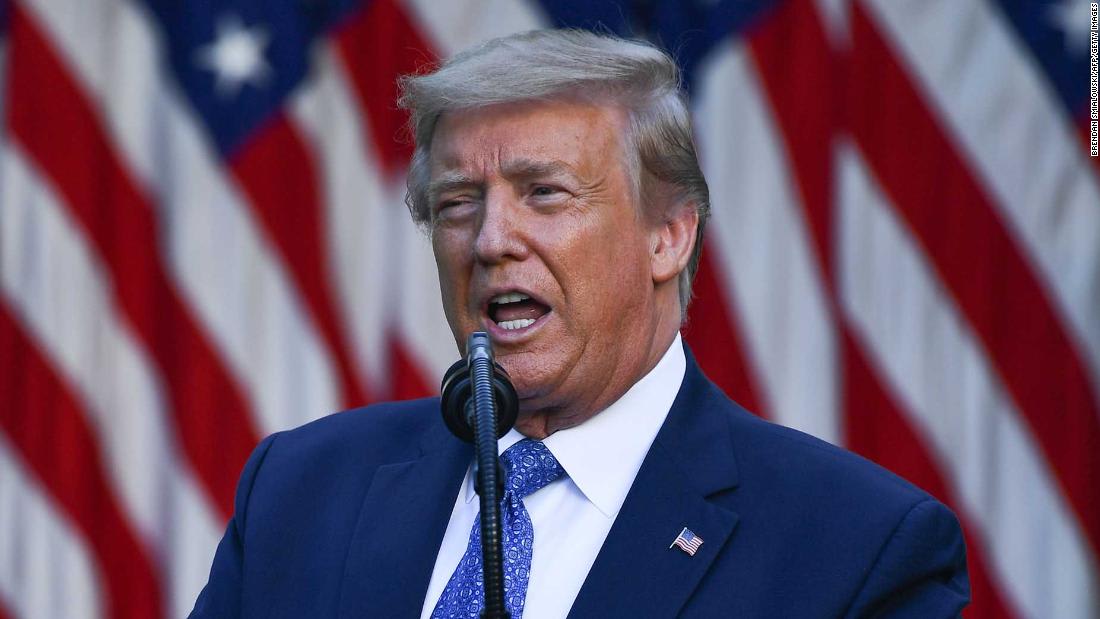 In New York City, the mood was light today after Mayor Bill de Blasio tweeted in the morning that the city’s curfew was lifted, effective immediately.

Protesters still took to the streets; in Williamsburg, Brooklyn, about 4,000 to 5,000 gathered to demonstrate. Things remained peaceful all day, said CNN Correspondent Bill Weir, adding that he had been "listening to police scanners all throughout the day where the word "orderly" was repeated again and again."

People also celebrated news that two NYPD officers have been suspended without pay after using excessive force during the protests, and that the city will move some funding away from the NYPD toward youth and social services.

Meanwhile, in Los Angeles, protesters organized a car caravan rally. Hundreds of people who couldn't participate in the long marches -- the elderly, those with disabilities or pre-existing conditions -- drove their cars together from Compton to the Los Angeles police department headquarters.

Many of them had signs hanging out their window or slogans painted on the side of their cars, like "No justice, no peace" and "Black Lives Matter."

Confronted by an angry mob hurling rocks and death threats, 15-year-old Minnijean Brown-Trickey pushed her way through the crowd, only to be stopped by National Guardsmen.

The year was 1957. And behind the guardsmen stood Little Rock Central High School, which had resisted desegregation since the Supreme Court ruled public school segregation unconstitutional three years earlier.

Brown-Trickey and eight other students, known together as the Little Rock Nine, entered the school weeks later, after President Dwight D. Eisenhower ordered the 101st Airborne Division to escort them. The event proved a pivotal moment in the civil rights movement.

More than 60 years later, as racial tensions grip the nation, Brown-Trickey and other members of the Little Rock Nine question whether their struggles have borne fruit.

"I've just been so sad about whether my life was worth anything because it doesn't seem like things have changed, and I'm sure a lot of people feel that way," Brown-Trickey said from her home in Vancouver, British Columbia. "I got pushed back to Emmett Till, and growing up in Jim Crow, and Central (High School) and being arrested as an environmentalist. Every aspect of my life has just come forward and it's just sorrow."

Other members of the tight-knit Little Rock Nine echoed her sentiments.

"After 78 years of life, in all these years of fighting the same battle, what am I doing? Isn't it supposed to be better than this?" said Melba Patillo Beals from her home in San Francisco.

Read more of their stories and statements here: 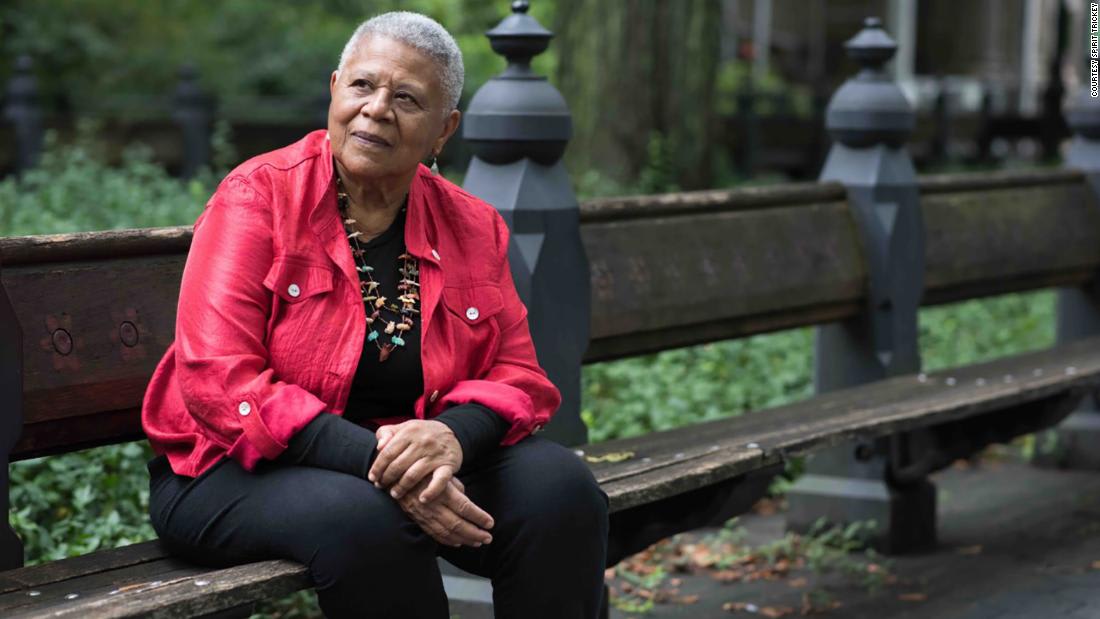 'Isn't it supposed to be better than this?' Civil rights pioneers question how far we've come

"I am extremely proud of the professionalism and dedication to duty the soldiers and airmen of the Cal Guard exemplified on the streets of California protecting the first amendment rights of all citizens during these extremely trying times," California National Guard Adjutant General, Maj. Gen. David Baldwin said.

Cal Guard also said they will maintain a "quick reaction force in various locations across the state to rapidly assist law enforcement if requested."

Police in Austin, Texas, have launched an investigation into why officers fired "less-lethal" beanbag munition at a crowd transporting an injured man.

Justin Howell, a 20-year-old student at Texas State University, was protesting outside police headquarters on the night of May 31, Austin Police Department Chief Brian Manley said in a news conference.

A protester who was standing next to Howell hurled a water bottle and a bag at the police officers, the chief said. In response, one officer fired beanbag rounds at the demonstrator but struck Howell in the head instead, according to Manley.

Once Howell fell to the ground, some in the crowd picked him up and officers directed them to take him to police headquarters -- but the crowd was fired upon as they neared the building, Manley said.

"It's reported that they were fired upon with less-lethal munitions as they brought this victim towards the officers to get him medical help," he added.

Manley said a police investigation into the incident is underway and police are also trying to identify the officer who first fired at Howell.

Thousands of people in Brazil took the streets again this weekend in support of the Black Lives Matter movement and to protest President Jair Bolsonaro's government, including its handling of the coronavirus pandemic.

At the protests, scattered across the country's major cities, people chanted and carried signs bearing slogans like "Black Lives Matter" and "Bolsonaro needs to go."

About 3,000 people attended a rally in Sao Paulo to criticize the federal government and to protest violence against black Brazilians by police forces, said Brazil's Military Police. Protesters lay on the ground, shouting "I can't breathe" -- George Floyd's last words before he died in Minneapolis two weeks ago.

Demonstrations also took place in the country's capital, Brasilia, and other cities like Porto Alegre, Recife and Fortaleza. Protesters on the streets were joined by local residents who banged pans and pots from their balconies, while passing drivers blasted their horns in solidarity.

Raull Santiago, one of the protest organizers in Rio de Janeiro, said on Twitter that leaving home in the middle of a pandemic was a difficult but necessary decision.

“We, the people that live in the favelas, do not accept having as our only option to choose between being shot or [getting] infected by the virus. Today is an important day in the fight against the genocide of black people," he said.

Bolsonaro's response: Last Friday, Bolsonaro condemned participants in anti-government and anti-racism demonstrations as “thugs” and “terrorists,” words also used by his American counterpart, Donald Trump, to describe the protesters in the United States.

He said the demonstrations could draw a violent response from law enforcement and warned Brazilians to stay at home Sunday, “so that the security forces -- not just state but also federal -- can do their duty in case these thugs go beyond the limits of the law. ”

Leadership at the Pittsburgh Post-Gazette newspaper are accused of removing a black journalist from protest coverage after she posted a tweet about looting last Sunday, the Newspaper Guild of Pittsburgh said in a statement.

The paper has also banned others in the newsroom who spoke out against the paper's decision, they said.

"The move stifled one of the few black reporters at the paper," the statement reads.

Alexis Johnson, a journalist at the Post-Gazette, posted a tweet with pictures on May 31st saying, "Horrifying scenes and aftermath from selfish LOOTERS who don't care about this city!!!!! .... oh wait sorry. No, these are pictures from a Kenny Chesney concert tailgate. Whoops."

The pictures accompanying the tweet were of a parking lot at night, covered in trash and debris. The tweet went viral, accruing more than 178,000 likes.

The next morning, Johnson pitched four stories related to the protests to her editor and she was told to hold off, she told CNN.

Later, she got a call from editors saying that her tweet violated social media policy and that she was being pulled off protest coverage.

CNN has reached out to the Pittsburgh Post-Gazette leadership for comment.