Our live coverage of the global George Floyd protests has moved here.

French President Emmanuel Macron met the Prime Minister and other top officials to discuss police brutality and the police force, the Elysée Palace said in a statement on Monday.

"The president has asked the minister of interior to quickly complete the work, begun last January, which consisted in making proposals to improve the ethics of the police," said the press release.

There was a 41% increase in internal investigations for police violence between 2018 and 2019, according to a report released on Sunday by the police force's internal watchdog.

This comes after massive protests last week. On Tuesday, more than 20,000 protesters gathered in front of the main Paris court.

People protested both to show solidarity with the Black Lives Matter movement in the US, and to demand justice for Adama Traoré, a young black French man who died in police custody in Paris four years ago.

These protests have grown across France all week -- but they are banned by authorities, since restrictions are still in place to prevent against the spread of coronavirus.

British Prime Minister Boris Johnson has criticized the actions of some anti-racism protesters on Sunday after clashes with police.

On Twitter, Johnson said the mostly peaceful protests had been "subverted by thuggery."

"People have a right to protest peacefully & while observing social distancing but they have no right to attack the police. These demonstrations have been subverted by thuggery - and they are a betrayal of the cause they purport to serve. Those responsible will be held to account," Johnson tweeted.

The UK’s Home Secretary said on Monday that 14 police officers had been injured.

In the UK city of Bristol, protesters on Sunday pulled down a statue of a 17th-century slave trader while demonstrating in solidarity with the Black Lives Matter movement.

The protesters tied the 5.5-meter (18ft) bronze statue of Edward Colston, with rope before toppling it, to cheers from the surrounding crowd.

Demonstrators were later seen rolling the statue to the nearby harbor and throwing it into the River Avon.

Colston, who was born in Bristol in 1636, was an active member of the governing body of the Royal African Company (RAC) for 11 years, assuming the top role of deputy-governor from 1689–90.

The company, which had a monopoly on the west African slave trade in the late 17th century, was involved in the selling of tens of thousands of west African people in the Caribbean and the Americas.

Colston, who is described by the Museums of Bristol website as a "revered philanthropist / reviled slave trader," later donated some of his wealth to charitable causes, such as schools and hospitals, a process through which his name became synonymous with certain Bristol landmarks.

The statue of Colston had stood in Bristol's city center since 1895 but had become increasingly controversial, with petitions created to demand its removal.

Elsewhere in the UK: Massive protests, with people numbering in the thousands, also took place in other major UK cities like London and Edinburgh.

At least 12 people were arrested at the protests in London, police said late Sunday.

A retired US Navy captain who used derogatory language and racial slurs during a conversation with his wife that was accidentally live streamed on Facebook says he is "mortified."

Scott Bethmann resigned from the US Naval Academy Alumni Association board after he accidentally streamed the conversation with his wife Nancy, according to a statement from the alumni association and a family spokesperson.

Bethmann and his wife were live on Facebook for more than 30 minutes, discussing the ongoing protests around the country, according to audio obtained by CNN affiliate WJXT.

Bethmann is heard using the N-word and complaining about not being able to speak his mind, saying, "The white m*****f*****s can't say anything. That's the point we're making here, Nancy."

His wife is also heard in the recording talking about "F****** Asians from China who love to steal all of our intellectual property."

In a statement issued through a family spokesperson, Bethmann said it was never appropriate "to use derogatory terms when speaking about our fellow man."

"There are no words that can appropriately express how mortified and apologetic my wife and I are about the insensitive things we said that were captured on social media," he said.

NASCAR drivers have joined the growing list of athletes and sports leagues throwing their support behind the nationwide protests against police brutality.

Wallace also tweeted a NASCAR-sponsored video of him and fellow drivers discussing how they will advocate for change to fight racism and inspire change.

"We will listen and learn! #BlackLivesMatters," Wallace tweeted.

Other NASCAR drivers also spoke up Sunday. The legendary Jeff Gordon made a powerful statement during Sunday's broadcast saying he and Wallace's professional and personal journeys are different.

"I'll never know what it's like to walk in Bubba's shoes or the shoes of anyone that's experienced racism. I do know I can be better; we can do better to create positive change," Gordon said. "We need to step up now more than we ever have in the past. We are listening. We are learning. We are ready for change." 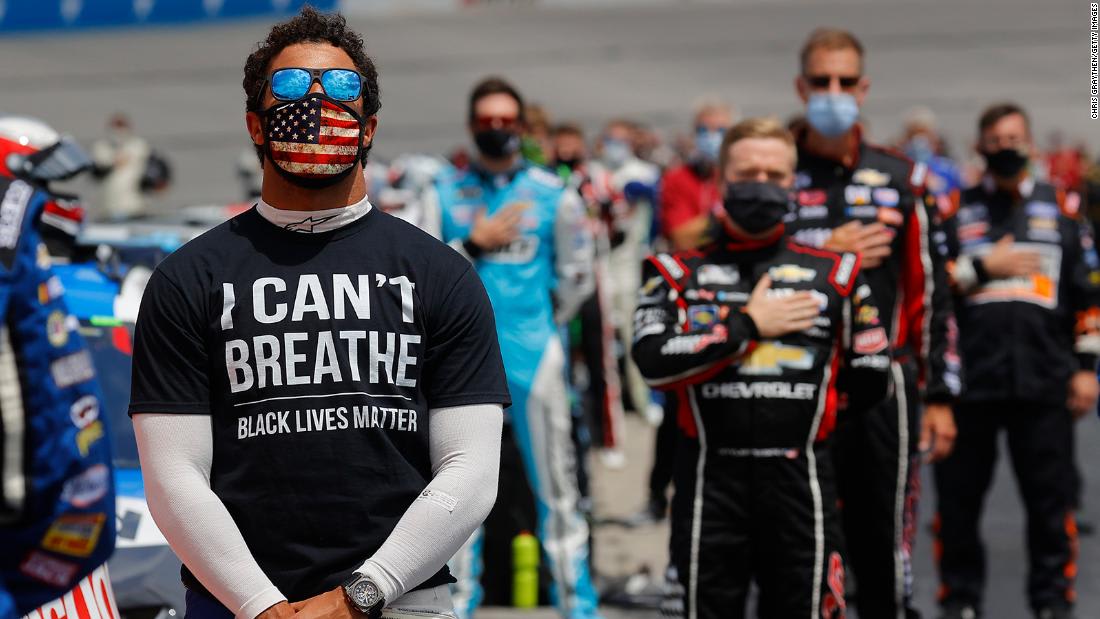 Protesters around the world have been demonstrating all week, inspired by the protests taking place in the United States.

In Rome, thousands of people marched yesterday in the Piazza del Popolo, one of the main squares in the Italian capital.

"This is the largest demonstration I've seen in the Piazza del Popolo for quite some time," said CNN Correspondent Ben Wedeman, reporting from the scene.

"Earlier one of the people making a speech listed all those victims of police brutality in the United States, and this is just one of several such demonstrations being held in Italy and of course across Europe as well. There's been a massive outpouring of solidarity with the Black Lives Matter movement in the United States."

While the large gathering has made it difficult for protesters to adhere to the government’s social distancing guidelines, those demonstrating in the piazza were seen to be attempting to maintain a 1-meter distance between themselves, with many wearing masks and face coverings to limit the spread of coronavirus.