A statue of Christopher Columbus in Richmond's Byrd Park was vandalized, torn down, and thrown in the park's lake on Tuesday night, according to CNN affiliate WTVR.

Protesters marched to the Robert E. Lee monument in Richmond, Virginia on Tuesday. Later, some groups returned and vandalized the statue.

The crowd pulled the statue down with rope and pushed it into the lake, WTVR reported.

Columbus, a 15th-century Italian explorer, is a deeply controversial figure in the United States and held responsible for paving the way for European exploration and colonization of the Americas.

It's not the first time that a statue of him has been vandalized. In 2019 people threw red paint over statues of the explorer in San Francisco and Providence, Rhode Island.

British rapper Wretch 32 has spoken out about police brutality in the country after posting a video of his 62-year-old father being tasered in London.

"This is how the police think they can treat a 62 year old black man in Tottenham but this 1 happens to be my dad #Nojusticenopeace," the rapper, whose real name is Jermaine Scott, wrote on Twitter.

In the clip Scott’s father, Millard Scott, can be seen falling downstairs in a home after an officer says, “police officer with a Taser. Stay where you are.”

The video has been viewed 1.1 million times on social media so far.

Scott gave an interview to UK broadcaster and CNN affiliate ITV News in which he criticized London's police force for its historical use of heavy-handed tactics.

“I grew up in a household with my Dad and my uncle and I have watched them fight against police brutality my whole life," he said.
"I am 35 now and we are still here again today. And I now have to have the same conversations that my dad and my uncle and my grandparents and my parents had with me when I was a child. That means there is no progression.”

A spokesperson for London's Metropolitan Police said: "Officers entered the home to carry out arrest enquiries as part of a long running operation to tackle drugs supply.”

In response to Wretch 32 on Twitter, the police force said “no indication of misconduct has been identified.”

Police officers said they arrested a 22-year-old man inside the house, who was charged with encouraging another to commit an offense.

Officers also arrested a 52-year-old woman at the scene on suspicion of obstructing or resisting a police constable in the execution of duties.

Police departments around the world are moving to ban neck restraints in the aftermath of George Floyd's death and the widespread protests that followed.

Neck restraints, or neck holds, refer to the practice of officers using their arm or leg to restrain someone's neck. The technique has been a subject of controversy for years, particularly following the death of Eric Garner in 2014 after a police officer was accused of choking him.

The term "chokehold" is often used in mainstream discourse to refer to any neck hold, but police generally categorize neck restraints in two ways: the stranglehold and the chokehold. Strangeholds -- also called carotid restraints, sleeper holds or blood chokes -- temporarily cut off blood flow to the brain and are meant to render a subject unconscious for a time. Chokeholds -- also called airway holds -- restrict breathing by applying pressure to the windpipe.

Law enforcement officers say the techniques are used to gain control of aggressive or resisting subjects. Some departments state that they should only be employed as a last resort, when the officer believes the subject poses a threat to their or others' lives. But as the cases of Floyd, Garner and others have shown, neck restraints have the potential to go badly wrong -- sometimes resulting in death.

Hundreds of protesters marched into Seattle's City Hall late Tuesday after a member of the City Council called for the resignation or impeachment of Mayor Jenny Durkan, CNN affiliate KIRO reported.

The event appeared to be peaceful. Protesters left the building around 10:30 p.m. local time, and Seattle Police did not report any arrests.

The councilwoman who led the protesters on their march before they entered the building, Kshama Sawant, began calling for Durkan to step down after police continued to use tear gas to disperse protesters, despite Durkan announcing a 30-day ban on the substance's use. Sawant has also called for the city to defund the police.

In a statement to CNN affiliate KOMO, Durkan's office said the mayor "will not be distracted from the critical work that needs to be done at a moment that Seattle is facing its most challenging time in its history."

"The disparities, health, and economic impacts of the pandemic are an unprecedented challenge. Now we are faced with the pain and trauma relating to the murder of Mr. Floyd and the generations of systemic racism in our city and country that rightfully need to be addressed not through words but action," the statement read.

Thousands gathered in Houston, Texas, Tuesday to bid a final farewell to George Floyd -- the man whose last moments sparked outrage and protests across the country.

In the two weeks since Floyd's death, tens of thousands flooded the streets across the US decrying police brutality and demanding lasting change. Floyd's friends and loved ones say they hope his funeral isn't the end -- but instead marks the beginning of that widespread call for change.

Jonathan Veal, Floyd's longtime friend, told CNN's Don Lemon Tuesday night the two talked about the impact they wanted to make on their world and added Floyd had once said, "I want to touch the world."

"That comment, back in the eleventh grade, was prophetic in nature," Veal said. "He is literally having a global impact."

In the face of continuing demonstrations, city and state leaders have moved to tackle police reform. Members of the Minneapolis City Council announced they intend to defund and dismantle the city's police department. In New York, Gov. Andrew Cuomo says he intends to quickly sign a package of police reform bills legislators are preparing. And across the US, at least 11 cities and municipalities are starting to ban or have banned police officers' use of chokeholds, according to data gathered by CNN.

HBO Max has pulled "Gone with the Wind" from its library of films.

The removal of the film comes as mass protests sweep across the United States following the death of George Floyd, an unarmed black man who was killed while in police custody.

The 1939 film, which tells the love story of Scarlett O'Hara and Rhett Butler during the American Civil War, is considered by many to be a cinematic classic and is one of the most popular films ever made. However, the movie is also incredibly controversial. The film's portrayal of slavery, African Americans and the Civil War South has been received much more critically in the decades since its release.

A spokesperson for HBO Max, which like CNN is owned by WarnerMedia, told CNN Business that "Gone with the Wind" is "a product of its time and depicts some of the ethnic and racial prejudices that have, unfortunately, been commonplace in American society."

"These racist depictions were wrong then and are wrong today, and we felt that to keep this title up without an explanation and a denouncement of those depictions would be irresponsible," the spokesperson said.

The spokesperson added that when the film returns to HBO Max, it "will return with a discussion of its historical context and a denouncement of those very depictions," and will be presented "as it was originally created, because to do otherwise would be the same as claiming these prejudices never existed." 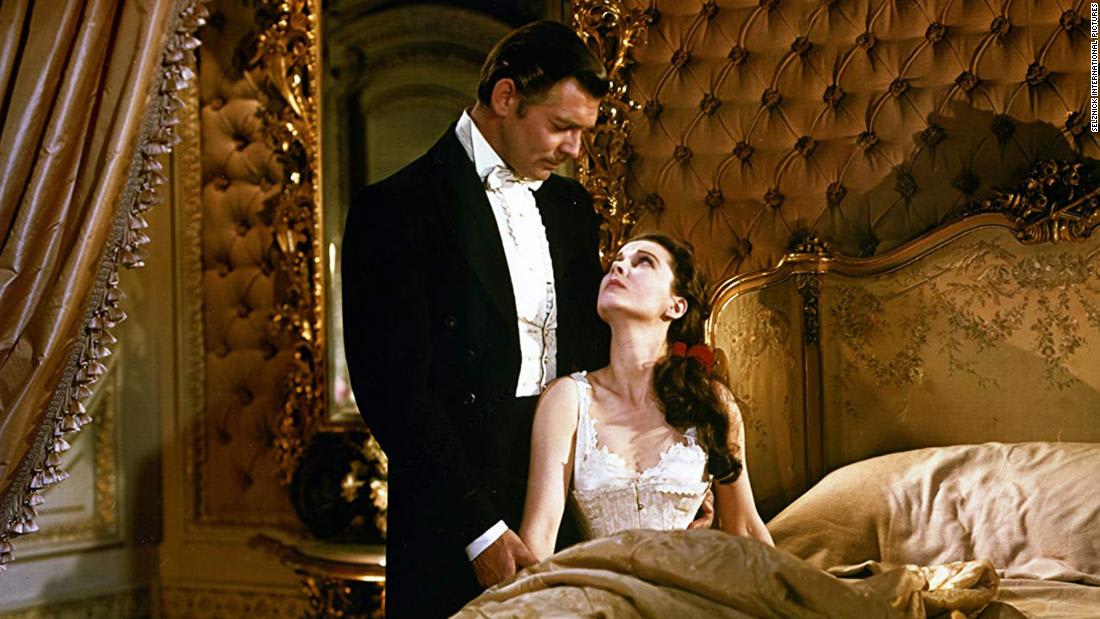 It was only a matter of time before Banksy weighed in.

On Sunday, Black Lives Matter protesters in Bristol, UK, pulled down the bronze statue of 17th-century slave trader Edward Colston, and then dumped the figure into the River Avon. Demonstrators in the estimated 10,000-person gathering cheered, while others called the dramatic act, "mob rule."

The statue has stood in Bristol's city center since 1895 but has become increasingly controversial -- Colston is regarded as both a philanthropist and slave trader -- with petitions created to demand for its removal.

Responding to both critics and supporters of the statue's removal, street artist Banksy, who is believed to be from Bristol, took to Instagram to post a new work on the subject.

But the illustration, which Banksy explained "caters to those who miss the statue and others who don't," makes an alternative proposal for the site: erecting a statue of the protest act itself.

Several young black Americans shared with CNN videos explaining what it's like to grow up in the country today.

"I wish my black life mattered," said Nalia Gomez of New York. "I'm exhausted that I'm constantly fighting to prove my worth."

DeJoiry McKenzie-Simmons of Michigan said "growing up black in America is to be exhausted. Outraged. And constantly defending my identity and my purpose."

Watch more of their responses:

Writing in USA Today, former Vice President Joe Biden said it is imperative leaders throughout the United States seize this moment in order to address racial inequality throughout the country.

"For too long, black Americans have lived with a knee on their neck -- not only institutional violence, but daily injustices like having the police called for sitting in a coffee shop or watching birds in the park," the presumptive Democratic nominee for president said. "We know the nation we want to be. Now we have to deliver on this moment to achieve fundamental changes that address racial inequalities and white supremacy in our country.

Biden also accused President Donald Trump of using "hate-filled, conspiracy-laden rhetoric is inflaming the racial divides in our country" but said the issue of racial justice goes beyond who holds the presidency.

"We need to root out systemic racism across our laws and institutions, and we need to make sure black Americans have a real shot to get ahead," he said.

Defunding the police: In the piece, Biden said he does not support calls to defund the police. Biden said rather than eliminate police departments throughout the country and rethink how public safety works from scratch, he believes "the better answer is to give police departments the resources they need to implement meaningful reforms, and to condition other federal dollars on completing those reforms."

"I’ve long been a firm believer in the power of community policing -- getting cops out of their cruisers and building relationships with the people and the communities they are there to serve and protect," he said.