Our live coverage of the anti-racist protests has moved here.

Four-star General Robert B. Abrams, who commands all US forces in South Korea, has just banned the Confederate Battle Flag or its depiction within USFK work places, public areas, building exteriors, on personnel or on vehicles in a statement released today.

"The Confederate Battle Flag does not represent the values of US Forces assigned to serve in the Republic of Korea", Abrams says in the statement.  Adding, "it has the power to inflame feelings of racial division. We cannot have that division among us."

General Abrams goes on to say that as the senior military officer assigned to Korea, and the Commander of ROK US Combined Forces Command, United Nations Command, and US Forces Korea, "it is within my authority and responsibility to take reasonable, necessary and lawful measures to protect people...to ensure good."

The statement says that effective immediately, all commanders are directed to identify and ensure the removal or display of the Confederate Battle Flag.

The black man seen carrying an injured white man to safety during a chaotic scene at protests in the UK capital London on Saturday told CNN he did it to avoid catastrophe.

The image of Patrick Hutchinson's selfless act has now spread across the globe. Hutchinson told CNN Sunday it was the first Black Lives Matter protest he attended, and he helped the white man because he didn't want the main reason for the protests to be lost in one moment of violence.

Protesters in London and all over the world have taken to the streets calling for police reform after the deaths of black people at the hands of police. These deaths most recently include George Floyd in Minneapolis and Rayshard Brooks in Atlanta.

"My real focus was on avoiding a catastrophe, all of a sudden the narrative changes into 'Black Lives Matters, Youngsters Kill Protesters.' That was the message we were trying to avoid," Hutchinson said.

Black transgender activist Raquel Willis stood on the deck of the Brooklyn Museum on Sunday and led thousands of protesters in a chant.

Sunday's protest also took place amid global demonstrations in support of the Black Lives Matter movement, which has surged in the wake of George Floyd's death.

It also followed the Trump administration's announcement that it is eliminating an Obama-era regulation prohibiting discrimination in health care against patients who are transgender. 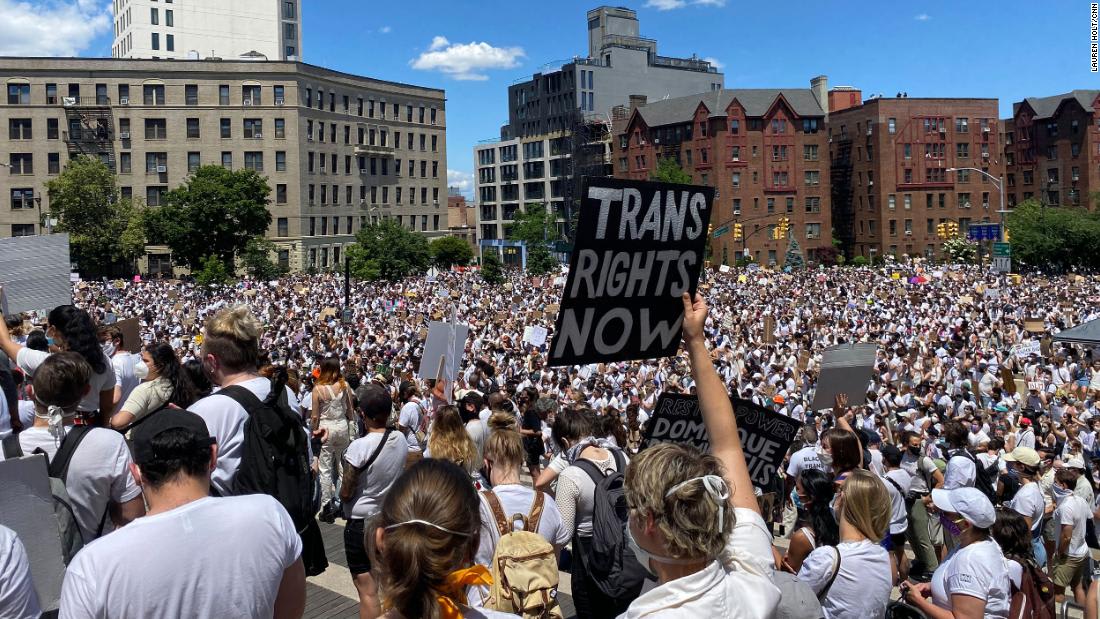 Thousands show up for black trans people in nationwide protests

A video of the protest went viral on Twitter Saturday and shows Terrel Tuosto of West Hempstead, a nearby town on Long Island, walking alongside Nassau County police officers.

Tuosto is told repeatedly by officers to “move to the side” of the street and he responds, “we’ve got this whole street.” Officers are seen in the video again telling Tuosto and other protesters to remain on the southbound side of the street, and Tuosto responds, “I have the right to walk where I want to walk.”

Tuosto continues to walk before an officer appears to stop abruptly in front of him, causing Tuosto to bump into the officer.

The officers are then seen restraining Tuosto and shoving him into the ground, the video shows. Protesters can be heard on the video yelling at police officers, defending Tuosto by saying he isn’t resisting arrest.

A press release from Nassau County Executive Laura Curran and Police Commissioner Patrick Ryder said three protesters were arrested for disorderly conduct and said that police repeatedly made attempts to keep protesters away from moving lanes of traffic.

“This safety precaution was met with strong opposition and resistance which resulted in the arrests of these subjects,” the release said, adding that the arrests come after days of peaceful protests with very few arrests.

Ryder also provided an emailed statement to CNN, in which he said the county police “has provided security for thousands of people at over 80 mostly peaceful protests over the past two weeks.” He also said in the statement that the department supports free speech.

Tuosto confirmed to CNN that he is the person in the video and said he sustained injuries to his knee -- which had recently been operated on -- as well as his back and neck. He claims officers held him down with a knee on both his back and his neck. Officers charged him with disorderly conduct, Tuosto said.

“They treat me as a criminal but I am not a criminal,” Tuosto said. “They tried to scare us, intimidate us, discourage us. That’s not going to work.”

In case you missed it earlier, San Francisco Mayor London Breed discussed reducing funding in the Police Department on CNN's town hall on race. Though the idea has been around for years, it's received growing support in recent weeks.

With the deaths of George Floyd and Breonna Taylor at the hands of police and nationwide protests demanding reform, Minneapolis officials have announced their intent to defund and disband the city's police force altogether.

Following on from that, Breed said that officials in San Francisco did make an announcement that they were going to reduce funding in the Police Department and redirect that money specifically to the African American community.

"This does not necessarily mean we are going to completely defund the Police Department. It means that we need to look at ways in which we can reduce the amount of resources that we are providing to the Department, redirect those funds to the African American community in San Francisco for better outcomes."

When asked by a viewer how she navigates her leadership role alongside stereotypes often imposed on African-American women, Washington Mayor Muriel Bowser said that she and the other mayors who joined CNN's Town Hall need to "move forward together without all of the bravado and ego that sometimes comes in politics."

"I think all of the women here will tell that you that women in leadership are questioned more frequently, more fervently and often more wrongly than our male counterparts," she said. "What we bring to leadership often times are not just big ideas, but a pragmatism to get things done and to really listen to our communities, use our best judgment, and move forward together without all of the bravado and ego that sometimes comes in politics.

Mayor Breed: "We roll up our sleeves and get to work": San Francisco Mayor London Breed said the four mayors who joined CNN are all trying to lead and take care of their constituents in "an absence of federal leadership," an apparent dig at President Donald Trump's decision not embrace the role of a national unifier, as many of his predecessors have done.

"I grew up in public housing ... I grew up in poverty, raised by my grandmother. I've had a family member killed by police here in San Francisco," she said. "I'm a mayor, but I'm a black woman first because I have to remind people in San Francisco, with a less than 6% African-American population, that I come from the struggle of African-Americans. And that pain is rooted in who we are, and we are finally seeing something extraordinary, something different, and we want to make sure that this movement, what we see around these protests, amounts to something different.

In a preview of an interview airing Monday on CBS This Morning, Tomika Miller, the wife of Rayshard Brooks says she wants the officers to go to jail.

When speaking of her husband, Miller said, “Rayshard Brooks is everybody. Just like George is everybody. We are all the people, we are all God’s children.”

“We should feel the pain of those who lost their life to senselessness over authority being taken way overboard,” she said.

Miller’s interview will air on Monday on CBS This Morning.

An autopsy report released on Sunday by the Fulton County Medical Examiner’s Office said Brooks was shot twice in the back.

The report says that he died from organ damage and blood loss from the two gunshot wounds.

Ami Relf, a resident of Bellwood, Illinois, lost her brother Reginald to Covid-19. He was 50 years old, and he was turned away from an urgent care facility before he died.

"Decades of research show blacks receive inferior medical care to white patients. Also, blacks are suspicious and skeptical of the medical field," she said. "What policies or programs have been implemented to ensure we are not denied and shut out, but are believed and heard and will ultimately receive quality health care?"

During the early days of the pandemic, Breed said public officials put together an "equity team" that focused on outreach and education in communities unlikely to have access to good healthcare or testing -- she mentioned by name the Tenderloin and Bay View-Hunter's Point.

She said they provided educational resources in multiple languages and food for those who lost their jobs and may not have been eligible for unemployment benefits.

"The work that we did from the very beginning centered around equity and making sure that people like Reginald had access to resources, and I am sorry in this case that the system failed him, and we have to do better because unfortunately, this is a real challenge around the country -- access to healthcare, especially for African-Americans," she said.