Smith also said the intention is to have members of families of police violence victims attend the signing, though Smith said he did not want to get “ahead” of the President on invitees who may or may not attend.

A Black Lives Matter banner was displayed outside the US embassy in Seoul, South Korea.

"The U.S. Embassy stands in solidarity with fellow Americans grieving and peacefully protesting to demand positive change," a spokesperson for the embassy said in a tweet.

"Our #BlackLivesMatter banner shows our support for the fight against racial injustice and police brutality as we strive to be a more inclusive & just society."

Harry Harris, the US ambassador to South Korea, retweeted the post.

"I believe in what President JFK said on June 10, 1963 at American University: 'If we cannot now end our differences, at least we can help make the world safe for diversity.' USA is a free & diverse nation...from that diversity we gain our strength," Harris wrote.

Protests prompted by the death of George Floyd have swept around the US and the world in recent weeks. Here's what you need to know:

Rayshard Brooks' wife speaks out: Tomika Miller told CBS' This Morning that she wanted the officers involved in Brooks' death to go to jail. Brooks was shot by a police officer on Friday night.

UNHRC organizes police brutality debate: The United Nations Human Rights Council will hold the urgent debate on Wednesday, in Geneva. The debate will include discussions on "systematic racism, police brutality and violence against peaceful protests."

After a number of stars in Germany's Bundesliga voiced their support for the Black Lives Matter (BLM) movement over recent weeks, Real Madrid's Brazilian international Marcelo made his own individual act of solidarity during a match on Sunday.

With Real 2-0 up against Eibar, Marcelo netted Los Blancos' third goal and celebrated by kneeling and raising his fist.

Both actions echoed those of past athletes' protests.

While playing for the San Francisco 49ers, former NFL star Colin Kaepernick knelt during the US national anthem to protest police brutality against African Americans.

Olympic medal winners John Carlos and Tommie Smith raised their fists on the podium at the 1968 Olympic Games in Mexico City during the US national anthem.

The gesture has been adopted many times since, and many have raised their fists during the Black Lives Matter protests in the aftermath of George Floyd's death.

Its decision follows weeks of worldwide protests prompted by the death of George Floyd. According to the Swedish mission in Geneva, the African Group -- comprised of 54 member states from the African continent -- requested the debate,

The UNHCR will resume its 43rd regular session from June 15 to 19 in Geneva. The session was suspended on March 13, because of Covid-19.

A video of the protest that went viral on Twitter Saturday shows Terrel Tuosto of West Hempstead, a nearby town on Long Island, walking alongside Nassau County police officers.

Officers repeatedly tell Tuosto to "move to the side" of the street and he responds, "we've got this whole street."

Officers tell Tuosto and other protesters again to remain on the southbound side of the street.

Tuosto responds, "I have the right to walk where I want to walk," and continues to walk before an officer appears to stop abruptly in front of him, causing Tuosto to bump into the officer.

Officers are then seen restraining Tuosto and shoving him into the ground. Meanwhile, protesters can be heard yelling at police officers, defending Tuosto by saying he isn't resisting arrest.

Just days after George Floyd was buried in Houston, and as nationwide demonstrations against racism and police brutality continued, another black man was killed by police -- this time in Atlanta.

Rayshard Brooks, 27, was shot twice in the back, the Fulton County Medical Examiner's Office said. His death was ruled a homicide.

Rayshard Brooks is everybody. Just like George is everybody. We are all the people, we are all God's children," Brooks' wife, Tomika Miller, told CBS This Morning. "We should feel the pain of those who lost their life to senselessness over authority being taken way overboard."

Miller says she wants the officers involved in Brooks' death to go to jail.

Police responded to a call Friday night about a man sleeping in a vehicle at a Wendy's drive-thru and began talking with Brooks. Authorities say he failed a sobriety test and one of the officers attempted to arrest him, which led to a struggle between Brooks and two police officers, according to footage of the incident.

A video shows Brooks took an officer's Taser during the struggle, and pointed it at one of the officers as he ran away. That officer then shot Brooks three times, authorities said.

In 1939, Billie Holiday released "Strange Fruit," a powerful protest song that stunned listeners with its horrifying depiction of black lynchings.

More than 80 years later, anti-blackness is still as prevalent as ever and has inspired a new generation of protest songs.

From stars like Trey Songz to younger talents such as 12-year-old Keedron Bryant, musicians are adding their voices to the global outrage over the police killing of George Floyd and are calling for racial justice.

Here are some of the new protest songs demanding change: 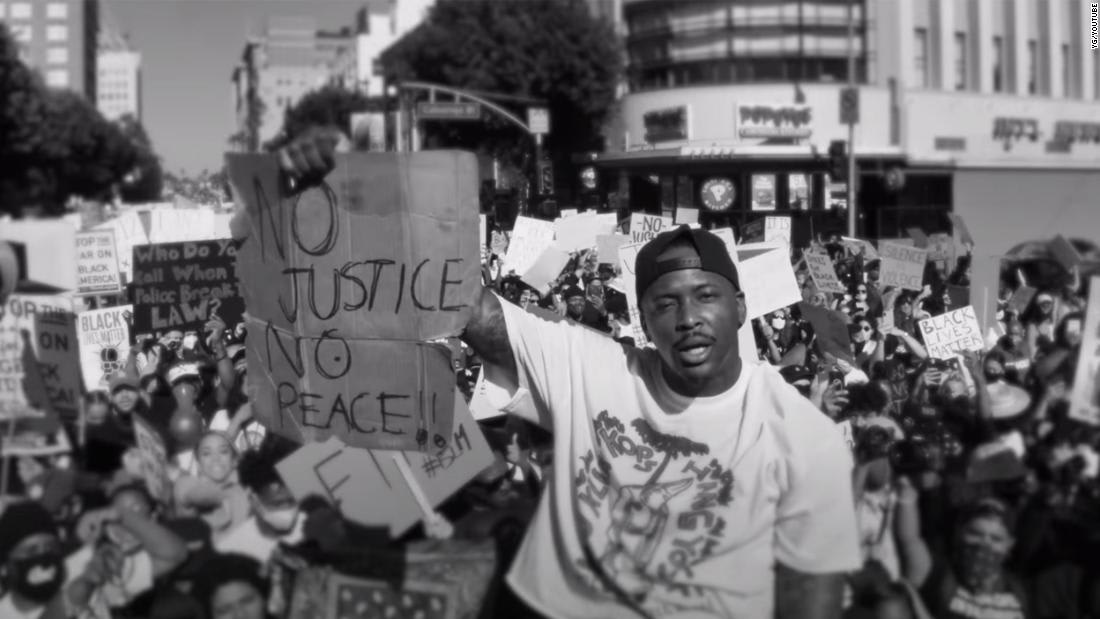 The protests sweeping the United States after George Floyd's death have brought echoes of the civil rights movement of the 1950s and 1960s, when activists led marches and staged lunch counter sit-ins and integrated bus rides to demand equal rights for African Americans.

To gain a better understanding of how those historic events inform our present moment, CNN reached out to young men and women of that time -- brave activists better known as the Freedom Riders, the Little Rock Nine and members of the Atlanta Student Movement.

Now in their 70s and 80s, these pioneers tell us how things have changed in the fight for equality -- and how much farther we need to go.

"It's not that things have gotten so much worse (now). It's just it is so much more obvious and apparent to everybody," said Charles Black, a leader of the 1960s Atlanta Student Movement.

"It's a miracle that anybody could survive with a knee on your neck that's been on there for over 400 years," said Miller Green, one of the Freedom Riders.

"You've never seen as many white people marching (as now) -- never in history. We've been carrying this burden by ourselves, and you feel, they say, (like you are) carrying the cross. You feel like the cross is a little lighter today because you see other people carrying the cross with you."

"In Birmingham, when they turned dogs and water hoses on us, it was just as barbaric then as it is now. You see a bunch of racist cops with nightsticks and stun guns and beating people for no reason, unprovoked. Racism hasn't changed. It's just been exposed," said Alphonso Petway, one of the Freedom Riders.

Hear more from civil rights protesters on the struggle then and today: 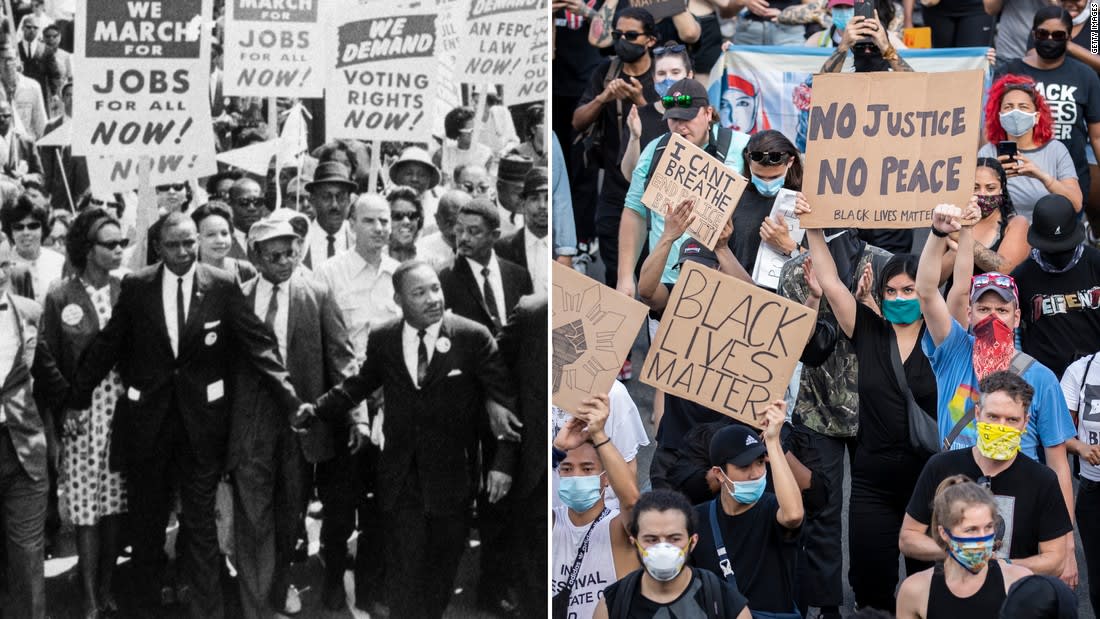