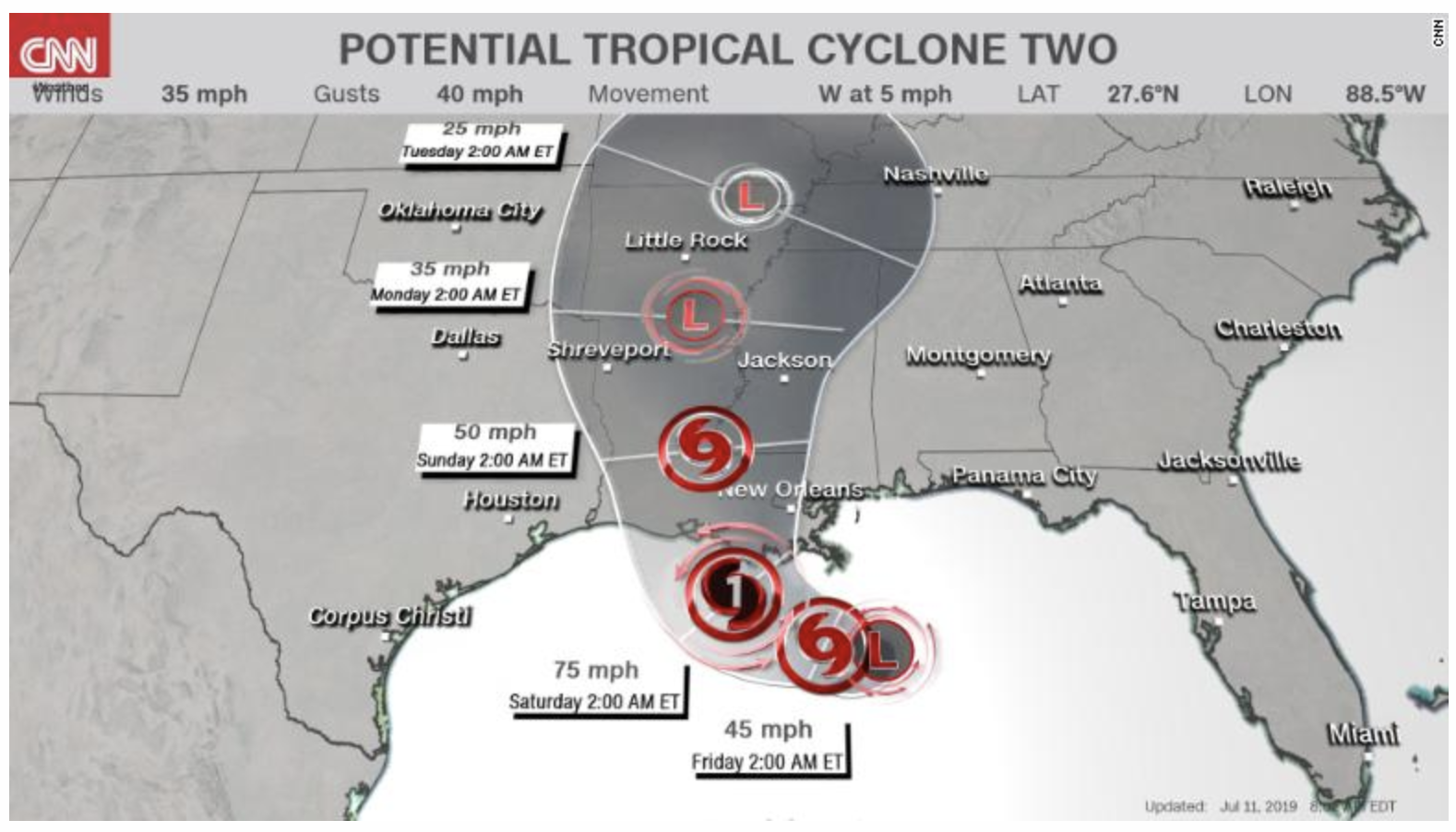 As of late Thursday afternoon, Tropical Storm Barry was hurling winds of 40 mph in the Gulf of Mexico, but it's expected to continue to intensify, the National Hurricane Center said.

We're wrapping up our live coverage for the night, but we'll be back tomorrow. Here's what we know about the storm:

As a dangerous weather system spinning toward the Gulf coast intensified Thursday to become Tropical Storm Barry, some Louisiana residents aren't taking any chances and are choosing to evacuate. Others say they plan to ride the storm out.

Heather Cafarella, 41, a bartender at R Bar, said people aren't panicked, but they are asking each other if they're going to evacuate.

"It's not just the hurricane. We flood when there's heavy rain. It doesn't take much, unfortunately," she said Thursday.

Looking outside at the sunny street, Cafarella said, "The calm before the storm is so deceiving."

He is renting a scooter, but it got stuck in a flood and isn't starting. James is worried about the storm and about having to pay the rental company for the damaged vehicle. He's crashing on friends' couches at the moment.

Jefferson Parish President Michael Yenni said the parish pumped so much water that they could fill up an Olympic-sized swimming pool in two seconds.

Yenni said they could fill up 242 million, 5-gallon water bottles in an hour with the amount of water they pumped.

The pumps were running at 99.3% on Wednesday.

The National Guard has been activated and buses have been staged in three Louisiana cities ahead of the tropical storm, the governor said.

The state has activated 3,000 members of the National Guard as result of the storm, he said.

The entire city's drainage system operates under a pump system. He said he’s been told to expect 15 to 20 inches of rain in Morgan City.

“We can handle the first 5 inches, but after that, we can pump one inch per hour," the mayor told CNN. "If we get rain greater than that it will exceed our capacity to pump it out,”

Grizzaffi continued: “We’re buckled down. Three days ago, I wouldn’t get out of my recliner with the forecast."

He went on to say a "big rain" is coming to Morgan City.

“The doom and gloom has shifted," Grizzaffi said.

The Mississippi River is not expected to overtop the river levee based on current forecast models, Louisiana Gov. John Bel Edwards said Thursday.

The governor said the National Weather Service and the Army Corps of Engineers informed his office about the river levee.

Why this matters: Barry will inundate Louisiana at a terrible time — when rivers like the Mississippi are already flooded. Unusually high river levels from severe flooding this year could lead to an unprecedented challenge when Barry makes landfall.

In New Orleans, the Mississippi River was more than 16 feet deep on Thursday. At this time of year, it should be more like 6 to 8 feet, said Jeffrey Graschel, a hydrologist with the National Weather Service's Lower Mississippi River Forecast Center.

An aircraft with the National Oceanic and Atmospheric Administration flew through Tropical Storm Barry today.

A photo taken inside the aircraft shows a flight crew receiving a briefing before its mission.

One thing to note: Barry remains a 40-mph tropical storm, but it is expected to continue to intensify, with a landfall expected sometime on Saturday morning along the Louisiana coast, likely west of New Orleans.

Renowned chef José Andrés' nonprofit announced Thursday that they were on the ground in Lafayette and New Orleans and setting up kitchens in response to Tropical Storm Barry.

His team at World Central Kitchen tweeted that it was preparing to respond to the storm.

About Andrés' team: They have served millions of free meals to needy Americans after natural disasters like Hurricane Maria and the California wildfires. The team also fed federal government workers who were furloughed or working without pay during the 35-day partial shutdown in January.